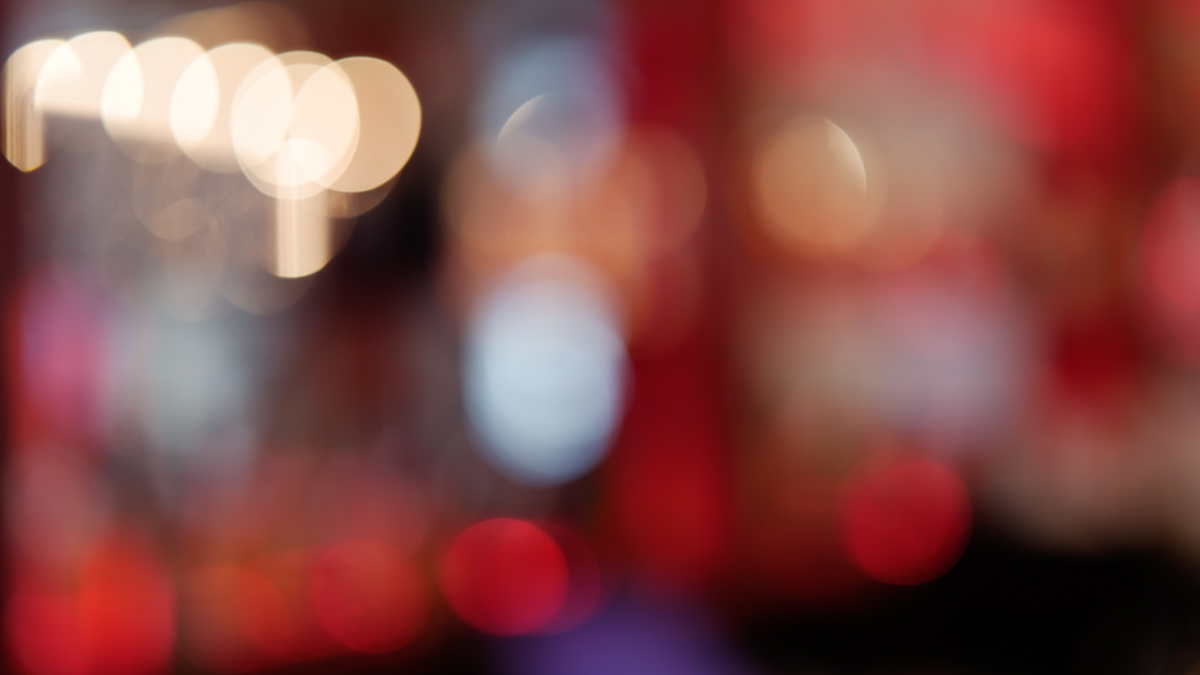 Panasonic is launching three new lenses for the new full-frame S system. These will become part of a complete lens range from Panasonic in the coming years. The brightest of the three is the Panasonic Lumix S PRO 50 mm f/1.4. This is a lens that is no longer your regular standard lens but a fixed focal length lens that you bring out when you want to get the highest quality from your camera. The Panasonic Lumix S PRO 50 mm f/1.4 offers the best that the LUMIX S series has to offer, for bokeh, sharpness and capabilities. 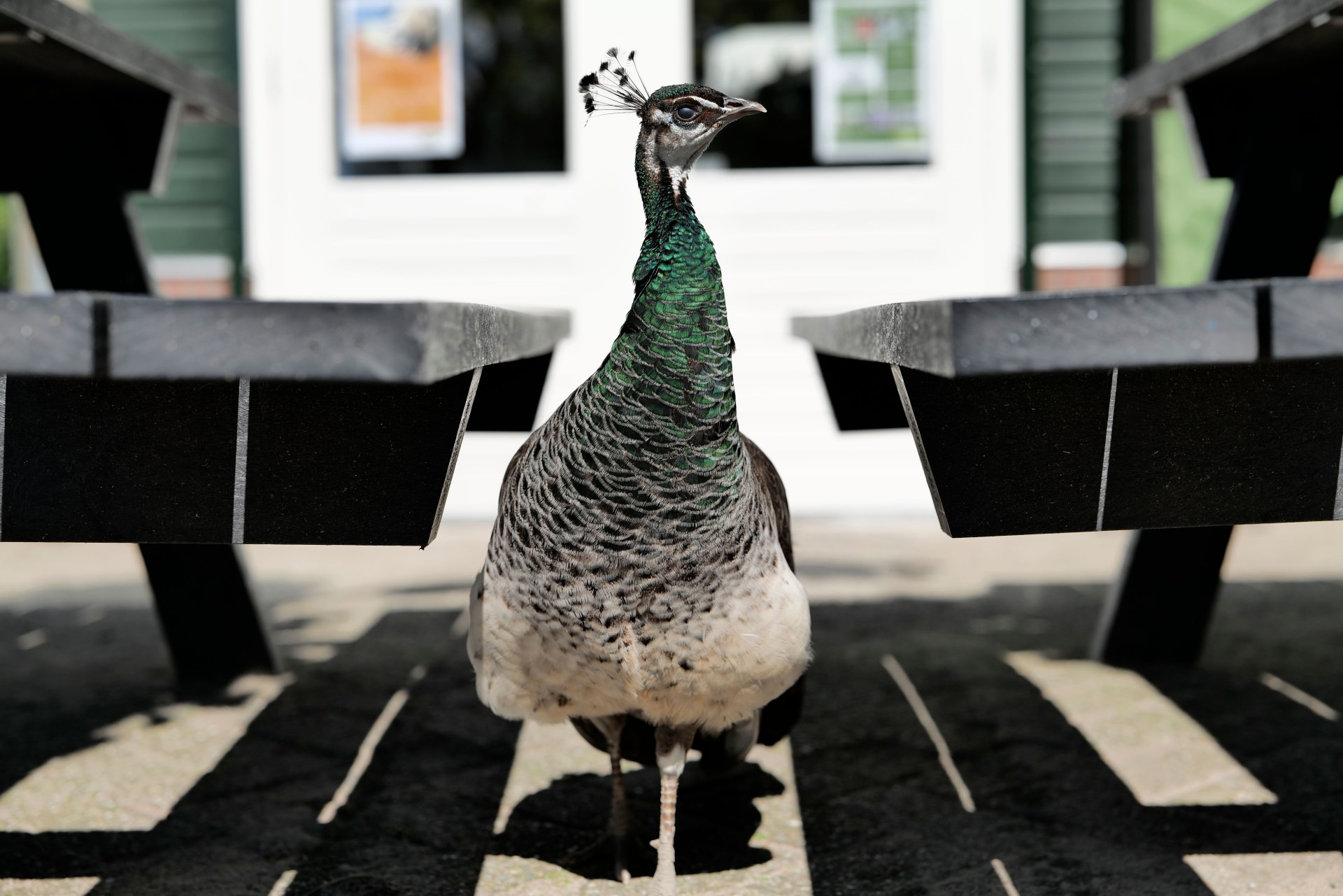 The Panasonic Lumix S PRO 50 mm f1.4 is a standard lens. From a technical point of view, this means that the focal point of the lens roughly corresponds to the diagonal of the sensor. In practice, it means that the field of view is close to what we perceive more or less in focus with our eyes. A standard lens does not have a wide-angle or telephoto effect but displays everything about as we experience it ourselves. Some people find that boring; for others, it is an advantage because it allows you to fully capture your own vision in the image. Standard lenses used to be bright, compact and affordable, and for many photographers, it was the first lens they bought with their camera. Times have changed, as Bob Dylan would say. Today, standard lenses are still bright, but often very big, heavy and expensive. See for example the new Canon RF 50 mm f/1.2L. The Lumix S PRO 50 mm f1.4 also fits comfortably into this last category. With a suggested retail price of just under € 2500.00, this is not a purchase that you will make without a second thought. The dimensions and the price also create very high expectations in terms of image quality. 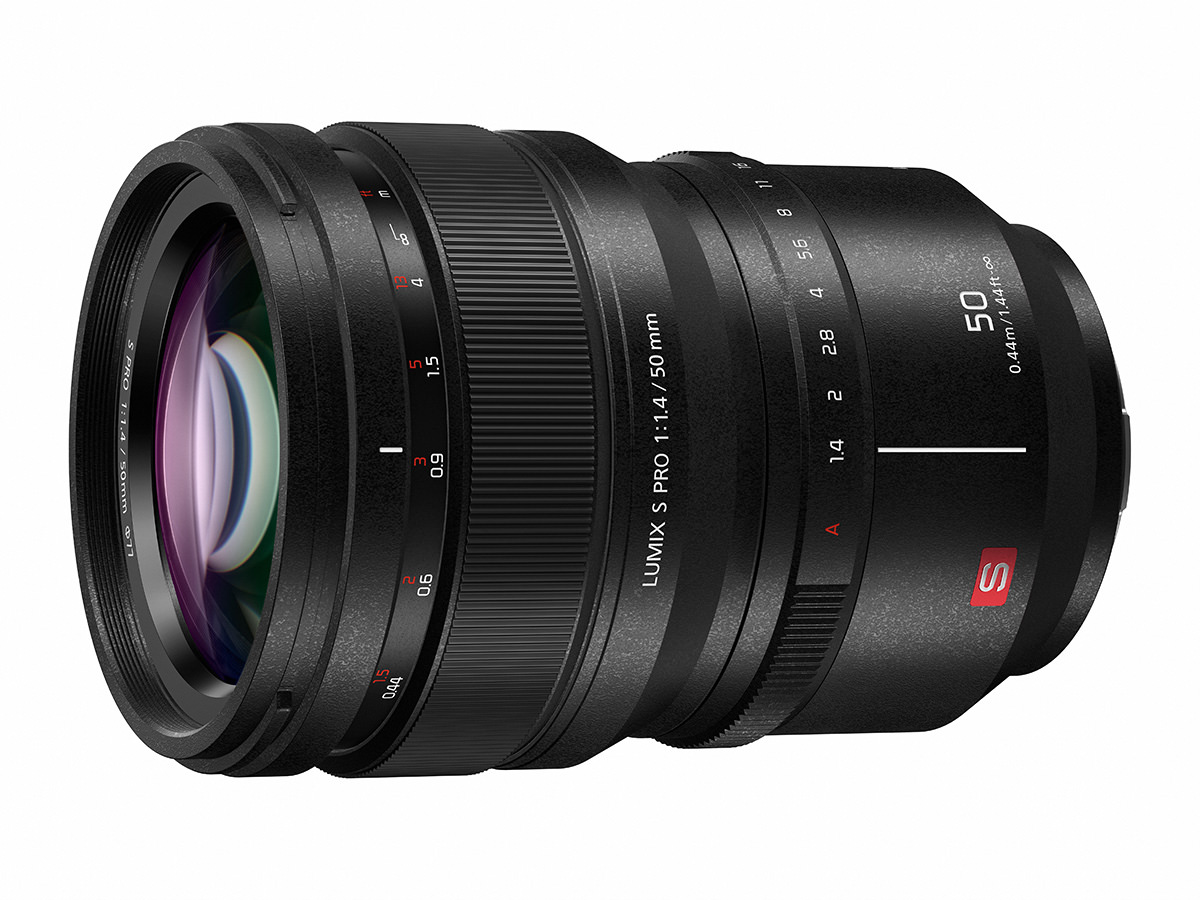 The Panasonic Lumix S PRO 50 mm f1.4 is a very sturdy lens, in several respects. It is big and heavy for a standard lens. These days, unfortunately, this is the rule rather than the exception. Zeiss has set the trend in this area with the Otus series, and that example has since been widely followed. Apparently, you need these dimensions and this amount of glass if you want to make good lenses for sensors that have 40 megapixels and more. The lens is 13 cm. long, 9 centimeters thick and weighs just under a kilo at 955 grams. In combination with one of the Lumix S cameras, you are then holding two kilos. The Panasonic Lumix S PRO 50 mm F1.4 is also literally sturdy. Everything feels like it was made to last a very long time. The optical design, together with the 11-blade aperture, should ensure beautifully smooth focus transitions and a beautiful bokeh. The lens design consists of 13 elements in 11 groups with two aspherical and three extra-low dispersion lens elements. The lens is extensively fitted with gaskets to keep dust and moisture out. 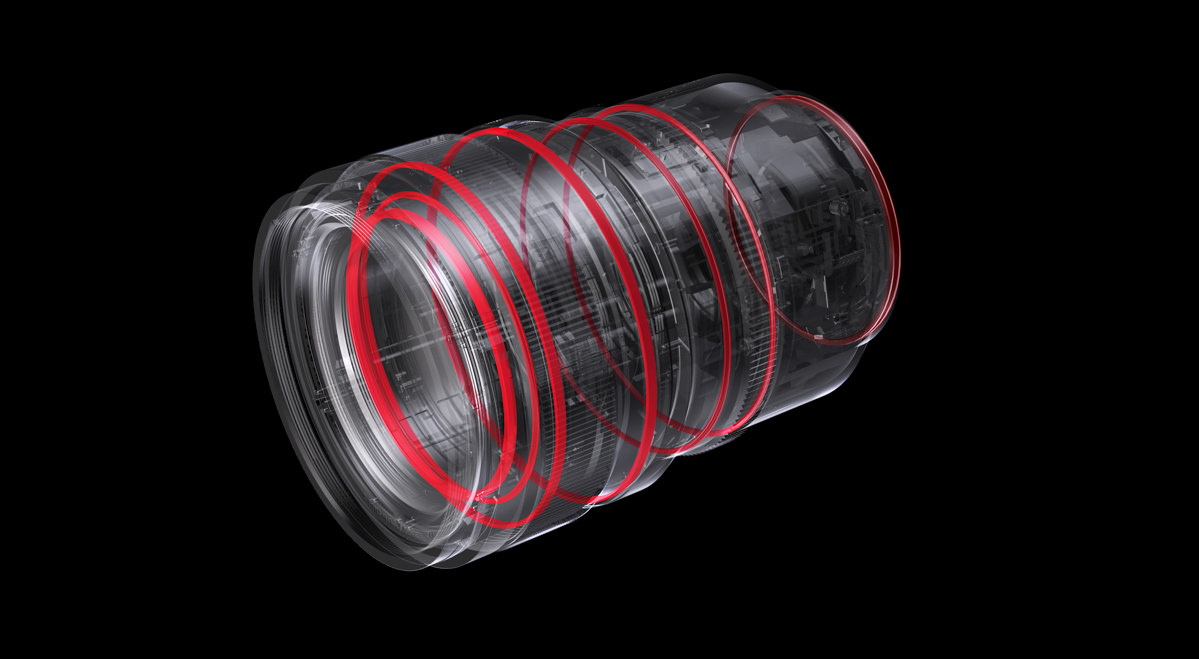 The lens has its own aperture ring that clicks in very perceptibly. The ring can also be set to the A-position so that you can simply operate the diaphragm via a control dial on the camera, if you prefer. What is a missed opportunity is that you cannot give the aperture ring on the lens a different function in that case. Also, you cannot fix the ring in the A-position, and that is a shame. If you turn the ring by accident, then you are suddenly on f/2.8 for example, while you might have set the aperture to f/8 via the camera. If you set the ring back to A, the aperture does not go back to f/8 then, but to f/1.4. You then have to use the control wheel again to return to the aperture that you want. It’s a small point, but something that could have been more useful. The other ring on the lens, the focus ring, turns beautifully smooth and muted. The ring has two extras that are fairly unique. First, you can program the ring, or rather: the manual focus, for linear and non-linear focus. In the latter case, you can focus with a longer stroke if you turn the ring more slowly. This provides extra accuracy. For videographers or photographers who want to work manually but also quickly, it’s not so great. The camera can therefore set the ring to control the AF motor linearly. That means that the stroke from close to infinity is always the same. This is something that should be standard on every camera with a focus-by-wire system. The Panasonic Lumix S PRO 50 mm f1.4 offers another alternative, and that’s the “focus clutch.” By pulling the focus ring backwards, you can easily switch from AF to MF. You also see a distance scale, so you can quickly set a hyperfocal distance for street photography, for example. And you get stops at infinity and close by, so you feel when you have reached the end of the focus stroke. The focus ring will still rotate but won’t change the focus.

The Panasonic Lumix S PRO 50 mm f1.4 scores very well on vignetting. A maximum of one stop in RAW is good. What is noticeable is that the value does not decrease quickly and that you actually stop down to f/4 before the vignetting decreases in uncorrected RAW files. Then we’re talking about 2/3 of a stop. Not really anything to worry about, but it does mean that this lens will always have some vignetting unless you correct it. This happens automatically in the JPEG files and usually also in the RAWs if you use a conventional RAW converter that recognizes the camera and lens and immediately applies the correct profiles. That correction is then at the expense of the dynamic range in the corners. The good news is that there is not much to be corrected and that you therefore have very little loss. You could actually turn off the correction for vignetting with this lens. A small amount of vignetting can also be very beautiful in a photo.

While vignetting is very limited, the distortion is not. Almost 4.5% barrel distortion in RAW is excessive. The camera immediately corrects that in the live view image and in the shots that you take with this lens, but such a correction comes at the expense of image quality. Theoretically at least. That is because pixels have to be moved and recalculated, and a file doesn’t benefit from that. You would think that you should see that in lower resolution in the corners. But that’s hardly the case with this lens. That’s a spoiler for the section on image quality (see below). This may have to do with a conscious design choice. If you don’t have to take the distortion into account in the design, you may be able to increase the sharpness so much that the end result after correction is better than when you optically optimize both. At any rate, you see nothing of the distortion in the photos, and the sharpness is excellent. What more can you ask for? 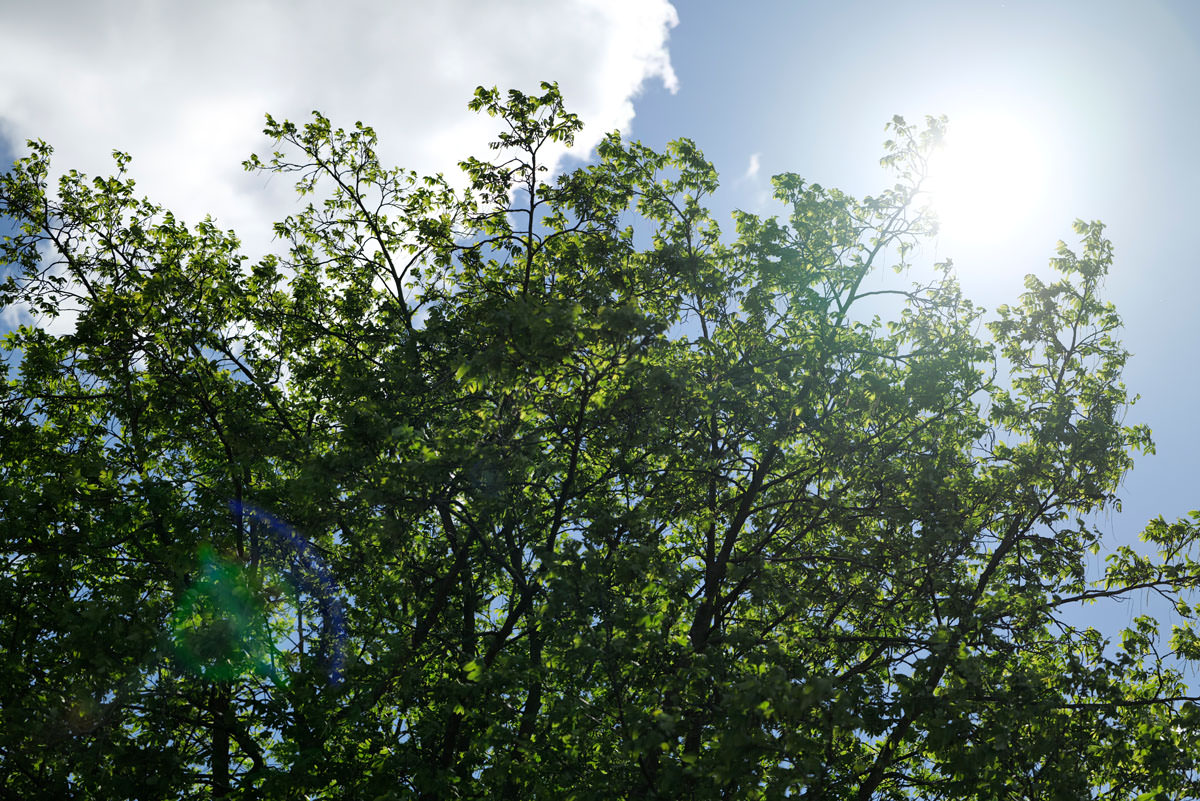 In fact, the only thing you have to be a bit careful about with this 50 mm is flare. With the sun fully in frame, it’s possible to get some vague, soft ghosts. The shot above is pretty much the worst we’ve been able to make. If you turn the camera slightly, it will quickly decrease. But the Panasonic Lumix S PRO 50 mm f1.4 is thus somewhat sensitive to backlight.

The Panasonic Lumix S PRO 50 mm f1.4 scores very well in terms of sharpness and is clearly not impressed by the 47-megapixel sensor of the Panasonic Lumix S1R. The corners score barely lower than the center, and that’s a sign that the optical design of this lens is good. It scores even better than the Canon RF 50 mm f/1.2 L USM, which we tested in December. The Canon is slightly brighter, and the Canon RF 50 mm f/1.2L USM has been tested on a body with considerably fewer pixels than the Panasonic. It’s therefore logical that it scores slightly lower. But the fact that the Panasonic Lumix S PRO 50 mm f1.4 is so beautifully even on a camera with so many pixels does show how good it is. Getting high values on a 24- or 30-megapixel body is easier than on a nearly 50-megapixel camera. This result is even more impressive when you consider how much the files have to be recalculated to get rid of the distortion. You would expect deteriorated corners as a result, but there’s not much of that to see. That’s an impressive achievement. Of course, it’s fair to expect that from a 50 mm f/1.4 with these dimensions. 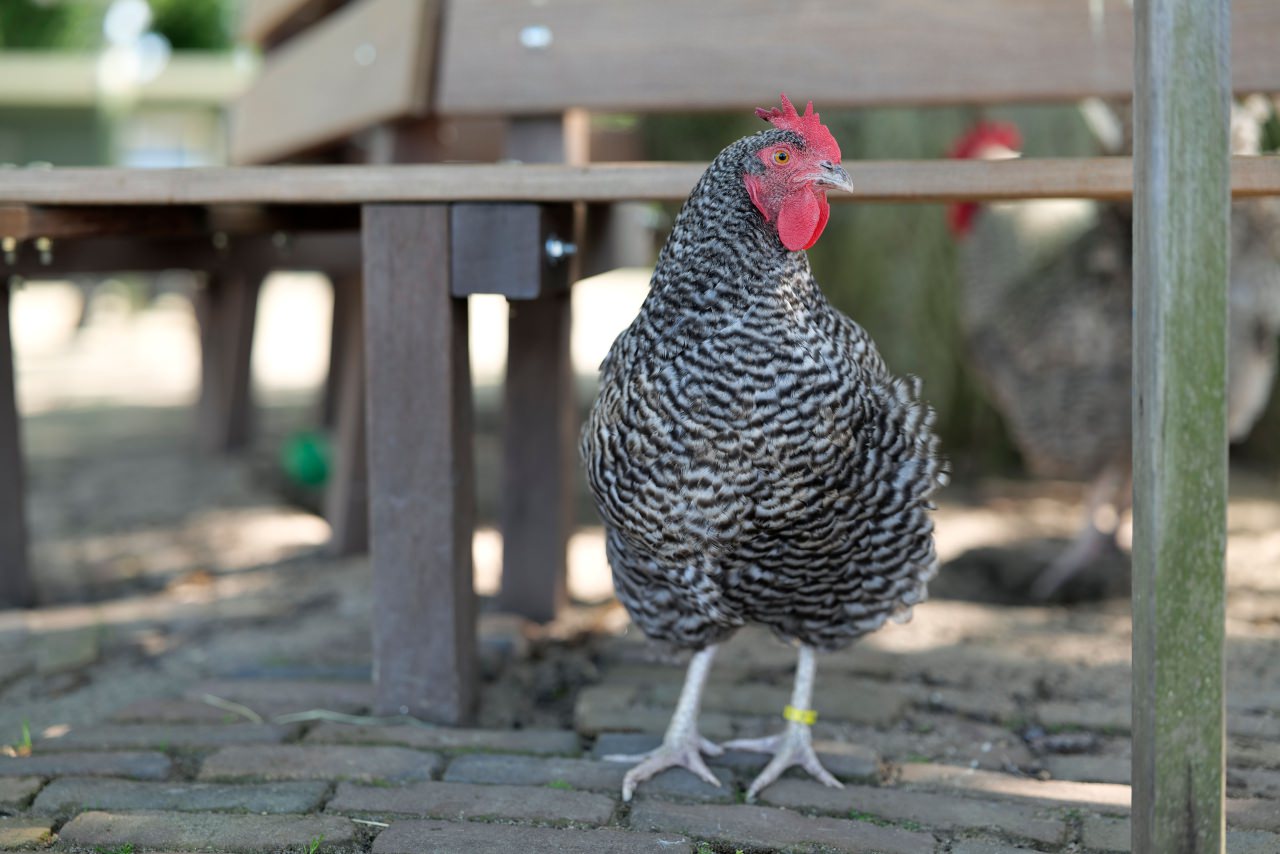 The LUMIX S lenses are designed to suppress focus breathing and therefore also to perform well when used for video recording. In combination with the linear manual focus or manual focus via the focus clutch function of the lens, this means that you can use this lens very well for shots where the focus is shifted during filming. Because the Panasonic Lumix S PRO 50 mm f1.4 does not suffer from focus breathing, the size of your subject on which you have focused does not change. Not even if you shift the focus to something that is further away or closer.

Curious about the performance of the Panasonic Lumix S PRO 50 mm f1.4 in practice? Click on the button below and visit our renewed web gallery with sample images. The images can be downloaded in full resolution to be viewed at 100%.

The Panasonic Lumix S PRO 50 mm f/1.4 is big, heavy and expensive, but also completely fulfills all its promises on image quality.

The Panasonic Lumix S PRO 50 mm f/1.4 is a fantastically good lens. You don’t expect anything else from a standard lens that weighs nearly one kilo and for the amount that Panasonic asks for it. But the lens also fully delivers on its promises. The image quality is really excellent, and the build quality is just as good. Add to that the extra options such as the aperture ring, the focus clutch and the linear focus, and you get something unique. This is not a lens for everyone, just because of the price. It’s a lens for the true enthusiast who is looking for maximum quality.