The latest Samsung system camera is called NX300. It has the 20 megapixel APS-C sensor of the NX200 but with a number of new functionalities that make it into a really new camera: fold-out screen, touch screen, hybrid AF system, Wi-Fi, NFC and (if using the right lens) 3D option!
We reviewed the NX300 in a spotless white version, with white strap, white push-up flash and ditto Samsung NX 18-55 kit lens. Dazzling and very fashionable, keep in mind that magic is lost after a while for some. For this body we also got a black telephoto zoom (Samsung 50-200 mm) and a Samsung 45 mm 3D lens. Enough material for days of very intensive test work. 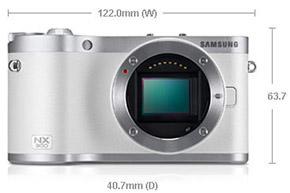 Construction and ease of use

We said it already: the camera looks slick, sleekly shaped and with all the buttons on top and back. It has a huge (84 mm) LCD screen, although this is not completely used as a viewfinder: It is a touch screen and it needs some space on the sides for icons and buttons. You could describe it as a hybrid control: almost all functions can accessed via both the touch screen and the buttons or menus. The only exception is the so-called tracking Autofocus, for which you need to use the touch screen. The screen gets dingy over time; you need to clean it regularly. It can fold 90 degrees up and 45 degrees down, but not turn. As a result, the functionality as a folding screen is somewhat limited.
The connections for HDMI and mini-USB sit behind a neat little hatch on the side, the battery and the SD card are accessed through a door in the bottom. This door is enough far away from the tripod mount, so even with the camera on tripod you can switch the card or battery. We say that not for nothing, because the NX300 is both a memory and a battery eater. That is partly due to the very large files.
Unique to Samsung is the i-function system, where the distance ring of the lens (which you’ll rarely use for distance setting) can be employed for other self-chosen functions. 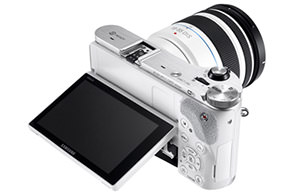 You would expect the system cameras with Four Thirds sensor (e.g. Panasonic or Olympus) also to be direct competitors for the NX300, even though the sensor is half the size. The super small Nikon 1 is a picture to see, and is also very fast, but which we regard more as a compact camera than as a system camera for the demanding photographer.

Of course the NX300 can also work in RAW, and for the RAW conversion Samsung delivers Adobe Lighroom 4 free. This excellent digital asset management and image editing program, that costs about a hundred euro if purchased separately, can certainly be a reason to choose this body. Be warned: the included version does not run on Windows XP.

The NX300 features a panorama function. We don’t like gimmicks, scene setups and artificial finishing treatments, but for the panorama-sweep, we make an exception. That’s just terribly fun and convenient, especially since you can sweep both horizontally and vertically and also in the portrait mode. We find it equally useful that for the bracketing modes (exposure bracketing, white balance, picture style) the camera makes the whole series with 1 press of a button, and that with a gap of 0.2 seconds. Thus, you’ll get so all shots with virtually the same framing, and you can’t forget to shoot the steps fully.

With the HDR option, you make two pictures with different exposure that are automatically processed into 1 picture. They’re really individual photos; you hear the shutter click 2x. With the very slight time difference between the two shots, you don’t have to use a tripod. You get a JPEG picture with a somewhat lower quality. You have to weigh that against the trouble of ‘cutting’ the ends of your histogram. In our experience, with the dynamic range of modern sensors, shooting multiple images only really makes sense in exceptional cases. It almost always suffices to do a sensible post processing of a properly exposed RAW file.

The color reproduction in the practice shots is on the warm side.In the ‘burst’ mode the camera makes 30 pictures within 3 seconds. It does that with the electronic shutter. Thereby you get considerable distortion, the so-called ‘rolling shutter’ effect. The sensor reads the pixels out from top to bottom and in the meantime, the object has already moved. This truck is photographed with 1/3200 second and seems to lean back.

The AF is fabulously fast

The autofocus of the NX300 is fabulously fast. In our default test in which we measure the time the camera needs to focus from 10 meters to 1 meter, we came up with about 30 milliseconds. The shutter lag also breaks records: When you first focus (shutter half-press) the shutter opens within 20 milliseconds. No other camera that we’ve so far had in our hands did that so quickly.
The secret is the so-called hybrid focus: the is contrast detection AF like we are used to on mirrorless cameras, but there are also certain pixels on the sensor ‘dedicated AF-pixels’ that, in sufficient light, provide focusing via phase detection. On how that works exactly we will soon publish a separate article on this site; for now we simply present these measurement results. The technique is not unique to Samsung (e.g. Fuji knows it too), but the NX300 is the speed champion.
It’s very useful that you can indicate the AF point on the touch screen (if you choose to use the touch screen because you don’t have to). If you choose the ‘tracking AF’-option, then the focus point follows the subject. This works well for non-fast-moving subjects. With, for example, passing cars it doesn’t work because the touch screen responds with some delay, the subject is already gone before the AF point ‘grabs’. Following the subject happens on color information, so the tracking field shoots to the upper-left corner of the given field of color (see picture at right).If you choose Manual Focus, then you have two focus helpers: firstly, a zoom feature whereby a part of the image is enlarged to 8x, and further a color helper, whereby parts that are sharp get a colored shadow. The MF itself works electronically (‘focus by wire’) and feels what rubbery. But it works perfectly.

On top of the Samsung NX300 there is a direct link button, enabling you to store images on your mobile phone. This is possible after you’ve installed the free Samsung Smart camera app on your smartphone. In addition, the Samsung NX300 has a special WiFi position on the PASM button on top of the camera . If you put the camera in this mode, a new world opens up to you. You can share your images straight from the camera on social media like Facebook . You can also use your smartphone as a remote control for your camera. You see what the camera sees and can use the phone to shoot an image. This is useful if you are using the Samsung NX300 in combination with a photo mast, for example. However, I saw no option to adjust shutter speed or aperture via the smartphone. You can also connect teh Samsung NX 300 to a wireless network at home.  If you have installed the software on your PC, you can shoot anywhere in the house, where the captured images are saved directly on your hard drive. 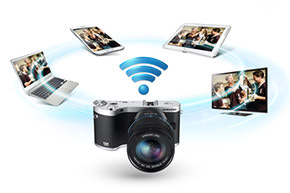 NFC ( Near Field Communication) is very useful. This is a standard for smartphones , which allows you to share information, without all the hassle of passwords. Making contact between the Samsung NX300 and my Samsung smartphone was indeed flawless. To protect you against unwanted vistors, NFC only works if you keep the two devices (almost) against each other.
In the Brittish Museum you can shoot anywhere and the artworks have an NFC sign. Keep your camera at the sign after you have taken a picture, and all information about that artwork is on your camera. Convenient, right? Unfortunately we had no budget for a visit to London, to see if the British Museum also includes a GPS coordinate.  Is there anyone of our readers soon the British museum? Would you then hold your smartphone or your Samsung camera against such a sign and tell us what happens?

The resolution (sharpness) of the Samsung NX300 is particularly at lower ISO values ​​good. De Samsung NX 300 scores as well as much more expensive SLRs . The dynamic range is good, a relief if you are used to a compact camera. Still there are competitors with an APS-C sensor (especially Fujifilm ) who score better on this point. The images below were shot using the Samsung 18-55 mm (left image), and the Samsung 50-200mm telephoto zoom at 200 mm (right image). You can count the grass.

The noise performances of the Samsung NX300 are very good. Certainly so taking into account the large ISO range (up to 25,600). Up to and including ISO 400 you see no noise. At higher ISOs that comes slowly, and it’s really visible from 6400. The noise reduction can be set at different levels but always remains at an acceptable level, so the color reproduction is not strongly shifted. On the images, you see the reproduction at ISO 400 at the top and that at ISO 25,600 without noise reduction below. This is a crop of about a quarter of the total image (1337 pixels on the longest side). Here the APS-C sensor is an advantage over the Four Thirds sensor of competing models in the same price class. Those exhibit almost always more noise. 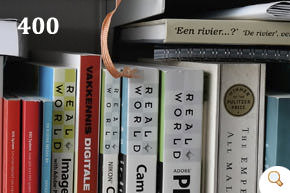 As in our previous review of Samsung NX 1000, we are very pleased with the color reproduction of the Samsung NX 300. The sample pictures of the NX300 are beautiful saturated and color temperature appeared inclined sometimes to the warm side. In the measurements it’s apparent that the red color is indeed more saturated than the blue colors (click on the image below left). Many consumers find this color reproduction pleasant; it namely gives more attractive skin tones. Of course, through the white balance settings you can make adjustments, if desired you can set the white balance completely by hand. Compared to the Samsung NX 1000, the colors under tungsten were even more saturated, as you can see in the image at the bottom right, making the score for color reproduction of the NX 300 just slightly lower than the NX 1000. 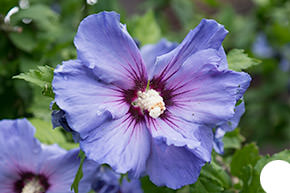 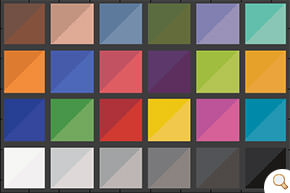 All in all, we found the Samsung NX300 a pleasant camera. Samsung has come out of nowhere as a camera manufacturer, and it’s admirable that they can deliver technologically advanced products that compare with any of the existing superpowers. For the Samsung NX300, the autofocus, the high image speed and low shutter lag really stand out. The built-in Wi-Fi and the touch screen, especially for the users who make the transition from the smartphone to a ‘real’ camera are, of course, essential. Additionally, the NX mount has a reasonable number of lenses available (including the 3D 45 mm-lens that we’ll come back to later). The price is very reasonable for this model.