The Venus Laowa 12mm f/2.8 Zero-D is a compact and bright wide angle with an extreme field of view and three fairly unique features: it is almost distortion-free (“Zero-Distortion”), you can use filters on it, and a shift adapter is available with which you can use it as a 17mm f/4 shift lens on a Sony A7 or A9. With the adapter, you thus actually have two lenses in one.

The Laowa 12mm f/2.8 Zero-D is a unique lens, available for Nikon and Canon SLRs. To begin with, it’s a 12-mm lens. The field of view is therefore enormous. You can do unique things with that, for example in landscape or interior photography. Furthermore, it’s also quite bright, with a largest aperture of f/2.8. The combination of a 12mm lens for a camera with a full-frame sensor with a brightness of f/2.8 is unique by itself. That high brightness makes the Laowa ideal in principle for astrophotography, because you can keep your shutter speeds relatively short. Laowa delivers a filter adapter for the 12mm, so you can use fairly normal 100mm filters. That’s also unique. If you can filter with other wide angles with this field of view, then you need special wide-angle adapters with big, and thus expensive, 150mm filters. If you’re just looking for a 12mm wide angle, this is already reason enough to put the Laowa high on your list. The fact that it doesn’t have autofocus is actually not that important for lenses with such short focal lengths. At f4 or f/5.6, the depth of field is already enormous. Photographers who work with a Sony A7 or A9 have an extra reason for choosing the Laowa 12mm. With a simple adapter, you can use it as a regular 12mm lens. But there’s also the Laowa Magic Shift adapter. With this, you can use the Laowa as a 17mm f/4 shift on a Sony. Or just as 17mm f/4, if you don’t want to shift. Two lenses in one: that’s pretty handy. 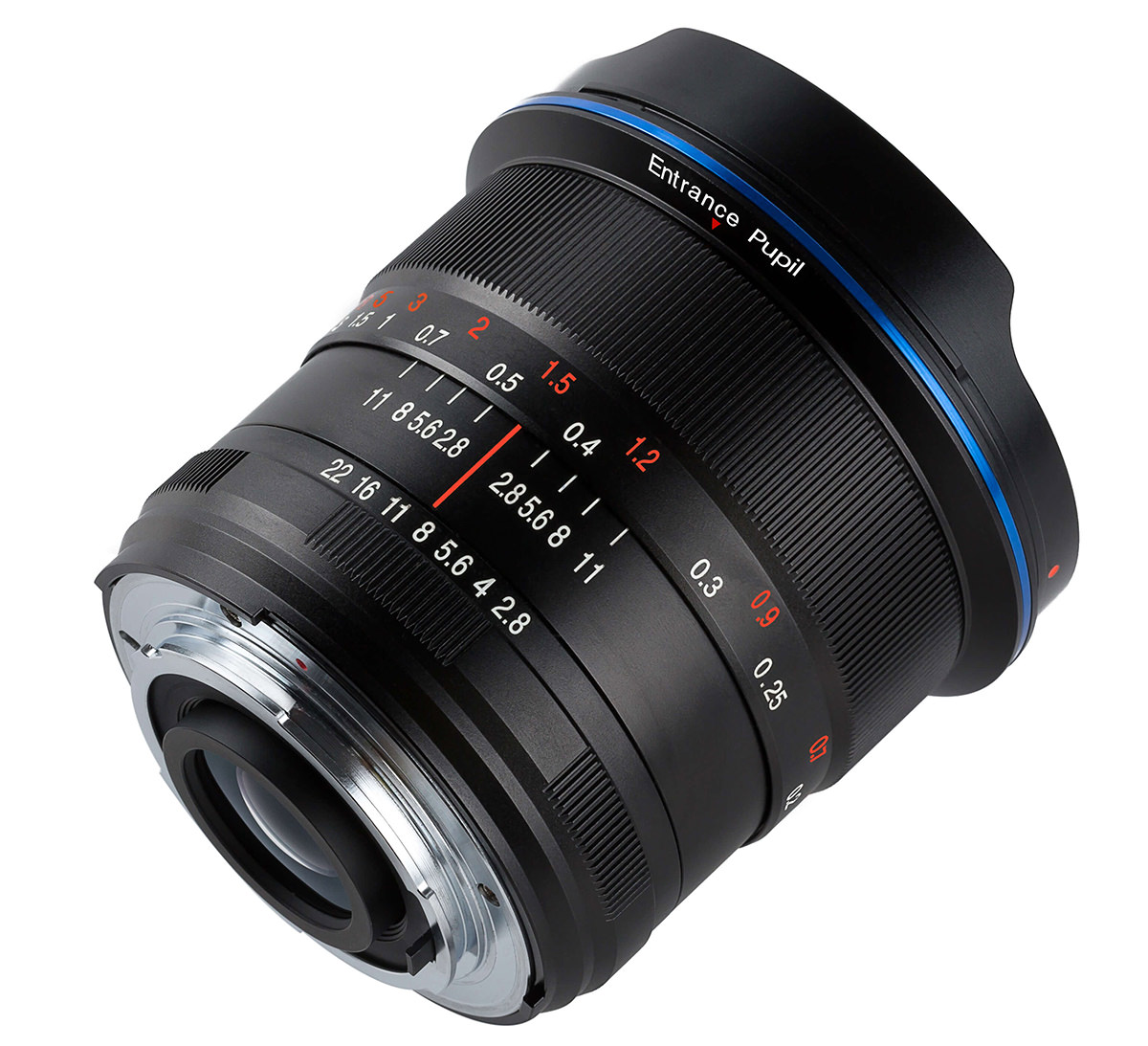 The Laowa 12mm f/2.8 Zero-D is a compact lens. It’s only slightly longer than 8 cm and pretty slender. That’s due in part to the lack of autofocus. That makes the mechanical construction a lot easier. The weight of 609 grams is somewhat higher than you would expect with such a compact lens, but that has a simple explanation. No plastic has been used in the Laowa. It’s all metal and glass. And with 16 elements in 10 groups, there’s a lot of glass in this lens. The focus ring turns reasonably smoothly, but it does make a little noise. The focus arc is nearly 90 degrees, remarkably long for a lens with such a short focal length. You can focus to 18 cm, resulting in a magnification of 0.2x. Laowa uses “floating elements” that change position as you focus closer. As a result, the image quality remains good even at the shortest setting distance. The aperture ring is nicely dampened and has an uneven distribution of the clicks. The distance between f/2.8 and f/4 is the largest, from f/4 to f/5.6, the adjustment is slightly smaller, and so it goes on to f/22. The advantage is that you can very easily set by feel to f/8 or f/11. You don’t even have to count how many stops you close the diaphragm. The mount is of course also made of metal, and there’s not much more to say about it. It’s a completely mechanical mount without any contacts for communication with the camera. The lens does not have gaskets to make it extra weather resistant. They’re not really needed with a fully mechanical lens, as such a lens isn’t that vulnerable to moisture. But you do have to be careful that no water gets into the camera via the mount. The Laowa 12mm f/2.8 Zero-D comes with a small lens hood that doesn’t lock and was a bit loose on our model. So you have to be careful that it doesn’t just fall off. You can attach it to the lens backwards for transport.

Laowa has now brought a number of very unique lenses to the market. They have two things in common: purely mechanical construction and generally good optical performance. The Laowa 12 mm f/2.8 Zero-D is no exception in terms of performance. At full aperture, the center sharpness is already at its maximum. We tested the 12mm on a 42-megapixel Sony A7R III. But even on such a demanding sensor, the center sharpness did not increase with stopping down. The edges of the image are already pretty good at f/2.8. The corners, though, lag well behind at full aperture. Stopping down to f/4 already results in decent improvement, and at f/5.6, the corners are really good. This lens peaks at f/8 and, remarkably enough, the Laowa doesn’t suffer from diffraction at f/11. The values are then equal to those at f/8. The limited sharpness in the corners at f/2.8 isn’t surprising in itself given the combination of extreme field of view and high brightness, but it makes the lens somewhat less attractive for astrophotography. For that, you really do need f/4, and then there are other options to consider. Something else that the Laowa 12 mm f/2.8 Zero-D suffers from at full aperture is vignetting. That’s a hefty 2.5 stops at f/2.8. That’s clearly visible, because this lens doesn’t transmit information to the camera and therefore can’t make use of corrections in the camera. From f/5.6, the vignetting is one full stop or less, and that’s good. Chromatic aberration is present but only visible in the extreme corners and is reasonably easy to correct in post-processing. If you only shoot in jpeg, you’ll see it now and then, because it’s not eliminated by the camera.

According to Laowa, this 12 mm f/2.8 has “Zero-D”, which stands for zero distortion. No distortion. Well, with (extreme) wide angles, you always have to distinguish between three types of distortion. The first is perspective distortion. Everything that is close, becomes very big in a shot, everything in the distance quickly shrinks. If you point the lens upward, you also tilt your perspective vanishing point upwards. Ordinary rectangular buildings quickly resemble modern pyramids. The second form of distortion arises because you capture a convex, three-dimensional space on a flat sensor. In order to keep straight lines straight, you need a certain kind of projection for this, which means that objects appear to become larger and larger towards the edges of the image. Cars on the edge of the image seem much longer than they actually are; people seem to be much broader. This isn’t caused by a bad lens design, but simply by optical laws. Fisheyes use a different kind of projection with which objects retain their normal dimensions at the edge of the image, but that can only be done by making curves visible in straight lines. You therefore always have these two forms of distortion with an extreme wide angle. The Zero-D that Laowa is referring to is the absence of barrel-shaped distortion that occurs with somewhat less well-designed lenses and that causes straight lines, especially at the edge of the image, to curve. In serious cases, lines aren’t distorted equally everywhere, and then we have “mustache” distortion. That’s often very difficult to correct in post-processing. The Laowa 12 mm f/2.8 Zero-D is supposed to be free of this lens error. But the Laowa doesn’t appear to be entirely Zero-D after all. In our lab tests, we measured a barrel distortion of 0.5%, and in the test photos there’s some visible in very critical shots. It’s very little, and the distortion is easy to correct in post-processing. In practice, the distortion is so low in any case that you can level the camera for interior photography. With lenses with a lot of barrel distortion, that’s very difficult because straight lines are so convex.

An important argument for buying the Laowa 12mm f/2.8 Zero-D is the ability to use it with the Magic Shift adapter as a 17mm f/4 shift lens. The Magic Shift adapter, however, can only be used on a Sony A7 or A9 camera, and it can only be used on a Laowa 12mm with Canon mount. The combination will then become longer and heavier than, for example, the Canon 17 mm f/4 TSE. But for a total weight of just over one kilo, you have a 12mm and a 17mm with you. And if, for example, you’re a landscape photographer who is often on foot, that’s a very nice weight. Especially because you can also shift the 17mm, and you can use both with (relatively) compact 100mm filters. We’ll publish a review of the performance of the Laowa 12 mm f/2.8 with Magic shift converter soon.

The Venus Laowa 12mm f/2.8 Zero-D is a nicely compact extreme wide angle for cameras with a full-frame sensor. Canon offers the even more extreme 11-24 mm f/4 zoom, but that’s much larger, heavier, less bright and can only be used with humongous 150 mm filters. The Canon is also much more expensive. For Nikon, you don’t even have a 12mm in original Nikon lenses. The compact dimensions, high brightness, ability to use filters and the option to use it as a shift lens make it unique. Sony users are the only ones who really have other options. The new Sony 12-24mm f/4 zoom is only slightly more expensive, but lighter and of course it zooms up to 24mm. And then there’s the much smaller and lighter but also less bright 12mm f/5.6 Voigtlander. However, you can’t use either of those on a Sony as a shift lens. For landscape and interior photographers, the Laowa is therefore a very interesting option.