We have tested a number of new lenses from Tokina for videographers, including the AT-X 11-16mm T3 PRO DX (appearing later) and the impressive AT-X 16-28mm T3.0 CINEMA PRO FX. The Tokina AT-X 16-28 is a bright ultra-wide angle lens for full-frame. It is an impressive lens, in more ways than one. 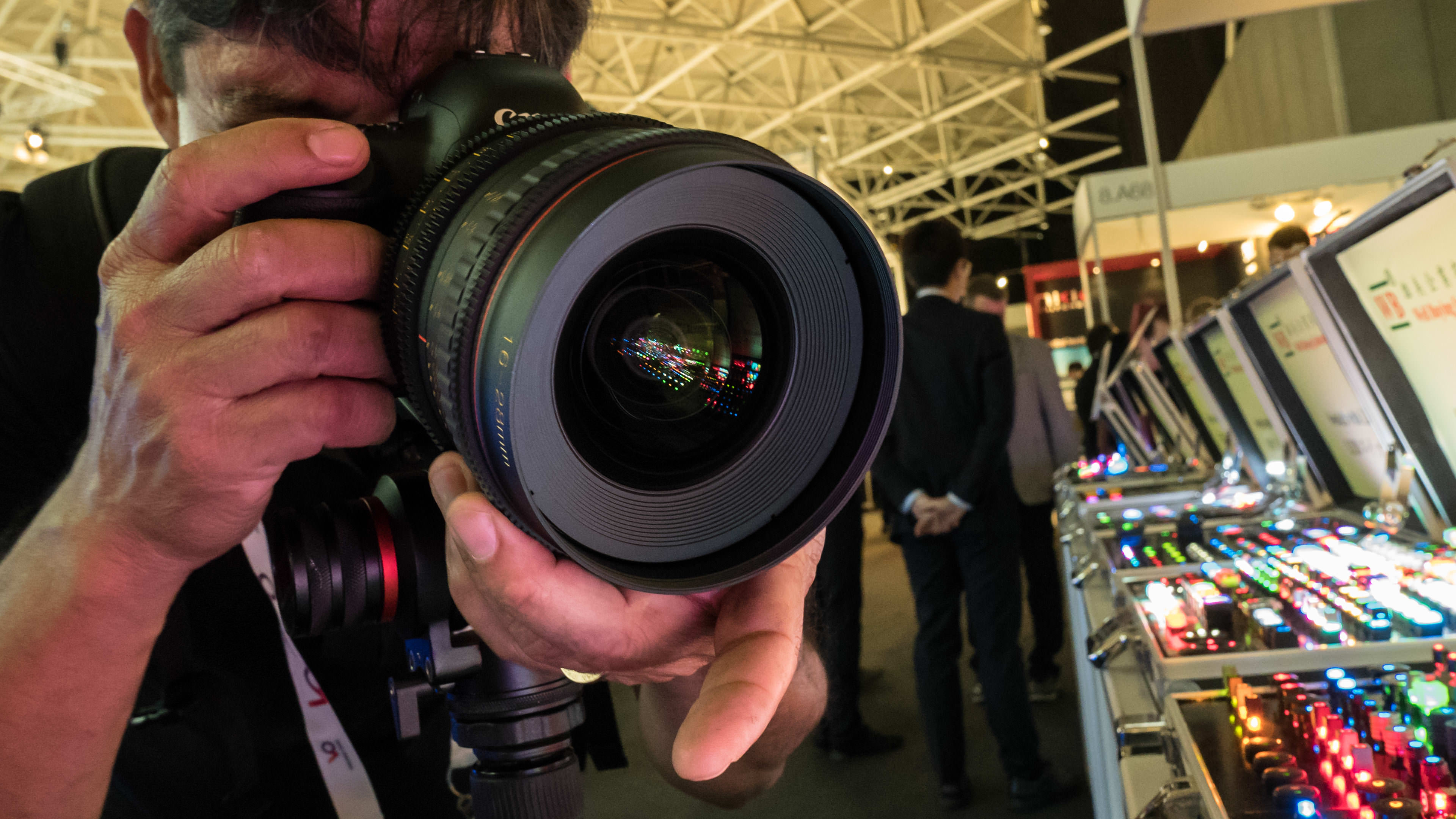 Filming or photographing without being noticed is not possible with the Cinema AT-X 16-28mm. 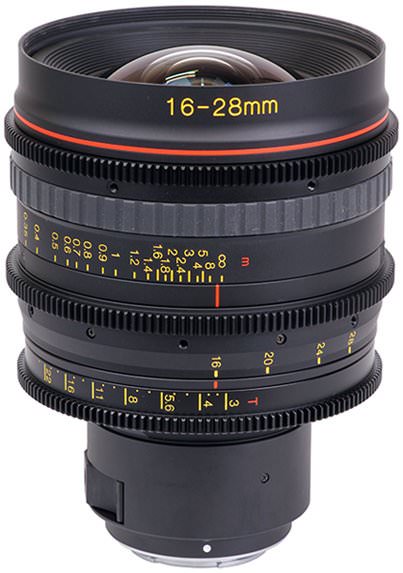 The AT-X 16-28 T3 CINEMA PRO FX is based on the existing Tokina AT-X PRO FX 16-28mm f/2.8, with 15 lenses in 13 groups. Three of the lenses are aspherical, and there are two lenses of SD glass with a low met refractive index. The “regular” version was already a big boy, with a weight of 950 grams. The CINEMA PRO goes way beyond that with a weight of 1500 grams. The mechanical execution is outstanding. The version for Sony E cameras (top) is clearly recognizable from the bulge on the underside, which is absent in the other versions like the one for Canon EF (bottom). 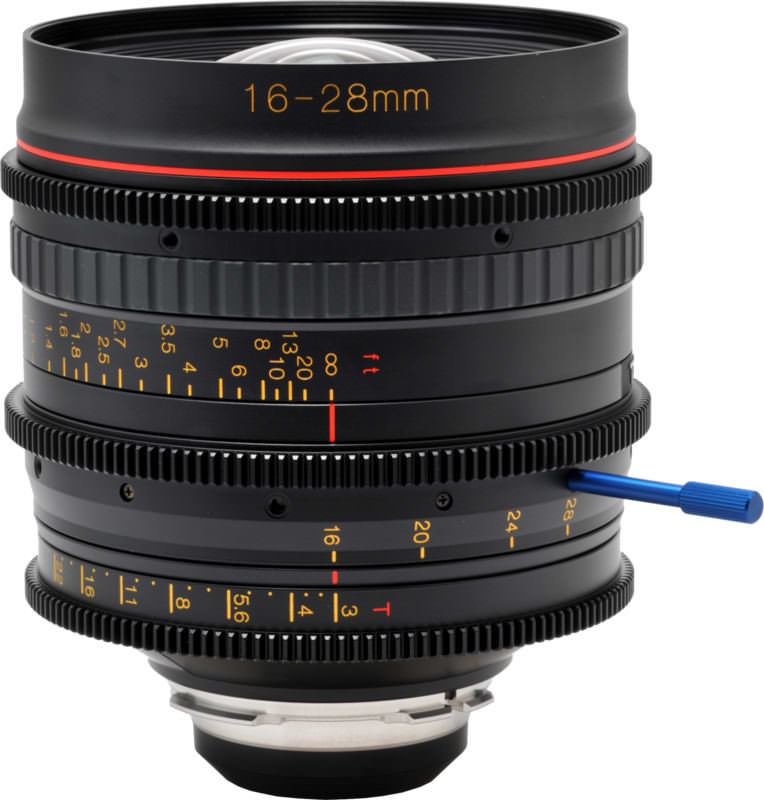 Cinema lenses are always a good bit more expensive than “regular” lenses. For the high price tag, you do get more in return. Everything feels very solid, and the long focus arc is very smooth and beautifully dampened. These kinds of lenses are often used on a (video) tripod, and then the extra weight helps in suppressing any vibrations. But when shooting is done by hand, the high weight will instead mean that you more quickly develop problems with vibrations. Next to the ribbed ring for focusing, the lens has two other rings: for zooming and for setting the stepless aperture. The aperture consists of 9 curved lamellae that create a beautifully circular opening. In the focus and zoom rings, there are also screw holes, for the attachment of small handles. You can use these when you are not working with a focus puller. The CINEMA PRO is not only a good deal fatter, it is also somewhat longer than the regular version. Whereas the photo lens has a fixed tulip-shaped lens hood on the front, on the front of the CINEMA PRO there are 112 mm screw threads for filters or a matte box. The regular lens will not take any filters. The aperture values are not indicated in f-stops, but in T-values, as befits a real cinema lens. The difference is that an f-value is a theoretical value. T-values take into account things like vignetting in the lens and thus show the actual amount of light that a certain aperture lets through. When changing lenses, you can thus simply maintain the same T-value for exposure. If everything is working properly, both shots then get the same amount of light.

These two shots show how little focus breathing the Tokina 16-28mm has. When we move the focus from the button at the bottom left to the lights at the top right, the image scale hardly changes.

Move your mouse over this image.

The CINEMA PRO FX is parfocal.

According to Tokina, the CINEMA PRO lens is based on the regular AT-X PRO FX, but the design has been adjusted. For photographers, it is extremely bothersome when the focus changes as soon as you zoom. You then have to focus again. For videographers, it means that you cannot zoom with the lens while filming. And yet that exactly what you (sometimes) want. A film lens thus has to be parfocal. That is to say, the focus may not change during zooming, and Tokina has managed that nicely with this lens.

Another property with which Tokina has tinkered is focus breathing. This is a phenomenon that occurs when you move the focus from one point to another. With a lens with a great deal of focus breathing, the image scale then changes, and the lens appears to zoom. Especially at short focal distances, that is visible. The CINEMA PRO can focus up to 28 cm, and if a lens has trouble with focus breathing, it should be quite visible at this distance. We tested it. The focus breathing is really quite minimal. It is just barely visible if you pay close attention, but it is negligible in practice.

The sharpness of the lens is high. The lens has 9 rounded aperture lamellae that create a great bokeh. The bokeh balls are round with a beautiful, soft edge and do not show the dreaded “onion rings.” We tested the lens on the Sony A7R II. The sharpness in the center is already very high at full aperture, and the edges give little up to that. At 16mm, the corners lag behind a bit. With some stopping down, it does get better, but they never entirely reach the high level of the rest of the frame. At 24mm, the corners are better, and even nicer in the 28mm setting. Those who also film in super-35, which produces the most beautiful 4K images with the A7R II, will never see those corners. The same applies for filming in 4K with a camera like the Canon EOS 5D Mark IV, which has a crop factor of 1.74. 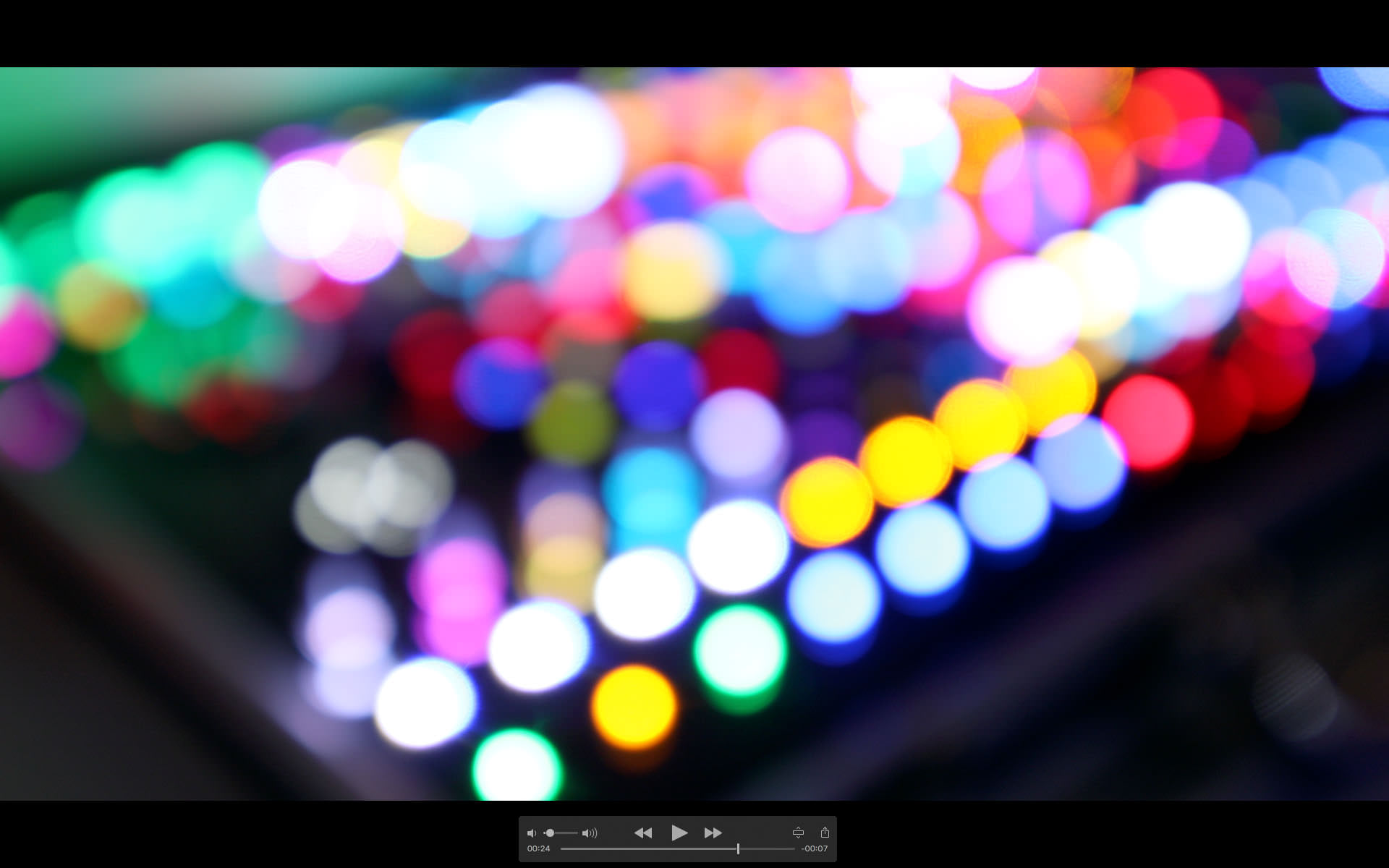 When the background is blurred, light sources change into lovely light balloons. Hard edges along the light balls or rings in them can significantly reduce the quality of the bokeh. With the Tokina 16-28mm, it looks great. 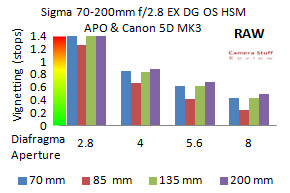 What is true for the sharpness also applies for the vignetting and the distortion. At 16mm and at full aperture, we find the most vignetting; with zooming in or stopping down, it decreases. The distortion is a bit more than half a percent barrel-shaped at 16mm, which is pretty good for an extreme wide angle, nearly neutral around 24mm and then about 0.3 percent pincushion-shaped at 28mm. These are values that will not bother you in practice. 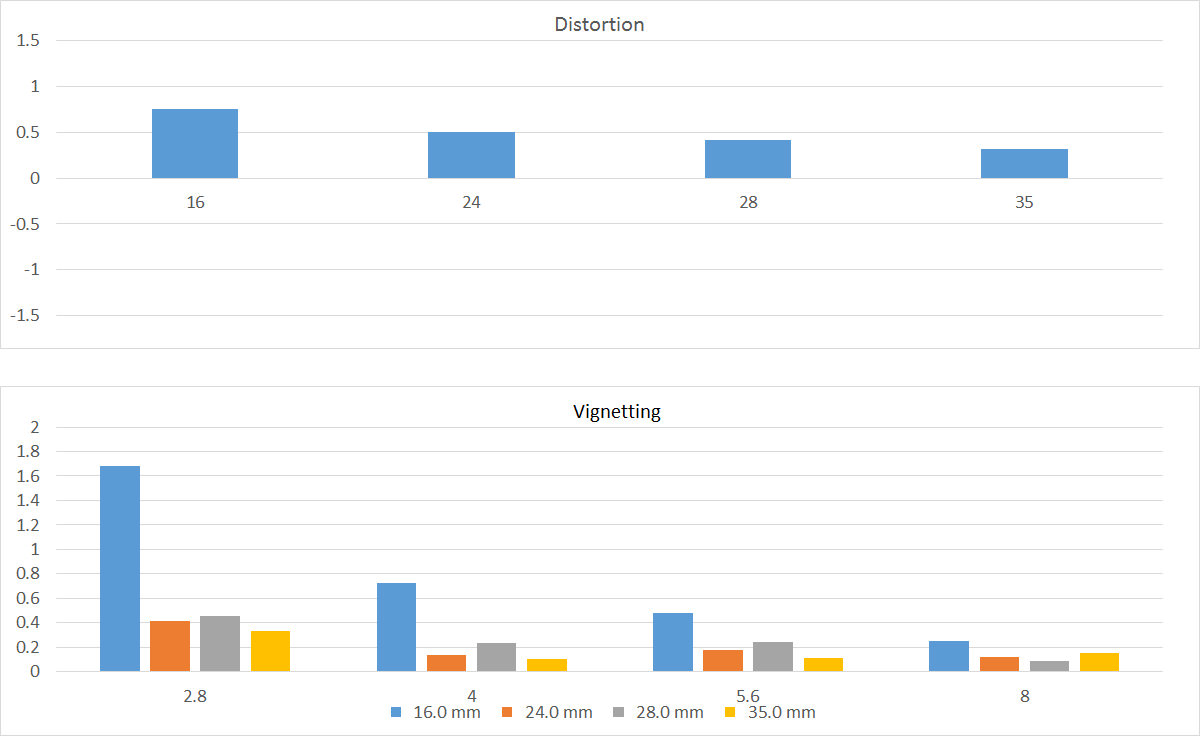 Also watch this video from HoyafilterTV to get an idea of the quality and the capabilities of the Tokina AT-X 16-35mm T3 CINEMA PRO under various circumstances.

Tokina claims, like many other manufacturers, that their cinema lenses are 4K-ready. That is to say, they can handle the resolution of Ultra HD. Ultra HD has a resolution of 3840×2160 pixels, and that is four times the resolution of regular HD, 1920×1080 pixels. Four times the resolution of HD, a standard that we not long ago thought was so great, seems like quite a bit. It means a file size of about 8.8 megapixels per image. That is also what you get as jpeg when you take frame grabs from UHD video. Anyone who has a camera like the Sony A7RII or Canon EOS 5D S photographs with the same lens at much higher resolutions of 42 and even 50 megapixels. Compared to that, 8.8 megapixel video seems like a breeze. The lens does achieve it easily when you film with the Sony A7R II in full frame mode. The camera then uses nearly all its pixels and interpolates those to a lower resolution. But if you film with an A7 II, the 24 megapixel version, in Super35, then you use an APS-C crop from the sensor. The just about every pixel on the sensor is also a pixel in the video file. And that places high demands on the lens. Furthermore, differently than with photography, with video you have fewer options for removing lens errors during and after the shot. With video, in short, 4K makes higher demands on lenses. The Tokina more than fulfills those.

Use the Lens comparison or look in our list of reviewed lenses to compare this lens with other lenses.

The TOKINA CINEMA AT-X 16-28MM T/3 is an impressive physical specimen. Put this lens on your camera and you immediately draw attention. Except of course when we were filming with this lens on the IBC in Amsterdam. Visitors to this international broadcasting fair are quite accustomed to it. The weight and the dimensions, the whole finish and solidity—everything radiates quality. The optical performance in Super35 format (APS-C) is especially high. At full-frame, the corners continue to lag a bit behind the center and the edges, and we see that often with full-frame lenses on cameras with extremely high resolution. For filming, in 2 or 8 megapixels, you will probably not notice the lower corner sharpness that we found in the measurements at 42 megapixels.
Important for filming is the near-absence of focus breathing, so that you can make really good focus pulls. And with this lens, you can, thanks to the great bokeh, also make great night shots with beautiful light balls in the background. Those who photograph a great deal are better off with the auto focus version. For the real cinematographer, this Tokina is a winner.