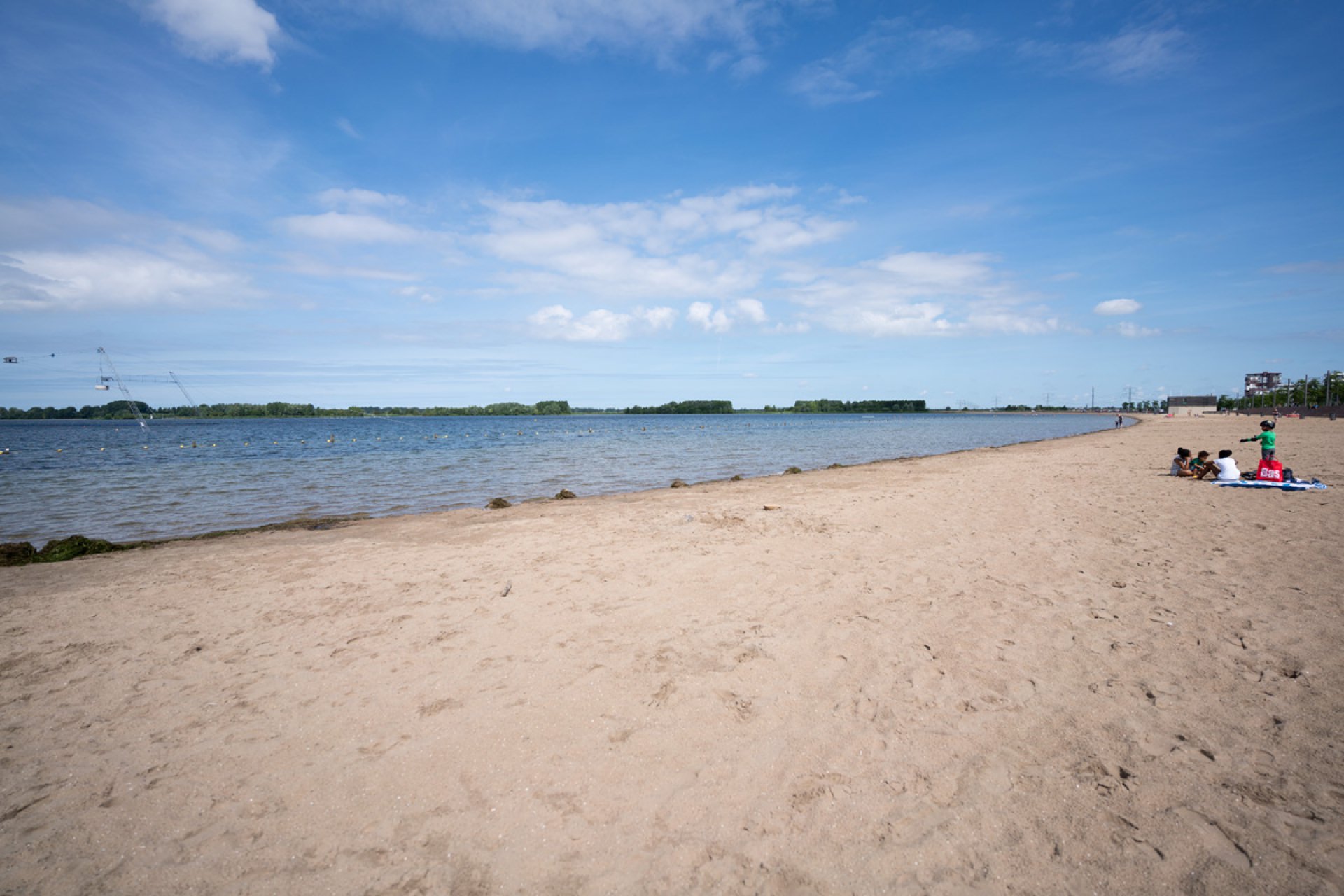 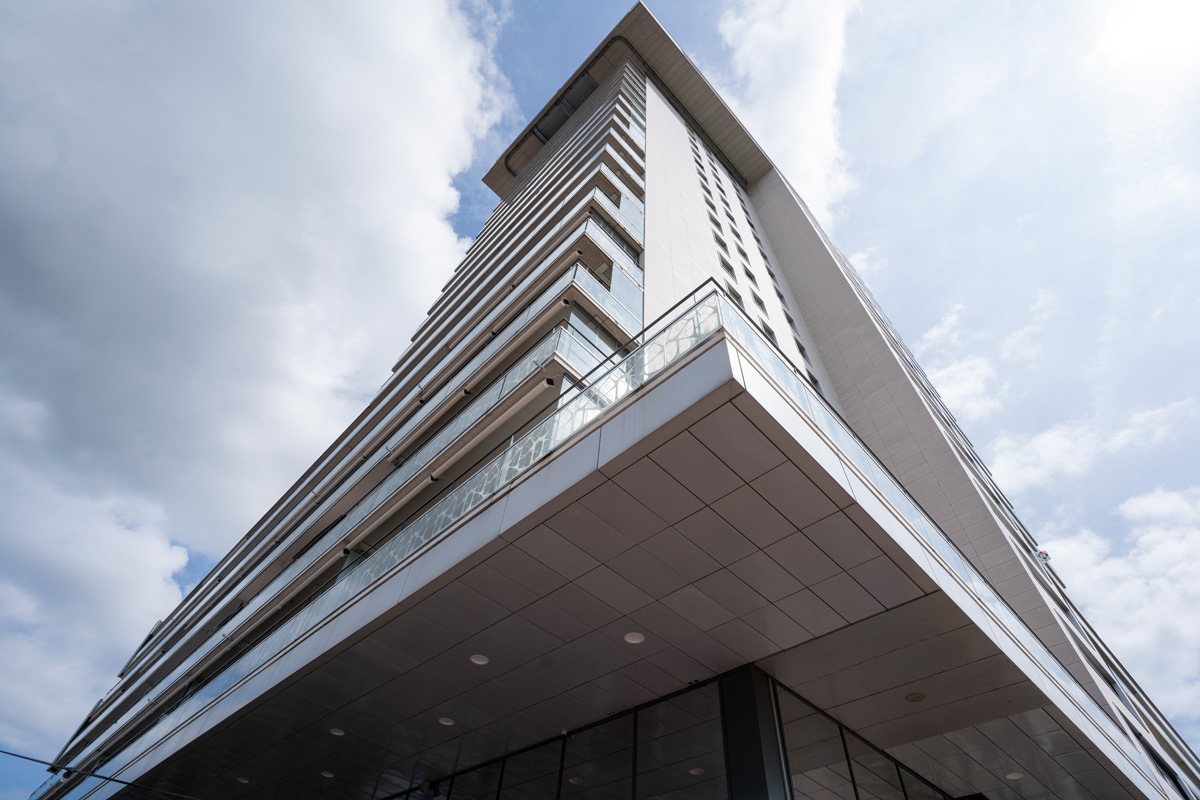 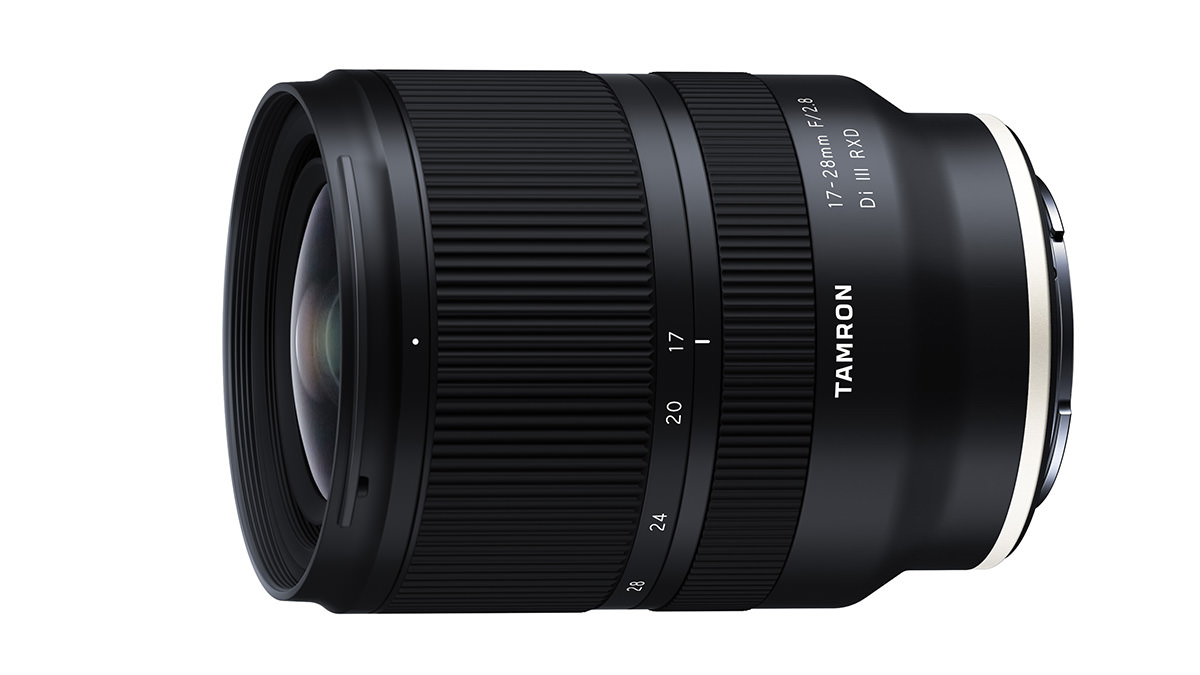 When Tamron introduced the Tamron 28-75 mm f/2.8 Di III RXD, many Sony users were pleasantly surprised. A light and compact standard zoom with high brightness and a friendly price tag! It’s not surprising that a year after the introduction, Tamron still has to make every effort to meet the demand for this lens. The biggest objection you could have to the standard zoom was that the wide-angle position started at 28mm, while 24mm is now the norm. So, there was something to be desired on the wide-angle side. With the Tamron 17-28 mm f/2.8 Di III RXD, there is now a wonderful addition to the standard zoom, and Tamron meets the wide-angle requirements of Sony users. With this lens, Tamron repeats the feat they managed with the standard zoom. It is again small, light, bright and (much) cheaper than alternatives from Sony. Tamron achieves this by making the range slightly smaller. Instead of the usual 16-35 mm, this Tamron is a 17-28 mm. Tamron’s wide-angle zoom and standard zoom therefore align but do not overlap. Furthermore, a plastic housing is used instead of metal, and there are no extra buttons or rings on the lens. As a result, the lens only weighs 420 grams. Many photographers will probably effortlessly overlook that if the image quality of this lens is good. Because then the price-quality ratio is almost unbeatable. With the arrival of the Tamron 17-28 mm f/2.8 Di III RXD, Tamron seems to be working on a series, and there are already indications that a matching telephoto zoom is coming. We can hardly wait. 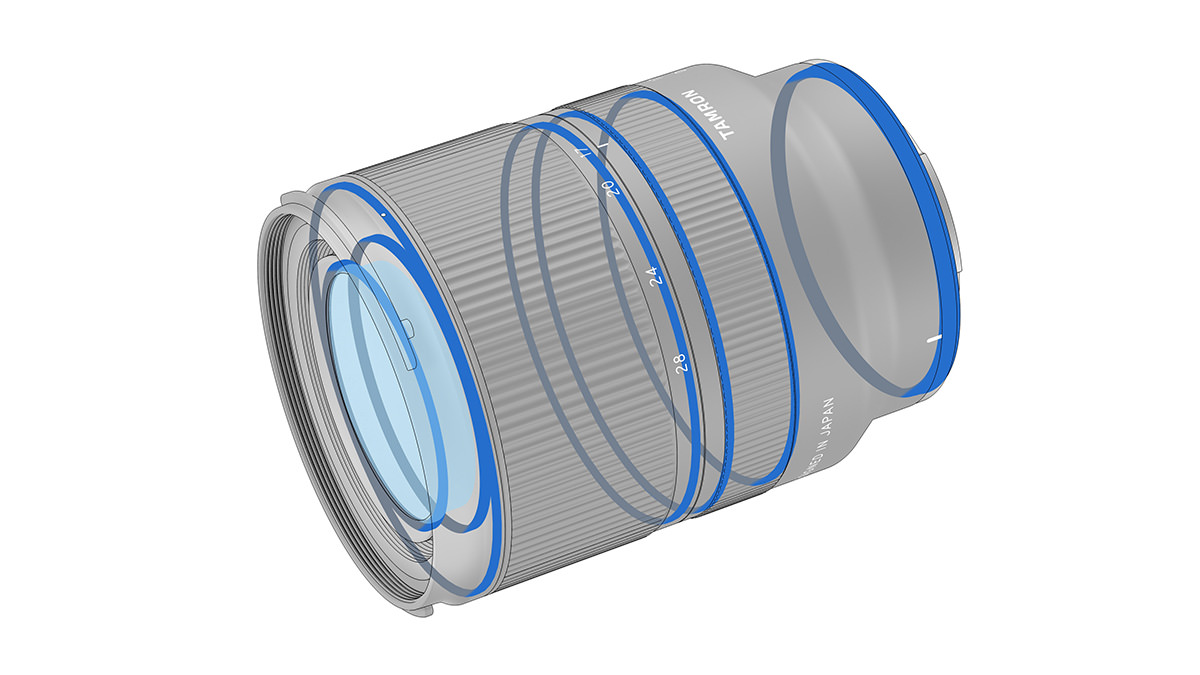 The Tamron 17-28 mm f/2.8 Di III RXD is a very compact lens. At 99mm, it’s the same length as the Sony Vario-Tessar® T* FE 16-35 mm F4 ZA OSS, but it’s slimmer, and the filter size is also smaller. The Sony has 72 mm; the Tamron, 67 mm. This Tamron thus has the same filter size as the Tamron 28-75 mm f/2.8 Di III RXD. That’s nice, because you can use the same filters for both lenses. What is also unique about the 17-28 mm is that it no longer extends when zooming. As on the 28-75 mm, the zoom right is in front of the focus ring. For photographers who have worked a lot with lenses from other brands, that will take some getting used to, and it’s extra awkward if you use this lens along with Sony zoom lenses. But if you choose a whole Tamron set, you will probably get used to it quickly. The optical design is complex, with 13 elements in 11 groups including an aspherical element and a number of elements for which glass with a special refractive index has been used. The lens is moisture-resistant and includes a gasket at the rear for a good seal on the body. The front lens element has an extra fluorine coating so that dust and dirt stick less easily, and the lens is easy to keep clean. Nevertheless, it may be a good idea to use a filter so that no dirt can get between the tube and the rest of the housing. Zooming is nice and light and slightly smoother than on the 28-75mm. The focus ring turns even more lightly. The diaphragm has 9 blades, and Tamron claims that the aperture opening is still round even if you stop down two stops. 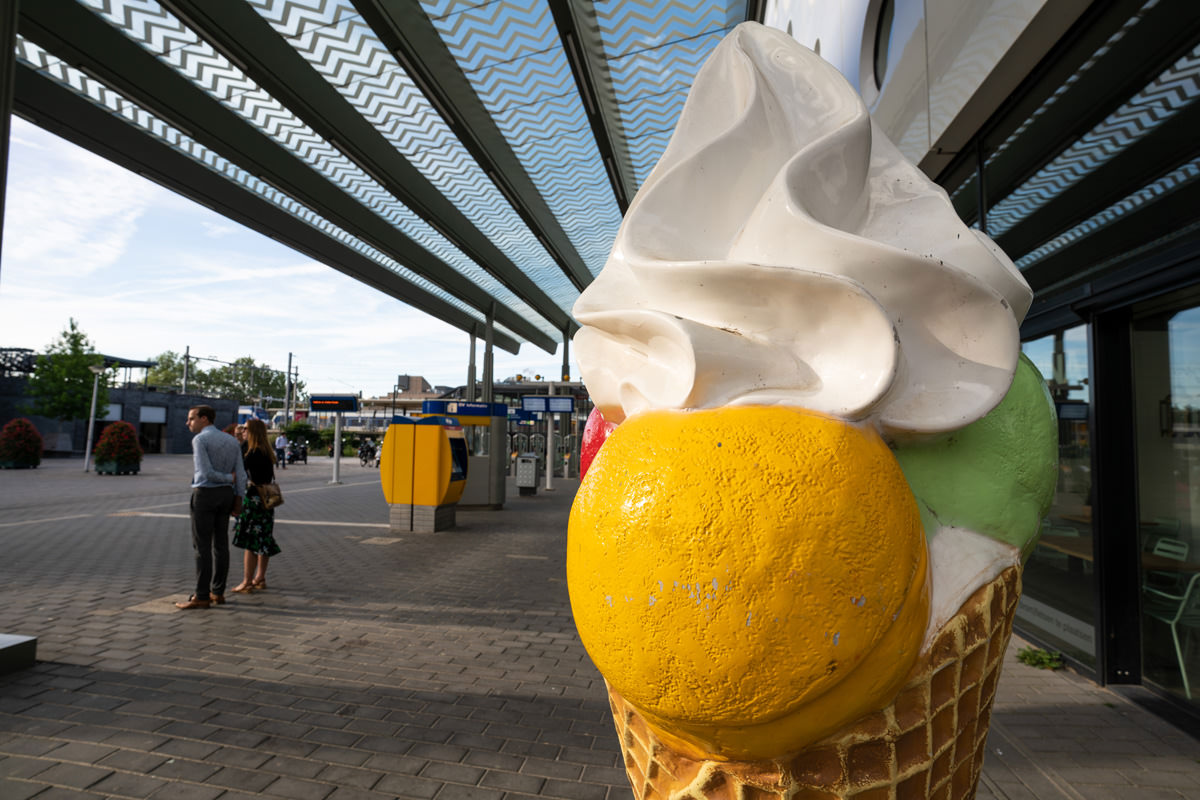 One of the advantages of mirrorless systems is that you can easily use lenses that are actually made for other camera systems via adapters. What does not always work well then is the autofocus or part of the autofocus functions. The Tamron 17-28 mm f/2.8 Di III RXD has been specially developed for the Sony FE mount. There is therefore no problem with the use of advanced autofocus capabilities such as Eye-AF or the “Direct manual focusing system” (DMF) on Sony mirrorless cameras. It all works as it should, and at full aperture, the focus is very fast. The Tamron 17-28 mm f/2.8 Di III RXD has the same RXD drive as the previously released Tamron 28-75 mm f/2.8 Di III RXD. The Tamron RXD (Rapid eXtra-silent stepping Drive) focusing motor is quiet, fast and accurate. The Tamron 17-28 mm f/2.8 Di III RXD zoom is therefore suitable for making video recordings with autofocus. It is not an ideal lens for truly experienced videographers because the manual focus is not linear, but anyone who films with the autofocus – and this works well with the new Sony A7R IV with Eye-AF Tracking in video – has a very good cinema lens with this Tamron. On the other hand, non-linear focusing is nice for photography, because it allows you to focus on a still subject very accurately. The autofocus of the Tamron 28-75 mm f/2.8 Di III RXD is provided by an RXD (Rapid eXtra-silent stepping Drive) engine. This makes the autofocus not only fast, but also quiet. Stepper motors in combination with autofocus on the sensor also guarantee a high degree of accuracy. The shortest setting distance at 17mm is 19cm, and the maximum magnification is 0.19x, which is very nice for a wide-angle zoom. 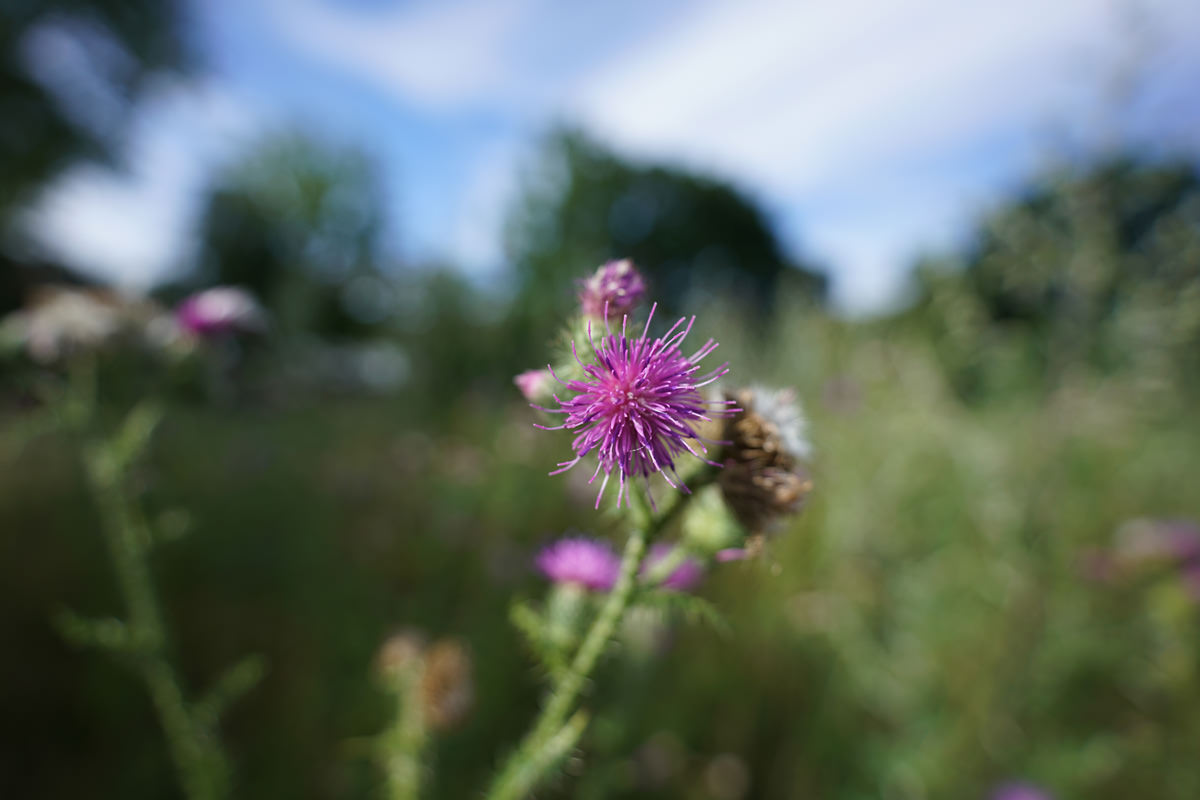 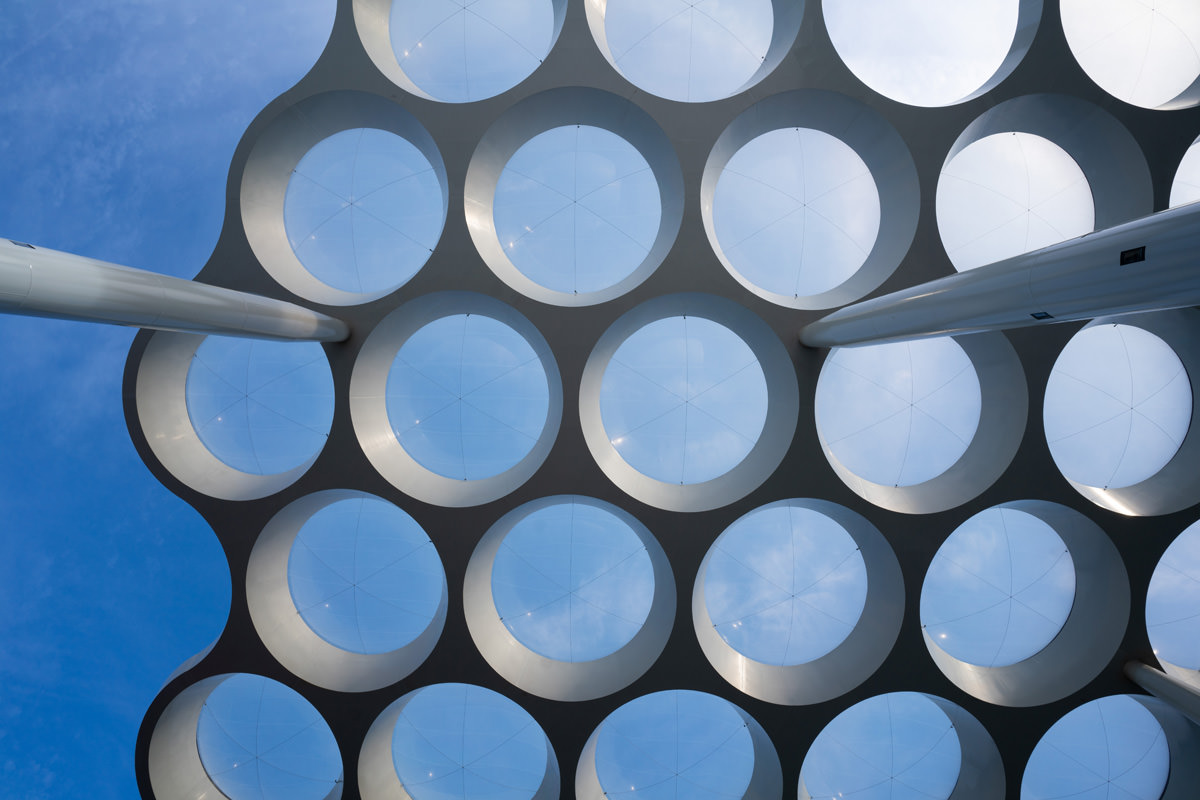 As with the standard zoom, we are very curious about image quality with the Tamron 17-28 mm f/2.8 Di III RXD. The lens is a lot cheaper than the wide-angle zooms from Sony. So, you could forgive the Tamron if the quality was a little less. You get what you pay for, right? But of course, we also hope that the Tamron scores equally well. Because then it’s really a great deal.

When we look at the wide-angle setting, we see really impressive results. The Tamron 17-28 mm f/2.8 Di III RXD is super sharp at full aperture at 17 mm, even from corner to corner. Stopping down is actually hardly necessary, unless you need more depth of field. It can’t hurt, by the way, because the quality increases slightly up to f/5.6. That center sharpness is still high at 24 mm, but at full aperture we see a bit more gradient towards the corners. For landscape photography, you will soon want to stop down to f/5.6 to get the corners sharp. The same applies even more for the 28mm setting. At full aperture, we still see a good center sharpness, but the gradient to the corners is a little bit bigger. It also takes a little longer before the lens reaches maximum quality. That doesn’t mean that the images look bad at full aperture. And at f/8, the lens is sharp from corner to corner and excellent for demanding applications.

A bit of vignetting is actually visible at all settings and apertures with the Tamron 17-28 mm f/2.8 Di III RXD. But only at 17mm and full aperture can it really be seen in the pictures. Mind you, a maximum value of 1.2 stops is not much for an extreme wide angle.

Distortion was visible in the viewfinder for the sample pictures before taking the shot. On the test camera for the sample pictures, a Sony A7R II, the shots were displayed corrected immediately after being taken. Because the lens is still very new, there is no profile in Adobe Lightroom, but that will change soon. In the jpegs, you have almost 0% distortion. In the RAWs, you can see that the lens does have the expected distortion. Remarkably enough, it’s quite low at 17 mm, with a little more than 0.5% barrel-shaped. On the longer telephoto settings, however, you get high, pincushion-shaped distortion of more than 2%. That’s nicely corrected in the camera but may also be the reason for the slightly lesser performance at full aperture in the corners at those longer settings.

The Tamron 17-28 mm f/2.8 Di III RXD has a diaphragm with rounded blades. As a result, the aperture opening should remain fairly round up to around f/5.6, according to Tamron. This is slightly at the expense of the ability to make the most beautiful sun stars at f/11 or f/16, but you can see the effect at full aperture. Of course, with a 17mm at f/2.8 you don’t get very soft, almost impressionistic backgrounds, but on a full-frame camera, you do get a gradient in sharpness. And then it’s nice if that gradient looks soft and organic. The Tamron 17-28 mm f/2.8 Di III RXD has a nice bokeh for a wide-angle zoom. 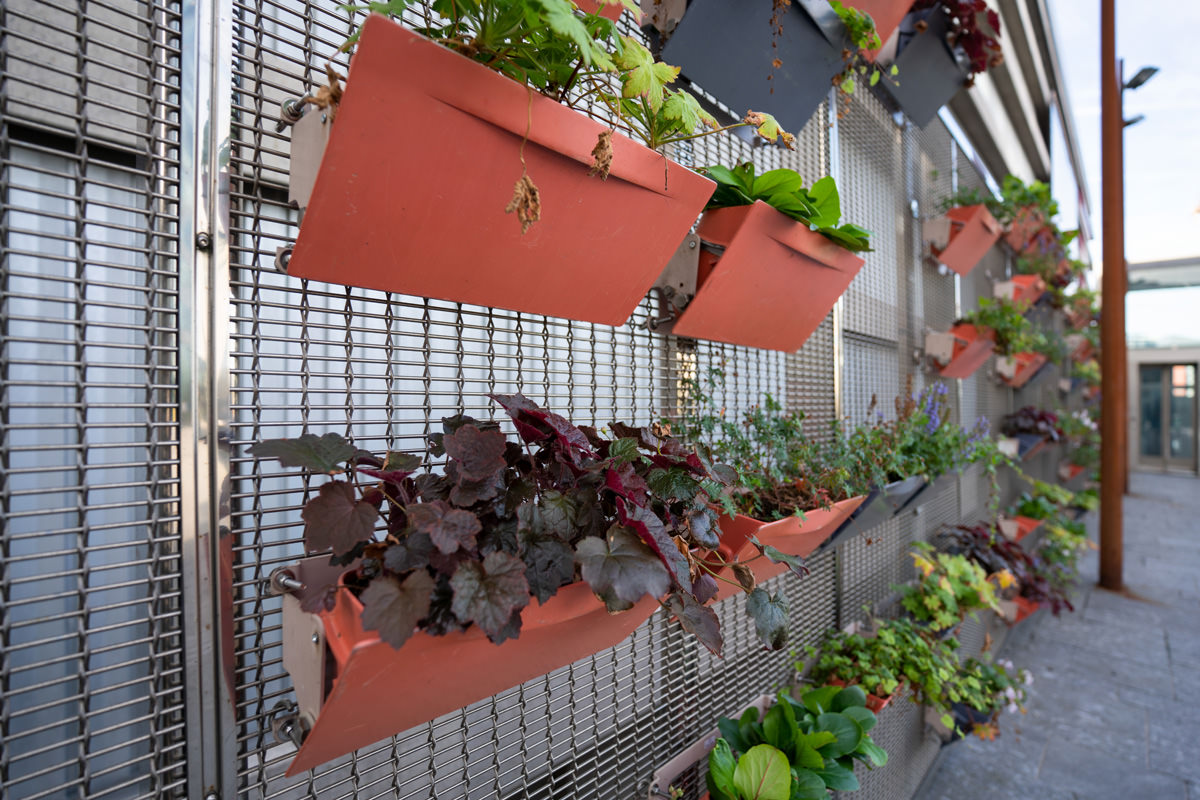 For the mirrorless cameras from Sony with a full-frame sensor, there were – until now – two wide-angle zoom lenses that you could use without an adapter. Both from Sony and both with a range of 16-35mm. One is an f/2.8 zoom; the other, an f/4. The Sony Vario-Tessar® T* FE 16-35 mm F4 ZA OSS version has the lower price, with a current retail price of around 1200 euros; the bright Sony FE 16-35 mm f/2.8 GM has a suggested retail price of no less than 2700 euros. The Tamron 17-28 mm f/2.8 Di III RXD is just as bright as the GM version. It’s the same length and not as fat as the Vario-Tessar® T* FE 16-35 mm F4 and almost 100 grams lighter. And with a suggested retail price of just under 1000 euros, it’s the cheapest of the three. The Tamron 17-28 mm f/2.8 Di III RXD has one millimeter less range on the wide-angle side and 7 mm less on the “telephoto” side. That one millimeter less wide angle does make a difference. On the long side, it’s a slightly different story, because this lens is made to be used along with the Tamron 28-75 mm f/2.8 Di III RXD. When you have them both, they fit perfectly together. You then have no overlap, as you do when you purchase a wide-angle and standard zoom from Sony. If you look at the difference in price and weight, it’s very easy to overlook one millimeter less wide angle and the lack of overlap.

Curious about the performance of the Tamron 17-28 mm f/2.8 Di III RXD in practice? Click on the button below and visit our renewed web gallery with sample images. The images can be downloaded in full resolution to be viewed at 100%.

The Tamron 17-28mm f/2.8 Di III RXD is a wide-angle zoom that we can easily recommend. The Tamron 17-28mm f/2.8 Di III RXD performs outstandingly. The lens makes good use of the corrective capabilities of the Sony system cameras, and that results in sharp, distortion-free images with a limited amount of vignetting. The autofocus is fast, quiet and accurate, and zooming and focusing are fast, light and smooth. The lens can also use relatively cheap and compact 67mm filters. It’s a great lens for both documentary photography and landscape and architecture. What else could you want?