The Sony A77 replaces the Sony A700 and is the last descendant of the Sony Translucent Mirror cameras (SLT) series. These are SLRs with a fixed mirror, instead of a regular mirror which opens and closes taking a shot. The SLT makes it possible to take series of shots at higher speeds than what is physically possible for an SLR. The target group of the Sony A77 consists of advanced amateurs or professional photographers. Due to the choice of a semi-transparent mirror, combined with the choice of 24 megapixels on an APS-C sensor, Sony has not made it easy for itself. 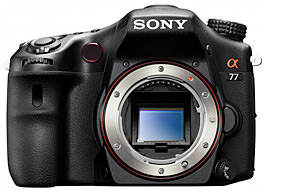 For a good signal to noise ratio and high dynamic range, you need as much light per pixel as possible. And the choice for an SLT with a 24 megapixel APS-C sensor goes against the grain a bit. To what extent has Sony managed to maintain a high image quality?

The design of the camera body of the Sony A77 is decent, with a large amount of buttons on the body, giving you relatively little need to resort to the menu settings. The camera fits comfortably in your hand. To further enhance the user convenience, custom functions can be assigned to the AEL, AF/MF and ISO button.

Only adjusting the autofocus mode is less intuitive. Seen from the top, the button is left of the lens, ensuring you need to take the camera away from your face to switch this knob. 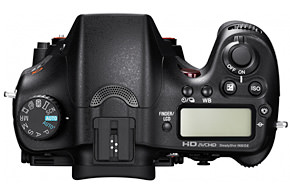 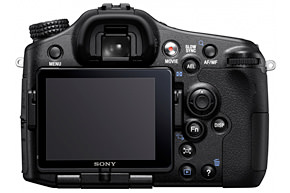 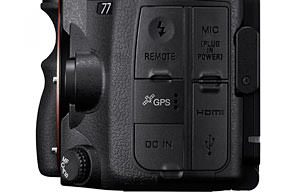 The construction of the Sony A 77 is well made and the camera fits comfortably in your hand. Very nice about the control of the Sony A77 are the turning wheels at the front and back of the camera, allowing you to adjust the shutter speed and aperture separately without having to take the camera away from your face. With this, Sony provides the same functionality as the professional cameras of other brands.

The OLED 2.4M dots / 1024 x 768 viewfinder is really nice. You hardly notice that you are looking at an optical viewfinder, but at a little screen in the camera. The viewfinder accuracy of the bright electronic viewfinder is 100% according to Sony. It is pleasant, especially in sunny weather, to use this viewfinder. The viewfinder turns itself on when you bring the camera to your eye, or hangs in front of your belly. 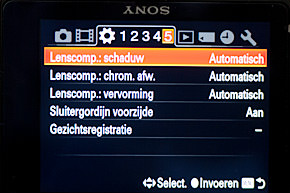 The screen on the back of the camera can be tilted or rotated in 3 directions. The menu of the Sony A77 is very clear despite a large amount of features. Besides the regular menu, there is also a quick menu with settings that you access through a button on the back of the camera. It is nice that the two menus complement each other and do not partly provide the same functionality as you sometimes encounter with other camera brands. The Sony offers the possibility to correct all the in-camera jpg files for vignetting, chromatic aberration and distortion. That is a good development, because this can save a lot of time on finishing for critical photographers. But not all Sony lenses currently benefit from this feature.

The Peaking function at manually focusing highlight in white, red or yellow which is in focus. It is based on an open aperture. The effect of stopping down is not shown.

The Sony A77 delivers, in combination with the Sony 16-50 mm, jpg files with a resolution up to 2500 LW/PH. The resolution remains fairly constant over the ISO range of 50 ISO to 12,800 ISO. At 25,600, the resolution drops to about 1000 LW/PH, probably due to the noise reduction that firmly starts at the highest ISO sensitivity.

With a standard editing of the RAW files in Lightroom, no greater sharpness impression is obtained. The RAW files gave an average resolution of nearly 2000 LW/PH across the ISO range. With cameras from Nikon and Canon, a RAW file gives a higher sharpness impression; at Sony, the resolution of a RAW file that we edited in the same way is just slightly lower than of in-camera jpg files. An explanation for this can be found in the Sony A77 test report. 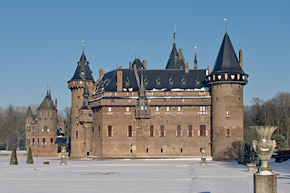 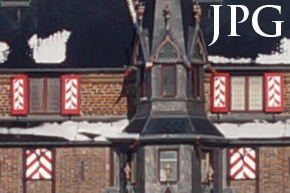 The with Imatest measured total dynamic range of the Sony A77 sensor is dependent on the ISO setting, between the 10 and 13 stops, both for a raw file and for a JPG file. Here, the Sony A77 differs little from other cameras like the Nikon D5100 or the Canon 60D. 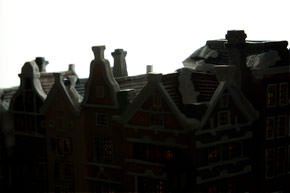 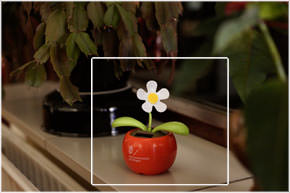 At higher ISO settings, the story is something else. Above the 1600 ISO, you see the noise of RAW files greatly increase and the noise reduction of jpg files proceeds more aggressively. Here you see an image cropping of an ISO 3200 jpg practice shot, made in the dark.

With HDR images, dark areas are lit in the digital darkroom. Here, noise in dark areas becomes much more visibly or even more disturbingly present. This makes HDR recordings, although extreme, good illustrations of the quality of a camera in terms of signal to noise ratio.

Here you see a 100% image cropping of an ISO 200 HDR shot, including standard noise reduction in Lightroom. At ISO 3200, the noise is so strong that the image is no longer usable for HDR. Here, you would have to apply so much noise reduction, you lose a lot of resolution. 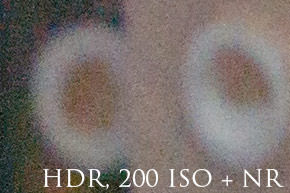 In terms of color reproduction in daylight, all tested cameras are pretty similar so far. The Imatest measurement results in the Sony A77 test report confirm the quality of practice shots.

The Sony A77 delivers saturated images with good color reproduction in daylight. The color deviation (delta E 94) is small for both an in Lightroom converted RAW file and a jpg file (neutral) directly from the camera. The automatic white balance of the Sony A77 does its job well. 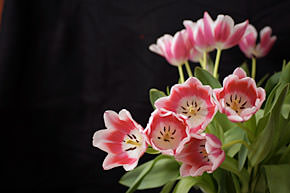 Images made in the shade are sometimes a little too cool or blue, as we noticed during the field test. The Sony A77 is better in terms of color reproduction and white balance in artificial light than previously tested cameras like the Canon 5D MK2, Nikon D700 or Canon 60D. Shots made in artificial light do have a less accurate color reproduction than images taken in daylight. But both can be easily improved with a small manual adjustment of the white balance.

An external flash can be connected to the Sony A77. However, the Sony A77 also has a little built-in flash, which is suitable for lenses having a focal length up to 24 mm. In this test, we have not further investigated the flash. If you buy such a beautiful camera, you should also buy a good flash, I think.

The autofocus on the Sony A77 is fast and accurate. With sufficient light, the camera is confident and quick, suited for sports photography or other sports that require much of the AF speed for sure. In many SLR camera’s, the mirror reflects a part of the light to the AF sensor. If Sony applies the same principle, in low light or with subjects with little contrast, the autofocus on the Sony A77 could in theory start to hunt sooner than with a traditional SLR, because the AF module only has 30% of the light available to him, the rest of the light goes to the sensor. We’ve contacted Sony about this topic: According to the Sony spokesman SLT camera’s are even performing better in low light for AF because the AF sensor has a little bit more wide angle and receives even more light than the traditional SLR’s.

“Also a mirror of a regular SLR (with Live View) is a semi translucent mirror. Most of the light which passes the lens will be reflected to the penta prism to get the image in the Optical Viewfinder. At the same time some of the light will pass this mirror and will be reflected to the Auto Focus sensor situated in the bottom part of the camera. So also in a regular SLR, the amount of light which will reach the AF sensor is quite lower. In my opinion the SLT camera’s are even performing better in low light for AF because the AF sensor has a little bit more wide angle and receives even more light than the traditional SLR’s. And of course the unique benefits of Translucent technology like quick shooting, up to 12 fps / fast recording with moving pictures in screen and last but not least phase detection AF video recording.” 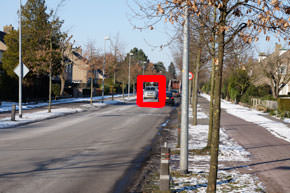 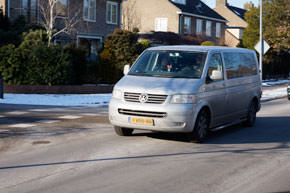 The Sony A77 succeeds in bright light to take a series of sharp shots of a car traveling at 50 km/h right at the camera. This is a very good performance, which makes this camera also a good choice for sports photographers. Until now, of the cameras we tested, the Nikon D700 was the only one capable of this. At the point of autofocus tracking, the Sony A77 leaves for example the Nikon V1, Panasonic G3, Canon 60D or the Canon 5D MK2 far behind.

The Sony A77 is a very good camera with great ease of use. The ease of use is not only because of all the possible functions on the camera, but also because of the accessibility of the menus and pleasant ergonomics. In terms of image quality, this is the best camera with an APS-C sensor that we have tested so far. Sony has managed to make a sensor with low noise and a high dynamic range at the low ISO settings. The sharpness of jpg files is even higher than of the Canon 5D Mk2, a camera with a full-frame sensor.