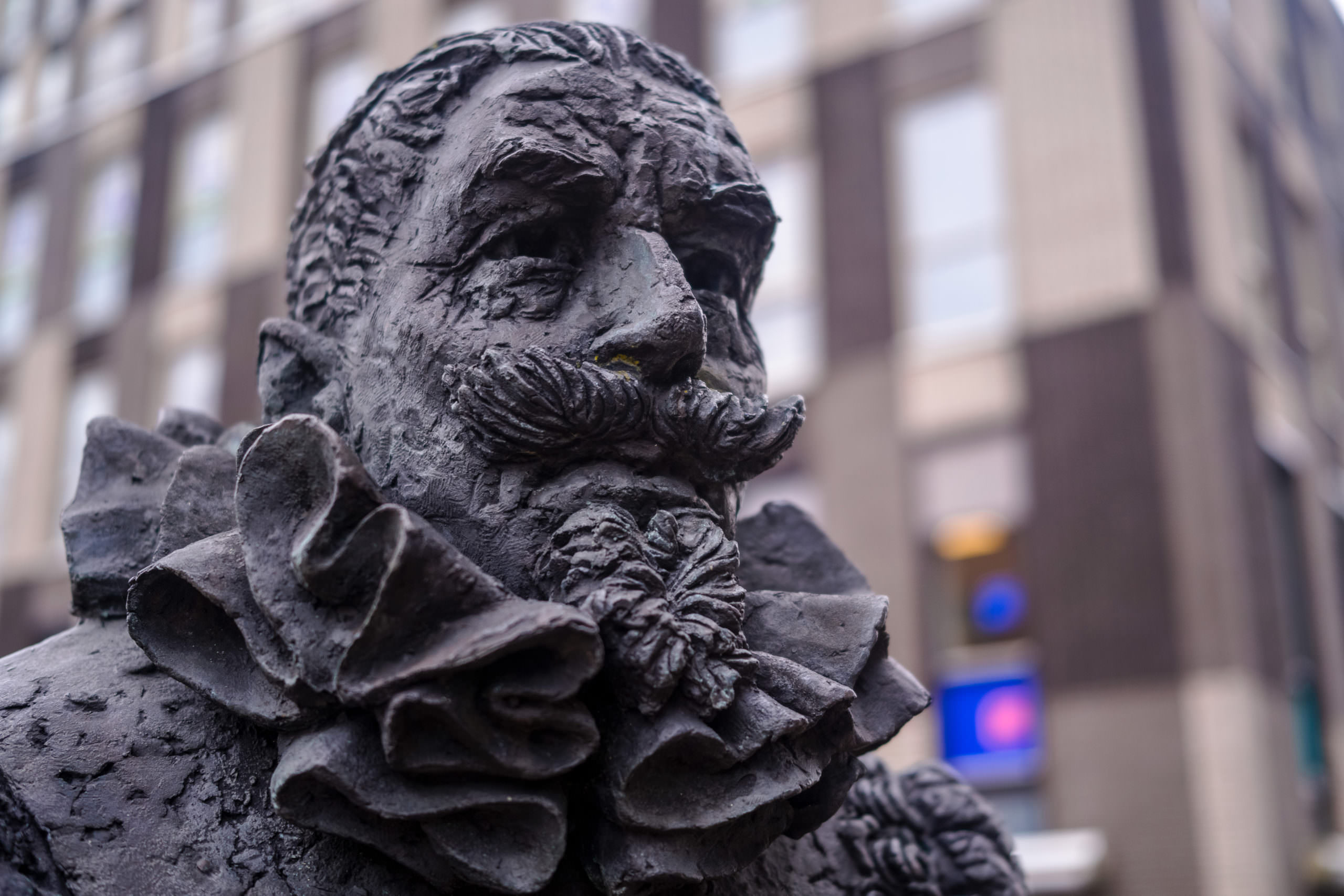 The Sigma FP is the smallest full-frame system camera that you can buy. It is a small, rectangular box with an L-mount, so that you can use Sigma, Panasonic and Leica lenses on it. Sigma is a quirky manufacturer, and you can see that in both the way you can operate the camera and in the very extensive and special video options.

The Sigma FP is Sigma’s first camera since Sigma became a member of the L-alliance, the partnership between Leica, Sigma and Panasonic. The FP therefore no longer has Sigma’s own mount but an L-mount that also fits Panasonic and Leica lenses. With the FP, Sigma has also broken away from the Foveon sensors that were previously found in Sigma cameras. The FP has a seemingly very ordinary 24-megapixel sensor with the Bayer pattern and without an anti-alias filter. However, the Sigma FP is anything but a very ordinary camera.

Sigma is a manufacturer that sails its own course with both lenses and cameras. You can see that in the FP. It is a 24-megapixel mirrorless system camera, but one without a viewfinder, without a turning and tilting screen, without a physical shutter and without a grip. What the camera does have is a large heat sink behind the sensor and a switch that allows you to choose between filming and photography. That gives a hint of where the true power of the FP lies: video. As a very compact and fairly subtle full-frame system camera, the FP works well, but as a video camera, the FP has little competition. 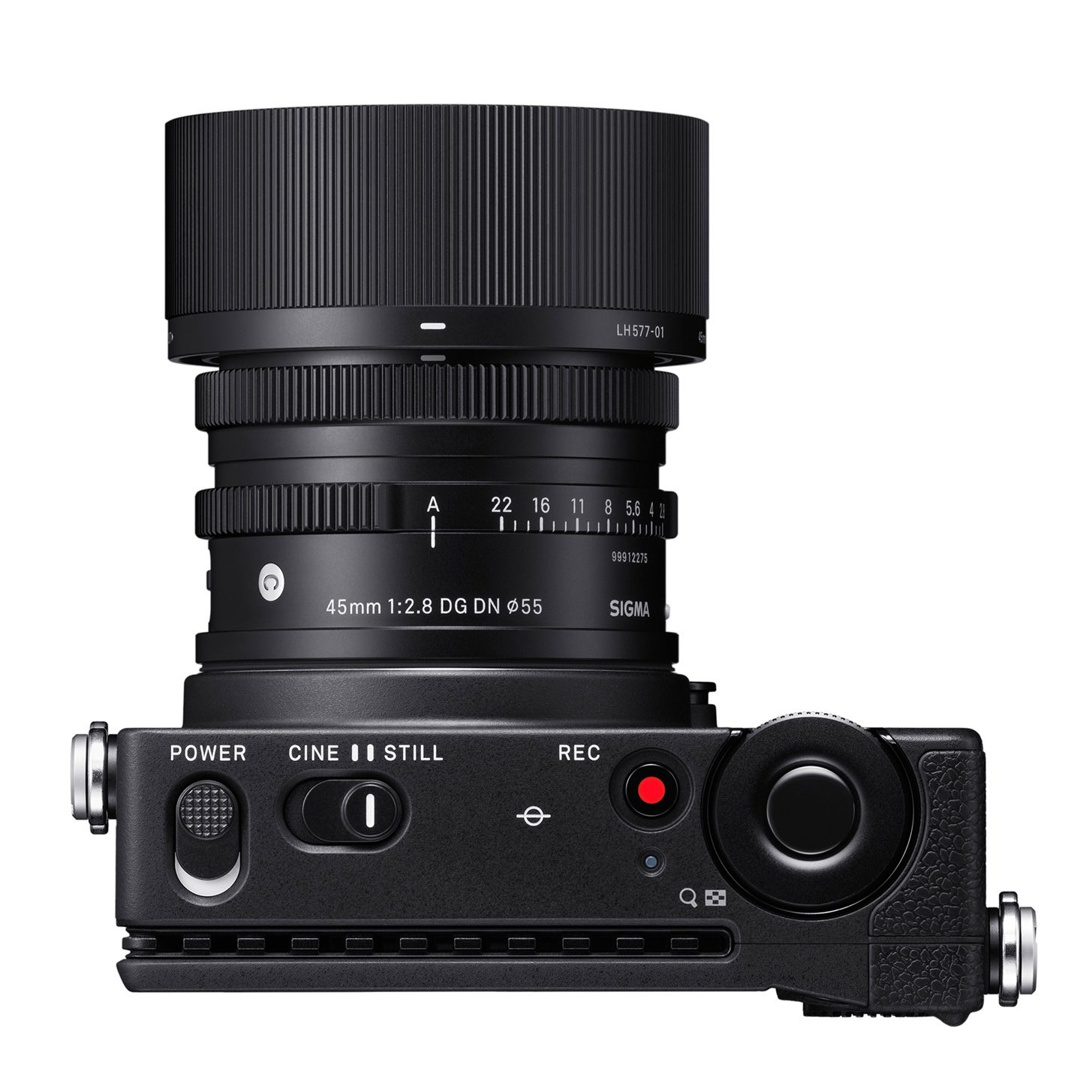 What is immediately striking about the FP is the shape and dimensions. The camera is a rectangular box without a grip, and it is very small. The camera owes these dimensions in part to the omission of a physical shutter. You can therefore only use the electronic shutter on the sensor.  Fortunately, that is a fast BSI sensor, so that rolling shutter is not completely absent, but it is as small as possible. On the outside, the FP is just as unique. The front is dominated by the L mount. And actually the only other thing on the front is the release button. On the top cover is a large control dial with shutter release button, sunk into the cover, two slide switches and a separate record button. That is a very different format than for all other system cameras on the market. You can also see the ridges of the sensor’s heat dissipation on the top. This makes it seem as if the camera is open, but the Sigma is indeed weatherproof and impervious to dust and splash water. On the back is a large, touch-sensitive screen. It does not turn or tilt. Next to the screen are a few buttons and a rotary wheel, and under the screen is a thin border with a number of buttons.

On the sides, the eyes for attaching a strap are very striking. But the camera does have threads on both sides for attaching accessories. These can be eye for a strap but also other accessories. For example, that can be an accessory that gives the camera an active hot shoe, but also a holder for an HDMI cable. One of the covers on the contacts can be completely removed for this. The camera is small but feels very solid and heavier than the 370 gram weight (without battery) suggests. The camera does not have a viewfinder or hot shoe, but it can be equipped with a magnifying viewfinder on the screen, and a separate hot shoe can be screwed on the side. 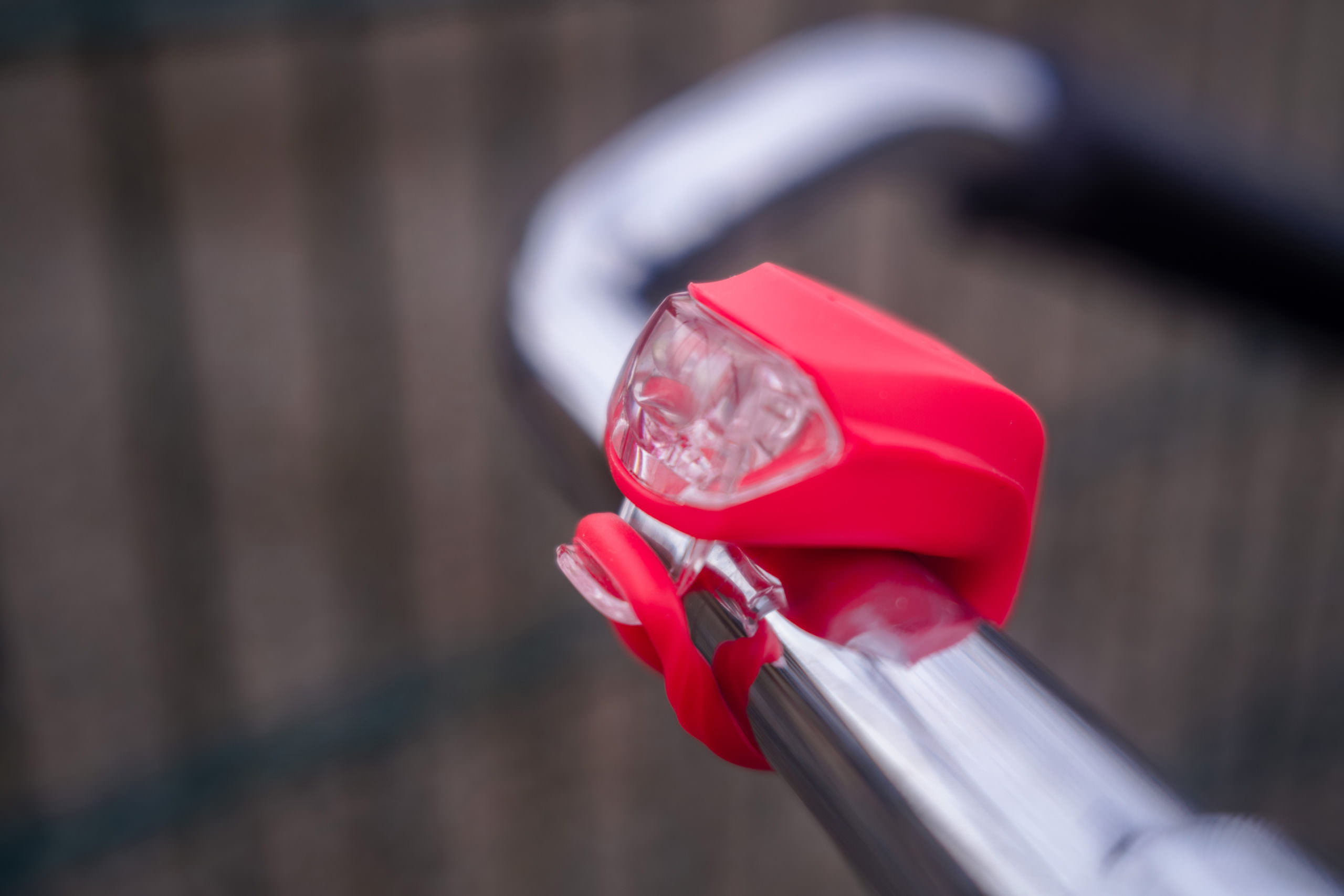 The Sigma FP has its own operational logic. On the top, it starts with two switches, and you have to use both before you can do anything with the camera. The first is the slider to turn the camera on, and the second is the slider to choose between film or photography. If you choose photography, you will get all the functions you need in the menu; if you choose film, then you will only get the film functions, and you will no longer see any options for photography. The FP also has no rotary switch for exposure mode, but a push button at the bottom on the back. Next to that mode button are two similar buttons for ‘tone’ and ‘color’. You rarely find those on system cameras. 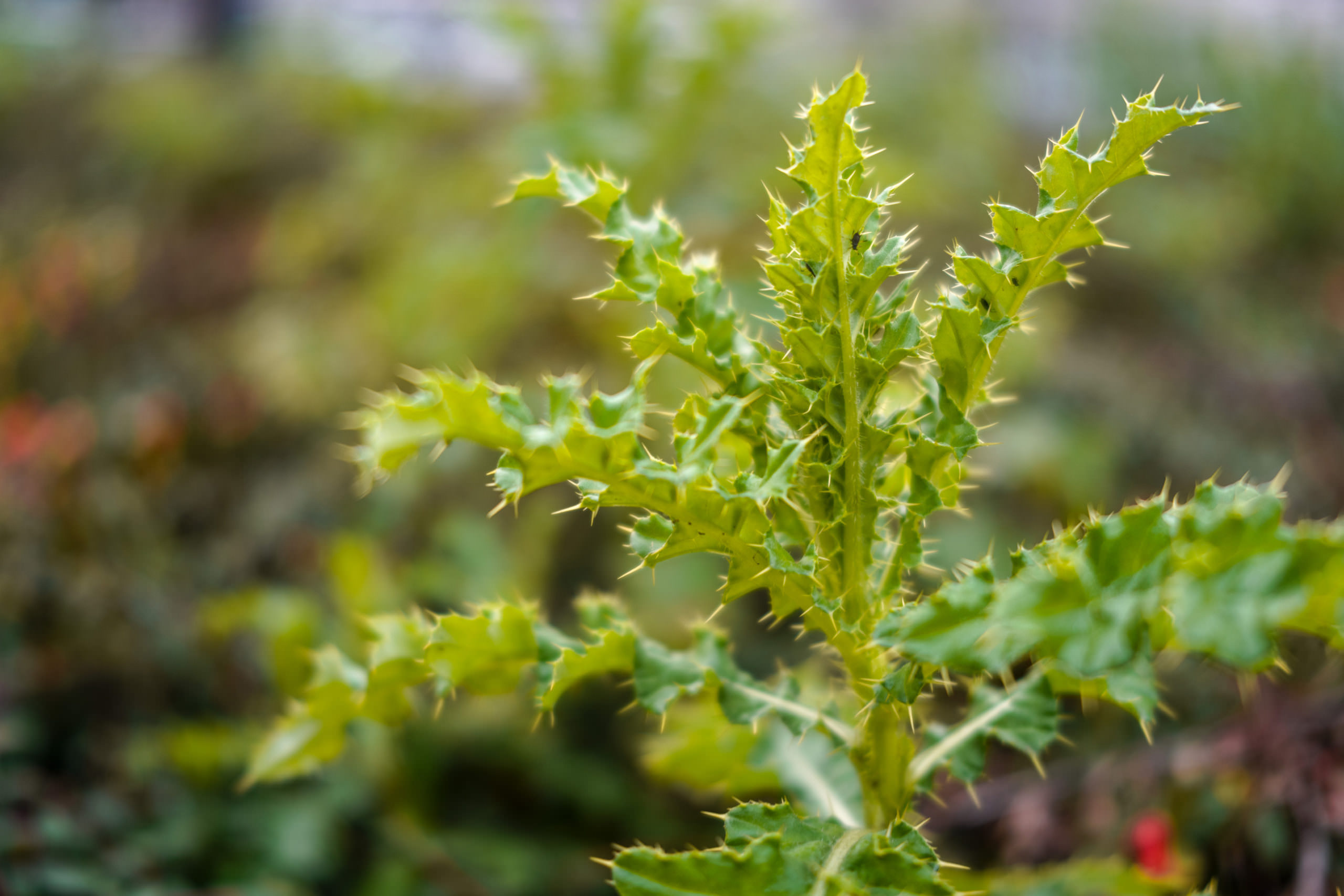 The Sigma FP has a 24-megapixel sensor without anti-alias filter. The image quality of the camera is therefore roughly comparable to that of, for example, the Panasonic S1, which has the same number of pixels. Both the sharpness and the dynamic range are good, although the standard sharpening is a bit on the low side. But that offers the user the opportunity to improve the images. Due to the absence of an anti-alias filter, you naturally run a little more risk on moire than with cameras that do have such a filter. On the other hand, by omitting such a filter, the sharpness that you get from the sensor is maximum. The sensitivity is adjustable from 100 to 25,600 but can be extended to ISO 6 on the low side and ISO 102,400 at the top. The ISO 6 in particular is unusual. It ensures that as a filmmaker you will probably not have to resort to extra ND filters as quickly.

If you set the Sigma FP to Cine with the large slider on top of the camera, the FP will become a real video camera. The menus then change so that you only see the video functions. And those are extensive. The camera can film in MOV or CinemaDNG in 8 bit on a UHS II SD card and even in 10 or 12 bit if an external SSD is connected. That SSD can be connected directly to the USB-C port and is then powered from the camera. It is also possible to send an image directly to an Atomos Ninja Inferno. In 4K, 3840×2160 pixels, the FP can film up to 30 images per second, and in Full HD, up to 120 images per second and even in All-I if you wish. On the camera you can choose both to set a shutter speed and to set a shutter angle. The camera does not (yet) have Log profiles or LUTs, but it does offer a wide range of profiles that can also be adjusted. The screen offers you as a videographer almost all the information you want. For example, you can use a waveform display. But what is oddly enough missing on the FP is a headphone input. Hopefully, an accessory will become available for that. Due to the compact dimensions and the extra attachment points on the camera, it is easy to build the camera into a video set and to fit it with an extra monitor, SSD and other things that are important for filming.

The autofocus of the Sigma FP has 49 fields that can be selected both via the selection wheel on the back of the camera and via the touchscreen. The size of the AF fields can also be adjusted, from very small for very precise measurement to quite large so that you are sure that you will not miss your subject. Both the speed and the accuracy of the autofocus are pretty good, although we have not tried the FP in sports situations. The FP has a system that is based on contrast detection, and that is not ideal for fast sports photography. The FP is also not the ideal camera for that. We did look at the low-light performance and the ability to follow quietly moving subjects, and that generally went well. The Sigma FP has eye and face recognition and a Tracking AF mode that works reasonably well. In low light, the camera can focus down to -5EV with an f/1.4 lens.

In addition to the way in which the Sigma FP can be used as a video camera, the expandability of the Sigma FP is one of the most important and unique features. A viewfinder is available for the camera that can be screwed onto the underside, two handles that can be attached to the right side and accessories for attaching a flash or securing the HDMI cable that can be screwed on the left side. The FP even has a Director’s Viewfinder function. The Sigma FP can simulate the image of various high-end film cameras like the Sony Venice and various models of Arri and RED and can show you what image you will get with a certain field of view.

RELATIVE TO THE COMPETITION

It makes little sense to compare the Sigma FP with other 24-megapixel system cameras such as the Sony A7 III or the Panasonic S1.  The FP is too different for that. You should rather compare the camera with other real hybrid cameras such as the Panasonic GH5, Panasonic S1H and the Sony A7S II. The latter two have in common with the FP that they both have a full-frame sensor and can film without a crop. This gives you as a filmmaker the option of filming with a very small depth of field. The S1H has – just like the FP – an additional heat sink to prevent overheating. But what none of these three cameras has is the ability to film in Cinema DNG. And the FP can do that. This brings the FP closer to the Blackmagic Pocket Cinema Camera. However, that has not been developed as a hybrid camera. And photography is also great with the Sigma FP. In short, the FP is in a class of its own. 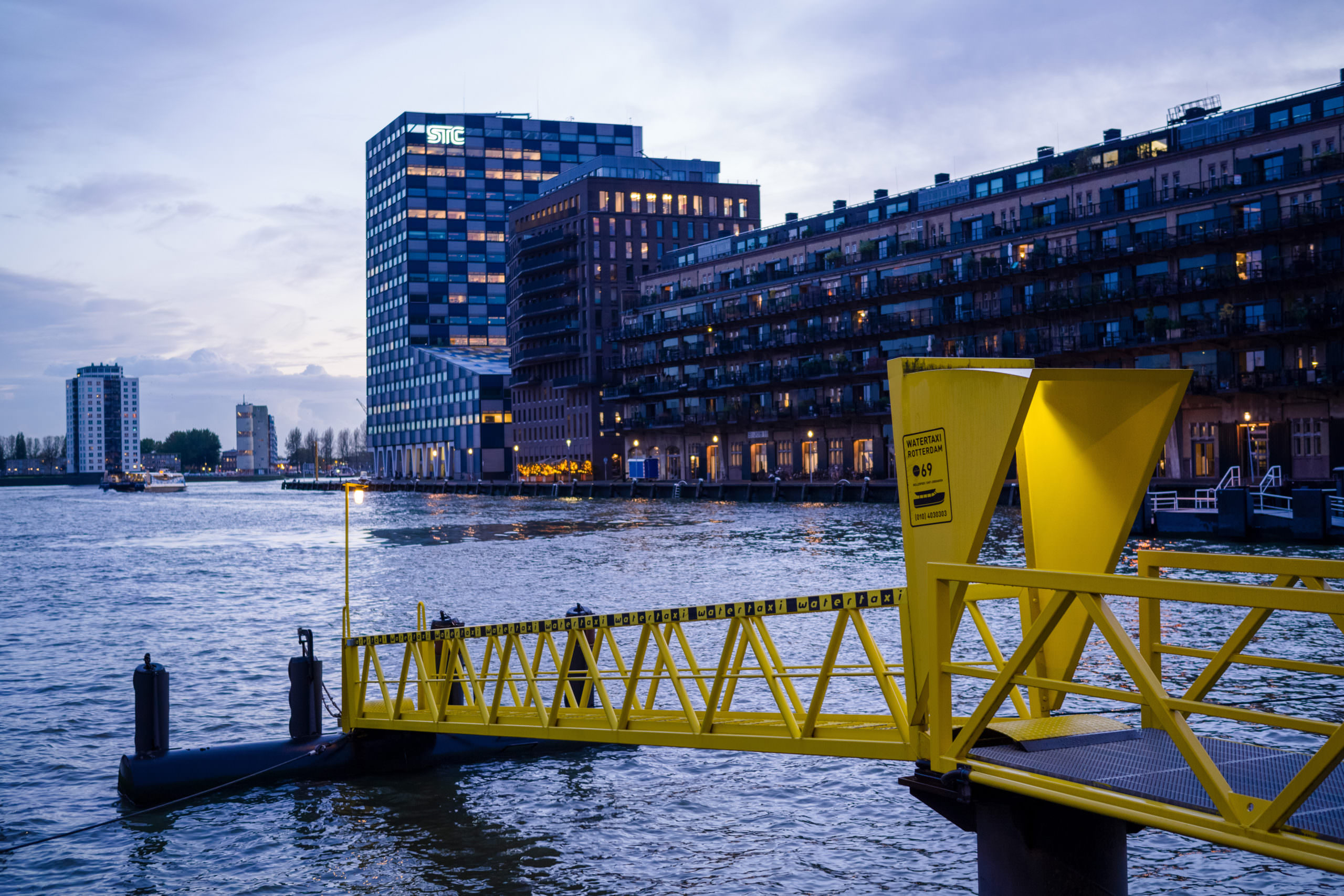 Curious about the performance of the Sigma FP in practice? Click on the button below and visit our renewed web gallery with sample images. The images can be downloaded in full resolution to be viewed at 100%.

The Sigma FP is a very special camera that you can use as a compact full frame but that excels especially when you start filming with it.

The Sigma FP is a camera that you might buy if you are looking for a very compact, full-frame camera with interchangeable lenses. Then the FP is simply the smallest. But the lack of image stabilization and the absence, for now, of a choice of compact lenses – the Sigma 45mm f/2.8 is currently the smallest – makes it not ideal as a compact camera. The Sigma is by far the best full-frame system camera to film with. So if you want to photograph and attach great importance to video, then the FP is a good choice. The camera is also ideal as a video camera in a set with a Leica or Panasonic camera for photography. The Sigma FP is a unique camera that may not be for everyone, but it will undoubtedly have a whole host of loyal fans.