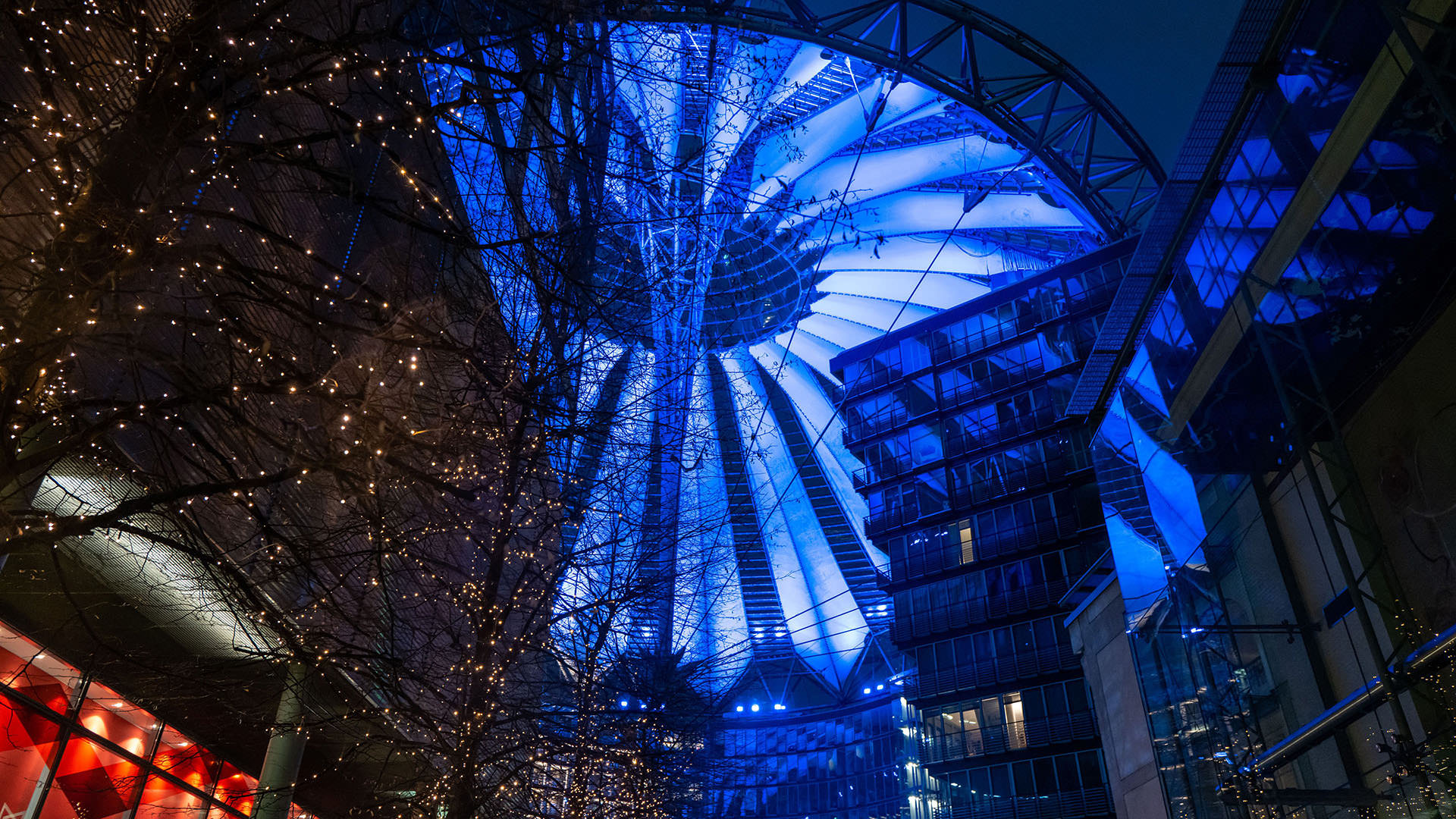 The Panasonic Lumix S Pro 24-70mm f/2.8 is a bright standard zoom for the full-frame Panasonic S cameras. The only other zoom in this range until now was the Lumix S 24-105mm f/4 Macro OIS, which is one stop less bright and not a lens from the S Pro series. The Lumix S Pro 24-70mm f/2.8, with its more robust construction, better sealing against dust and moisture and higher brightness, is much more the right lens for the discerning photographer. The excellent manual focus and the absence of focus breathing also make it an ideal choice for videographers.

The Lumix S Pro 24-70mm f/2.8, with its more robust construction, better sealing against dust and moisture and higher brightness, is much more the right lens for the discerning photographer.

The Panasonic Lumix S Pro 24-70mm f/2.8 is the universal standard zoom that should of course not be missing from the S system.  The Panasonic S cameras are made for professionals and those amateurs who are looking for the benefits of a Panasonic camera in a model with a bigger sensor and better image quality than the well-known Micro Four Thirds cameras from Panasonic. Quality, robustness and good ergonomics are therefore more important in the S system than, for example, compactness or low weight. After all, these are things that you already find with the smaller G-system from Panasonic. 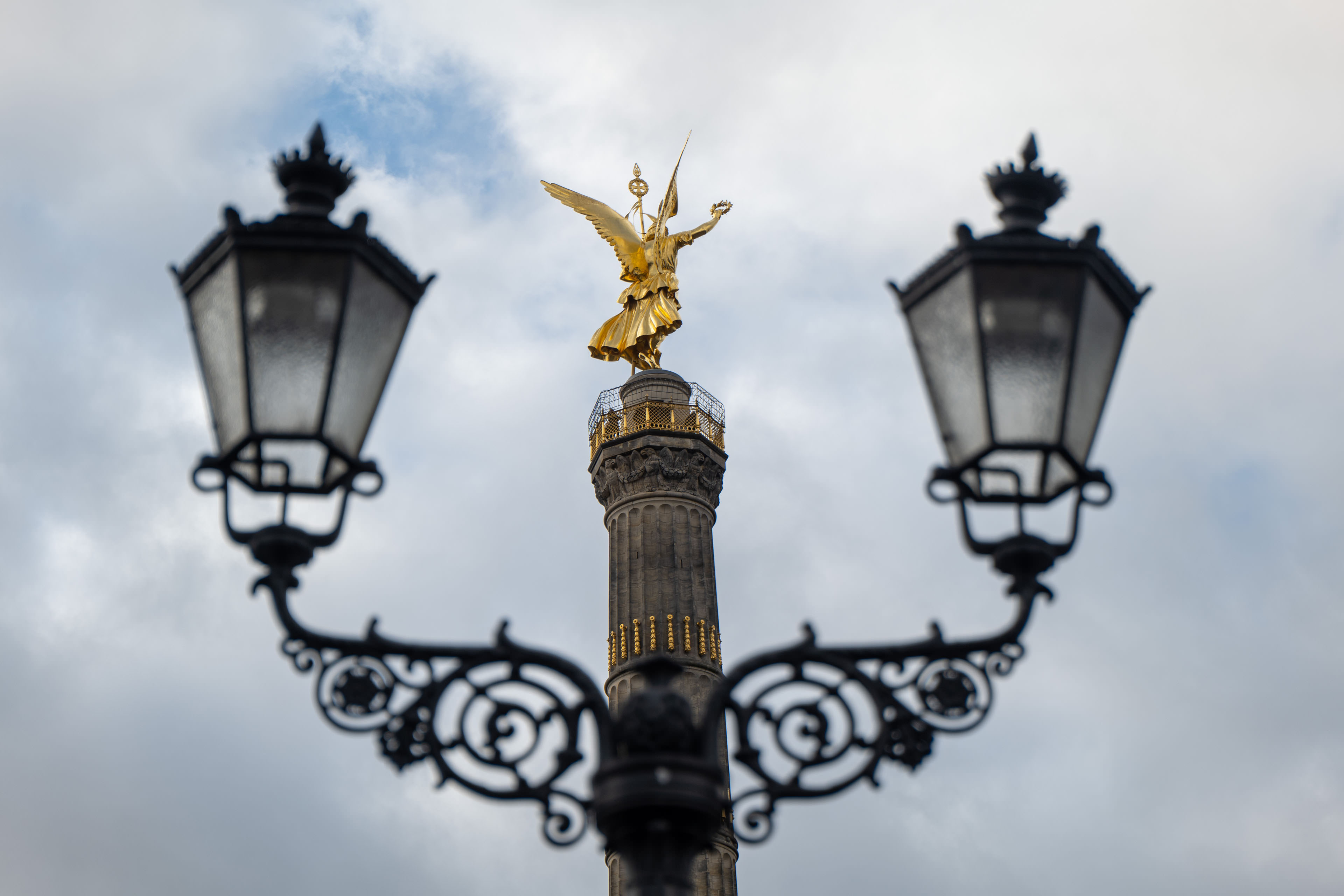 The above qualities are therefore exactly what you will find on the new Panasonic Lumix S Pro 24-70mm f/2.8. It is a big lens that fits comfortably in the hand and is easy to operate with its wide rings for focusing and zooming. The weather resistance is excellent, as we could see during some pretty wet testing days in Berlin, and the image quality is exactly what you expect from a lens in this price range: high. 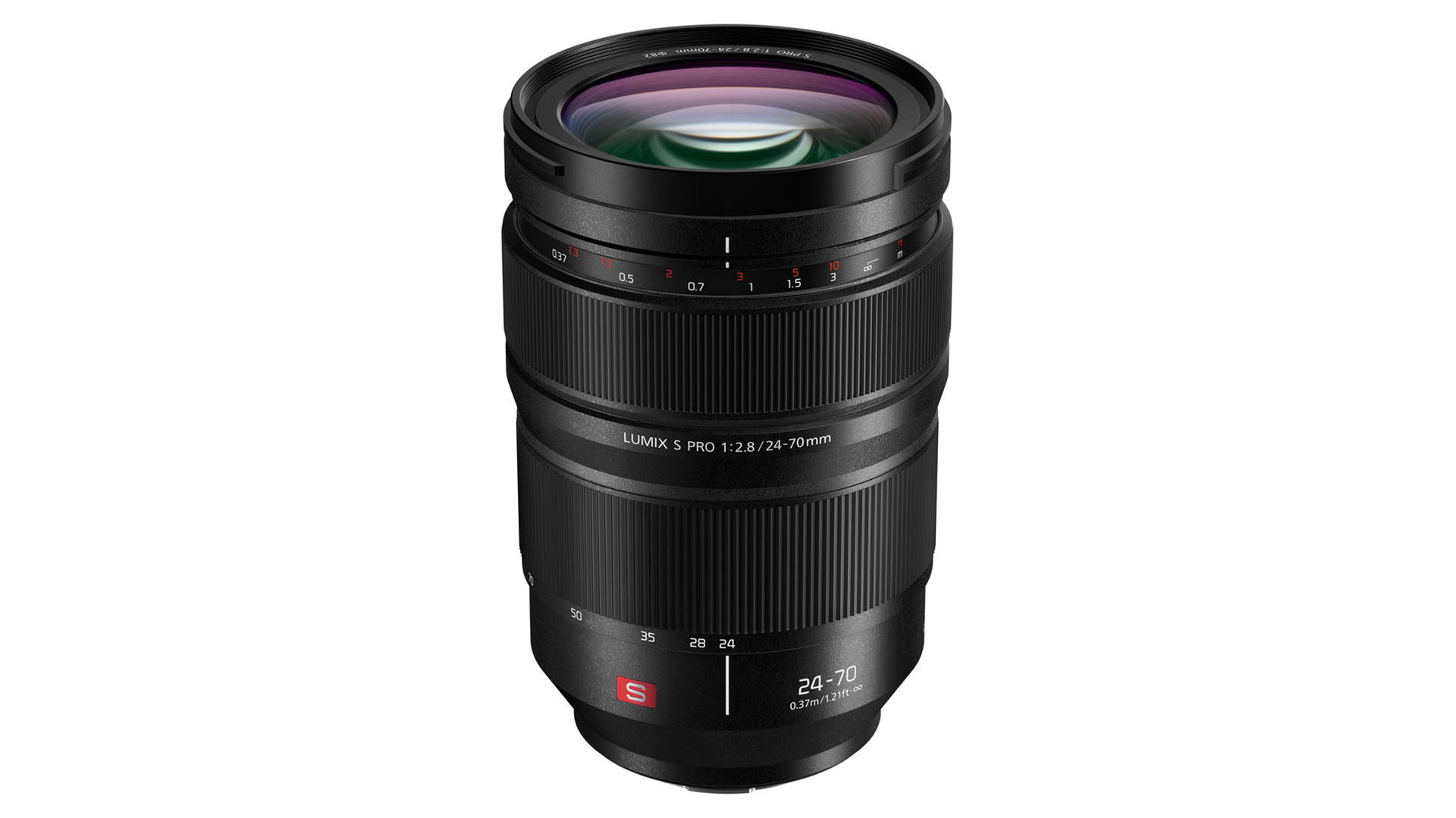 The Panasonic Lumix S Pro 24-70mm f/2.8 is a big lens. It is 140mm long and almost 91mm in diameter. The filter size is 82mm, and the weight is 935 grams. Together with a camera body, you have about 2 kilos in your hand, and you feel that. That weight is partly due to the complex optical design. This consists of no fewer than 18 elements in 16 groups. All that weight also has a positive effect: the Panasonic Lumix S Pro 24-70mm f/2.8 feels very solid. As with the Lumix S PRO 70-200mm f/2.8 OIS, this lens is completely free of play, and the rings rotate with just the right amount of resistance. The zoom ring is closest to the camera and has a slightly smaller diameter than the focus ring, which is a little further forward. The focus ring is about the same width. There is enough space between the two rings to ensure you will never confuse one for the other. The shortest focusing distance is 0.37m, which gives an image ratio of 1:4, or 0.25x. The diaphragm has 11 blades. This makes the aperture nice and round, even if you stop down a bit.

The autofocus is, as on all Panasonics, a DFD system. That means that the camera only uses contrast detection, but then in the Panasonic way. Panasonic cameras recognize the blur of the Panasonic lenses and can therefore immediately focus in the right direction. Almost as if it were a phase detection system. Almost. In S-AF, the autofocus is very fast and very accurate. In continuous autofocus, you can still see small corrections while focusing. When you take pictures, you will not be bothered by that too much, because the system corrects so quickly that you still get a lot of sharp pictures. For video, it’s a challenge, because with C-AF you record all those small corrections. So you are better off doing serious filming with manual focusing. Real videographers will think that’s the only way anyway. Fortunately, the focus ring has what’s called a focus clutch. That is a link with the focus motor that you establish by pulling the focus ring back slightly. When you do that, you will see a scale with the focusing distance in feet and meters, and you have stops at infinity and close. You can turn the ring further, but you feel when you have passed the extreme point of the focus range. It works quickly and intuitively and has the advantage that you can easily set a focus distance without holding the camera to your eye. That’s handy both for focus pulls during filming and for street photography. If you make a focus pull, shifting the focus from one subject to another, the Panasonic Lumix S Pro 24-70mm f/2.8 offers something that few other lenses have: a lack of focus breathing. When shifting the focus with this Panasonic Lumix S Pro 24-70 mm f/2.8 OIS, you hardly see a difference in image size, whereas with many other zooms you get the impression that you are zooming when you are only changing the focus. To top it all off, the focus peaking in the viewfinder or on the screen on the back shows you where the focus is, so you can move it very precisely during filming and turn it to the right new focus point in one go. 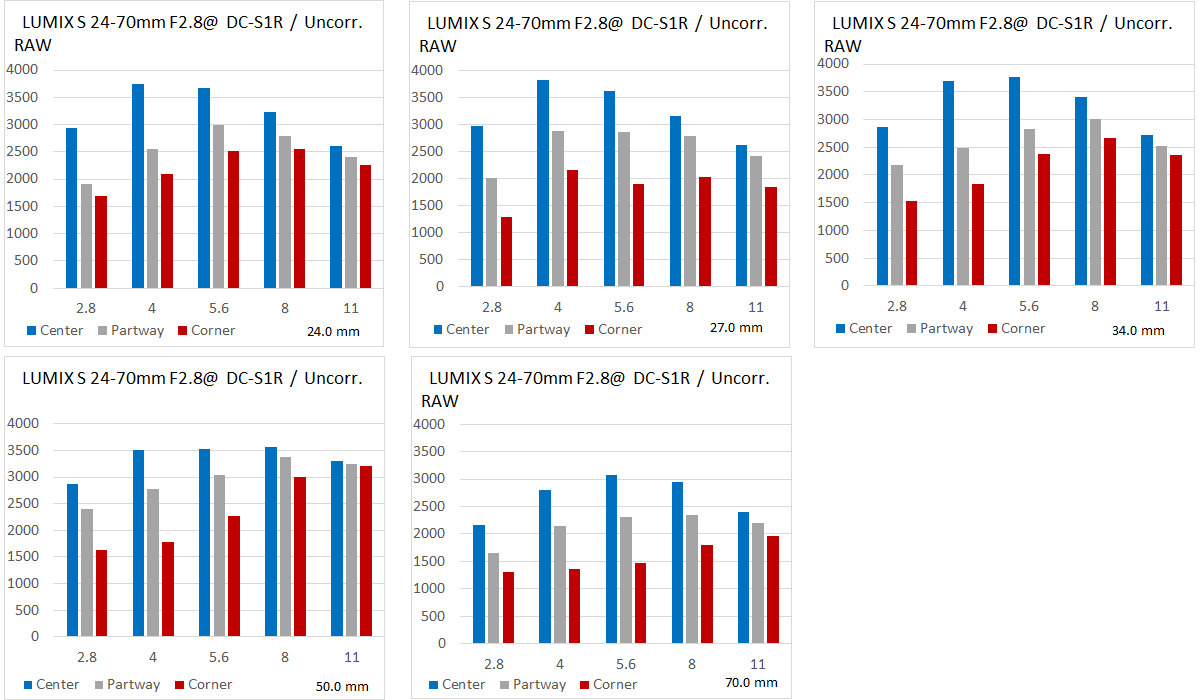 The Panasonic Lumix S Pro 24-70mm f/2.8 is good.  At full aperture, the sharpness is still slightly lower than the maximum value, but you also only need to stop down for the best result. There is a gradient in the sharpness from 50mm to 70mm, where the sharpness decreases slightly.

The vignetting is highest with the wide-angle setting, with a gradual gradient to 70mm. But we find a full stop at f/2.8 on 24mm and a half stop on 70mm in RAW hardly worth mentioning. After applying the lens corrections, hardly any of it remains. If you like a vignette around the photo, you will have to add it in the post-processing.

The distortion in RAW is much higher than we see with the Lumix S Pro 70-200 mm f/2.8 OIS, but, as with many modern lenses, that actually doesn’t mean much. Still, distortion of almost 6 percent barrel-shaped on 24mm is quite a lot. At 70mm, we measured just over 1% pincushion-shaped. The lens corrections in the camera make the lens almost distortion-free from 35mm. At 28mm, it is about 0.3% barrel shaped and about double that at 24mm. 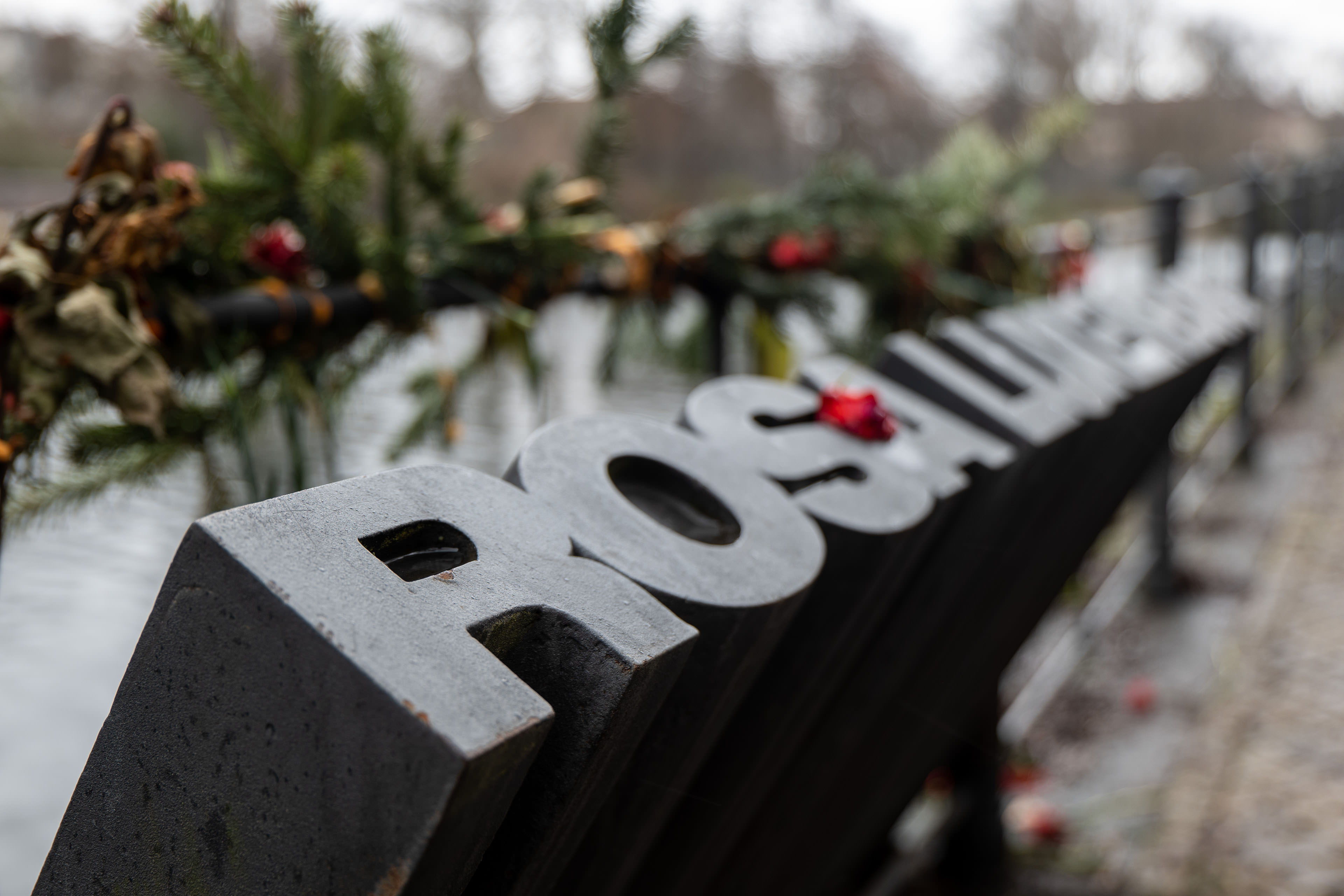 The bokeh of the Panasonic Lumix S Pro 24-70mm f/2.8 is pretty nice. At full aperture, bokeh balls are nicely round, almost to the edge of the image, and you see little sign of the dreaded onion rings. If you have no lights in frame, you still get a nice bokeh, with a quiet, blurred background without hard lines around the blurred parts.

The Panasonic Lumix S Pro 24-70mm f/2.8 has no image stabilization in the lens. So you cannot use the double stabilization that you get if both the camera and the lens have stabilization.  But the stabilization in the sensor can effortlessly handle the short focal lengths of this lens. On cameras with high-resolution sensors such as the Lumix S1R, the old rule of 1/focal length no longer applies as the slowest shutter speed. You can clearly see that in the graph. At 50mm, you can see that at 1/100 second, you already get a sharper image with image stabilization. The sharpness then gradually decreases until you are at about 0.6 seconds and then drops off quickly.  But even at 1.5 seconds you get an even sharper result with stabilization than you get at 1/25 second without.

Curious about the performance of the Panasonic Lumix S Pro 24-70mm f/2.8 in practice? Click on the button below and visit our renewed web gallery with sample images. The images can be downloaded in full resolution to be viewed at 100%.

The Panasonic Lumix S Pro 24-70mm f/2.8 is a great standard zoom for the Panasonic S cameras. It offers photographers everything you would expect from a zoom in this class, with good image quality and high brightness. The focus clutch is a nice extra if you like manual focus. If you also want to film with, for example, the Panasonic Lumix S1H, then this Panasonic Lumix S Pro 24-70 mm f/2.8 really has something special. Due to the lack of focus breathing, you can make the most beautiful focus pulls with this lens. Because the Lumix S Pro 24-70mm f/2.8 is so good for video, it is a pity that this lens does not have an aperture ring that you can make clickless. If it did, this would be by far the best hybrid full-frame standard zoom. It is a minus that we really should not call a minus, because it’s rarely available on the competition, but with all these plus points, that would have completely perfected the lens. Nevertheless: highly recommended.