The packaging of the Nikon AF-S 200-500 mm f/5.6E ED VR will not easily go unnoticed. That is a colossal, gold-colored box of more than half a meter tall—and with a significant girth—that will make the hearts of many photographers beat more quickly. In that enormous box sits an affordable (list price of €1599), bright (f/5.6) Nikon super-telephoto zoom (500 mm!) for outdoor sports, action or nature photography. A reasonably compact zoom lens that is designed for cameras with an FX sensor, but can be used at least as well on cameras with a DX sensor. The Nikon 200-500 mm is significantly less expensive than the Nikon 200-400 mm f/4G ED VR II and Nikon 80-400 mm f/4.5-5.6G ED VR and looks like it can become a solid competitor for the Tamron 150-600 mm and both Sigma 150-600 mm (Sports and Contemporary) super-telephoto zooms. After we previously tested the Nikon 200-500 on a Nikon D7200, we look at the performance this time in combination with a Nikon D810.

Not only the packaging, but also the 95-mm filter size is impressive. The large front lens is provided with an innovative Fluorine coating, which offers extra protection against grease and moisture. The function of this coating, which is currently still only applied to very few, and mostly also more expensive, lenses, is demonstrated in this video from Nikon Europe.{youtube}eDJkDq-bxUw{/youtube}Even more fun than this image excerpt from a shot of a deer at dusk on the high Veluwe made with a Nikon D810 @ 500 mm f/5.6 would have been a shot made with a wide-angle lens of the dozens of photographers who gather every evening in the parking lot in order to capture this beautiful spectacle. 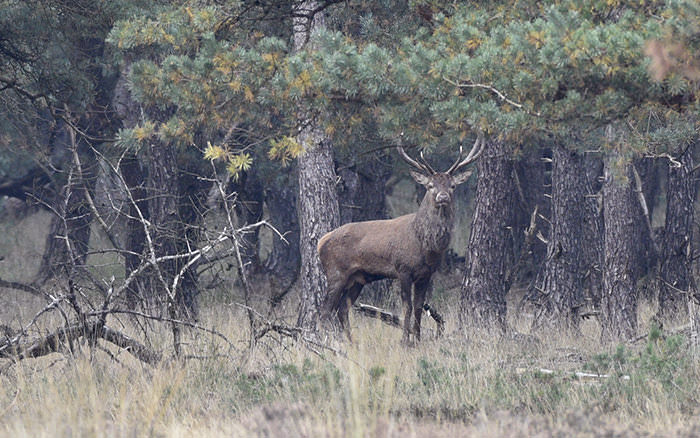 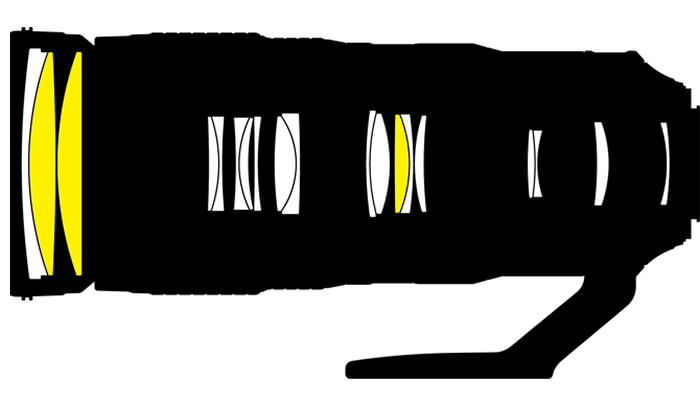 The complex lens design of the Nikon 200-500 mm consists of 19 elements, of which 3 are extra-dispersion ED elements (shown in yellow), in order to prevent color separation (chromatic aberration), in 12 groups. The lens comes with a tripod collar, with which you can transition the camera from landscape-position to portrait position without having to remove it from the tripod—and a soft lens bag.

There is a significant change in the name of the Nikon AF-S 200-500 mm f/5.6E ED VR, that you can recognize by the E after f/5.6. An electromagnetic aperture can more consistently open and close quickly than the mechanical shutter that Nikon used until now. During fast continuous shooting, more precise exposure thus becomes possible. The disadvantage of an electromagnetic aperture is that this only works on modern Nikon cameras. On an older camera, only f/5.6 is available to you. Even that is not an insurmountable objection for an extreme telephoto lens with very good sharpness at full aperture.

The Nikon 200-500 mm does not have a large filter diameter (105 mm) without reason: vignetting is—partly thanks to the large lens surface of the front lens—striking low at full aperture; only between 400 mm and 500 mm with the half stop of vignetting be visible. After 1 stop stoping down, there is a bit less than a half stop of vignetting present only at 500 mm. That is just very good. We regularly encounter more than two stops of vignetting when testing lenses on a camera with an FX sensor.

With direct backlighting, or if you do not use the lens hood, you can see green ghosts and a decrease in contrast with strong backlighting. If you compare the Nikon 200-500 mm with Nikon zooms that are fitted with Nano Crystal Coat, like the Nikon 200-400 mm, then you notice that the Super Integrated Coating that is used in the Nikon 200-500 mm is less effective than the Nano Crystal Coat. Always use the included lens hood with backlighting.
Distortion is—as with so many telephoto lenses—pincushion-shaped and about 1% across the whole range. I did not find any lateral chromatic aberration, colored edges at sharp contrast transitions in the corners of the image, and longitudinal chromatic aberration (“color bokeh”)—not in practice shots and not in the Imatest measurements.

The optical performance of the Nikon 200-500 mm is, in short, outstanding. 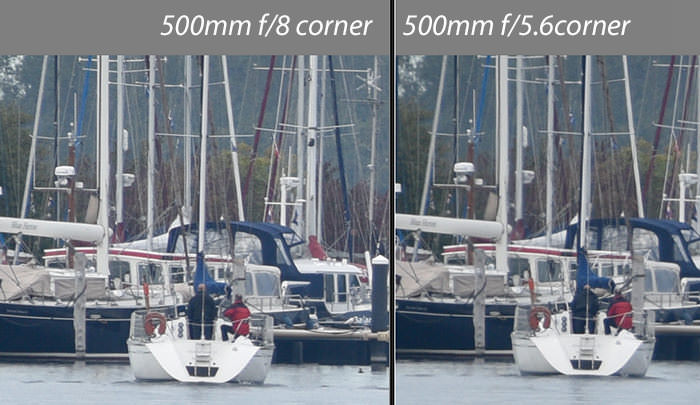 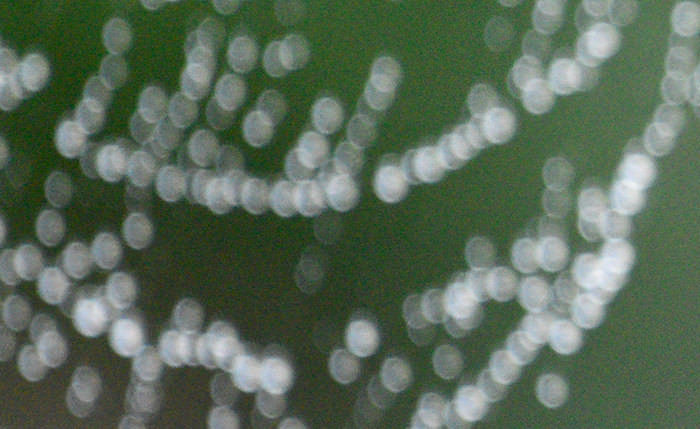 It is not fair to compare the Nikon AF-S 200-500 mm f/5.6E with—much more expensive—bokeh champions like the Nikon 300 mm f/2.8, Nikon 400 mm f/4 or Nikon 200-400 mm. The long focal length, the 9 rounded aperture blades and a good lens design give the 200-500 mm with a beautiful bokeh and a fluid transition from sharp to blur. A sharp light point in the background sometimes creates a bokeh with an edge.

The Nikon 200-500 mm is an affordable, bright Nikon super-telephoto zoom for outdoor sport, action or nature photography that performed outstandingly in our test.

A lens of two kilos and a shop price of more than 1000 euros is not for everyone. Even so, you get a great deal back if you choose this lens. This is one of the first Nikon lenses with a dirt-repellent fluorine coating on the front lens and an electromagnetic aperture. The image stabilization/vibration reduction works perfectly, and the Sports VR is a solution. Build and image quality offer a fantastic price-to-quality ratio: for a little bit more quality, you will have to spend a great deal of money.