The Nikon AF-S 300 mm f/4E PF ED VR is a bright telephoto lens, suitable for nature, sport and landscape photography, in particular because this lens—thanks to an innovative design—is so noticeably small and light that you will much prefer taking the Nikon 300 mm f/4 PF along on a trip than a regular 300 mm f/4. This lens is equipped with super-fast auto focus and effective image stabilization, according to Nikon, good for 3 stops. It is not an inexpensive lens, but it is also intended for the highly demanding (semi-)professional who sets the highest demands for optical and mechanical quality. We reviewed it on a D810 full-frame body. Read on to see whether this lens is worth its reputation and price. 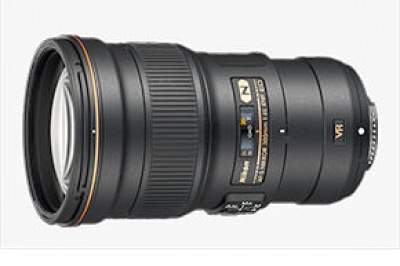 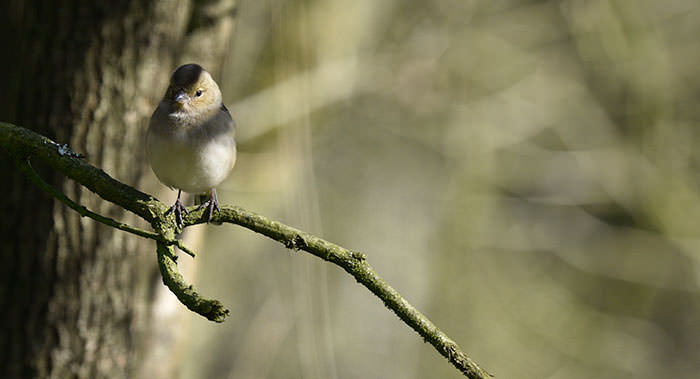 Nikon AF-S 300 mm f/4E PF ED VR @ D810, 1/800 sec, f/5.6, 640 ISO
The illustrations with this review (crops of jpg pictures shot by hand without image stabilization) are shot through double glass out of the living room and compressed for the internet. Without double glass in front of the lens, or after you have carefully edited your RAW shots, the results are even sharper..

If you want to work for a long time with a light telephoto lens with high image quality, then you can’t beat the Nikon AF-S 300 mm f/4E PF ED VR. The two most notable features of the Nikon 300 mm f/4E PF ED VR are naturally the compact dimensions (15 cm is unbelievably short for a 300 mm FX telephoto lens) and the low weight: 750 grams. If you compare that with what you can consider as its predecessor, the Nikon AF-S 300 mm f/4, then that is nearly half.
As is fitting for a high-end lens, the Nikon 300 mm f/4 is equipped with the newest innovations. This lens has an electromagnetic aperture, which ensures more accurate exposure when shooting at high framerates. I think this is the second Nikon lens with Fluorcoat. Nikon’s Fluorcoat repels water, dust and dirt, without any cost to image quality. With this coating, the durability increases, and the glass can be easily cleaned without damaging the surface. Because this 300 mm lens is so compact, you do not necessarily need a tripod collar, and it does not come with one. The RT-1 tripod mount ring is for sale as an optional accessory, allowing the lens to turn freely between the vertical and horizontal mode. 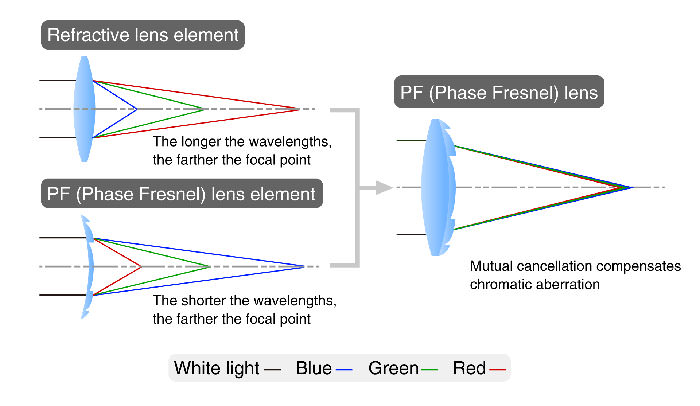 A fresnel lens is a special, ribbed lens that is used, for example, in lighthouses, overhead projectors and in viewfinders of SLR cameras. The big advantage of a fresnel lens is the smaller thickness, which leads to not-insignificant weight savings and a shortening of the lens. Due to the smaller thickness, the absorption is also more limited/the transmission is greater, so that images remain richer in contrast. Nikon has combined a regular lens element with a fresnel lens, resulting in a Phase fresnel lens. The use of a Phase Fresnel lens element (PF) provides both shorter length and a remarkably lower weight of the lens, without—according to Nikon—any decrease in the image quality. The Phase Fresnel lens element has an important additional advantage: it compensates for chromatic aberration. Most lens elements cause color separation (chromatic aberration), whereby red, green and blue light no longer fall at exactly the same place on the sensor. In particular, wide-angle and telephoto lenses can have trouble with this, if it is not specially corrected for with achromatic lens elements or apochromatic lenses made of high-quality glass types. Usually, lenses become heavier and more expensive due to the application of extra lens elements made from special, high-quality glass types. Application of a Phase Fresnel lens to prevent color separation is an original solution. I only know a couple of DO telephoto lenses from Canon that are designed with the same goal (weight savings with high-quality telephoto lenses.

This 300 mm telephoto lens is outfitted with built-in vibration reduction technology. According to Nikon, that’s good for 3 stops. This time, we did not test the image stabilization, since Nikon made a service report that the lowest serial numbers of this lens (the firmware of lenses with a serial number of 205101 or higher has already been updated) need to undergo a firmware update, so that the VR can achieve better results on a Nikon D800, D800E or D810 (our test camera).
Vibration rereduction and short shutter times go together with difficulty: the VR needs some to do its work, and if the shutter time is too short, then shots without VR are sharper. On the other hand, you do want the VR to engage during focusing, because that produces a quieter image. Focusing with a long telephoto lens is often difficult because without image stabilization, the viewfinder image varies so strongly. Nikon has come up with something for this: Vibration reduction (VR) with the SPORT mode. The VR SPORT mode gives a stable viewfinder image, but just before you take the shot, the VR is disengaged, so that the shot itself does not suffer any negative effects of VR at short shutter times. 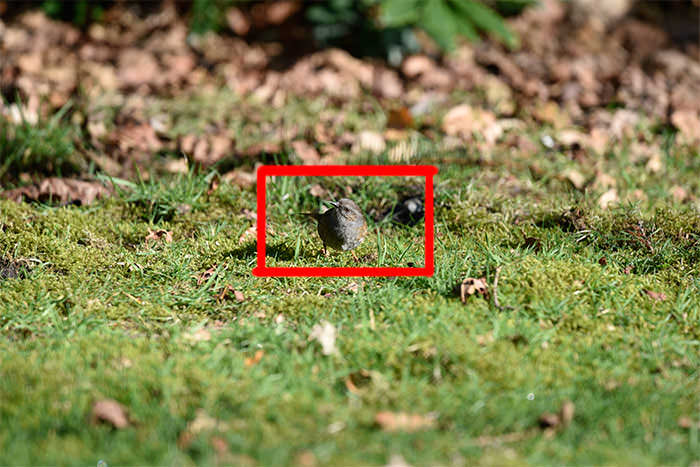 We can be very brief about distortion: there isn’t any! A nearly perfect score. Nano Crystal Coat reduces images and light flecks effectively, so that the brightness and the contrast of images increases. A Fresnel lens element can be more sensitive to light edges with a bright light source that is shining directly into the lens. 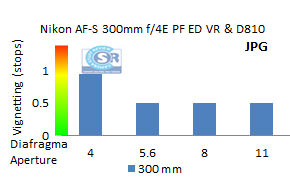 Vignetting is noticeably present at the largest aperture; we measure 1 stop vignetting for jpg files, but in practice it is already no longer visible after stopping down 1 stop. Chromatic aberration (red/green edges at sharp contrast transitions in the corners) is as good as absent. An element of ED glass (extra low dispersion) and the PD element limit chromatic aberration effectively to a minimum. 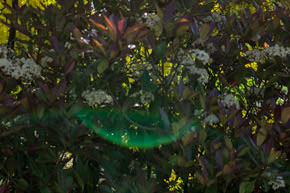 As compensation, Nikon has even included an extra light flecks correction for PF under the vignetting correction in its own RAW converter (CaptureNX). In our practice shots (move your mouse over the illustration here for a partial enlargement), we encountered little of this phenomenon. 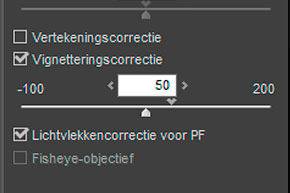 The sharpness is high starting at full aperture. It is still not as good as the Nikon 300 mm f/2.8, which we reviewed a few weeks ago, but it comes close. The quality in the corners barely gives anything up to that of the center.

Too long, didn’t read (TL/DR)? If you want to work for a long time with a light telephoto lens with high image quality, then you cannot beat the Nikon AF-S 300 mm f/4E PF ED VR.

Initially, the Nikon 300 mm f/4 PF ED VR looked like a successor to the familiar Nikon AF-S 300 mm f/4 lens, which is several hundred euros less expensive. Built-in image stabilization is nearly indispensible for a telephoto lens if you want to photograph in the dark. For that reason alone, these lenses cannot be compared, since the older 300 mm f/4 lens has no built-in image stabilization. The water- and grease-repellent fluorcoating and the electromagnetic aperture show that Nikon has invested in making this lens extra attractive. Even so, the compact dimensions and the low weight of the Nikon 300 mm f/4E PF ED telephoto lens, which also come close to those of the more expensive Nikon 300 mm f/2.8, which makes this lens unique.