Nikon is one of the few camera brands that builds an extensive series of lenses with which you can shift the focal surface and correct the perspective. That series was expanded in October 2016 on the wide-angle side with the PC NIKKOR 19mm F/4E ED. A lens with a list price just under 4,000 euros, which was under development for a long time and which is another step forward in the area of image quality. 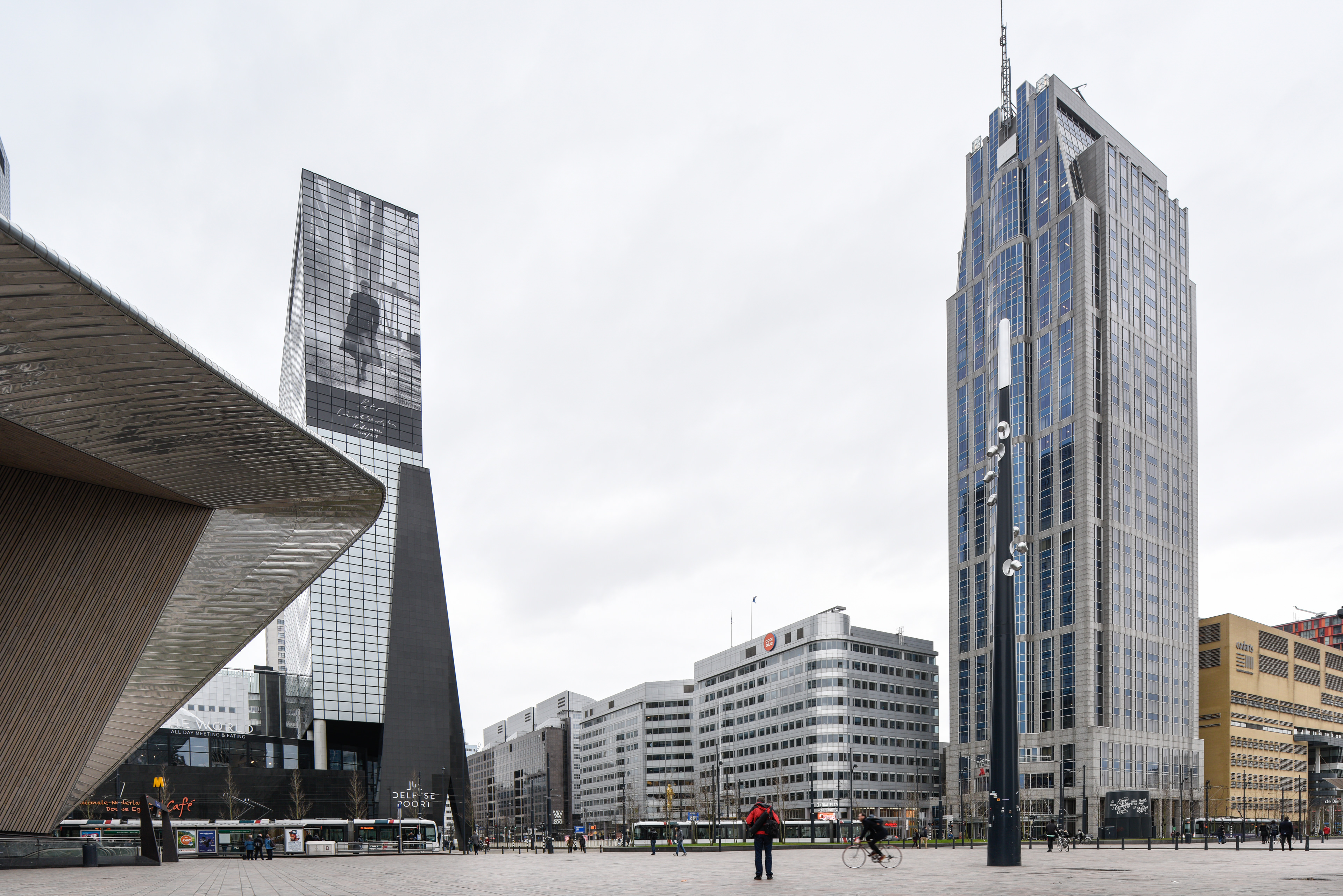 A shot made by hand with the PC NIKKOR 19mm f/4. Because of the upward adjustment, the buildings do not lean back, and they take on a monumental appearance.

There are other camera and lens manufacturers that make or have made a tilt or tilt-shift lens. But aside from Nikon there is only one brand that makes a complete series of tilt-shift lenses in a wide-angle, standard and telephoto version. The perspective correction (PC) series consisted for Nikon of a 24mm, 45mm and 85mm, and that exactly matched what Canon produced. That changed at the beginning of 2009 when Canon brought a 17mm TSE to market. It goes without saying that Nikon photographers hoped that Nikon would also quickly release a similar lens. It has taken some time, but that patience has now finally been rewarded. With the PC NIKKOR 19mm F/4E ED, Nikon also offers an ultra-wide angle lens with adjustment capabilities. The lens offers shift adjustments in order to be able to influence the perspective and tilt settings in order to be able to shift the focal surface. Shift is often used to photograph subjects like buildings without distortion. Tilt is usually used to distribute the focus better across a subject so that you get more of the subject in focus in frame. But it is often used in the opposite way for portraits to get only the eyes in focus or to make miniatures. 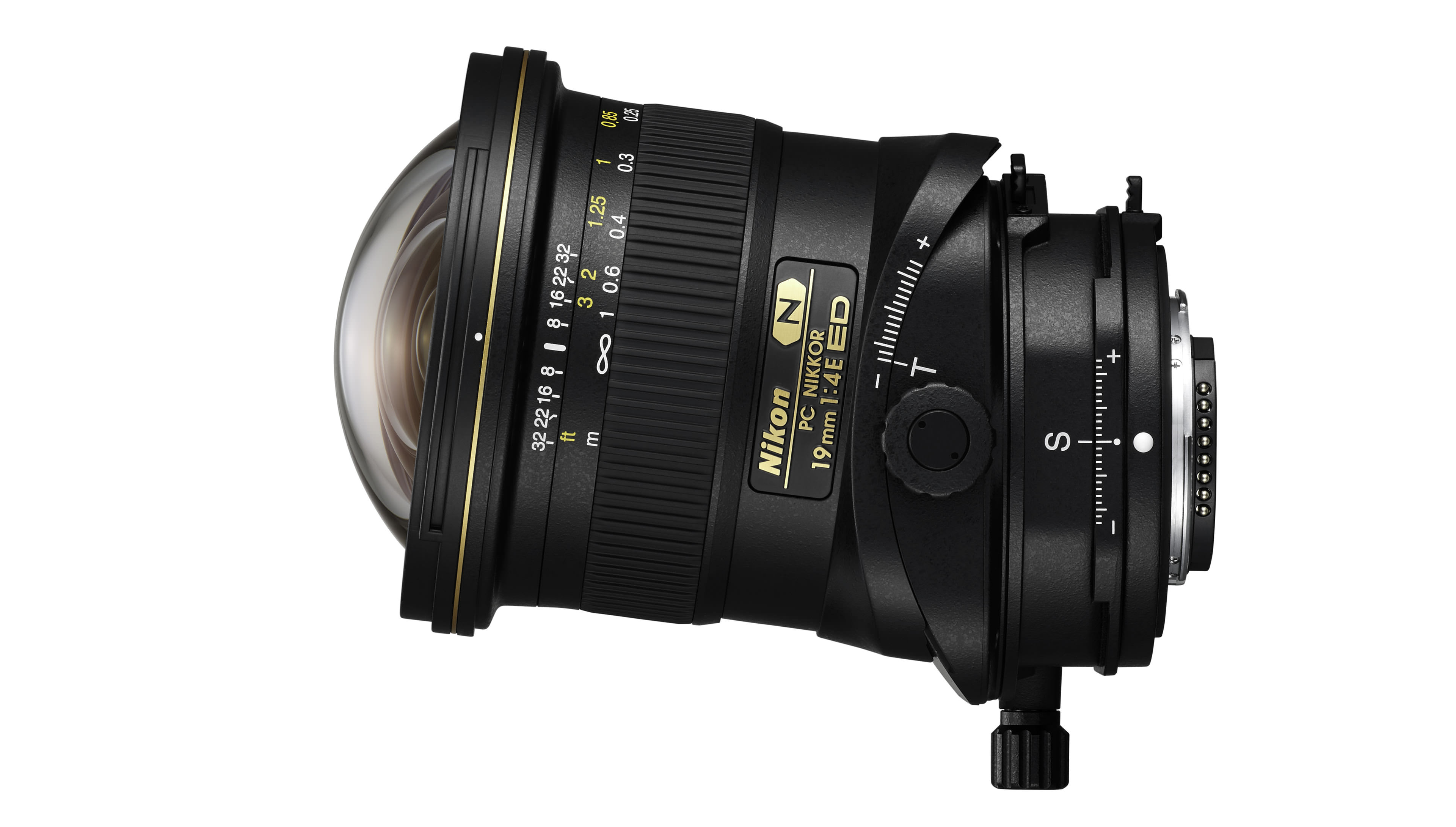 Those adjustment options are often used in architectural and studio photography. Architectural photographers use the adjustments to buildings nice and straight in frame. With a regular wide-angle, buildings appear to lean back when you point the camera upward to get the top of the building in frame. With a tilt-shift lens, you do not have to point the camera upward. You can hold the camera straight and only turn the lens upward. You thus get the top of the building in frame, and the building still remains straight. You can also use the same effect as a landscape photographer when photographing tall trees or mountains. In the studio, these kinds of lenses are used so that objects that are photographed at an angle keep their normal shape and to adjust the focal surface so that subjects are optimally sharp. Without that option, you would have to go to the smallest aperture much sooner or use focus stacking. In general, an 85mm is more likely to be used than a 19mm in the studio. But a wide-angle like this offers extra creative options. What also works very well with tilt-shift lenses is stitching photos together. When you take two pictures whereby the lens is maximally adjusted upward and downward or left and right, then those are often very easy to stitch together, for example with the ‘merge’ option in Photoshop. You can thus make panoramas with the 19mm with which you get more in frame than is possible with a regular 19mm. In principle, you can get the same picture by taking a picture with, for example, a 14mm and cropping off the top and bottom, but then you lose pixels. With the stitch method with the 19mm, you get more instead. That is ideal for photographers who like to make large prints.

The PC-Nikkor 19mm is big and heavy (nearly 900 grams) and that is quite normal for a lens like this one. In order to make adjustments possible, the image circle of the lens has to be a good deal bigger than it is on regular full-frame lenses. That is to say, the image that is projected by this lens is much larger than the dimensions of the sensor. You can therefore shift the sensor within this much larger picture. Such a large field plus the extra mechanical constructions to make the adjustments possible ensure somewhat larger dimensions and a hefty weight. The front lens is also much more convex than is normal on a regular lens with this focal length. The lens sticks out a considerable distance. That requires some extra caution. Walking around with this lens on the camera without the special lens cap is not a great idea. You can also not just simply screw on filters, although it is not entirely impossible with the use of special adapters. Lee, for example, makes adaptor rings for the Nikon 14-24mm and the Canon 17mm TSE for their filter system, and they will probably also make one for the 19mm NIKKOR. Adjustments with the Canon 17mm are hardly possible anymore with a adaptor ring like that, and the same will be true for the 19mm from Nikon. The PC NIKKOR 19mm F/4E ED is solidly built. Nikon’s Nano Crystal Coat limits shadows and light spots. This lens is equipped with Nikon’s fluorine coating, which actively repels water, dust and dirt without this coming at the cost of image quality.
The adjustment capabilities do make auto focus impossible. There are no motors in the lens. The only electronics on the lens are for the aperture. Adjusting and focusing is done manually. Everything works quite smoothly and completely free of play and is undoubtedly resistant to years of professional use. The shift adjustment is done with a wheel that has a separate axis. Adjustment can only be done by turning the wheel. Unintentionally making an adjustment because you accidentally press against the lens is thus impossible. The lens has no lens hood. For a wide-angle, tilt-shift lens, that is not of much use anyway. There is a special, deep lens cap included that protects the convex front lens during transport and that is secured well to the lens. It is a lens cap to be careful with, because a new one will probably not be inexpensive and will not be in stock at the photo shop around the corner. 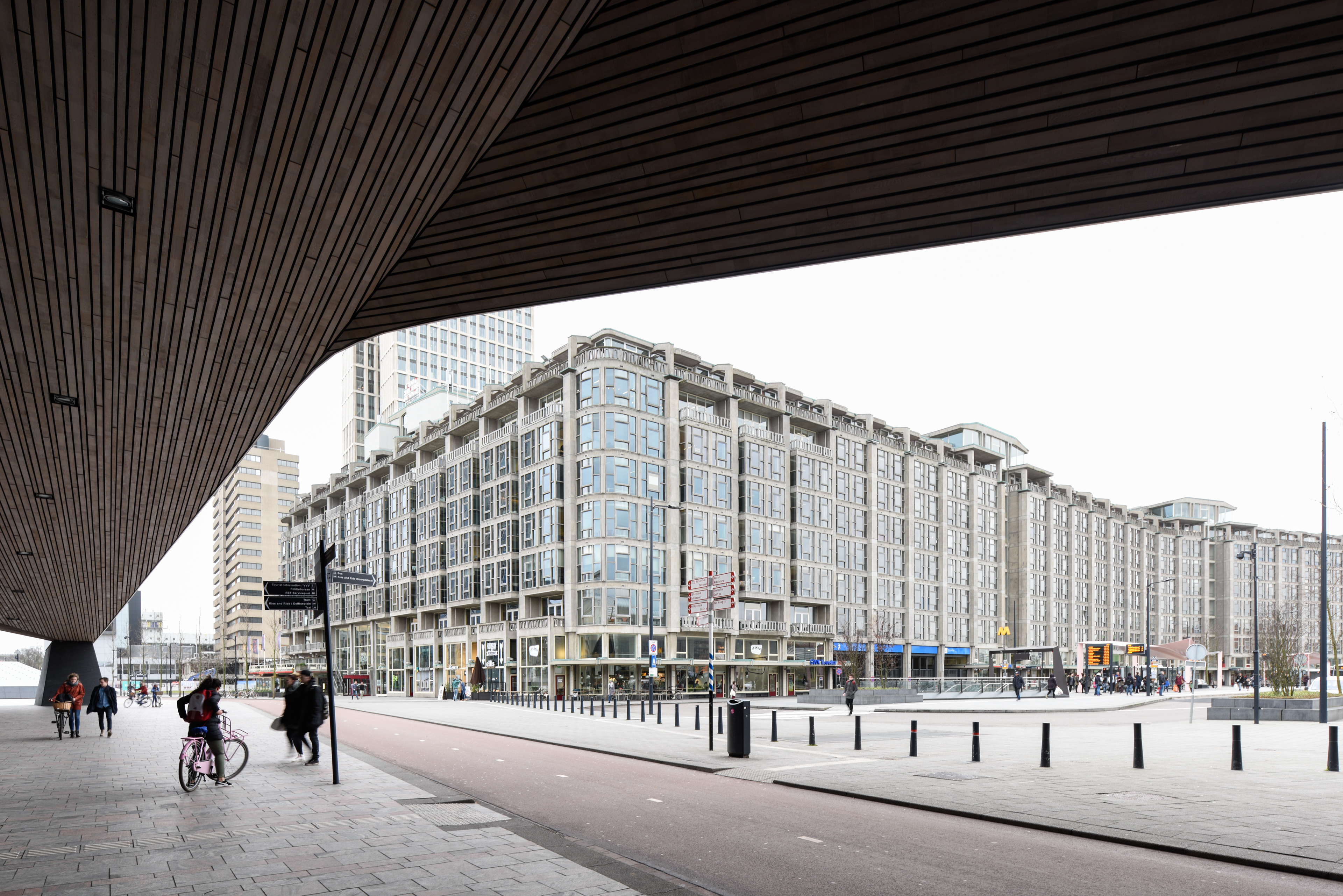 The field of view of 19 mm means that photographers can show the actual proportions of a subject or can capture more of a building and less of the foreground. A shot taken by hand with the PC NIKKOR 19mm f/4, to which an adjustment is applied. The composition can thus be changed without having to point the camera upwards or downwards. Buildings therefore remain standing straight, so that a city photo like this works better. You expect—with the high contrasts of buildings against such a light sky—to see some chromatic aberration, but that is completely absent.

The PC NIKKOR 19mm F/4E ED delivers very high image quality. Architectural photographers actually expect nothing more or less than for a lens like this to be free of distortion. If straight lines in the photo start curving and have to be corrected in post-editing, then a lens like this isn’t much use. The PC NIKKOR 19mm F/4E ED easily meets the highest expectations. The distortion is practically 0%, even at maximal adjustment. Vignetting is also something that often occurs with super-wide angels. But not with this PC NIKKOR 19mm. Chromatic aberration is extraordinarily well suppressed, and that is quite a feat for a lens with such a wide field of view and image circle. The 19mm NIKKOR also has the newest coatings. You notice that when you have a light source in frame. Despite the big, convex front lens and the large number of lens elements, it is practically impossible to get veiling glare or flare.

The PC NIKKOR 19mm F/4E ED is a specialized lens. But once you what you can do with it, then you can take unique photos with it that are not possible with other lenses without at least a good deal of Photoshopping. Those who can play with this lens will discover a great many creative possibilities. If you use the PC NIKKOR 19mm F/4E ED without adjustment, then the image quality is extraordinarily high. That is logical. You are then only using the center of the image, even on a full-frame camera. What is great is that the performance remains high when there is an adjustment. The distortion is practically 0, and the same applies for the vignetting. Even without the adjustment capabilities, it is already a very interesting lens because of the optical performance.