Chromakey recordings are business as usual in the TV and film industry. This is where a speaker, reporter or weatherperson stands in front of a (usually light green or blue) colored background, on which another image will later be placed. It is rather simple to make Chromakey recordings yourself. That is very handy if you do not have the cash for a studio and you want to make recordings for YouTube or your own website. You film yourself in front of an evenly lit, light green background and replace that background in a video editing program with whatever you like. The ease with which you make successful Chromakey recordings (read: the amount of time it takes you) depends strongly on the original recording. If the Chromakey background is not big enough, you will have to do extra editing, since otherwise, your living room will still be in the shot. This is true in particular if you use multiple camera viewpoints or a moving camera. If the background has creases, wrinkles or is simply not evenly lit, then the entire background will not be replaced, and you see those creases and spots in your new background.

Is there a compromise between small and compact and a good final result? I checked that out with three different Chromakey solutions. In order to compare the backgrounds with each other, I used the same lighting kit of 4 LedGo LG-LE60 LED striplights in all cases for even lighting of the background. I also used an LED lamp (LedGo LG-600) for highlighting the subject and the foreground. Such a simple setup can be used in any living room.

The least expensive and easiest to transport solution is a folding Chromakey screen. Most of you are familiar with the gold or silver round reflection screens that after a bit of struggle can fold up to a very handy size. Such screens can also be purchased in green. Because I wanted to stand or sit in front of it, I chose the largest version possible: 1.5 by 2 meters. When I filmed myself sitting or standing from the front, then the screen was large enough. But when using multiple camera viewpoints—or if I wanted to have a little bit of space to move—then a piece of the living room also entered frame. There were also still creases and wrinkles in the screen. It took me a great deal of time in post-editing to resolve that.
I can imagine that I might use this screen on location—precisely because it is so easy to transport and unfold—but for the time being I have another preference..

Creases and waves in the background are not immediately removed in Chromakey. The smoother the background, the less post-editing needed..

If you have the space in your house to hang multiple rolls on the wall or from the ceiling, then paper, plastic and fabric rolls are for sale in multiple lengths. You can use these as the background for your Chromakey recordings. There are holders for sale with which you can hang multiple rolls at once, so that you can also quickly choose another color. The only thing that you have to do before a video recording is to pull down the roll. This solution is successfully used in many photo studios, in part because you can use different colored backgrounds this way. If you stand sufficiently far from the screen, then by limiting the focal depth you can ensure that you won’t be bothered by any creases in the screen. But I don’t have that much space in my house. There are also frameworks for sale that you can set up easily for hanging the rolls. It takes a few minutes’ work, and you can easily fold up and store the framework. In order to have a bit of room to move when making recordings, I chose a 4-meter roll. Just one 4-meter roll is a challenge to store somewhere. I also notice that when using a straight back wall, even 4 meters is not long enough when you film more from the side. Then the living room unexpectedly appears in frame. The use of the roll on two stands in outside was not such a good idea, because the paper roll works like a sail, easily catching the wind, which knocked over the framework. And every time I pull out the roll, there are extra creases and folds in the paper. I do not have the room to stand far enough from the screen that the creases in the background disappear in the bokeh. Another factor is that one of the video cameras that I use has a 1-inch sensor. That has a bigger focal depth than cameras with a full-frame sensor. You can remove the creases by always making the roll shorter, but some folds remain visible. Then you have to throw away an unnecessarily large amount of paper, I think, to get rid of the creases. It’s possible that a more expensive cotton or vinyl background is less susceptible to creases. The hassle of moving a 4-meter roll through the house is something I increasingly dread. Relative to a smaller screen, a bigger set-up is absolutely nicer to work with, but storing that big roll and dragging it through the house is something I found to be quite a bother. 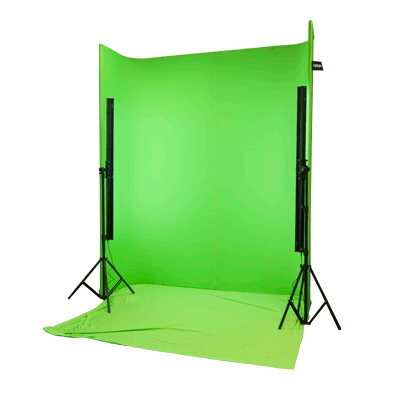 The LedGo LG GSU LE60 is completely self-standing green-screen background that is simple to store. The LedGo back wall is a metal frame that is 2 meters 70 wide, 2 meters 20 tall and 60 cm deep, and it is very simple to put together. Each end of a tube is numbered. If two tubes have an end with the same number, then you slide those together. Within a couple of minutes, you have a metal frame. Then you stretch a light green cover over the frame, analogous to pulling on pantyhose. Set-up and break-down of this set took less than 15 minutes. The only thing is that putting on the cover takes two people. The bright green background appeared to be simpler to remove in post-editing than the somewhat darker green color of the paper back wall and the folding green screen. But where I saved the most time in post-editing was the combination of versatility and the absence of folds and creases.

A big advantage for working on location, relative to the two other Chromakey solutions, is that you really do not have any problems with creases and folds, and that the screen does not blow over on location. The wind goes through it as if it were dust, so that it falls over less easily than my set-up with a paper roll. Because of the dimensions of the frame, putting on the green background is a 2-person job. If you pull the background good and tight when securing it, then you end up with a background that has no visible folds or creases. Thanks to the U-shape of the green screen, this was the solution with the biggest shooting angle, despite having a shorter length than the paper Chromakey roll. That makes two-shots and short riders possible. The beginner’s mistake that I made in my first video with this U-shaped background was to stand too close to the background, while I only used 1 light behind the camera. This caused visible “spill” (a green reflection on the skin). If you remove that the wrong way, then the new background shows through your skin. If you look closely at the shots from the side, you can see that happen. By using an extra light behind the camera, that can be resolved. My preference is to stand about a meter in front of the Chromakey screen, so that you benefit from the U-shape in shots from an angle, without creating spill. I also use the meter and a half long (washable) ground cloth, so that shots at an angle from above do not unexpectedly show something of the original background.

At the start of this test, I did not expect that I would choose such a set-up—one that you first had to invest 10 minutes in set-up for. But a big set-up with a smooth background cloth saved me more time in post-editing. Stored in the included “sports bag,” the green screen takes up so little space that I can easily store it in the attic.