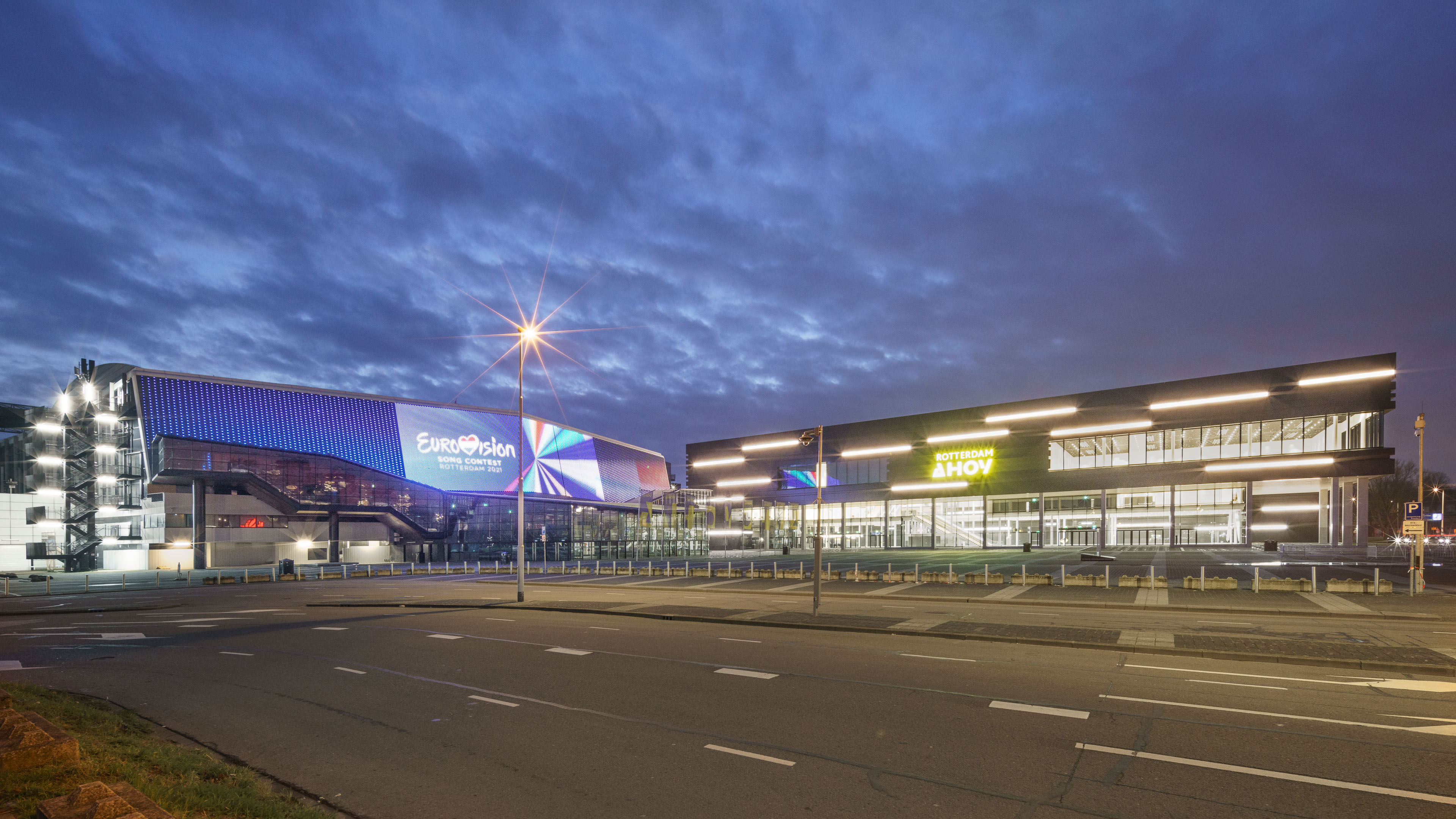 The Laowa 15mm F4.5 Zero-D Shift is primarily a unique lens for architectural and interior photographers. But it also offers special possibilities for (urban) landscapes.

Laowa is now a specialist in wide-angle lenses. For full-frame cameras alone, you can choose from a 9, 11, 12, 14 and 15mm wide angle from Laowa. The 9mm is the largest wide-angle available for full frame, the 12mm and 14mm are distortion-free, and the 15mm is also a macro. Add to that this Laowa 15mm F4.5 Zero-D Shift. It’s not quite Laowa’s first shift. The Laowa 15mm F4 Wide Angle 1:1 Macro Lens already had a shift option, but was not distortion-free. The Laowa 12mm F2.8 Zero-D can be equipped with a shift converter to make it a real 17mm shift. The Laowa 15mm F4.5 Zero-D Shift is therefore the first lens that has already been designed directly as a distortion-free shift lens, and it is at the same time the most wide-angle shift lens in the world. Because the image circle of a shift lens must be a lot larger than of a normal 15mm wide-angle, this is really quite an achievement. The image circle of the Laowa 15mm F4.5 Zero-D Shift is even so large that it can still be used with adjustment on, for example, the medium format Fujifilm GFX-100. 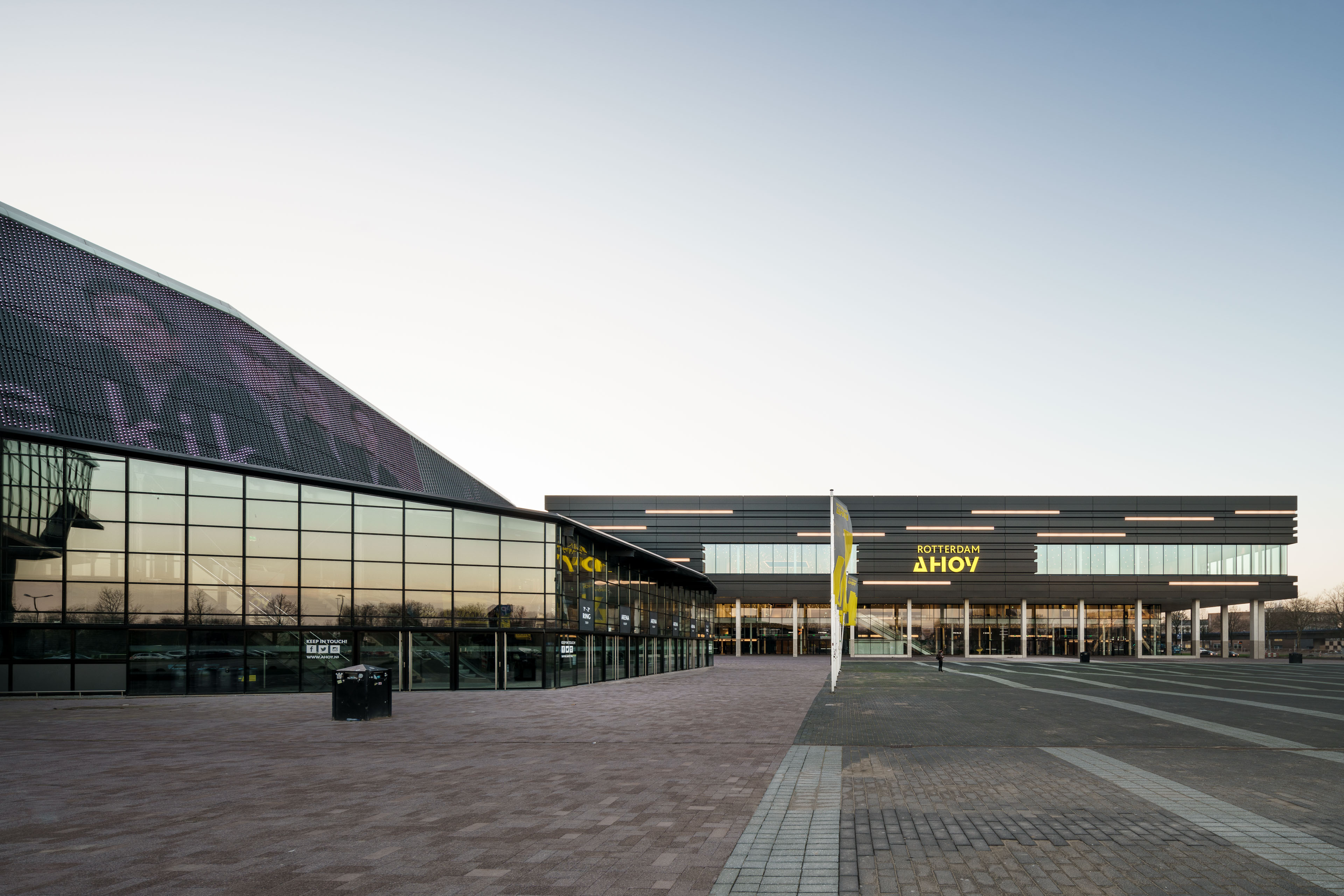 A shift lens is a specialized tool that offers unique possibilities. Thanks to the shift adjustment, you can shift the lens relative to the camera. This gives you much more control over the perspective in your shots, and you are freer in determining your composition. It offers many of the capabilities of the old-fashioned technical camera, but in a much smaller version. Shift lenses are frequently used for straightening tall buildings by adjusting the lens up. In the case of a non-adjustable lens, you would then have to aim the camera upwards, so that the buildings appear to fall back. This makes shift lenses very popular in architectural photography. Shift lenses are also widely used to take pictures with adjustments in two opposite directions (up and down or to the left and right) in order to be able to stitch them together later. This gives you an even broader effect and a larger number of pixels. Especially for this purpose, Laowa offers an adapter to put the lens on tripod and to move the camera. This ensures that the shots fit perfectly together. But the possibilities go much further. In interior photography, you can use it to prevent perspective distortion. For landscapes, you can use it to make mountains look bigger, the same way you straighten tall buildings. They also offer unique possibilities for landscape photographers. 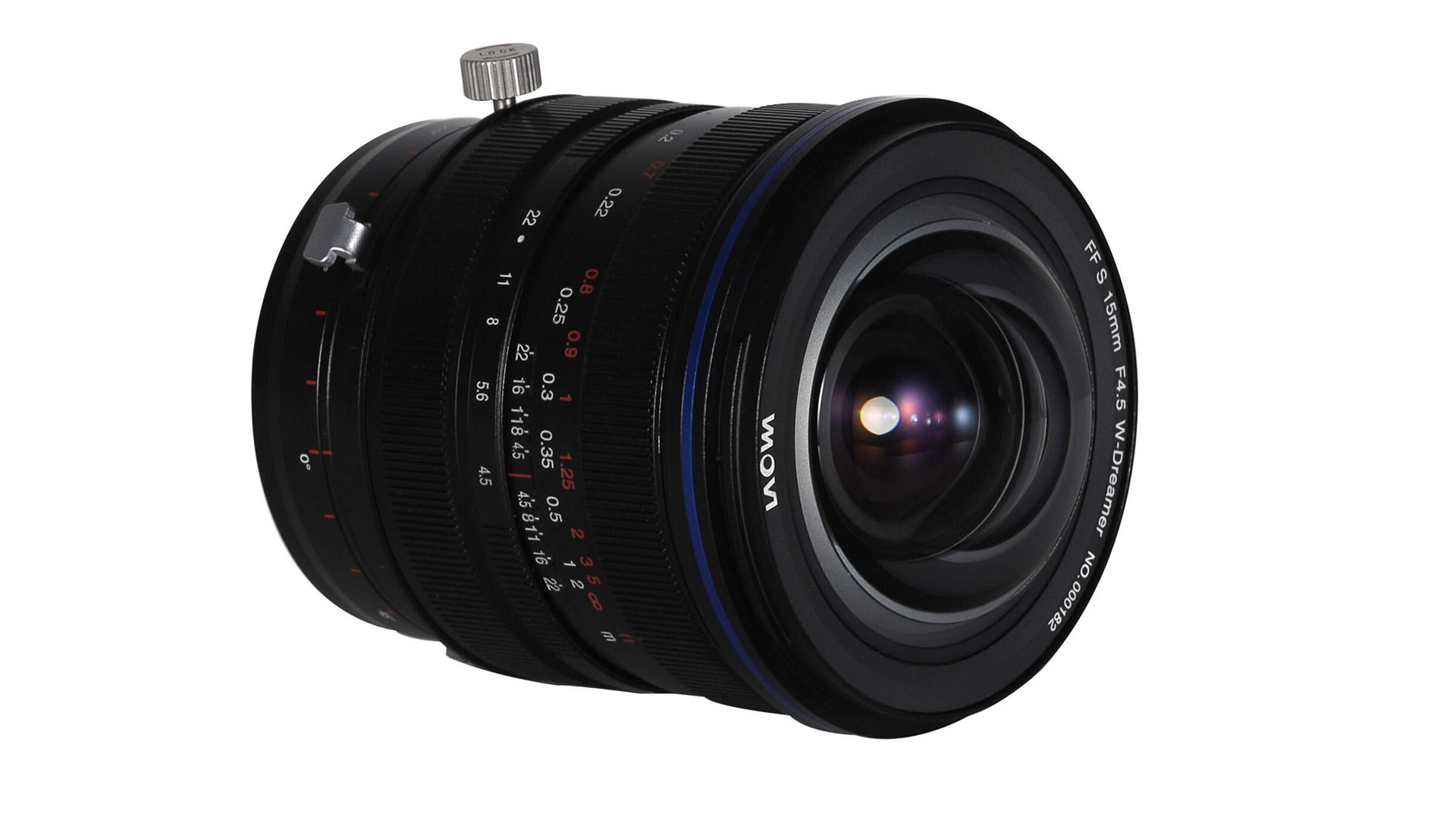 The Laowa 15mm F4.5 Zero-D Shift is a unique lens, but if we have to compare it with something, then the Canon TS-E 17mm F4L is the most logical candidate. The Canon has a 2mm longer focal length and is a third stop brighter. In addition to shift, the Canon also offers tilt. This allows the focal plane to be shifted. That’s not possible with the Laowa. Another difference is the adjustment method. The Canon has knobs to adjust tilt and shift. The Laowa has a ring around the lens for this. The Canon has an electronic aperture that also pairs with smart adapters on a number of cameras from other brands. With the Laowa, you will have to open and close the aperture yourself. As a result, it can be used on almost all possible cameras, except on SLR cameras with a medium-format sensor. 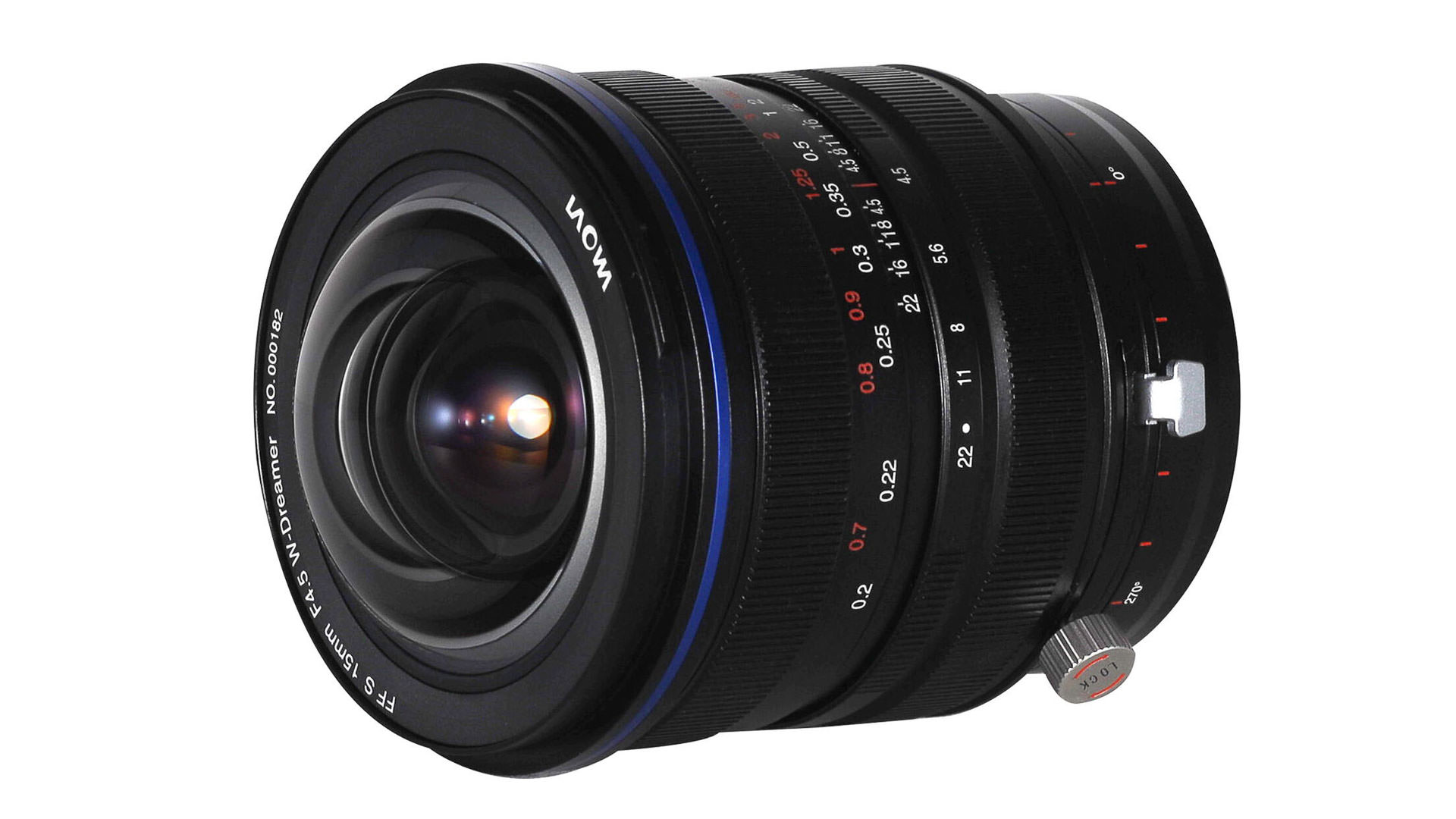 The Laowa 15mm F4.5 Zero-D Shift is built as we now expect from Laowa. Lots of metal. Nevertheless, the Laowa is still surprisingly light. The Canon TS-E 17mm F4 L weighs more than two ounces more. The optical design is quite complex, with 17 elements in 11 groups. The most eye-catching lens element is of course the convex front lens. This is not protected by a lens hood, because that would screen off part of the image during adjustments. The diaphragm has only 5 blades, but this lens will be used more often with maximum depth of field at f/11 than fully open for a beautiful bokeh. The advantage of these 5 straight blades is that you get sharp, ten-point stars very quickly if you have small light sources or the sun in the frame. 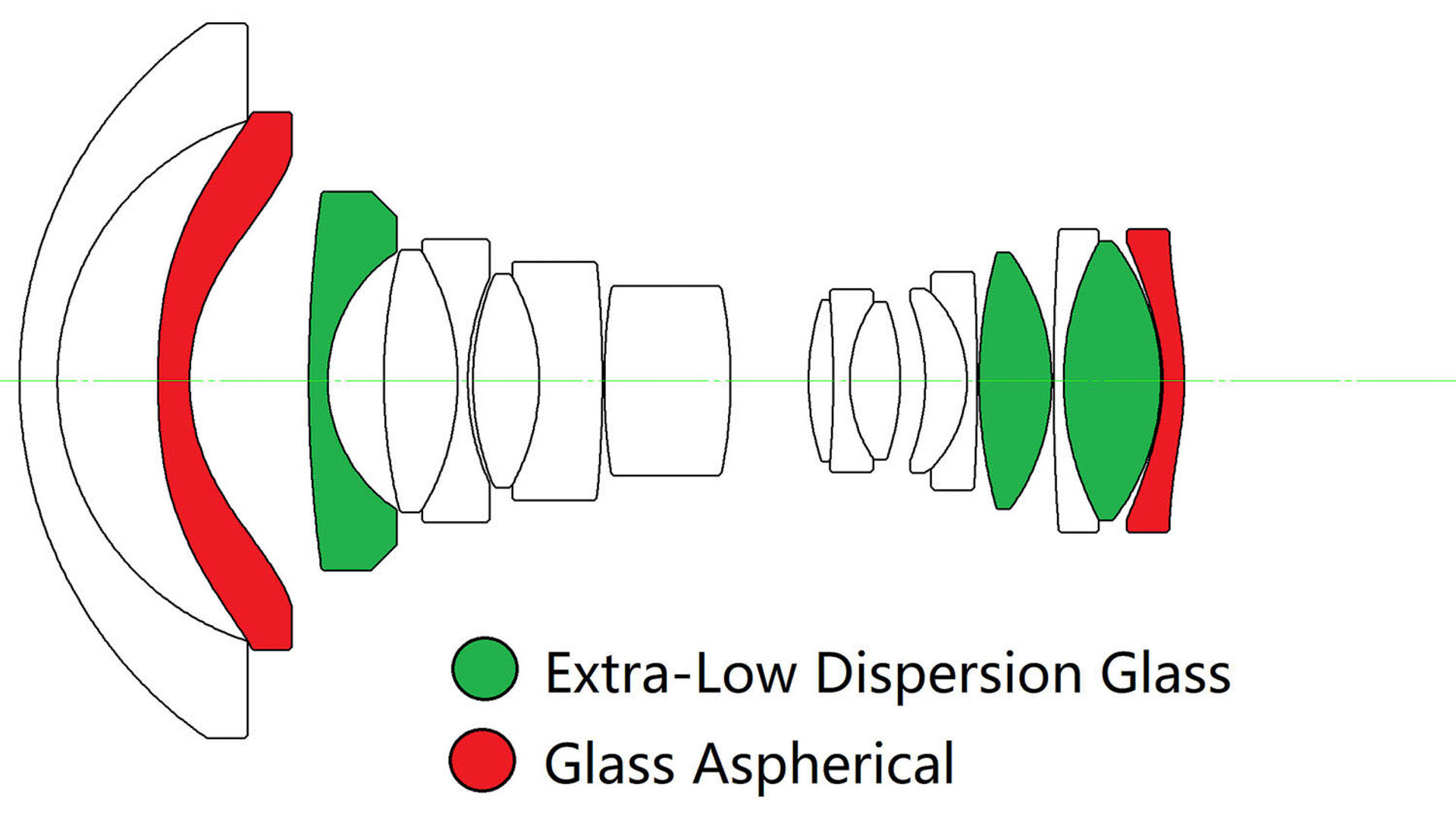 The lens has no additional gaskets to make it weather-resistant, but it also has no electronics to be protected. The reasonably wide focus ring is at the front and is purely mechanical. The same also applies to the much narrower aperture ring. It clicks in whole stops. Behind that is a ring that is almost as wide as the focus ring. By turning it, you can adjust the lens by up to 11mm. This ring has a rotary knob with which it can be fixed. Behind that, just in front of the mount, there is another adjustment option. By pressing an L-shaped metal button, you can rotate the entire lens relative to the camera. This allows you to perform the 11mm adjustment in all directions. Of course, you can’t use screw filters because of the convex front lens, but there is a filter holder for large, 100mm flat filters available.

The Laowa 15mm F4.5 Zero-D Shift can only be focused manually. That’s customary for these kinds of lenses. Usually, you spend a lot longer determining the correct composition with the help of the adjustment possibilities of this lens than you do on focusing. Autofocus is therefore something that is actually not really necessary with (tilt) shift lenses. The focus ring has a beautiful, old-fashioned smooth stroke that is sufficiently long. The shortest setting distance is 20 centimeters, and that is also more than sufficient for the type of work you do with these kinds of lenses. It is not enough for macro work, but Laowa happens to have another lens with exactly the same focal length, the 15mm F4 Wide Angle 1:1 Macro Lens. 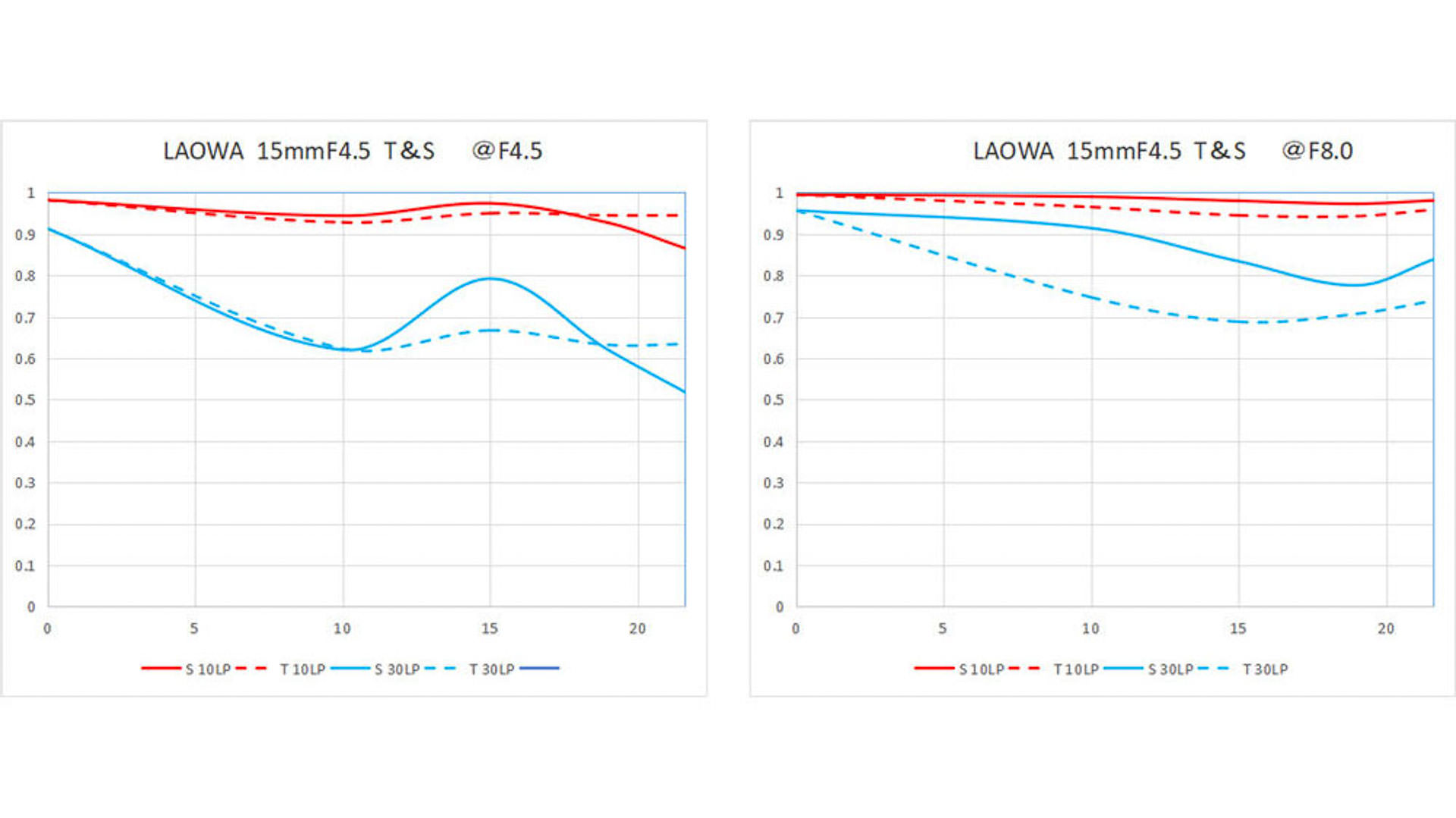 The image quality of the Laowa 15 mm F4.5 Zero-D Shift is good. The sharpness in the center is fine. The sharpness in the corners does not lag behind by much, and that is actually even more important. That’s a great performance for a lens with such a big field of view. This allows you to use the maximum adjustment without any problems. There are wide-angle lenses that are sharper in the center than this Laowa, but actually none that are more even than this Laowa 15mm F4.5 Zero-D Shift.

What you expect from a specialized architectural lens is that it has virtually no distortion. That is largely the case, until you get a big surprise. Then there is some barrel distortion in the corners. Normally, you would remove it with a slider in post-processing, but that is not possible with a shift lens once you have used an adjustment. The distortion is then no longer evenly distributed over the image. With ‘warp’ in Photoshop or a similar function in other software, it can still be resolved.

Due to the convex front lens, this lens is reasonably sensitive to reflections and flare, especially in interiors with lots of spotlights. A lens hood is not included and would not be very effective. What helps is to have a flimsy black card at hand to shield the lens from light sources just outside the image. Chromatic aberrations are also quite low. And that’s a good thing, because, like the distortion, they cannot be corrected properly once you have used a shift adjustment.

Although the Canon TS-E 17mm F4L is about twice as expensive as the Laowa, it is the most comparable lens.  The Canon can not only shift, but also tilt.  With the Canon, you can also move the focal plane. And the Canon 17mm can communicate with Canon cameras and other cameras if the lens is used with a smart adapter. Those are pretty good plus points. The Achilles heel of the Canon, however, is the sharpness in the corners. In the center, the Canon is sharper than the Laowa, but as soon as you use the maximum adjustment, the corners are quite out of focus. Even stopping down or focusing in the corners does little to prevent this. The Canon can be adjusted one millimeter more than the Laowa, but that only helps if there are no details in the corners. If you only adjust little, the Canon offers a little more sharpness. If you adjust a lot and often, we would go for the Laowa.

Ergonomically speaking, we do have a slight preference for the Canon. The wide ring of the Laowa that you have to turn to make a shift adjustment works quite well, just like the button that you have to push in to rotate the lens to determine the direction of the shift. However, it does rotate with the lens, so that you sometimes have to search for where it is located. It also clicks on certain positions, but if you are in between, the lens sometimes rotates in its entirety if you want to change the shift adjustment afterwards. Furthermore, we would like the click stops of the aperture ring to be a little clearer, so that the aperture can open to focus and close again to the desired value. These are small details that are easy to live with. The Canon is just a bit more refined, but that makes sense, given the higher price.

With a shift lens, you can easily keep buildings standing straight in urban landscapes. But you can also make great panoramas with it. Take two photos with adjustments in the opposite direction, and you can stitch them together almost without any problems because this gives you a larger field of view and more pixels. This method prevents the landscape from wandering in front of you. You do of course get more perspective distortion due to the extra-large field of view.

This method usually works without problems. But sometimes it can be better not to move the lens, but to move the camera. Technically, the image circle then remains in place, and you literally only shift the sensor in the image circle. This prevents lines from not aligning perfectly, especially in interiors. Laowa is the only manufacturer that supplies a bracket specifically for this purpose with which the lens can be mounted on the tripod.

The Laowa 15mm F4.5 Zero-D Shift is not only the shift lens with the largest field of view of all shift lenses, it is also very affordable.

The Laowa 15mm F4.5 Zero-D Shift is a fairly specialized lens. If you think you never need the adjustment options, then the Laowa 14mm F4 FF Zero-D is not only much smaller and cheaper, but also a fraction sharper and therefore a better choice. But with this lens, you can do so much more than with a regular wide angle, that you should not actually compare them with each other. Once you are used to manipulating composition and perspective with a shift lens, it is sometimes difficult to go back to a non-adjustable lens. The good image quality and the reasonable price make this shift lens extra attractive.