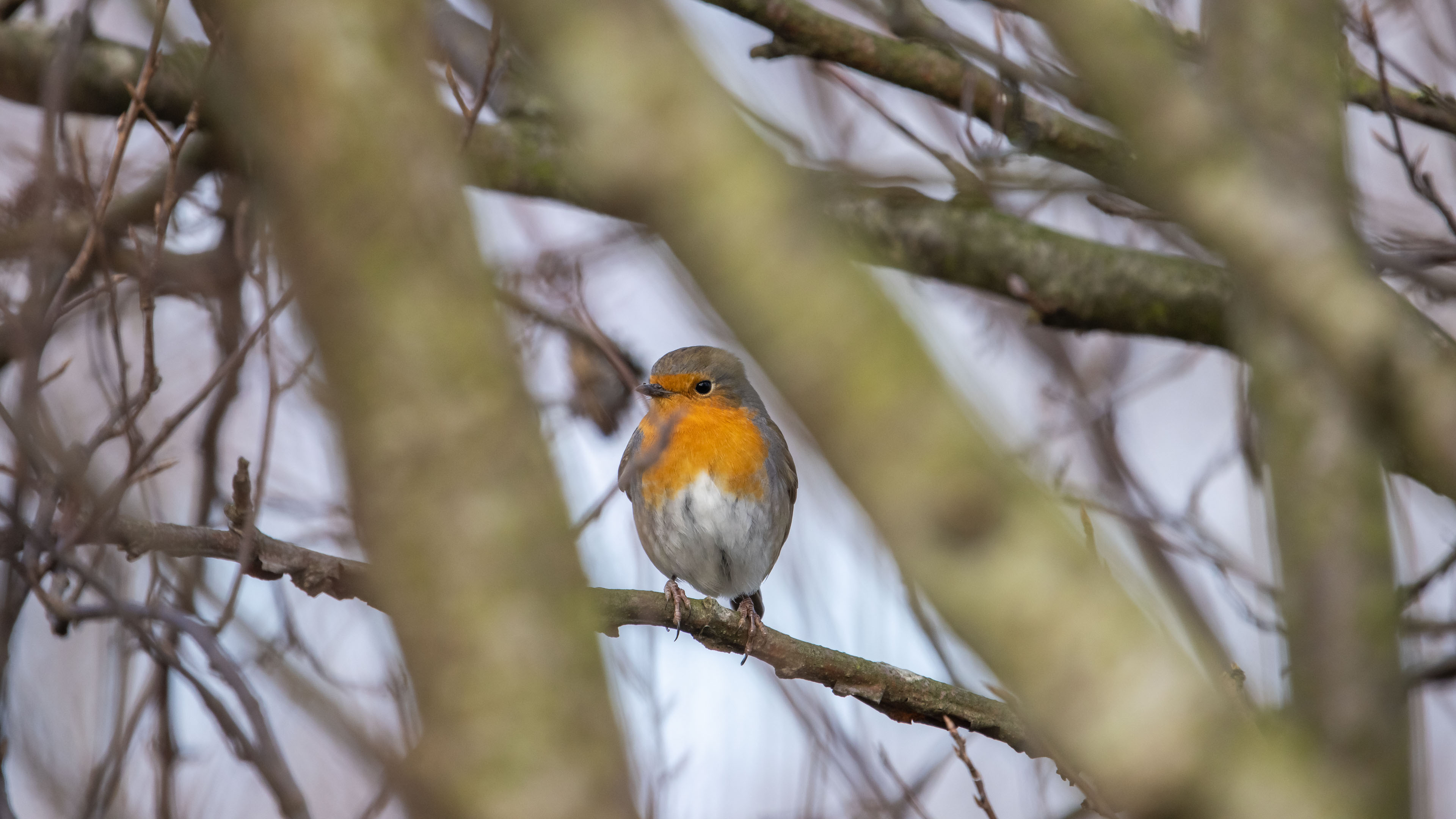 The Canon RF 600mm F11 IS STM is a telephoto lens for the Canon R system with a number of special features. It’s not particularly bright, with f/11, and you can’t even close the aperture any further. But thanks to this modest brightness, it is extremely light for a super-telephoto. It is also very compact to store. 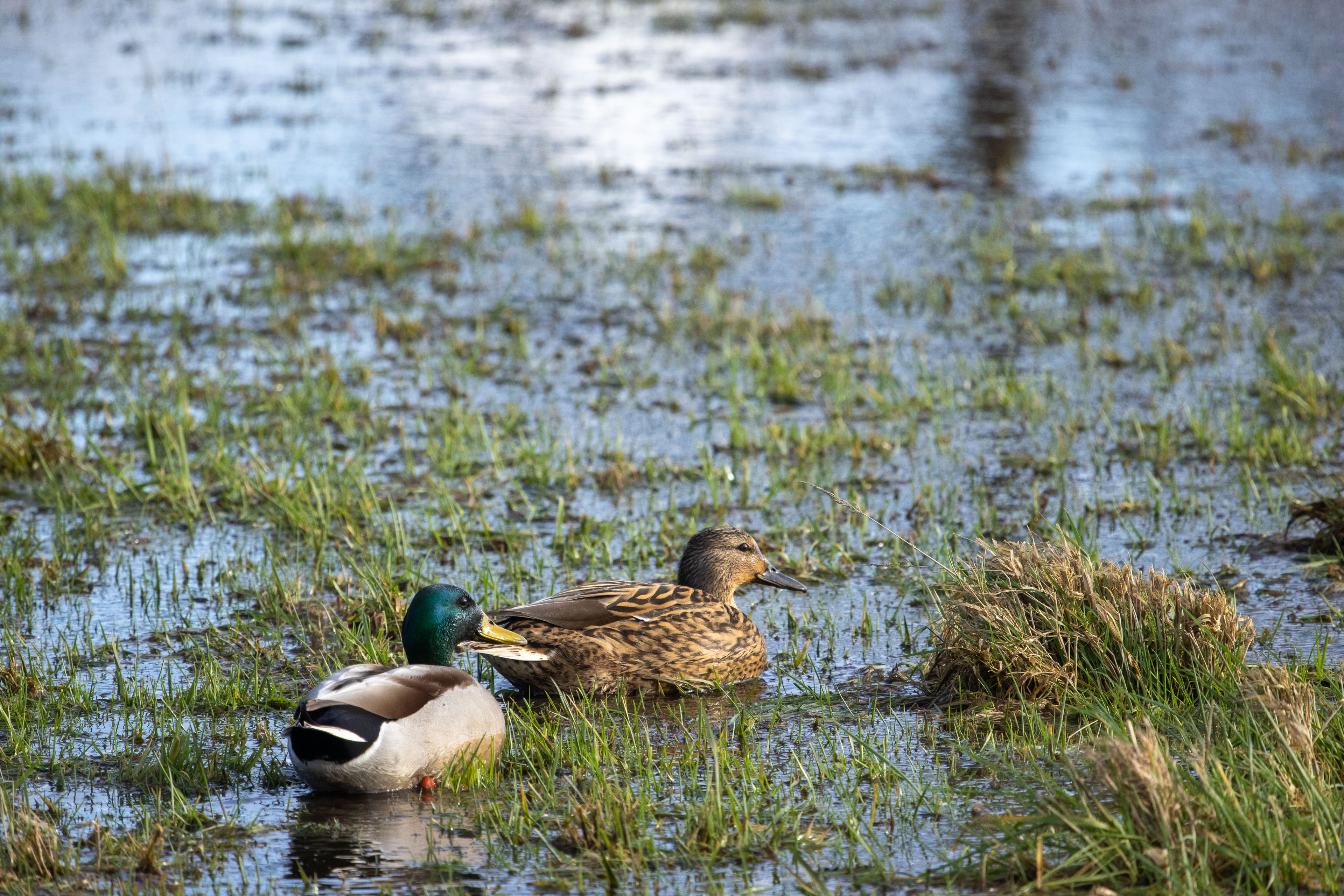 The Canon RF 600 mm F11 IS STM is a super-telephoto lens according to a whole new concept. In recent years, with the development of full-frame lenses, the emphasis seemed to be increasingly on high brightness. You do pay a price for that, and it is usually high. This also means that the weight and dimensions of modern lenses are usually hefty. The Canon RF 600mm F11 IS STM goes directly against this trend. The lens is not very bright at f/11. You can even say that it is a very slow lens. With many SLR cameras, the autofocus does not even work at f/11. But the RF 600mm F11 IS STM is not made for SLR cameras but for the new, mirrorless RF system. And the autofocus of the R cameras has no problem with f/11. 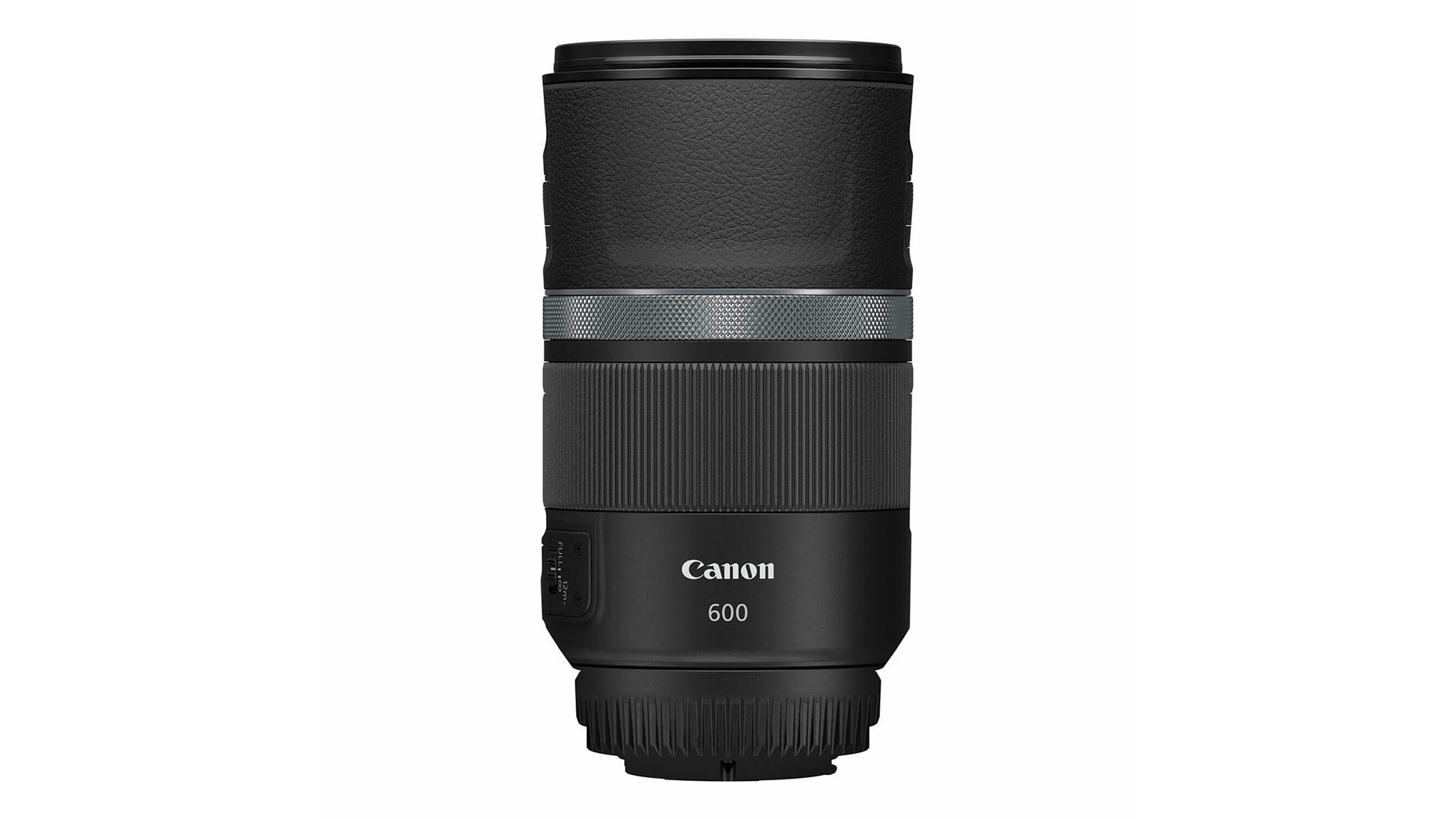 The advantage of this low brightness is that you need less glass. And that provides a considerably lower weight than is normal for an 600mm. Extra weight is saved by using a diffractive element, as we know from Canon DO lenses. Canon has also made this lens retractable. This allows you to make it nice and small when you want to store it. And that’s also nice if you want to take a lens like this with you in your bag or backpack. The front of the lenses has the structure of leather. As a result, the lenses look somewhat old-fashioned, and that is not a coincidence. The lenses are inspired by older telephoto lenses that consisted of a separate part with the optics of a separate bellows for focusing. 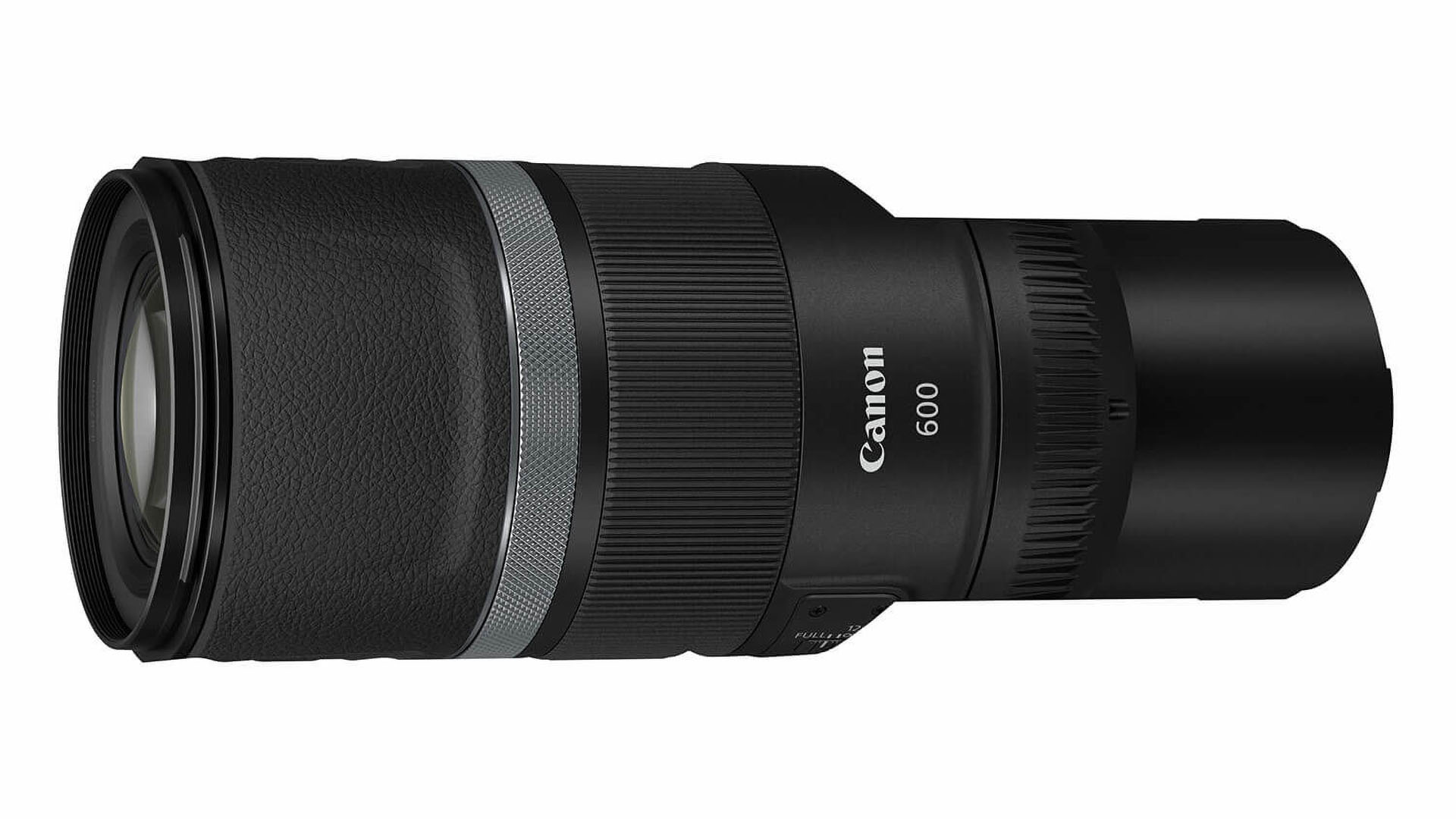 The uniqueness of the Canon RF 600mm F11 IS STM is evident when we look for a lens to compare the Canon with. Perhaps the Nikon AF-S Nikkor 500mm F5.6 E PF ED VR comes closest. This is a 500mm which, like the Canon, has a fresnel lens. As a result, the Nikon is significantly smaller and lighter than other, comparable telephotos. The Nikon is two stops brighter than the Canon. This allows you to better isolate your subject from the background and at the same time reduce your sensitivity by two stops. However, at 1460 grams, the Nikon is more than half a kilo heavier than the Canon and costs five times as much. The Canon has a 100mm longer focal length and is – retracted – also half as long as the Nikon and is therefore much easier to carry. 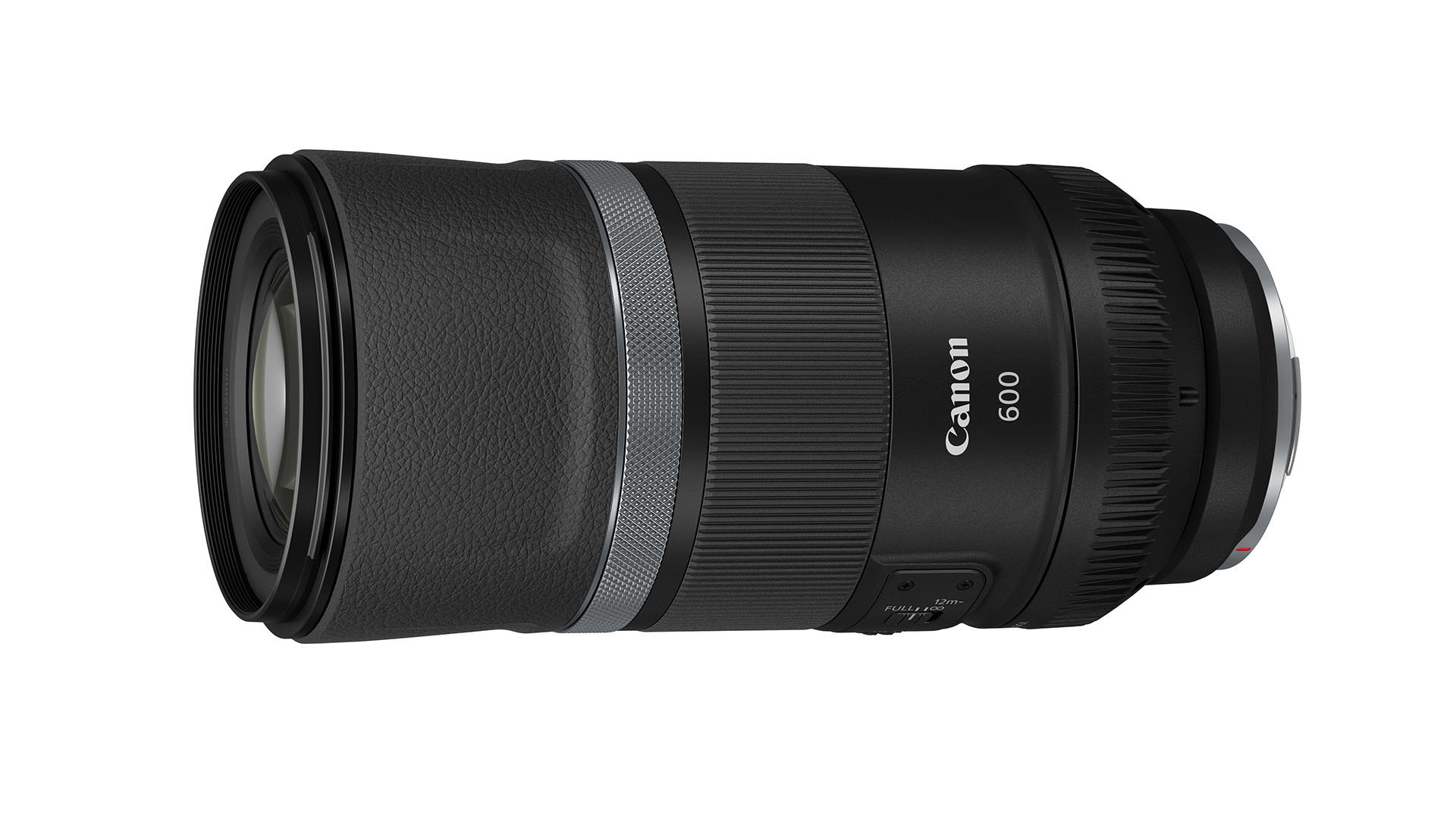 The Canon RF 600mm F11 IS STM is a very compact 600mm for taking with you. When retracted, the diameter is 93mm and the length, 199.5mm. So it’s barely 20 centimeters. Before use, the lens has to be extended, and then it will be 269.5mm long. That is also very modest. The weight is a very pleasant 930 grams. For a super telephoto, that’s flyweight class. The lens design consists of 10 elements in 7 groups. One of those elements is, as mentioned, a diffractive element. This is a type of fresnel lens. The advantage of this is that such an element can refract the light in almost the same way as a glass element but can be much thinner. Especially in telephoto lenses, which often contain large glass elements, this is a big advantage in terms of weight. 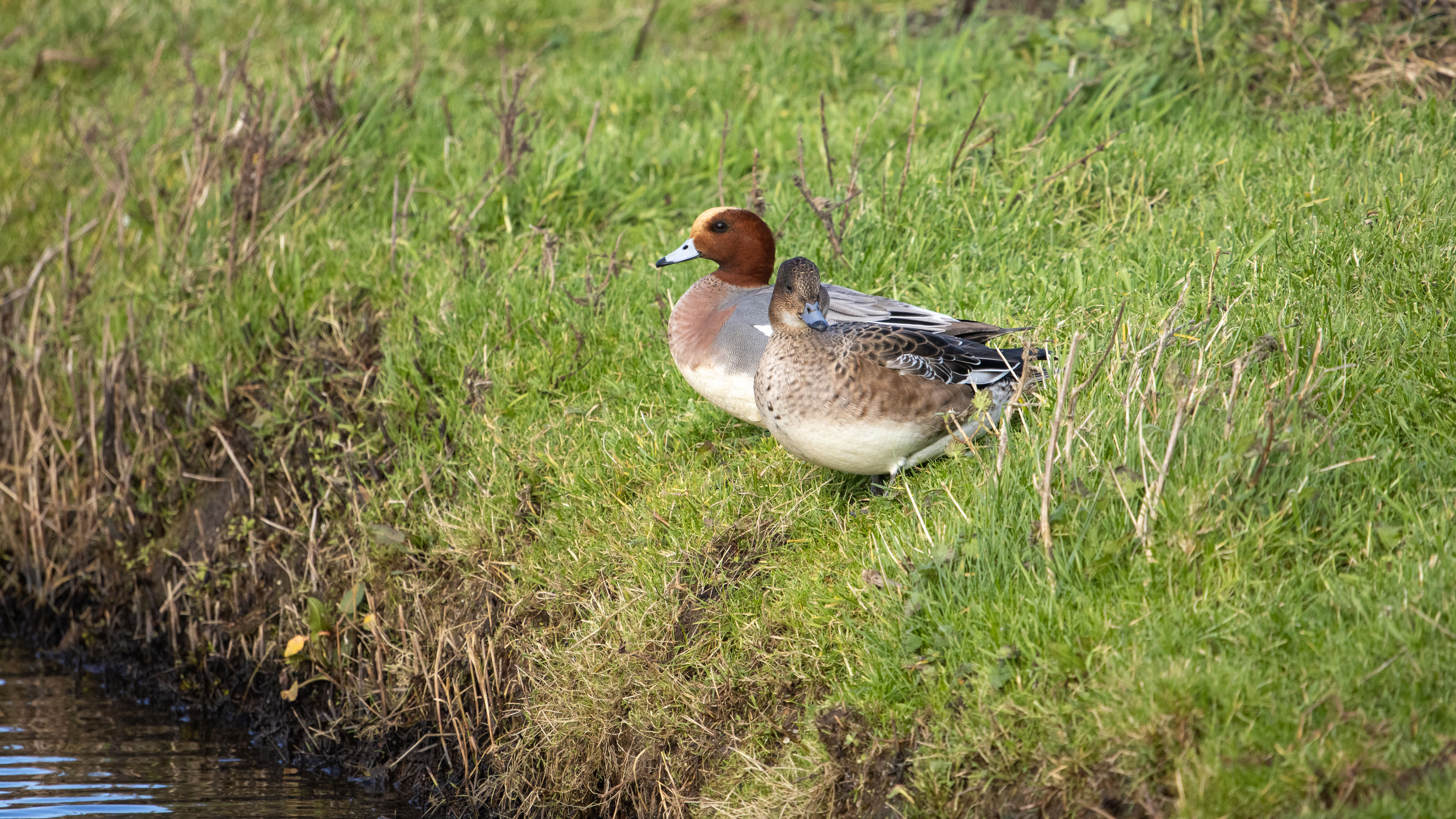 The lens has no tripod collar, but a thread on which a quick coupling plate can be mounted. The lack of a real, rotating tripod collar results in a lower weight and more compact dimensions, but is more difficult if you want to take standing shots from a tripod. A small L-bracket could offer a solution for this. What the Canon RF 600 mm F11 IS STM does have are switches for reducing the focus range and switching between autofocus and manual focus. Another thing missing on the Canon RF 600mm F11 IS STM are gaskets to make the lens weather-resistant. As a result, photographers who want to photograph under all circumstances will have to take additional measures to keep the lens dry.

The RF 600mm F11 IS STM of course works perfectly with the Dual Pixel CMOS autofocus of the R cameras. The lens has an STM focus motor. These are extremely quiet and accurate. In practice, we had no trouble focusing on topics quickly with the Canon and following moving topics was also no problem. The shortest setting distance of the lens is 4.5 meters. This results in a magnification of 0.14x. So this is more of a lens for distant subjects than for small objects close by. When using teleconverters, the shortest setting distance remains the same, but the field of view is reduced. This increases the magnification. That can be a solution for photographing small subjects. Of course, the brightness decreases when using teleconverters. See below. If you have a very small subject in a busy environment, it is useful that you can easily switch to manual focus. The broad focus ring works well and even at F11 the difference between sharp and blurred can be clearly seen with a 600mm. 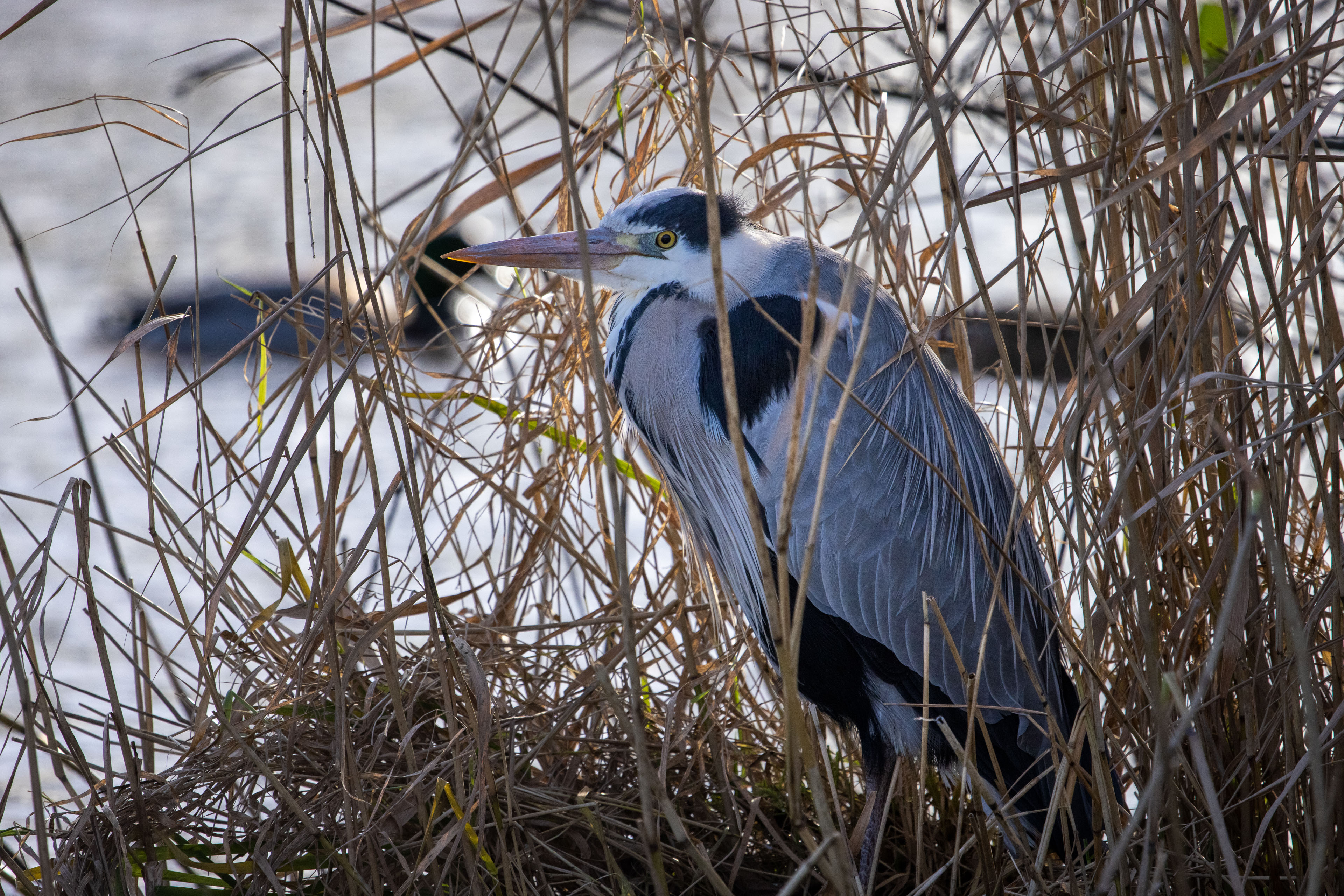 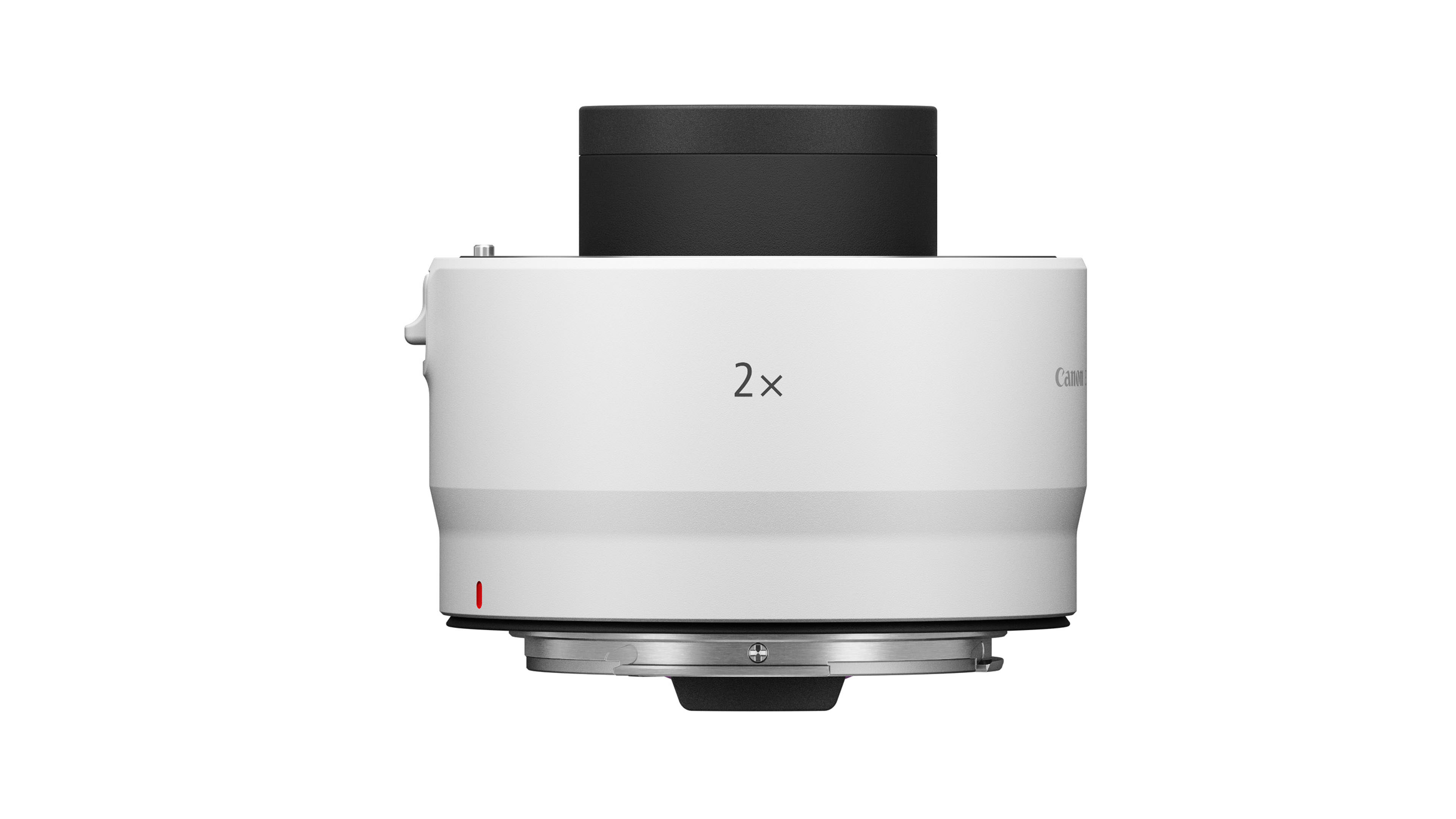 The Canon RF 600mm F11 IS STM has image stabilization in the lens. It is good for about four stops in practice. This ensures that you can easily work by hand with this lens, especially if you increase the ISO values a little. What you will have to pay more attention to when working with super telephotos is subject motion blur. This is also enlarged by the lens. Although we were able to take sharp shots up to about 1/30th second with this lens by hand, you will try to stay above 1/250th second or even far above in practice for photographing flying birds, for example.

The Canon RF 600mm F11 IS STM is quite sharp, especially in the center. You can see a slight gradient towards the corners, but it is not much. Because the lens has only one aperture, there is nothing else to do about this. Fortunately, the image quality on the demanding sensor of the Canon EOS R5 is more than sufficient. The sharpness is not as striking as of the Canon L lenses, but you should not compare the RF 600mm F11 IS STM with those. They are so much bigger, heavier and more expensive that they are really in a different class. Those considering one of those L lenses may not even read this test. 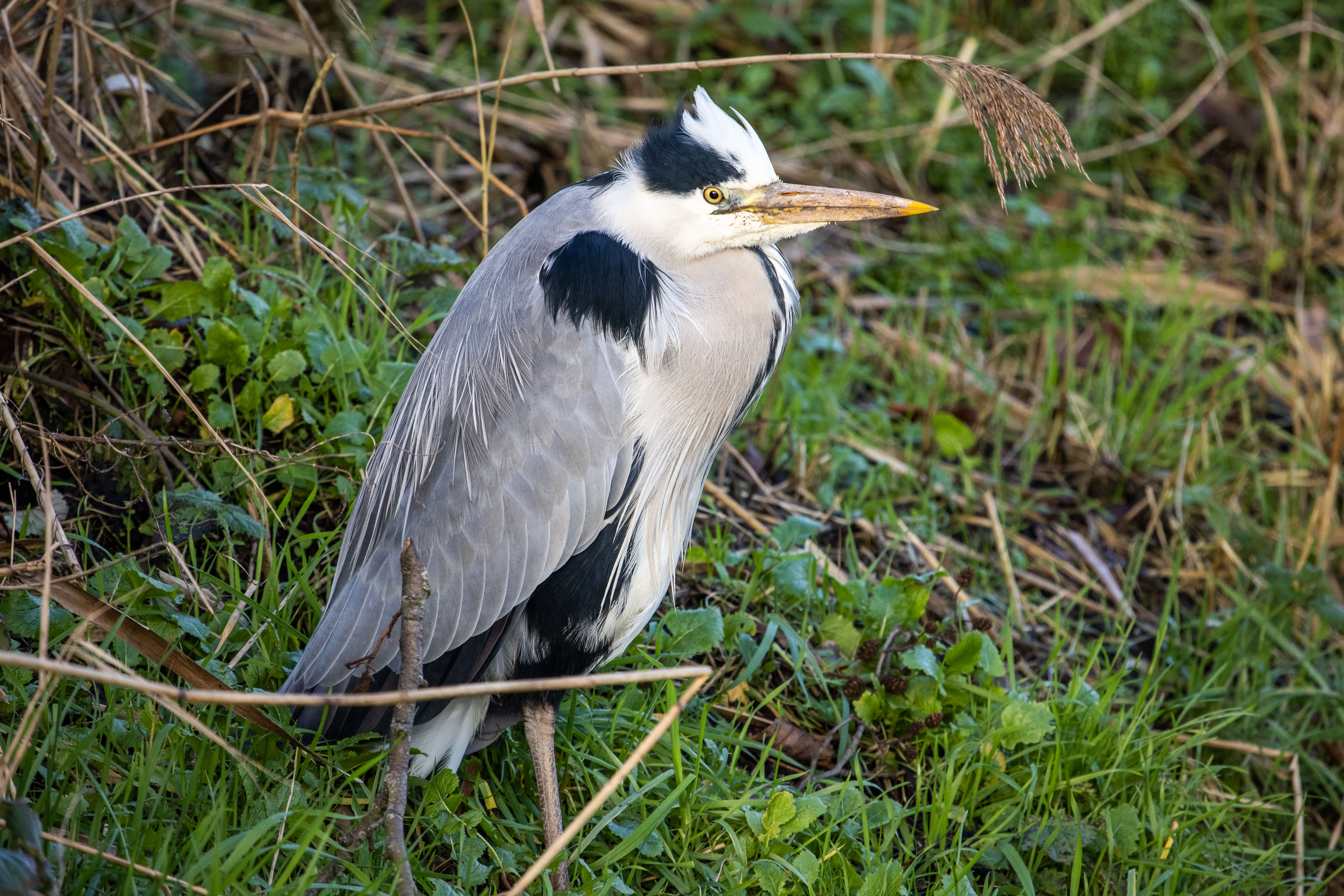 The 600 mm also has little trouble with vignetting. There is a tiny bit to see, but in practice it is not important. In the corners, you can sometimes still see some chromatic aberration, especially if you photograph dark birds against a clear sky. Once your subject is in the center of your image, you no longer have any problems with it. LoCas (longitudinal chromatic aberrations) in which the foreground gets a different color splash than the background, play no role in this lens. That of course also has to do with the aperture of F11. In general, we see LoCas mainly occur with bright lenses.

What can sometimes bother you with the Canon RF 600mm F11 IS STM is a reduction in contrast when you photograph in backlight. That is a well-known phenomenon with lenses with a fresnel element. Especially in the viewfinder, the shots look a little soft and bleached. Fortunately, the shots improve enormously from increasing the contrast in post-processing and still leave you with a good photo. The loss of contrast when taking the shot is not accompanied by glare or ghosts that could make the shot unusable. 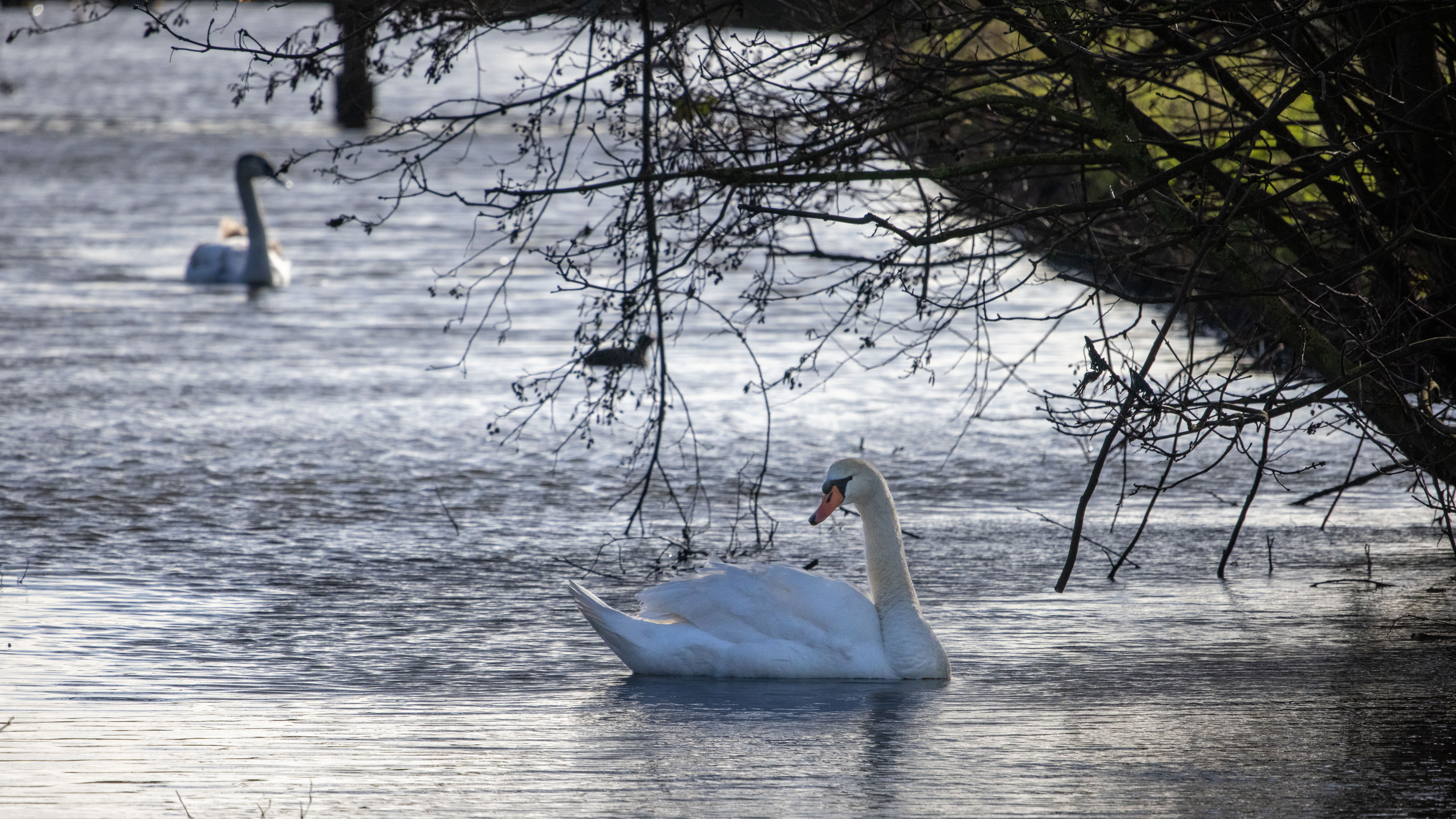 If we look at the image quality as a whole, then we can only see that the Canon performs well, certainly compared to the low price. This lens (and its big brother, the Canon RF 800mm F11 IS STM) also bring super-telephoto within the reach of photographers with a small budget.

If you are considering purchasing the Canon RF 600mm F11 IS STM, you may also think about the Canon RF 800mm F11 IS STM. The image quality does not differ much. The choice depends mainly on the dimensions and type of subjects you want to photograph. The 600mm is so compact that you can easily take it with you in a smaller photo backpack or photo bag. The 800mm really takes up a bit more space. On the other hand, the range of the 800 mm is really much larger than that of the 600 mm. The 600mm is more of an all-round super telephoto for larger animals that you can also use perfectly for landscape shots. Bird photographers who regularly get subjects of less than 10 centimeters in size for the lens will really have more with the 800mm.

With the arrival of the affordable Canon RF 600mm F11 IS STM you no longer have to dream of a super-telephoto.

The Canon RF 600mm F11 IS STM is a particularly affordable super-telephoto that you can also easily take with you. Retracted it is nice and small, it is light and you can also take great photos with it. Do not be deterred by the relatively low brightness: Canon’s latest mirrorless cameras focus at F11 without any problems. The Canon RF 600mm F11 IS STM brings super-telephoto within the reach of a very large group of photographers who previously could only dream of such a long telephoto.