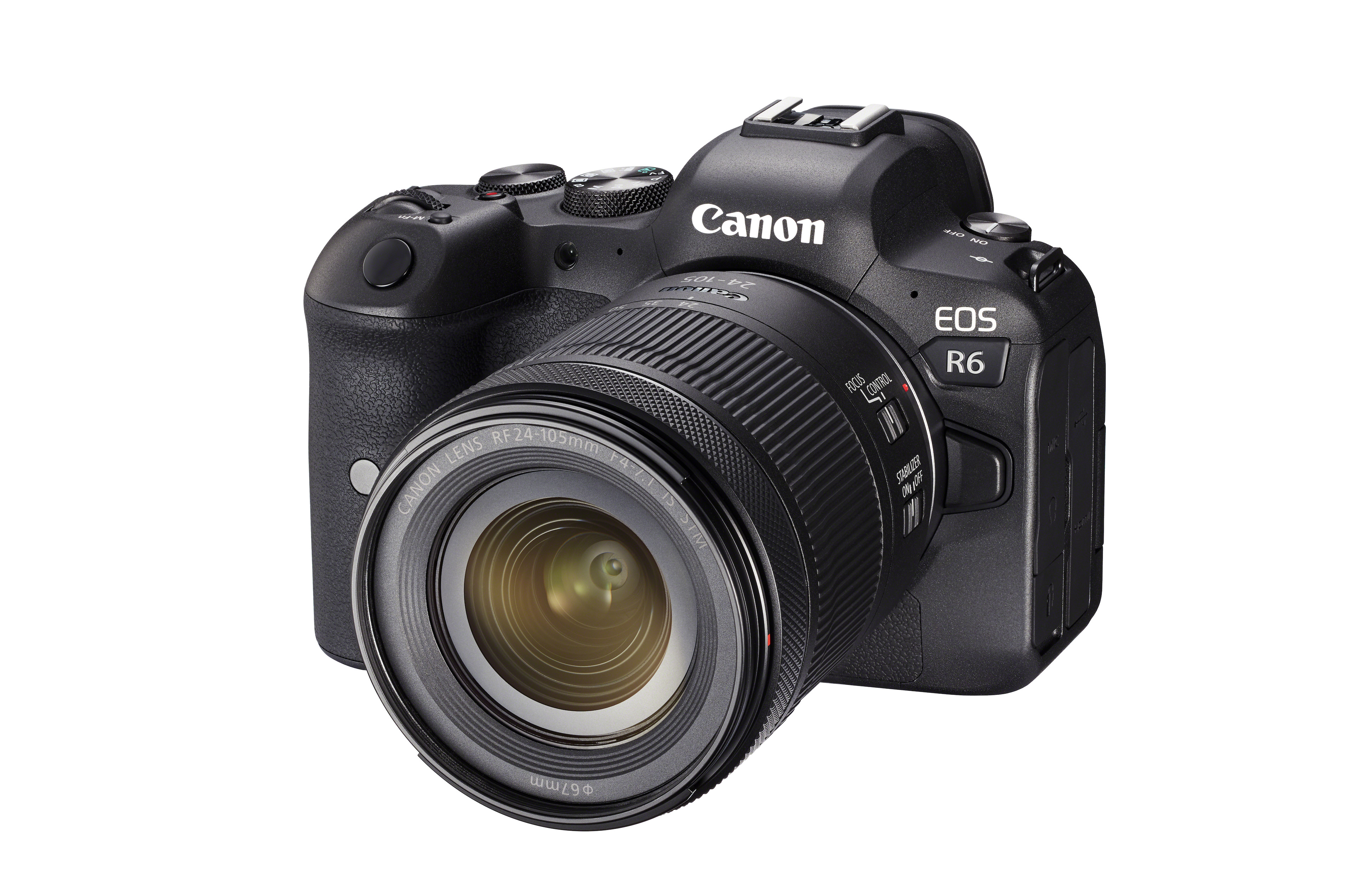 Together with the EOS R5 (tested in Focus 9-2020 and on CameraStuffReview), Canon also presented a full-frame system camera. The Canon EOS R6 can be described as the accessible EOS R5. It has a lower resolution for photo and video, but also a lower price.
What do you get for your money? 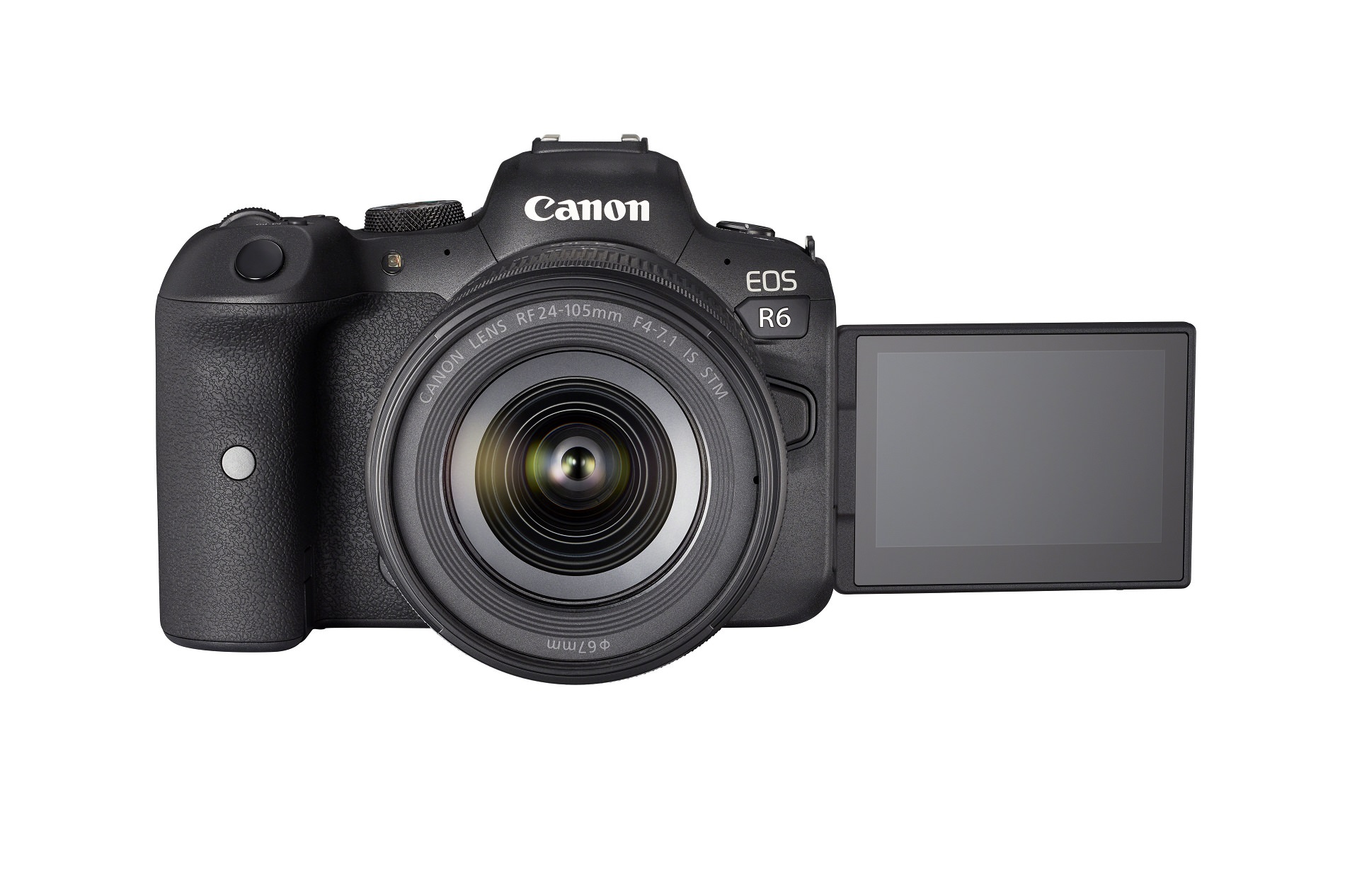 The Canon EOS R6 can be regarded as the mirrorless successor to the EOS 6D Mark II: a full-frame camera with slightly lower specifications than the top model (the EOS R5 or the EOS 5D Mark IV), but accessible for a much larger group of photographers due to its lower price.

The biggest difference between the EOS R6 and the EOS R5 is the image sensor. The R5 has a 45-megapixel image sensor with which it can film in 8K resolution (4 times the number of pixels of 4K), while the R6 has a more modest resolution of 20 megapixels for photo and 4K for video. The sensor in the EOS R6 is the same as in EOS-1D X Mark III, but with a classic low-pass filter instead of the advanced new filter in the EOS-1D X Mark III. The sensitivity range of the sensor ranges from ISO 100 to 102,400 by default, and it can be extended to ISO 204,800 – lower than the ISO 819,200 of the EOS-1D X Mark III. The video specifications of the EOS R6 are also less impressive than those of the R5; in 4K resolution, the R6 reaches up to 60 frames per second, and in Full HD resolution up to 120 fps, resulting in a 4x slow-motion effect. In 4K the R6 does not use the full width of the sensor (94%), in Full HD the full width is used. As with the R5, the recording duration is limited: here a maximum of 30-40 minutes for 4K, depending on the frame rate. Any use of the camera, including for photos, is at the expense of the remaining time that you can still film before the R6 needs to cool down. The camera gives an estimate of the remaining time as soon as you switch to video mode.

The Canon EOS R6 also offers the HDR PQ function, where images are stored as 10-bit HEIF instead of 8-bit jpeg. However, software support for HEIF files is still in its infancy. 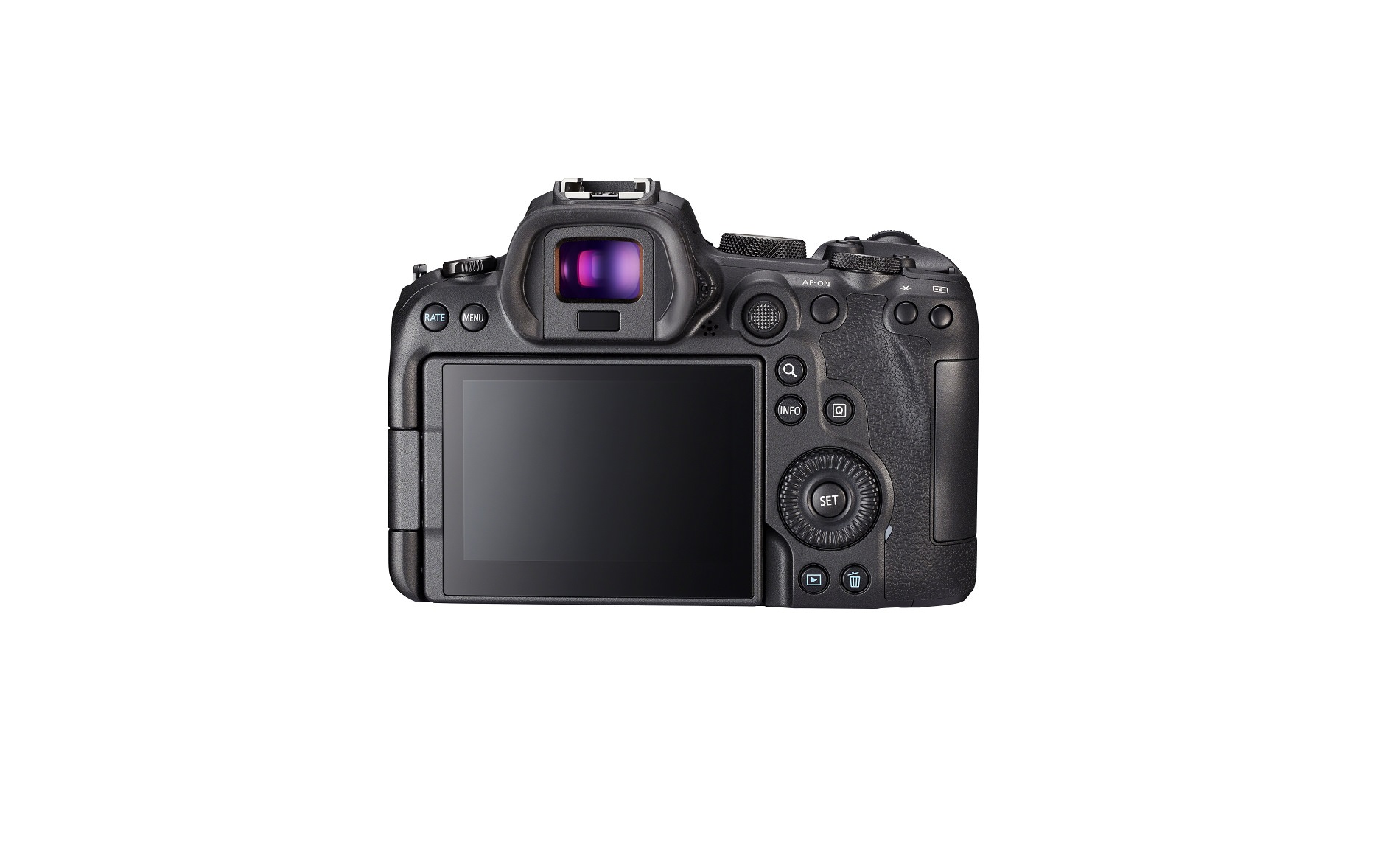 The lower price is of course not only due to the sensor; there are also physical differences. The EOS R6 is the same size as the EOS R5, but weighs less: 680 grams instead of 740 grams. That is because the outer panels are made of polycarbonate reinforced with glass fiber, and not of a magnesium alloy like the EOS R5. The dust- and splash water-resistance of the EOS R6 is also a step lower. The screen at the back is slightly smaller (3 inches versus 3.2 inches on the R5) and counts fewer pixels (1.6 versus 2.1 million). The electronic viewfinder has a resolution of 3.6 megapixels, compared to 5.7 megapixels on the R5. The R6 also lacks a status screen on the top.

As we wrote in our test of the EOS R5, Canon has brought the operation of the system cameras back into line with the SLR cameras after the experiments with the EOS R and RP. That is also the case on the R6.

The R6 even sacrifices the new-type shooting mode dial, which the R5 still has, in favor of a classic dial. Fortunately, Canon has not scrimped on physical control elements. The R6 has, among other things, two adjustment wheels on the top, a turning wheel on the back, a joystick to choose the AF point and an AF-ON button. The camera can therefore be adjusted as smoothly as the R5.

Even more similarities: just like the R5, the R6 has built-in image stabilization with sensor shift. The sensor shifts horizontally and vertically to compensate for vibrations and movements of the camera over five axes. The maximum gain depends on the lens used; in combination with the RF 24-105 mm F4 L IS USM that I used for this test, no less than eight stops are achievable.

Another difference is that the Canon EOS R6 has two UHS-II SD card slots, where the EOS R5 has one CFexpress slot and one UHS-II SD slot. Because the R6 does not record 8K video or 120fps 4K video, the higher speeds of a (currently expensive) CFexpress card are not necessary. The EOS R5 and R6 do use the same LP-E6NH battery. According to Canon, this achieves 510 shots using the screen and 380 shots with the electronic viewfinder. 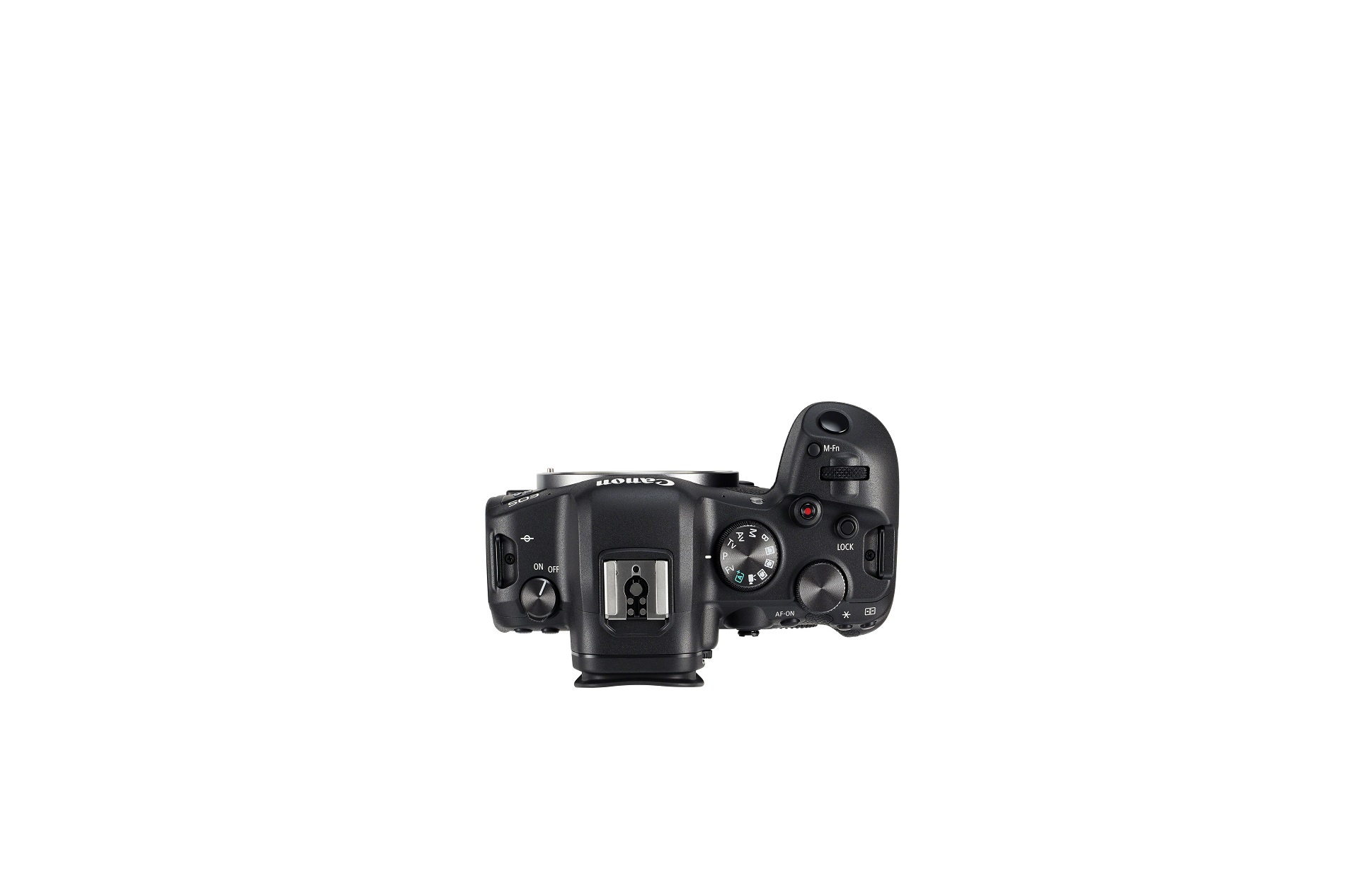 As with the Canon EOS R5, the R6 offers the choice between a mechanical and an electronic shutter, with maximum series speeds of 12 and 20 frames per second, respectively. The electronic shutter is completely silent, a big advantage when photographing events and (classical) concerts. The mechanical shutter can also be called silent. When using the electronic shutter, I did notice a rolling shutter effect when panning. Apparently, the sensor is not read out as fast as on the R5, so that vertical lines start running diagonally with fast moving subjects or with fast camera movements.

The R6 uses Canon’s updated Dual Pixel CMOS AF, with 1,053 focus points covering almost the entire image area. Here, too, the camera can automatically focus on faces and eyes and continue to follow them. From the menu, you can choose to follow people or animals. In practice, the AF delivers the same excellent performance as with the R5. The autofocus tracking works impressively well. The AF system of the R6 is a huge improvement compared to the EOS R and RP. Where I couldn’t recommend the EOS R and RP for sports photography, I don’t have that reservation with the R6. With a fast sport such as rugby, the camera focused on the face of a player and continued to follow it smoothly.

The image quality for photo is comparable to that of the Canon EOS-1D X Mark III, with appealing colors and a high level of detail. It goes without saying that the resolution is lower than the EOS R5 with its 45-megapixel sensor has to offer, but the 20-megapixel sensor of the R6 can withstand the comparison with 24-megapixel cameras. The light measurement works perfectly and the RAW files leave plenty of room to brighten up shadows. The lower resolution is an advantage when it comes to noise. The noise reduction on the R6 yields very good results up to ISO 6,400 in jpeg shots, one stop more than the R5. At higher sensitivities, detail disappears, although these shots remain usable in smaller formats. 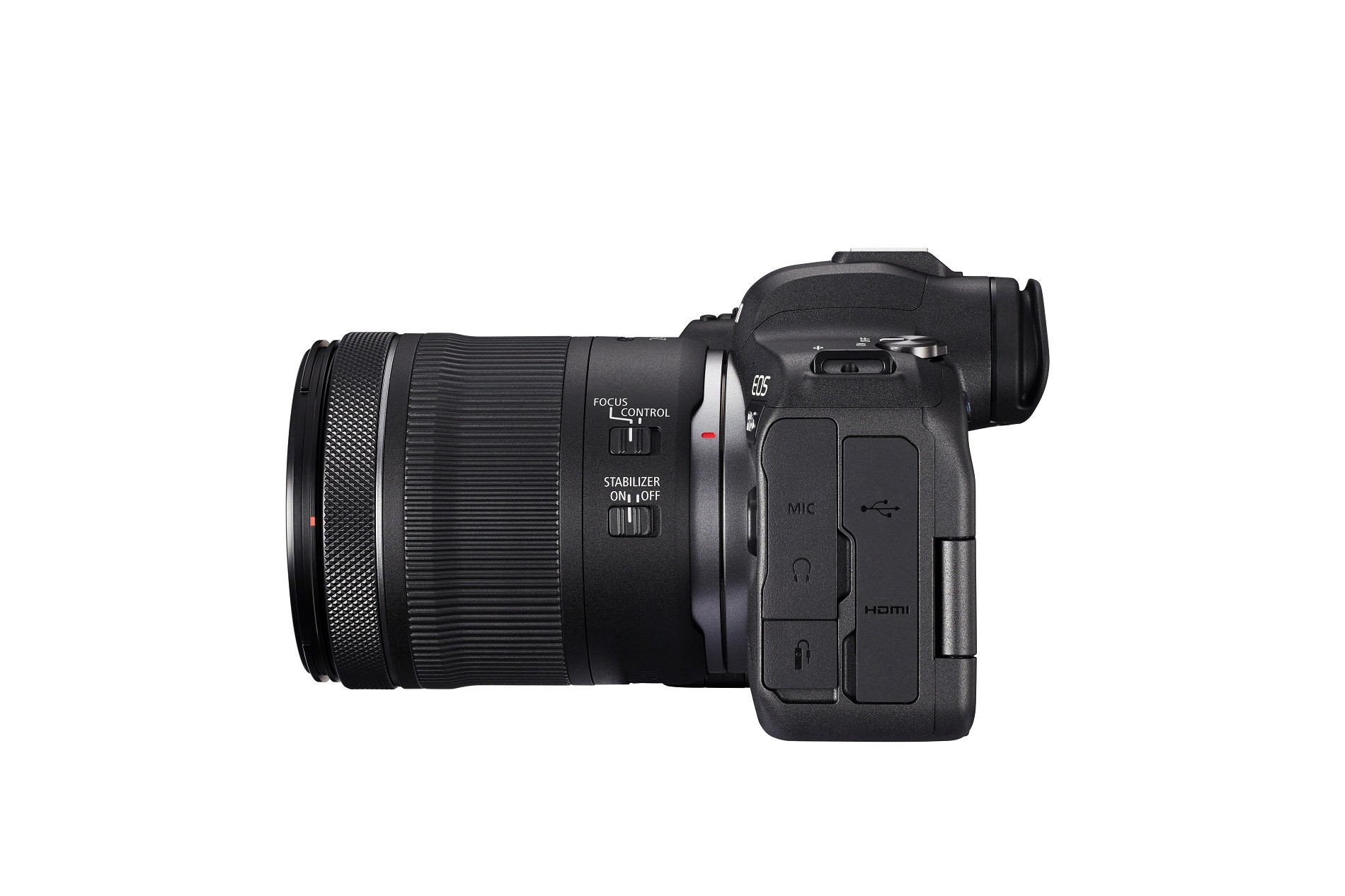 Unless you really need 45 megapixels or 8K, the R6 is the better choice.

The EOS R6 gives you much of the good stuff from the R5 for a much lower price. You do miss the higher resolution of 45 megapixels and the better video specifications of the top model (8K, 4K HQ and 4K slow-motion), and you get a slightly lower build quality and less good screen and viewfinder. But the image quality is very good. Unless you really need 45 megapixels or 8K, the R6 is the better choice.