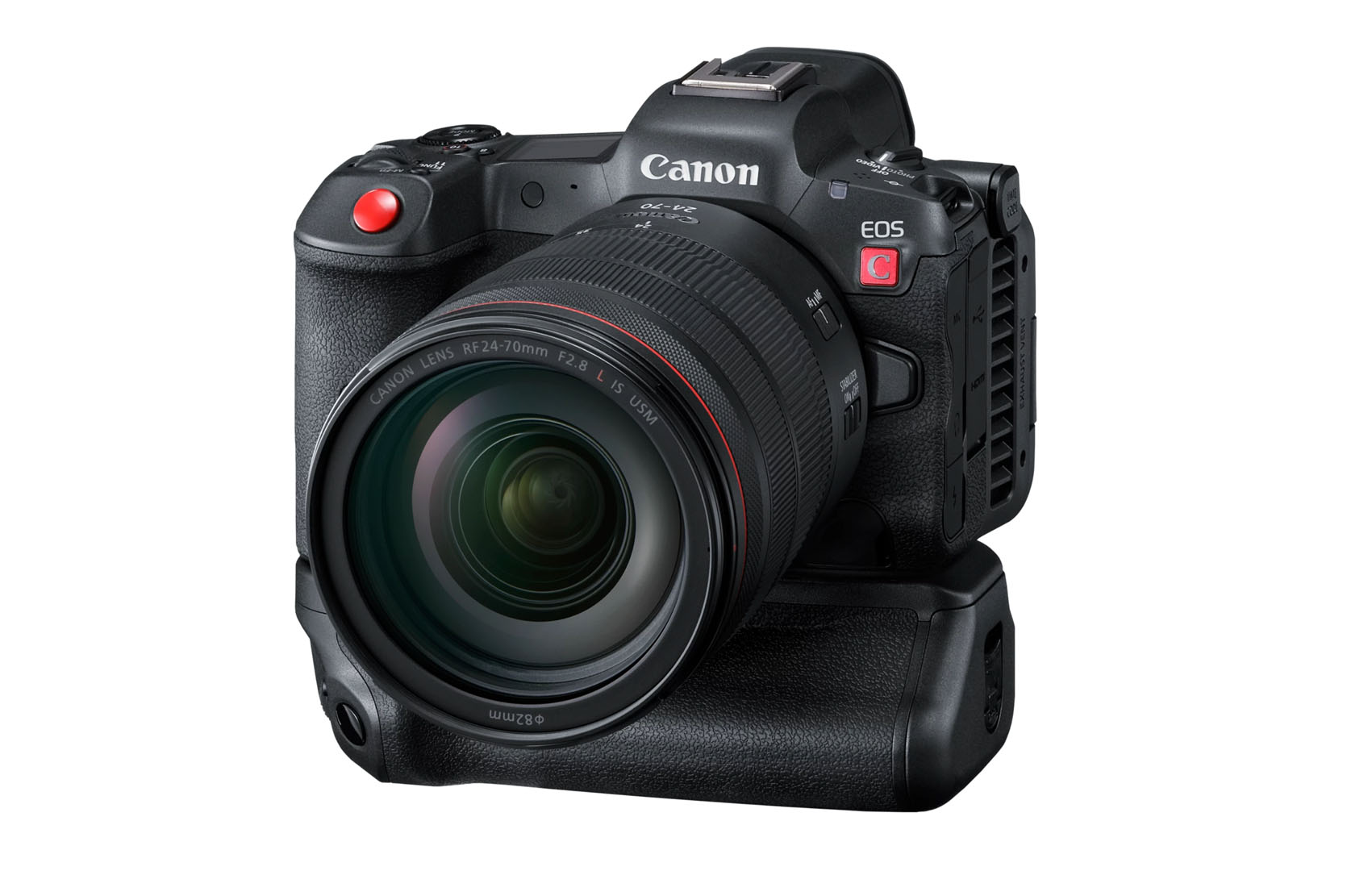 The Canon EOS R5C is a model that comes in addition to the existing Canon EOS R5. The R5C offers many additional possibilities for the advanced videographer. The R5C also deals with a number of video-related drawbacks (but not all) of the R5. At the same time, the EOS R5C remains a true hybrid camera, allowing you to take photos at the same high resolution as the EOS R5.

The Canon EOS R5C bridges the gap between the mirrorless R models and Canon’s film cameras.

The boundary between photographic cameras with which you can film and pure cinematic cameras is increasingly blurring. And the Canon EOS R5C is a clear example of this. Until now, there has always been a fairly clear distinction between the cameras you can film with, such as the EOS 5D models on one side, and the pure cinematic cameras like the C100, C300 and C500 on the other side. Canon has recently made that gap much smaller in two ways. On the one hand, the EOS R5 already offers many more film capabilities than the SLR cameras ever did, and on the other hand, the Canon C70 has reduced the distance between the cinematic cameras and Canon’s mirrorless R models. The EOS R5C may close that gap completely. 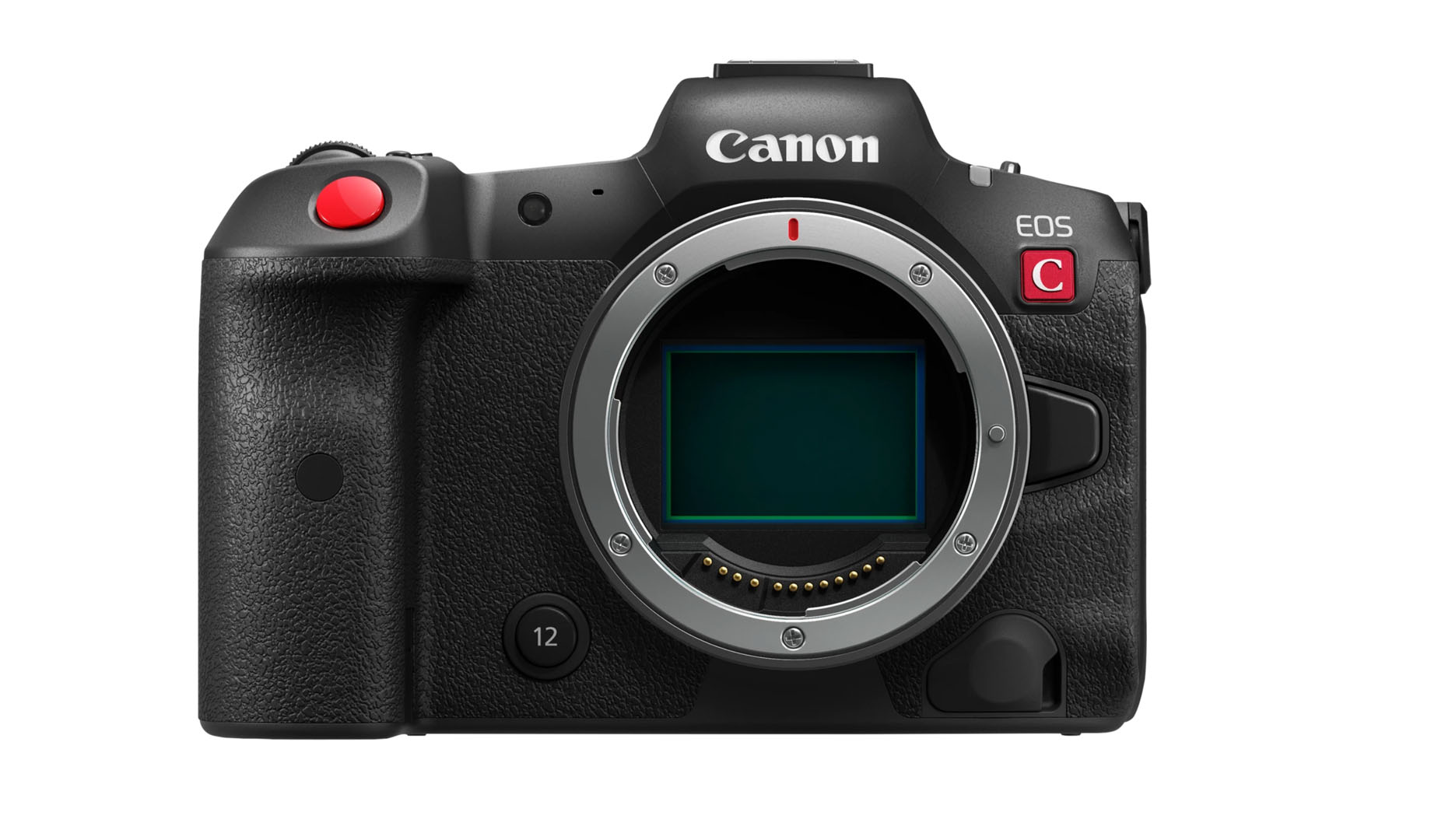 The EOS R5C can be seen as an EOS R5 with an attached fan. One of the biggest criticisms of the EOS R5 was that the camera can get too hot when filming in the highest video qualities. The EOS R5C effectively takes care of this. However, Canon has gone a step further than adding some extra cooling. The camera now has an on/off switch with separate settings for photo and video. If you start the camera in the video mode, you actually get an EOS camera with all the capabilities you expect. While the EOS R5 could only show a histogram that also disappeared during recording, the EOS R5C has waveform and vector scope as tools. The EOS R5C can now also record in 8K/60p, compared to 30p for the EOS R5. Slow motion in 8K is now also possible. The option is even available in Canon’s 12-bit Cinema Raw-Light format. Thanks to the cooling, there is no limit to the recording time even in this quality. 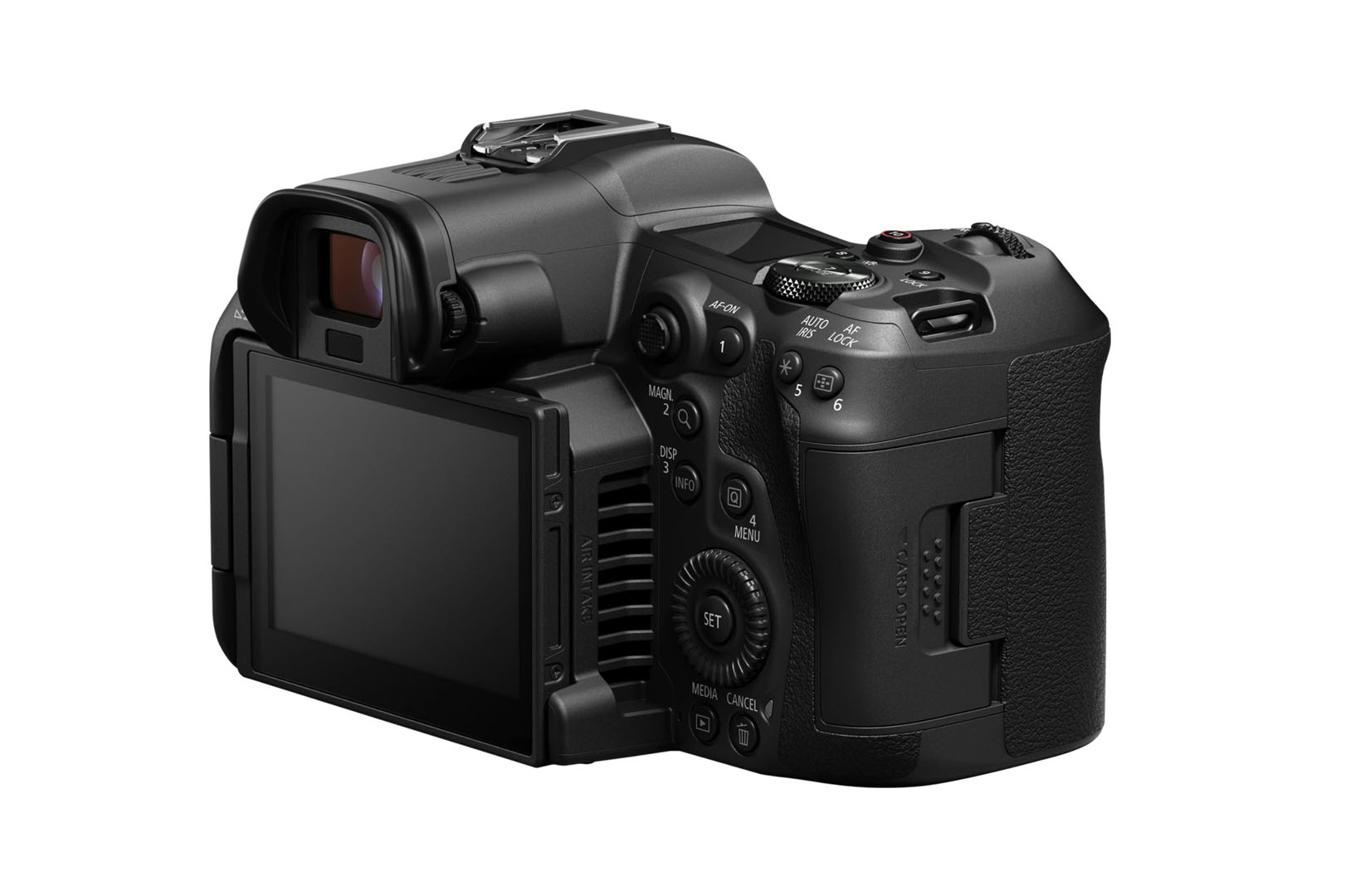 The EOS R5C is in many respects an (even) better video camera than the EOS R5. Nevertheless, the camera is not just an improved R5, and it is not yet perfect as a cinematic camera. An important difference with the R5 is the lack of built-in image stabilization. According to Canon, this is because most professional videographers are more likely to use the camera on a gimbal or tripod to stabilize the images. Image stabilization can also cause problems in some situations. For example, when the camera is mounted on a moving car. An additional advantage is that the sensor can easily be cooled if it is attached to the heatsink. It does mean that the camera is slightly less suitable for shooting, both stills and film, by hand.

The EOS R5C does have electronic stabilization that can work in conjunction with image stabilization in EOS lenses. This substantially eliminates the lack of image stabilization in the camera, but not all EOS lenses have stabilization. The electronic stabilization also causes a small crop of about 1.1x. There is still something to be said about the lack of image stabilization in the camera. This is actually not the case for the micro-HDMI port. On a camera like this, there should definitely be a large HDMI type-A connection. Now Canon offers a block with which you can attach the cable to the camera and you can record everything internally. That makes a difference, but with that large expansion at the back, they should have been able to create space for a larger HDMI port. Another surprise is that the camera consumes so much power when filming at the highest quality and speed that the battery can no longer supply power to the lenses. It is the result of sticking to the standard Canon batteries, which have never been designed for such heavy-duty applications.

If you work with cine lenses, with manual focus and manually operated apertures, then that is no problem. But if you want to film in 8K 60p with RF lenses, you need a power bank with PD in addition to the Canon battery in the camera to ensure that the autofocus, aperture control and image stabilization of your lens continue to work. For the less demanding film formats and photographers, these problems do not arise. 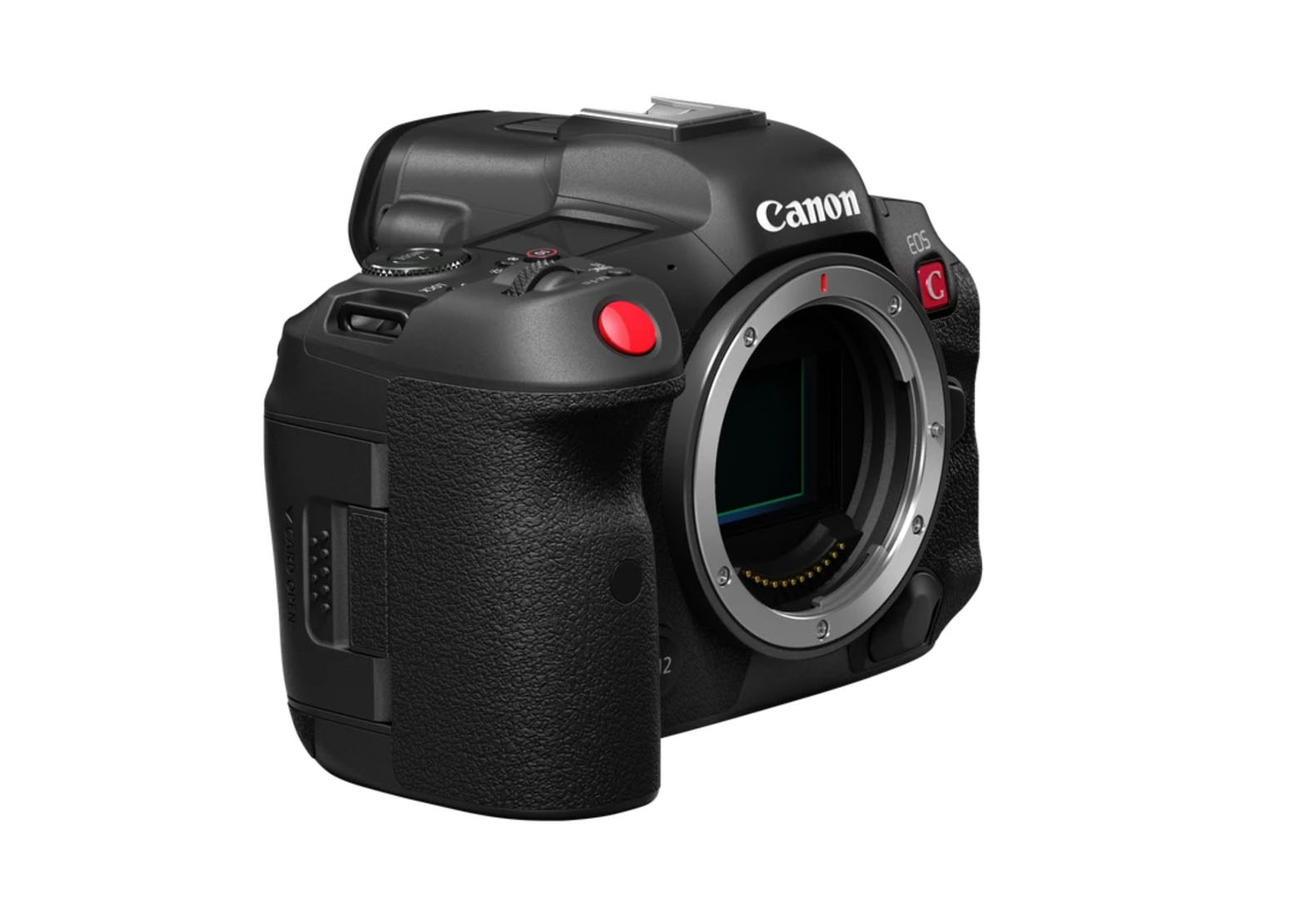 Viewed from the front, the Canon EOS R5C is clearly an EOS R5, with a red release button as the only indication that this is really a different type. If you look at the camera from above, you will immediately notice the extended viewfinder and the big extension on the back. The on/off switch has been given an additional position: video. Some of the buttons have been given two texts that indicate what the function is in the photo mode and in the video mode. The extension at the rear also has an additional connection for time code. Otherwise, the camera is the same as the EOS R5. This means a CFexpress type B and an SD card slot on one side and the same connections as on the R5 on the other side. So that includes the micro-HDMI port, which actually doesn’t belong on a movie camera. 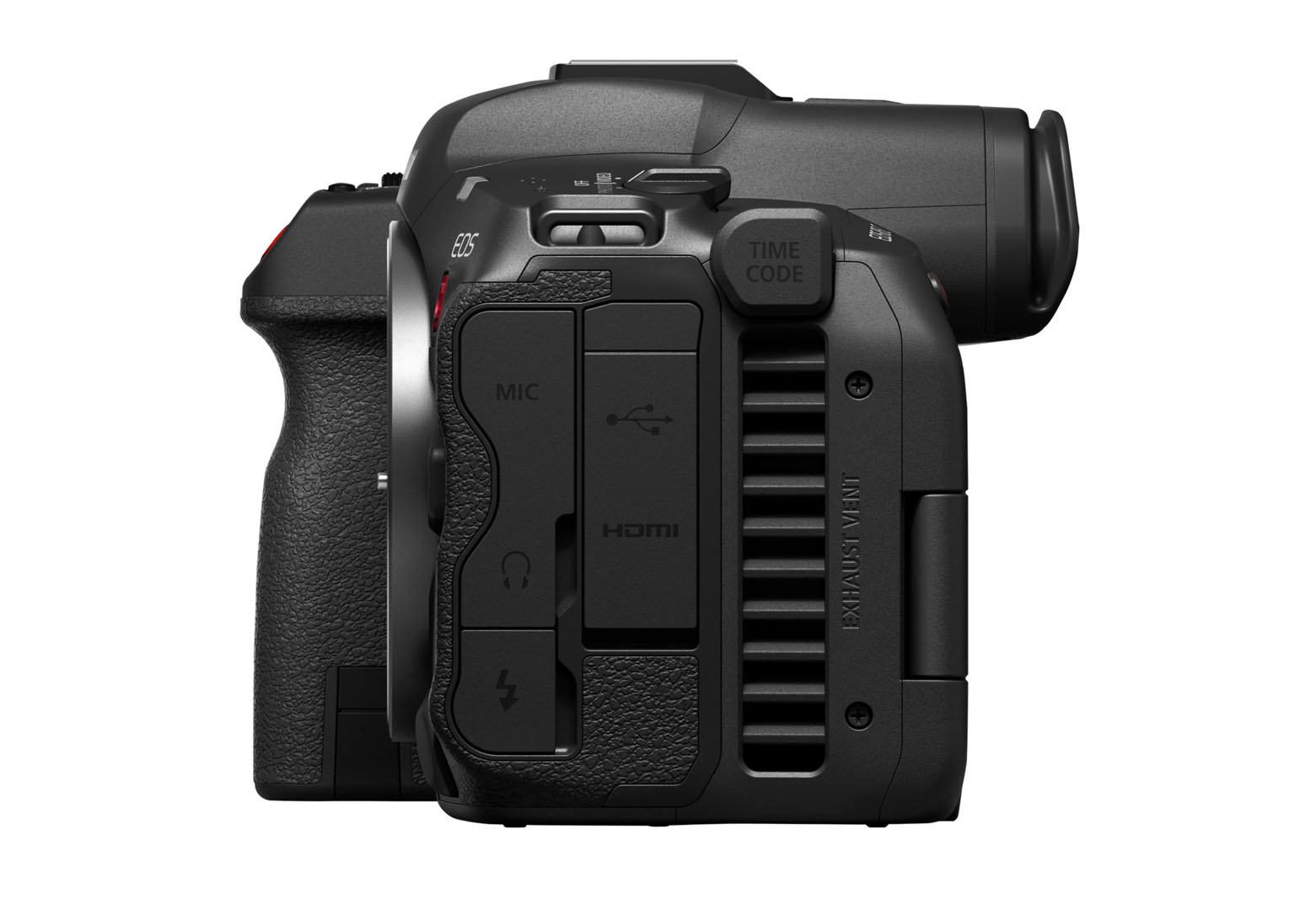 The Canon EOS R5C might as well be called a dual camera or a split personality (but in a good way) as a hybrid. This is because the menu changes depending on which side you move the on/off switch to. In the “photo” mode, you get the menus we know from the EOS R5. In the “video” mode, you get the menus that belong to a cinema camera. The camera will no longer show a histogram but a waveform, and you will no longer see shutter speeds but a shutter angle. On the side of the extension there are now large cooling slots where the air for the fan can move in and out. It looks as if the camera is no longer weatherproof, but according to Canon, the camera is still resistant to (splash) water and dust. 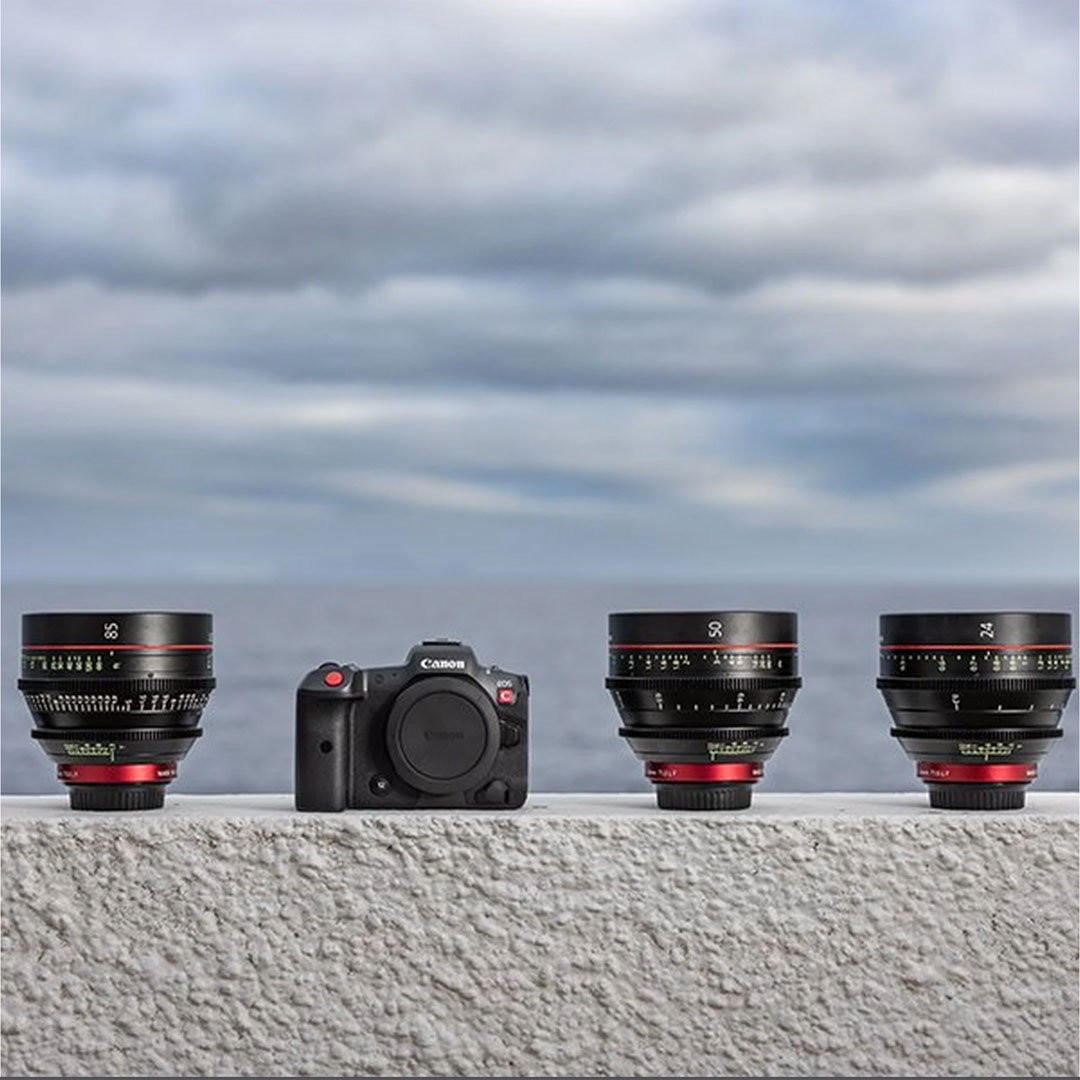 The Canon EOS R5C offers the same photographic capabilities as the EOS R5. Shooting in 45 megapixels up to 20 frames per second. There are new capabilities in the video area. The R5C can now also film in 8K HDR in Hybrid Log Gamma. You can also film with the R5C in 8K up to 60 frames per second and do so in Canon’s Cinema Raw Light. Another new feature is that Cinema raw is now available in three variants: raw HQ (High Quality), raw ST (Standard Quality) and raw LT (Light Quality). All raw versions are 12 bit. For those who need more than that, the EOS R5C also supports Canon’s 10-bit XF-AVC format. XF-AVC is a format that is also available on the other Canon film cameras. This makes processing the files easy.

The Canon EOS R5C has the same autofocus capabilities as the R5, also in video. And that’s unique, because there are capabilities that the Cinema models from Canon do not yet have. The EOS R5C can, for example, focus not only on the eyes and human faces, but also on the eyes of animals. The camera can also recognize cars. This is also the case with the R5, but not with the film models, for example. 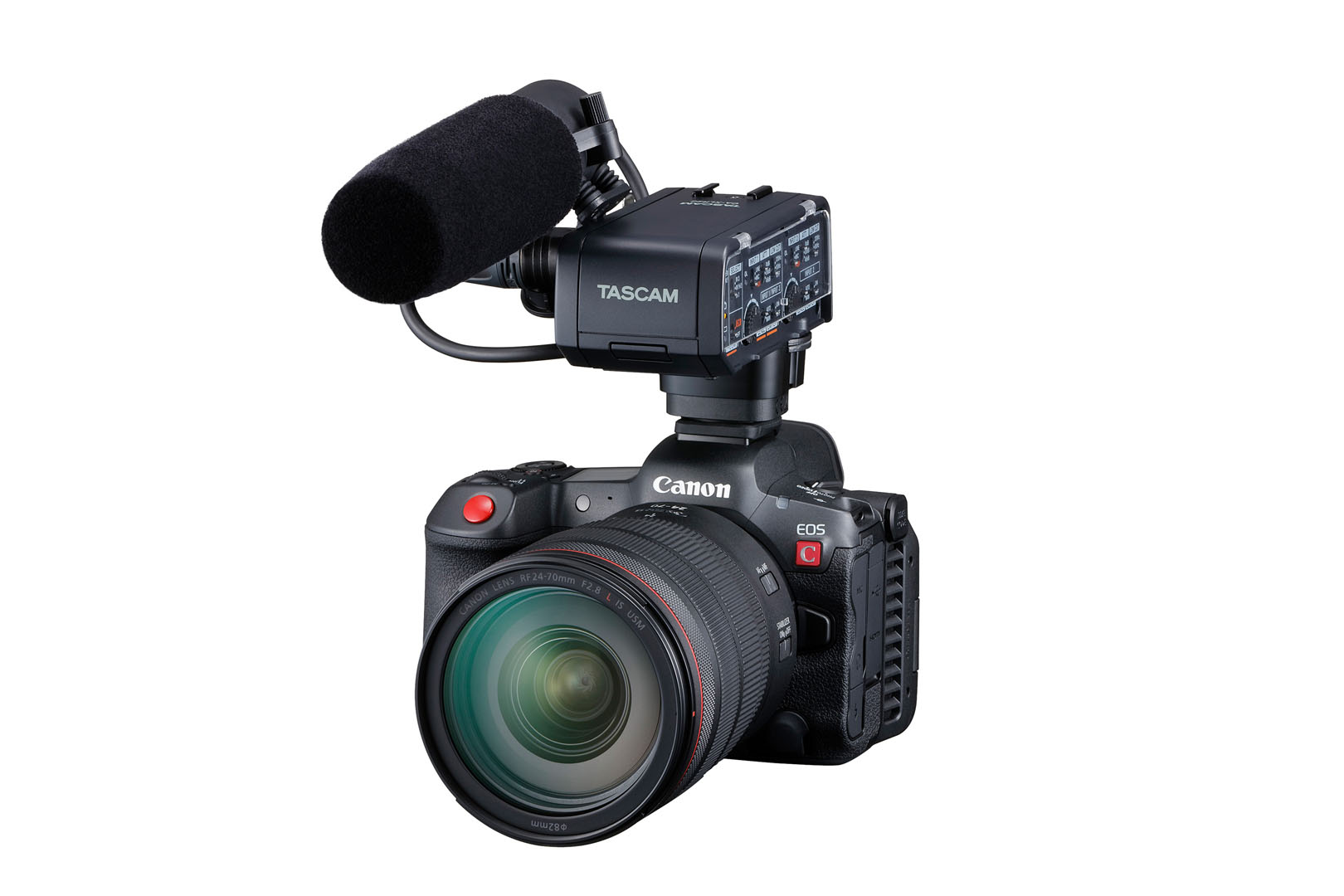 In addition to the additional features such as the 60p in 8K, the EOS R5C also has a number of other special functions. For example, the R5C has a hot shoe with extra contacts. This allows the R5C to use a digital adapter for microphones with an XLR connection. What is unusual is that the adapter is not from Canon, but from Tascam. The CA-XLR2d has 4 channels for audio. The Canon EOS R5C also has a connection for time code, making the camera much easier to use in combination with other film cameras. Another special feature is that when using anamorphic lenses, the camera can display the images undistorted. There is support for a 1.3, 1.8 and 2.0x correction. 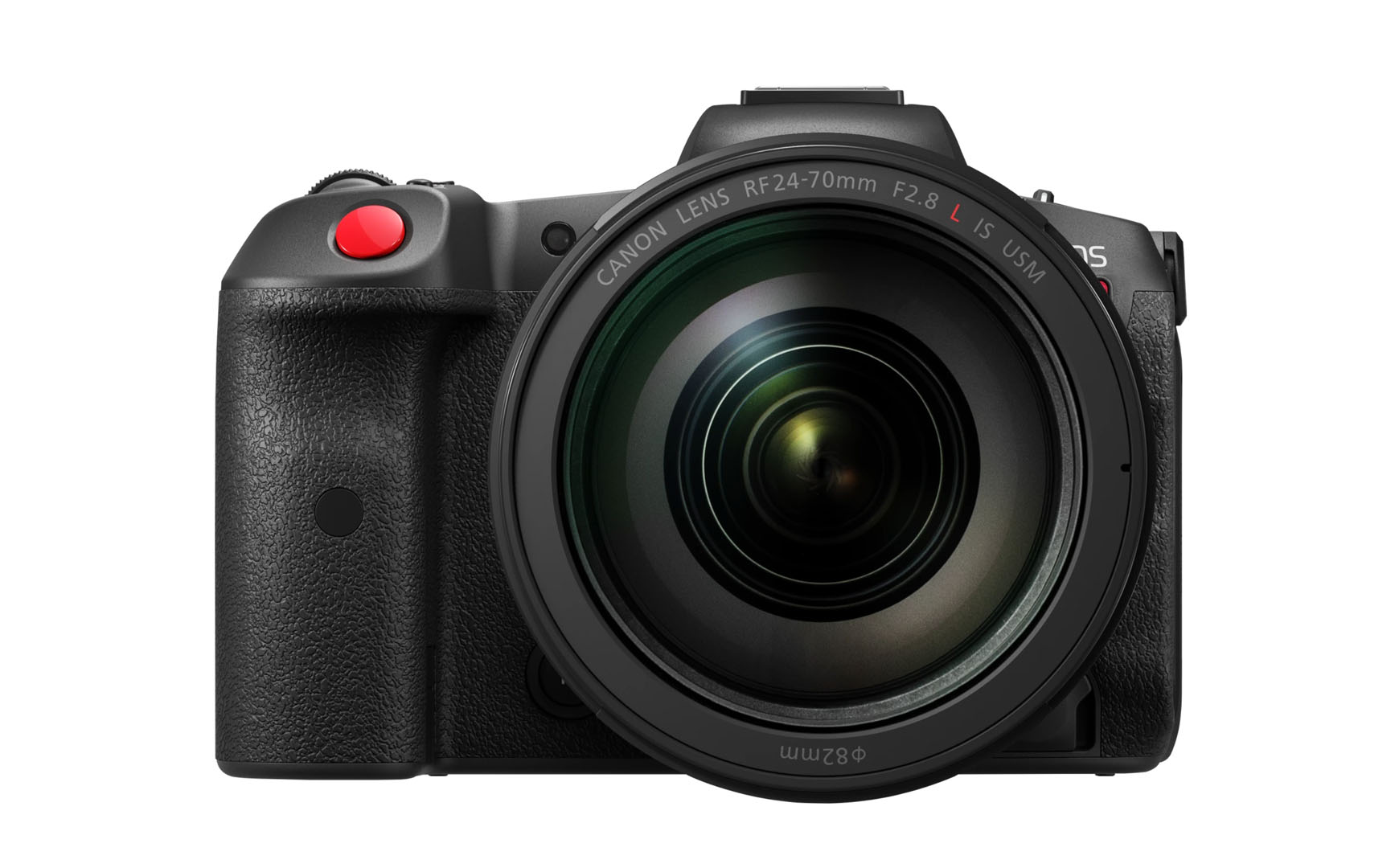 The Canon EOS R5C is a camera that has little competition if you buy it specifically for what the camera can do. The only other hybrid cameras with which you can film in 8K are the Sony A1 and the Nikon Z9. The Sony A1 does not do this in 60p, but only in 30 frames per second. And both the Nikon and the Sony are significantly more expensive than the Canon. The Canon is also the only one of the three that can show vector scopes and waveforms, for example. If you like to work with those, you will have to fit the Nikon and the Sony with an external monitor, which you can probably do without on the Canon. On the other hand, the Sony and the Nikon have built-in image stabilization. That can be an advantage if you want to shoot by hand. With the Canon, you can partially overcome this by opting for a lens with stabilization, possibly in combination with the electronic stabilization, but that does limit your options. 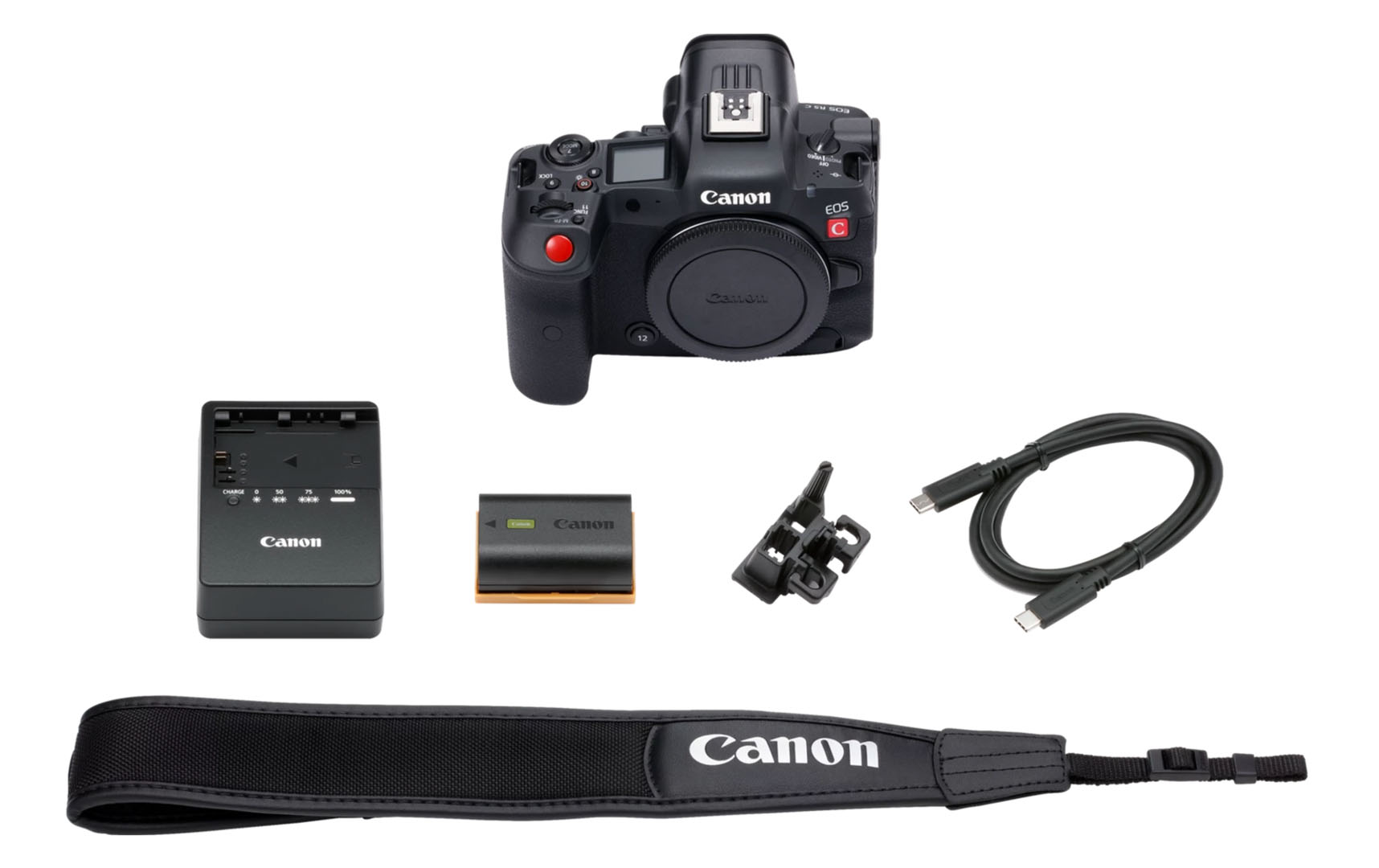 The Canon EOS R5C is the R5 model that you probably want if video is more important to you than photography.

The Canon EOS R5C is a camera that closes the gap between the mirrorless system cameras from Canon and the cinematic line. Despite the lack of built-in image stabilization, the EOS R5C is still a formidable full-frame camera with a high resolution sensor, a high shooting speed of up to 20 frames per second and an excellent autofocus system. At the same time, the EOS R5C is the entry into the Canon cinema line. The camera could have just been called the C50. Almost everything you will want to have now and in the next ten years in terms of file formats and recording options is already on the R5C. What to shoot 12-bit raw, 60 frames per second in the highest resolution, record digital sound? Check, check, check! The icing on the cake is that the EOS R5C is a bit but not a great deal more expensive than the EOS R5.