Skip to content
The Canon 80D is Canons newest SLR with APS-C sensor. “A powerful, fully equipped DSLR that offers everything that you need – at your fingertips – to further develop your talents in the area of photography and video ” – so reads the press release from Canon. It’s not a starter model, but also not a top camera. It is one for the serious amateur. The body is practically the same as that of its predecessor, the Canon 70D, but it has a new 24-megapixel sensor with dual-pixel technology, with which it focuses lightning-fast during filming. We have not yet encountered any SLR camera that focuses as fast for photo and video as the Canon 80D. Are there also shortcomings? How good is the dynamic range of the Canon 80D, for example? After all, the dynamic range is the most eye-catching camera property on which Canon cameras have lagged behind the competition in recent years.

DThe most comparable camera is the Nikon D7200. The correspondences between those two are more plentiful than the differences. The Nikon is a bit less expensive, is about the same size and weight, and has, just like the 80D, a 24 MP sensor. In practice, the Nikon D7200 has a bit higher resolution, because the Nikon is lacking an anti-aliasing filter. They both have a shortest shutter time of 1/8000 of a second and a built-in flash. The Nikon D7200 has a dual card slot, while only 1 SD card can be placed in the 80D. The Canon 80D is marginally faster in the continuous shooting mode: 7 fps versus 6 fps for the D7200. The Canon 80D also has a bigger buffer, so that you can make an interrupted series of more than 50 shots before the buffer is full. They both film in Full-HD with 1080p/60, but the Nikon can only film with 60 frames per second in the ‘crop mode’. Neither has 4K video capabilities. The 80D has a tilting touchscreen; the Nikon a fixed screen without touch function, but it is larger (3.2 inch versus 3 inch). The Nikon has more AF points but is lacking the dual-pixel focus for video. The Canon AF is therefore faster when you use auto focus for video recordings. In the area of light sensitivity, it’s the Nikon again by a mile: it goes up to 25600 and is expandable to 102400. All in all, there is no “winner” for us. In fact, the specs look eerily similar to each other: The Nikon scores as far as specifications are concerned in light sensitivity; the Canon, on phase detection AF for video.

{vimeo}167927884{/vimeo}
A solid competitor for the SLRs are currently the cameras with electronic viewfinders, like those from Sony, Fujifilm, Olympus or Panasonic. Many photographers still prefer an optical viewfinder over an electronic one, due to the image quality and being able to work in “real time.” But the electronic viewfinders (EVFs) are getting better and are even superior in very low light. A mirrorless camera is naturally less expensive to build than a camera with a mirror and all the mechanical parts associated with that, and a mirrorless camera is more compact. An EVF is, after all, not much more than an LCD screen with a magnifying glass in front of it. As soon as you start making video recordings with an SLR camera, you can’t use the optical viewfinder anymore. At that moment, you clearly notice that there are many more options with a mirrorless system camera, like focus-peaking for manual focusing. For those who want a silent camera, nothing beats a mirrorless system camera with the use of an electronic shutter. We expect that a great many more mirrorless bodies will be released. At the Photokina maybe? 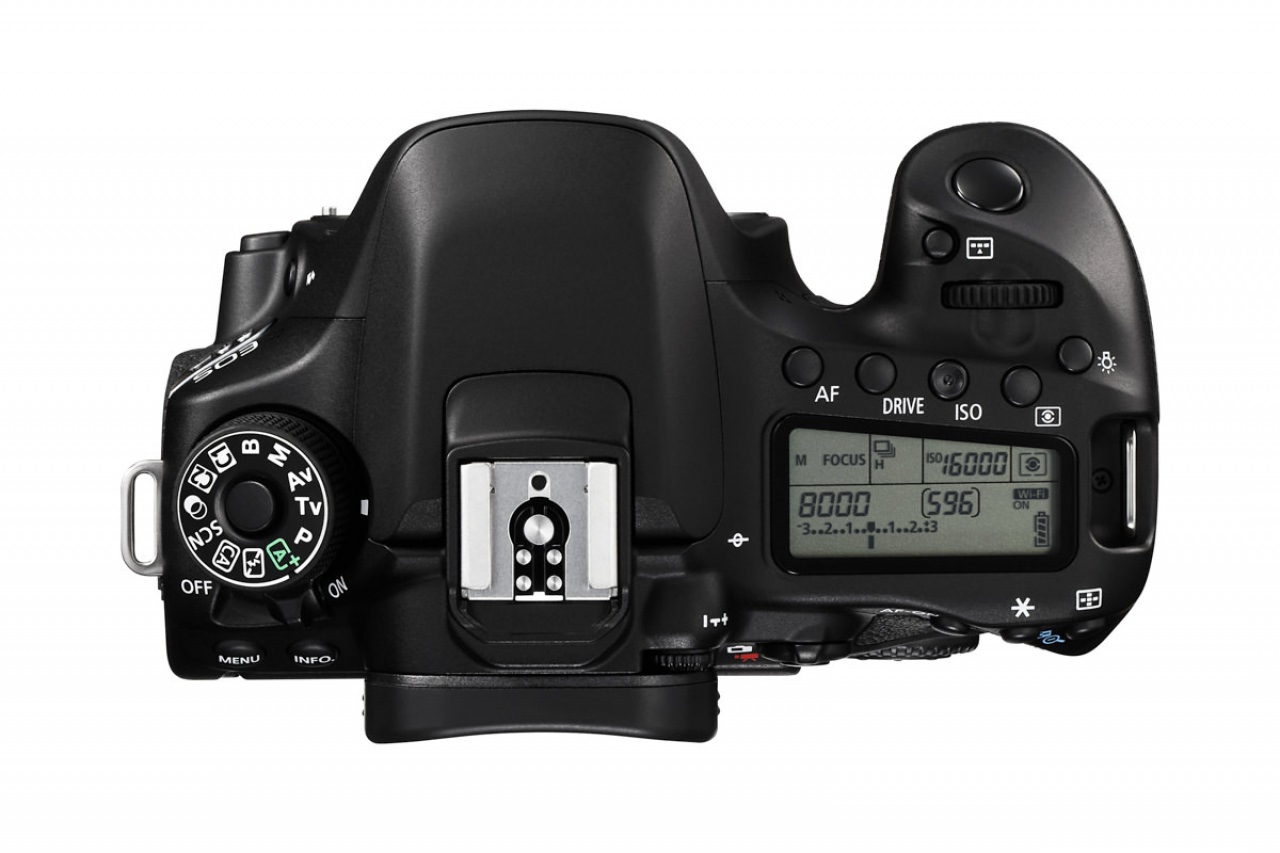 Like all Canon SLRs, the D80 fits nicely in the hand, with nicely rounded corners. Everything is well finished, and the buttons are in logical places. There are numerous options for assigning your own preferred functions to certain buttons. The Canon menus are logically structured with tabs (we like that better than with Nikon), and you can find everything quickly, although we still don’t get why Canon uses the expression “peripheral illumination” when they mean vignetting. With the Q button, you can quickly adjust the essential settings. There is a mini HDMI connection and a USB-slot. With the built-in Wi-Fi and NFC, you can make a connection and share full-resolution JPEGs with smart devices. The 80D does not have built-in GPS, but competitors don’t either. The tendency appears to be adding GPS data to the file later if desired, from your smartphone. The camera has one card slot, for an SD card.

The camera has a great 3-inch LCD screen that folds up and down and rotates. It is also a touchscreen. That is especially handy for designating an AF point in Live View. You can also adjust the camera settings with it, but we don’t really care for that, even if it’s only because your LCD screen quickly gets dirty from that. But some people swear by it. The optical viewfinder leaves little to be desired. The menus on Canon cameras are clear and have therefore gone largely unchanged for years.

We already mentioned it in the introduction: The Canon 80D focuses lightning fast. With the included Canon EF-S 18-135 mm f/3.5-5.6 IS USM kit lens and in daylight: 187 milliseconds from infinity to 1.5 meters. Not as fast as the record holder in our AF test (about 50 milliseconds for the most modern Panasonic cameras), but it is one of the fastest-focusing SLR cameras that we have tested to date. In low light, it becomes a bit slower. The AF can follow a subject (“tracking”), both with the optical viewfinder and in Live View. 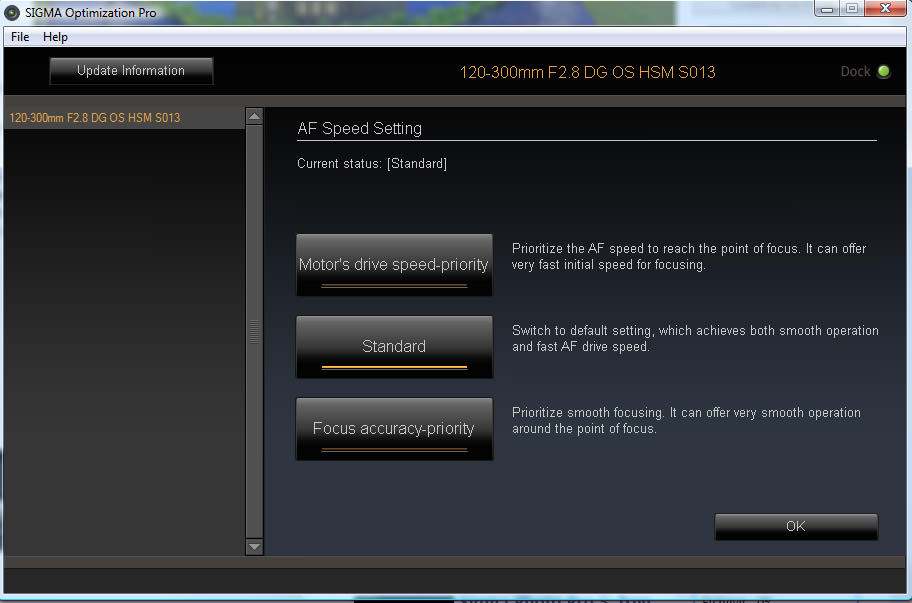 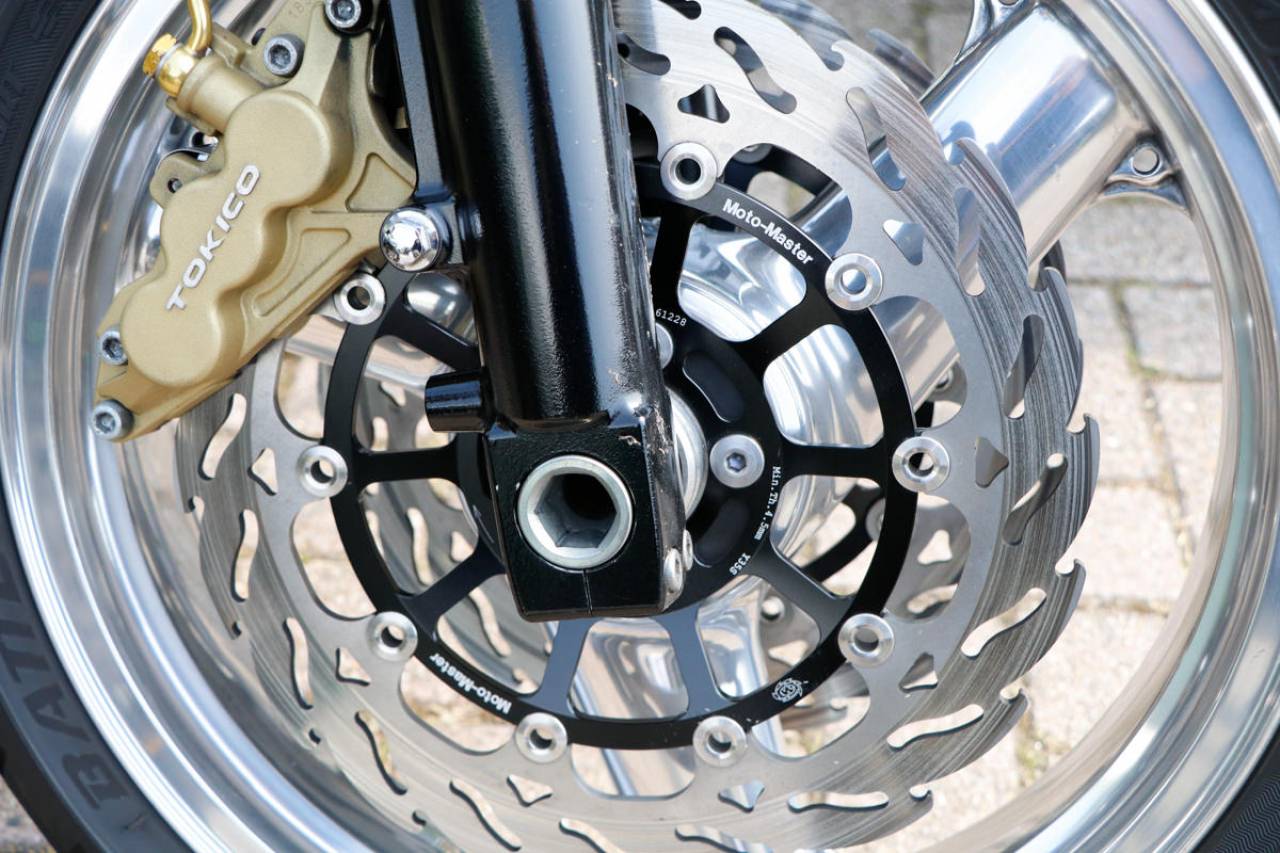 Canon 80D + 18-135 mm USM @ 35 mm 1000 ISO, f/5.6, 1/1000As far as resolution is concerned, the Canon 750D, 760D and the Canon 80D – all with a 24-megapixel sensor – are not very far apart. Even relative to the Canon cameras with a resolution around 20 megapixels, the difference is so small that it is not really an argument for purchasing a new camera. Where Canon has taken a step forward is in the signal-to-noise ratio in the dark areas. During testing of the Canon 60D, we saw that clearly. The Canon 70D showed less banding when you lighten the shadows in post-editing. And the Canon 80D showed a bit less noise in the shadows than the Canon 70D, which also translates into a higher…

Canon sensors store the image information in 14-bit files. In theory, that could deliver a dynamic range of 14 stops. In particular, noise in the dark areas means that a photographer is left with a smaller usable dynamic range – that is to say, with a signal-to-noise ratio of at least 10 left over. With a usable dynamic range of 6.75 stops at 200 ISO, the Canon 80D distinguishes itself in a positive way from all other Canon cameras with an APS-C sensor. This is a better result than with the more expensive Canon 7D mk2, which even has slightly larger pixels. The dynamic range of the Canon 80D is not yet entirely at the same level as the best cameras with an APS-C sensor (Nikon D500, Sony A6300, Nikon D7200), but it is certainly a big step in the right direction. 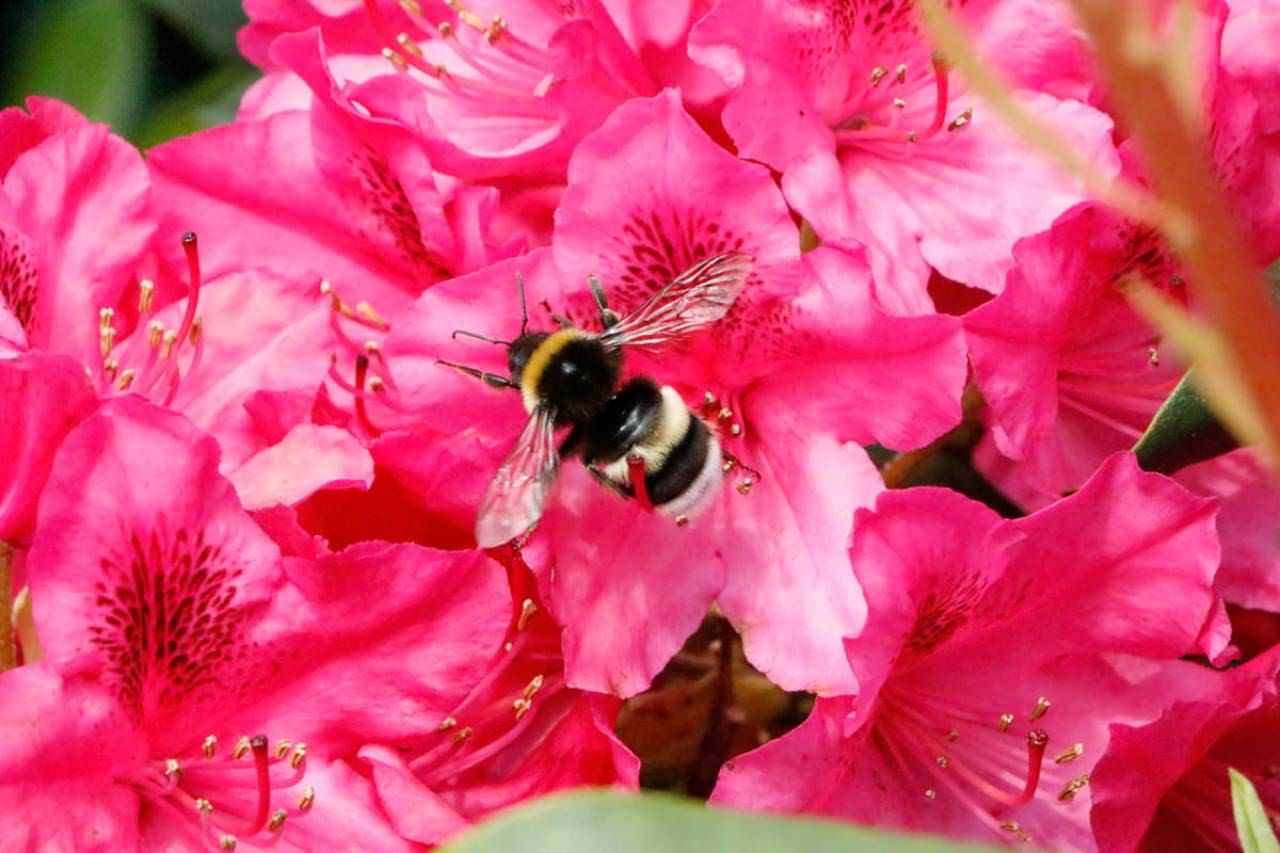 In the standard image style, Canon shots are usually a bit too warm, which many photographers like. You get a more accurate color reproduction with the Natural image style. The color reproduction is then reasonably neutral, although you might not think so on the basis of the picture above. But those rhododendrons were really intensely red. This shot was taken with the highest ISO settings, and the color reproduction did not suffer from it. If you enlarge pictures from over 3200 ISO, then you see that the noise suppression comes at the cost of the details. Other brands choose less noise suppression, which produces a less plastic character – but more visible color noise. It is a matter of taste, and you can adjust the degree of noise suppression for jpg files that are stored in the camera. 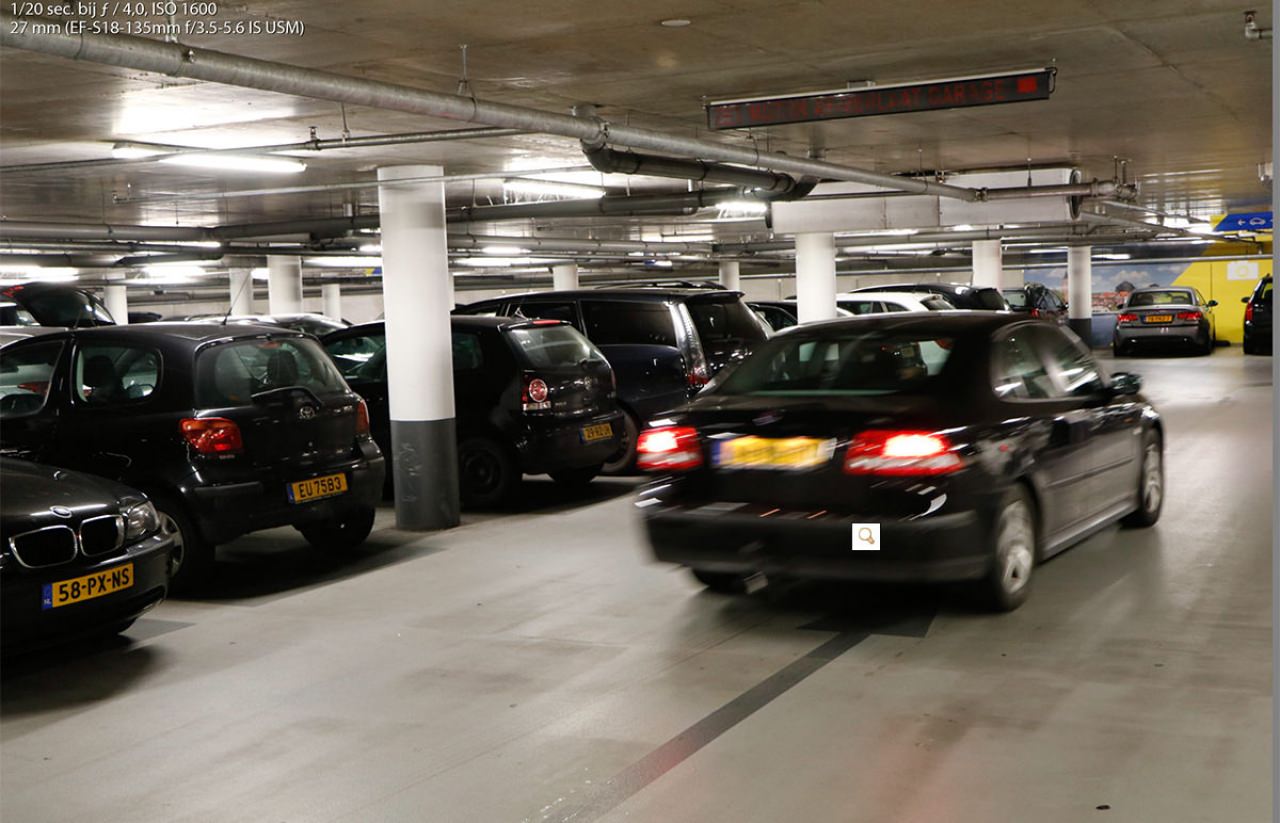 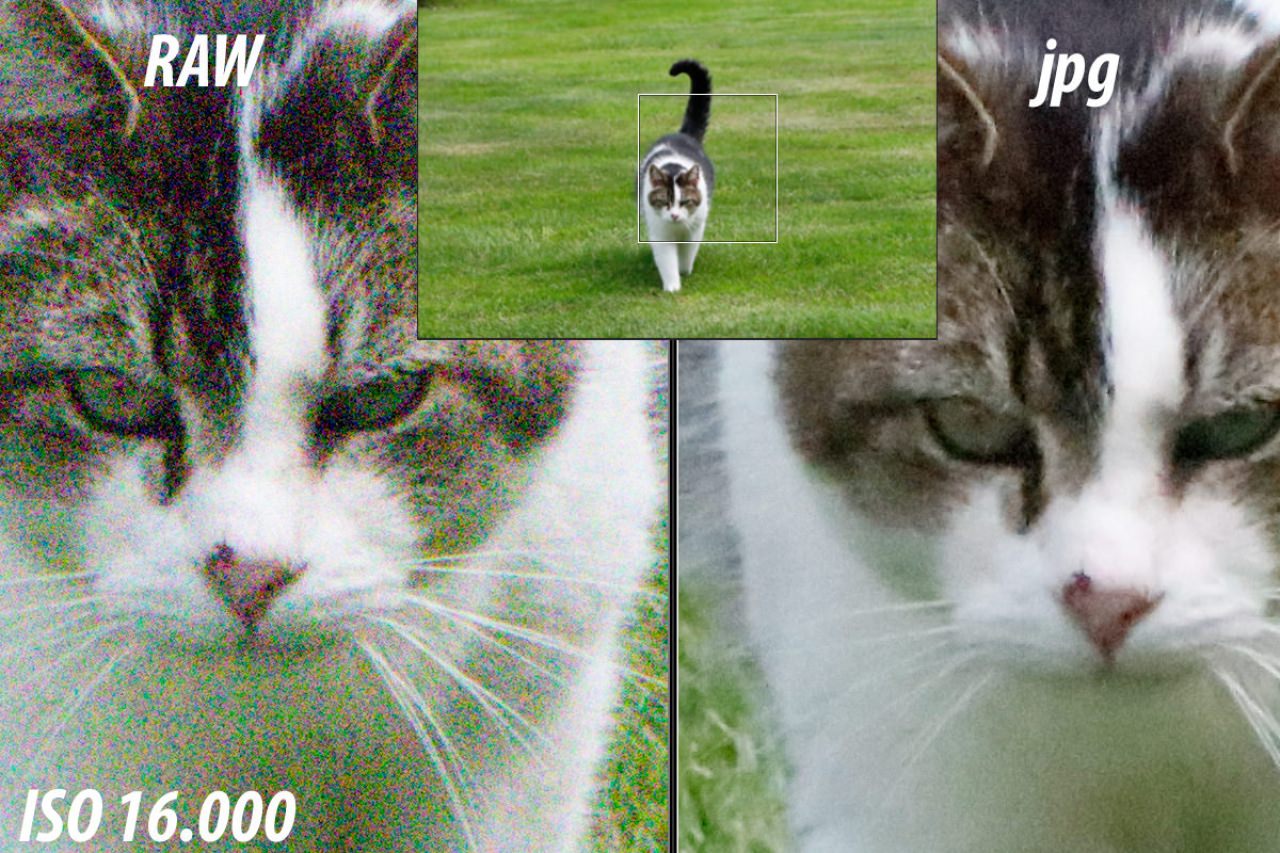 At the highest ISO setting of 16,000, there is of course rather a lot of noise. But in the in-camera JPEGs, that is expertly removed, with the retention of color information. There is no sign of a purple or green haze, which you commonly find at extreme ISO values. Even so, the 80D is beaten by the competition as far as signal-to-noise ratio is concerned.
lens advice Canon cameras
Canon lens (p)reviews
Canon camera (p)reviews
Tags: Amateur, Canon