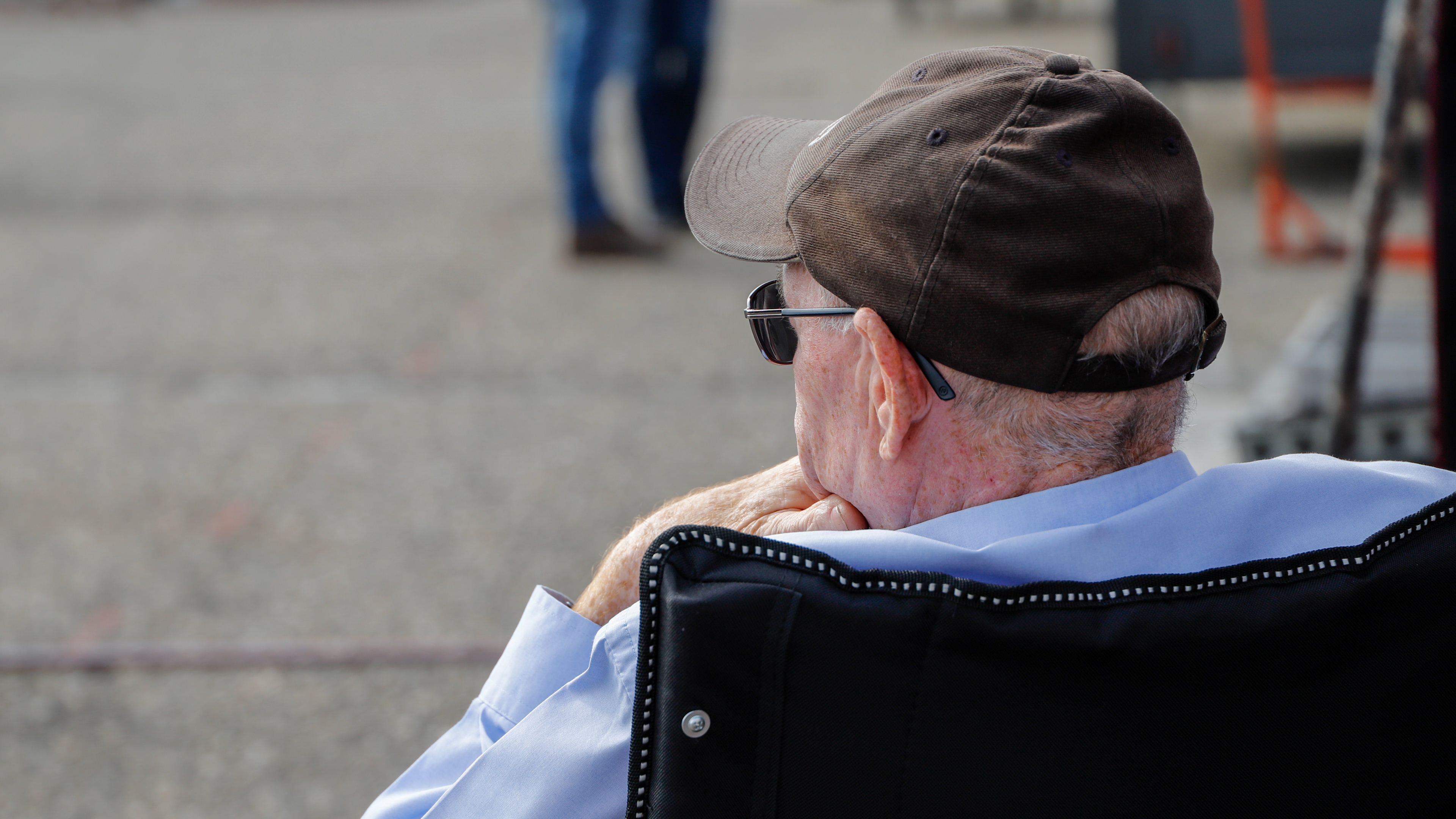 The Canon EOS 6D II is the new affordable starter in the Canon full-frame system. The camera offers the image quality that you expect from full frame. At the same time, it’s also a light camera. It is therefore very popular among photographers who are on the road a lot. 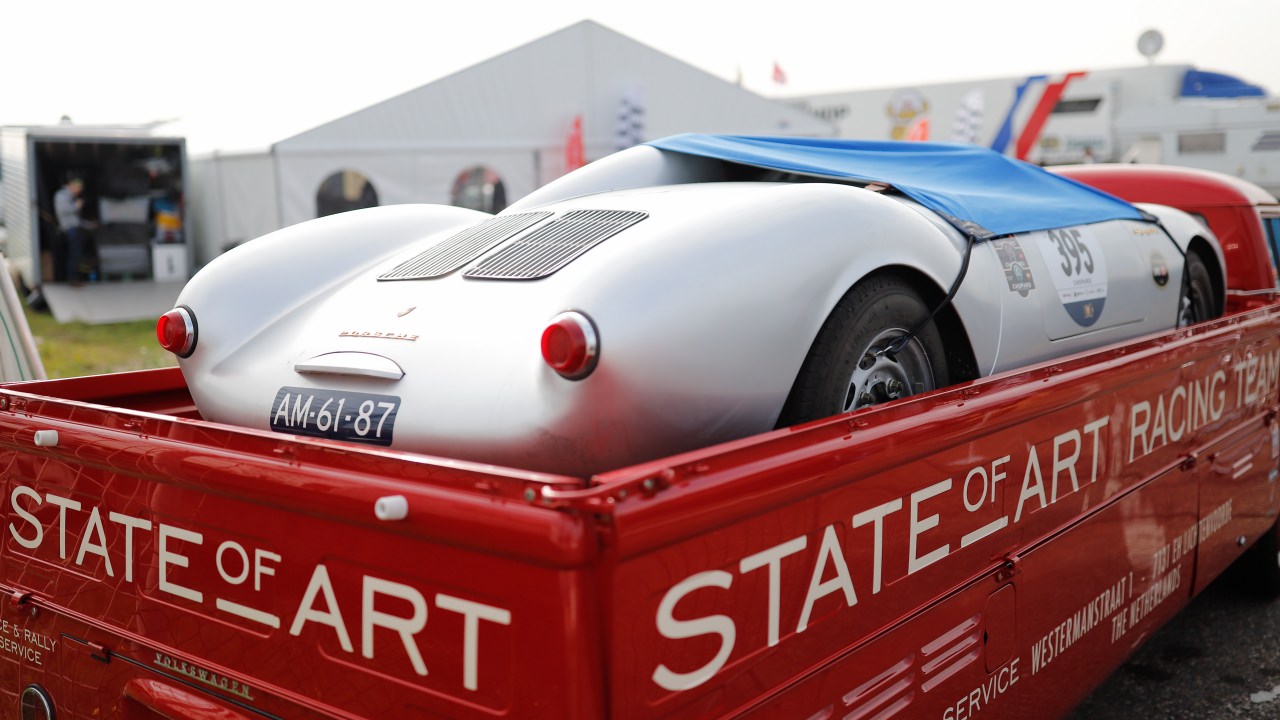 The original Canon EOS 6D was already five years old when it was replaced by the EOS 6D Mark II. Five years is quite old for a digital camera. Even so, the camera still sold well, thanks to a mix of qualities. The full-frame sensor offered good image quality and the ability to handle the depth of field very selectively. The price was favorable, and the weight of the camera was nice and low. All these qualities have been retained in the new Canon EOS 6D Mark II. Of course, Canon has not been idle all that time, and everything else about the EOS 6D Mark II has been updated. 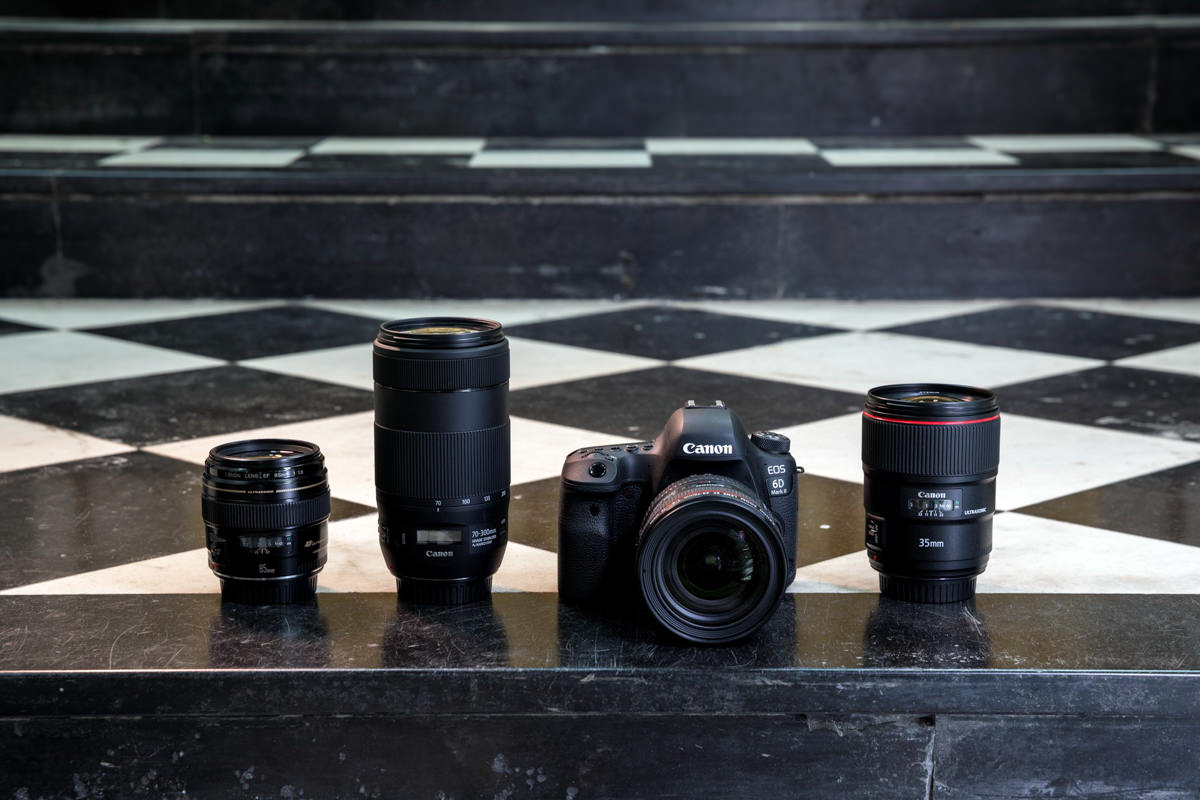 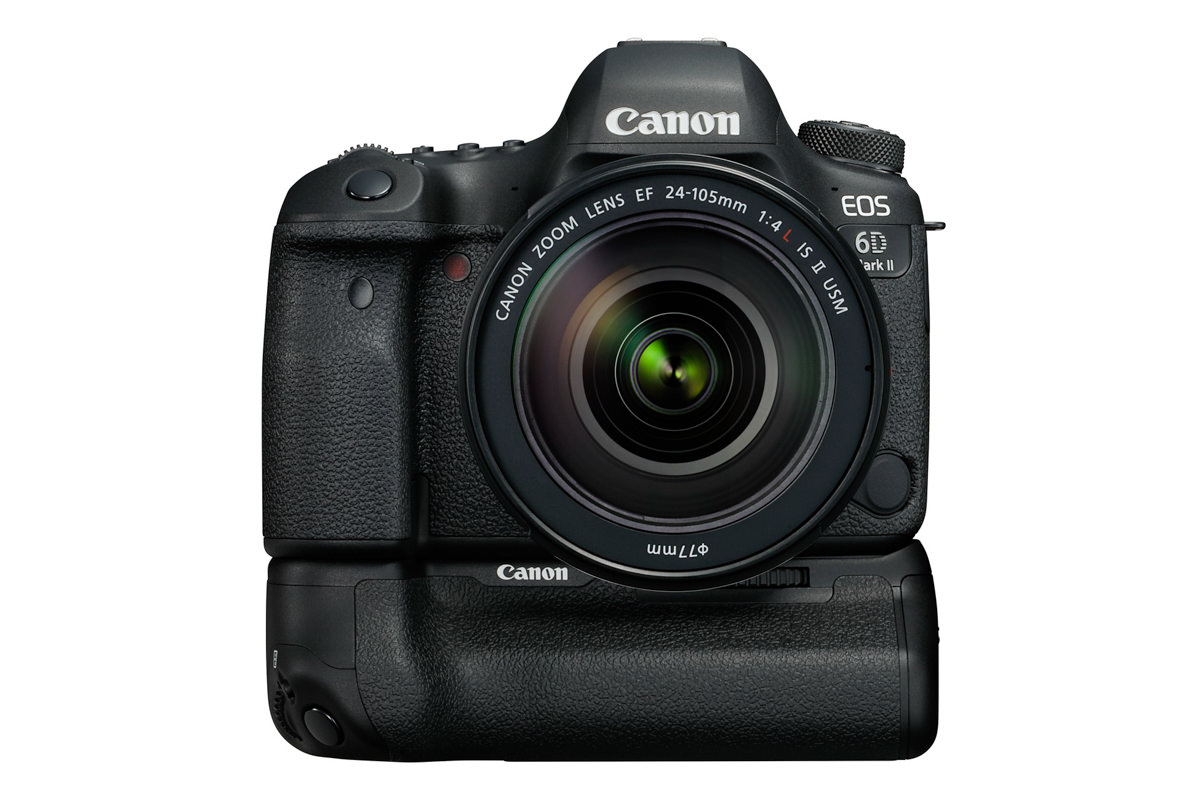 The EOS 6D Mark II is unmistakably a Canon EOS, with the fluid lines and good ergonomics that we are used to from Canon. In terms of build quality and placement of the buttons, the camera has more in common with the EOS 80D with an APS-C sensor than with the EOS 5D Mark IV. The 80D and the 6D Mark II are almost identical. The EOS 6D Mark II is slightly larger and has an extra button on the back for the direct enlargement of the image in playback. Like the EOS 80D, the 6D Mark II has a freely turning screen and a body that is largely made of plastic. The camera is slightly heavier than the original 6D, and it feels solid. It’s clearly a lot lighter than the 5D Mark IV, for example. Just like its big brother from the 5D series, the EOS 6D Mark II is sealed against dust and moisture. Compared to the EOS 80D, you notice you’re dealing with a full-frame camera as soon as you look through the viewfinder. That is a lot bigger than with the APS-C model. The viewfinder image shows 98% of the shot, unfortunately not 100%. Those who want that will have to save up for a model from the 5D series. The screen can turn and tilt, and it’s touch sensitive. You can use the touchscreen to operate not only the autofocus but also the menus, and that’s really nice.

The Canon EOS 6D Mark II has an autofocus system with 45 AF points that are also all cross-type. It is a fraction simpler than the EOS 5D Mark IV, but a big step forward compared to the 11 AF points of the original 6D. One thing to keep in mind is that the AF points are all in the middle, and to focus on subjects outside the center, you have to learn the “lock-and-recompose” technique. To do this, you place your subject in the middle, focus, hold the focus and adjust the composition to what you want. The camera focuses quickly and accurately on the most common subjects. The system can reasonably track moving subjects, as long as you keep them in the middle. However, the 6D Mark II is not a real sports camera, even though it reaches a speed of 6.5 images per second.

The EOS 6D Mark II also features Dual Pixel AF so that you can also use phase detection when focusing in live view. On the EOS 80D, that works very well for tracking subjects. On the EOS 6D Mark II, it seems slightly less precise. What you can use it exceptionally well for on the 6D Mark II is taking pictures with people in them. Face recognition works well with Dual Pixel AF. It is also very accurate because you use autofocus on the sensor. And of course it’s a godsend if you want to make videos with autofocus. Dual Pixel AF is one of the better focus systems on the market when it comes to focusing during filming. You can easily make a focus pull by touching another point on the screen, after which the focus slides very smoothly. The system is also pretty good at tracking subjects during filming. 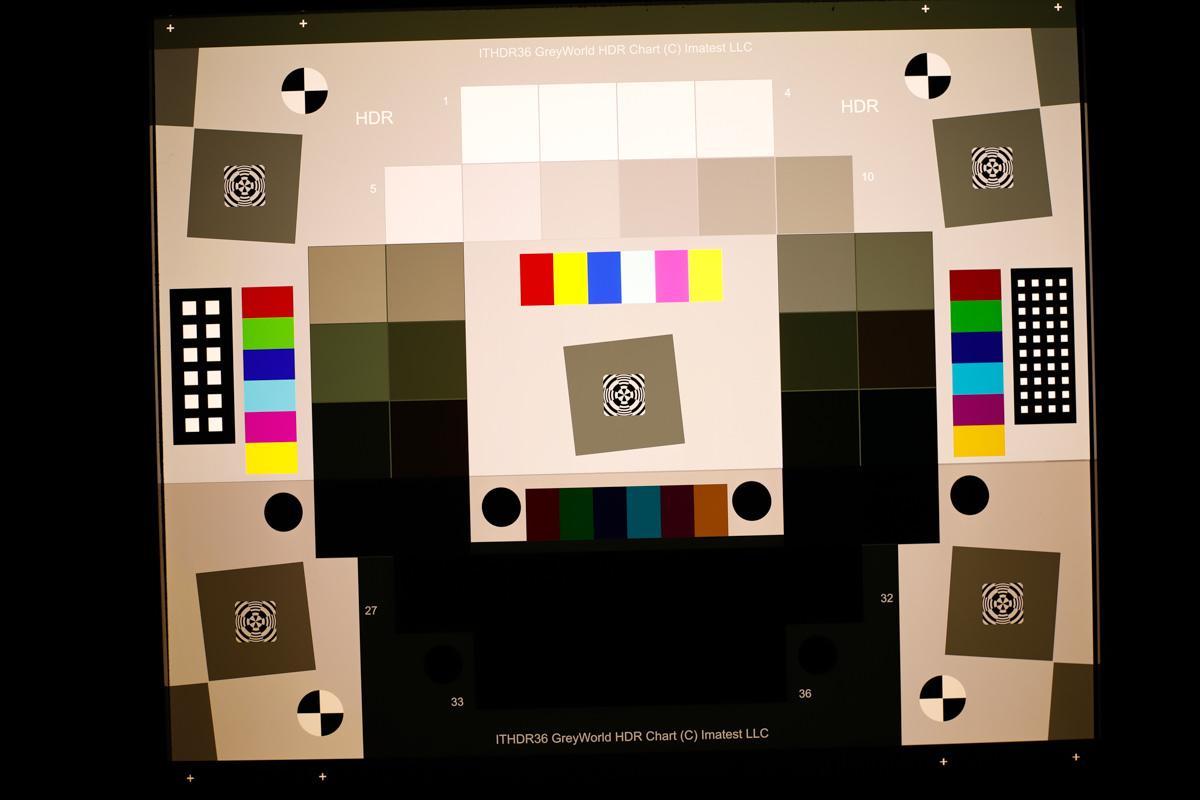 The EOS 6D Mark II has a new 26-megapixel sensor. That is 20% more than the old 6D had. The camera still has an antialias filter, so you will not soon be bothered by moiré. The filter is not very strong, though, so you can make optimal use of all those pixels. With the 6D Mark II, you can shoot detailed images, even though the difference in sharpness compared to the original 6D is small. The EOS 6D Mark II also performs pretty well at higher ISO values. The sensor produces very little noise, so you can shoot well in low light with the 6D Mark II. One point where the 6D Mark II lags behind the competition is dynamic range. Recordings with the 6D Mark II with Picture Profile Standard are beautiful in terms of color and contrast, with nice deep black shadows. As soon as you try to lighten those shadows in the post-processing, you notice that there is some room to maneuver here, but slightly less than we are used to with some other cameras, including those from Canon. 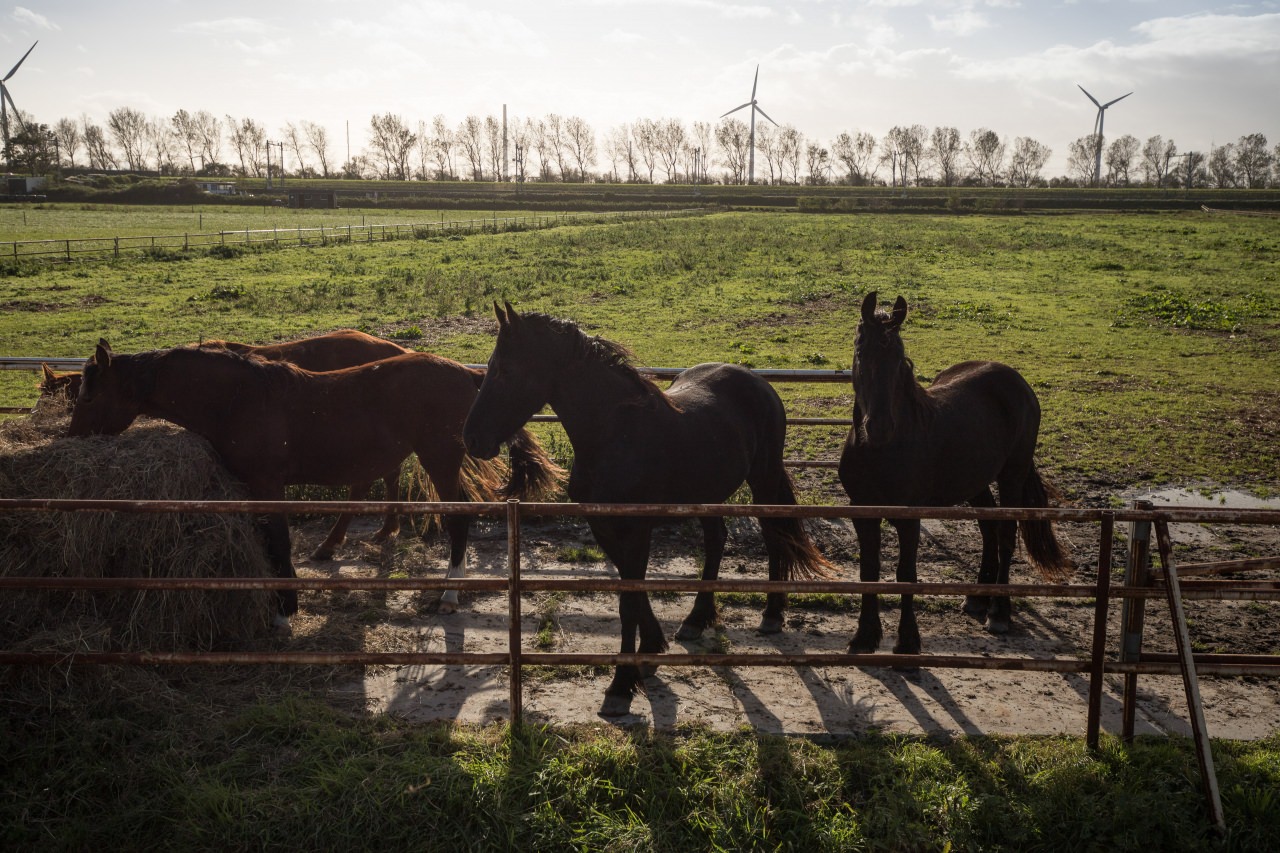 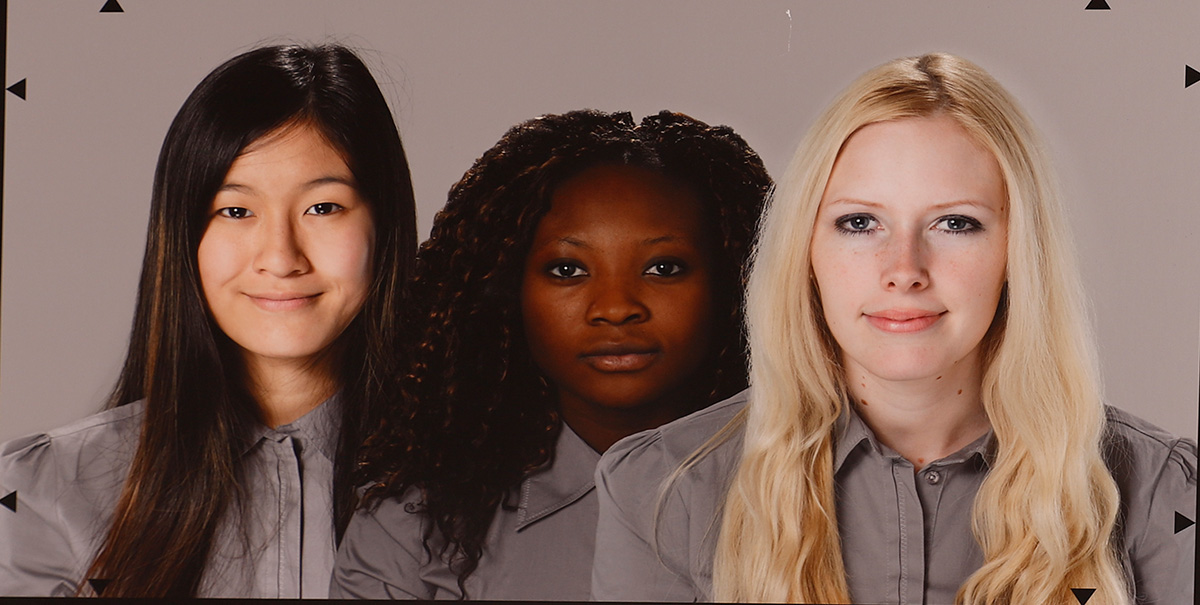 The Canon EOS 6D Mark II can film in full HD at 60 frames per second. The camera does not have 4K or advanced video capabilities like filming in log. This is not a camera for professional video work. Canon has other models for that. The camera does have electronic image stabilization on the sensor that, supplemented with the optical image stabilization of lenses that have that, ensures perfectly stabilized video. In combination with the good Dual Pixel AF, you can make great home videos with the 6D Mark II.

The Canon EOS 6D Mark II has both Wi-Fi and Bluetooth with NFC. This allows the camera to easily connect to Android smartphones. With iPhones from Apple, the process is just a bit more awkward, but it also works fast with that. With the updated Camera Connect app from Canon, you can download and share images as well as operating the camera remotely. For photographers who love to travel, there is also GPS on the camera, so you can geotag all your photos. This lets you to quickly see where each shot was made once you’re back at home. GPS obviously uses some extra power, but the 6D Mark II offers several options for setting the GPS. If you opt for slightly less accuracy, your battery will last longer. The EOS 6D Mark II also has a built-in time lapse function. This lets you easily create time lapse series in 4K. The EOS 6D Mark II also has an anti-flicker mode for shooting in artificial light. Those who often shoot in artificial light will have noticed that when using short shutter times, there can be big differences in the exposure. With the anti-flicker mode, the camera determines, based on the vibration frequency of the light, when the shot can best be taken. This ensures much better results in artificial light. 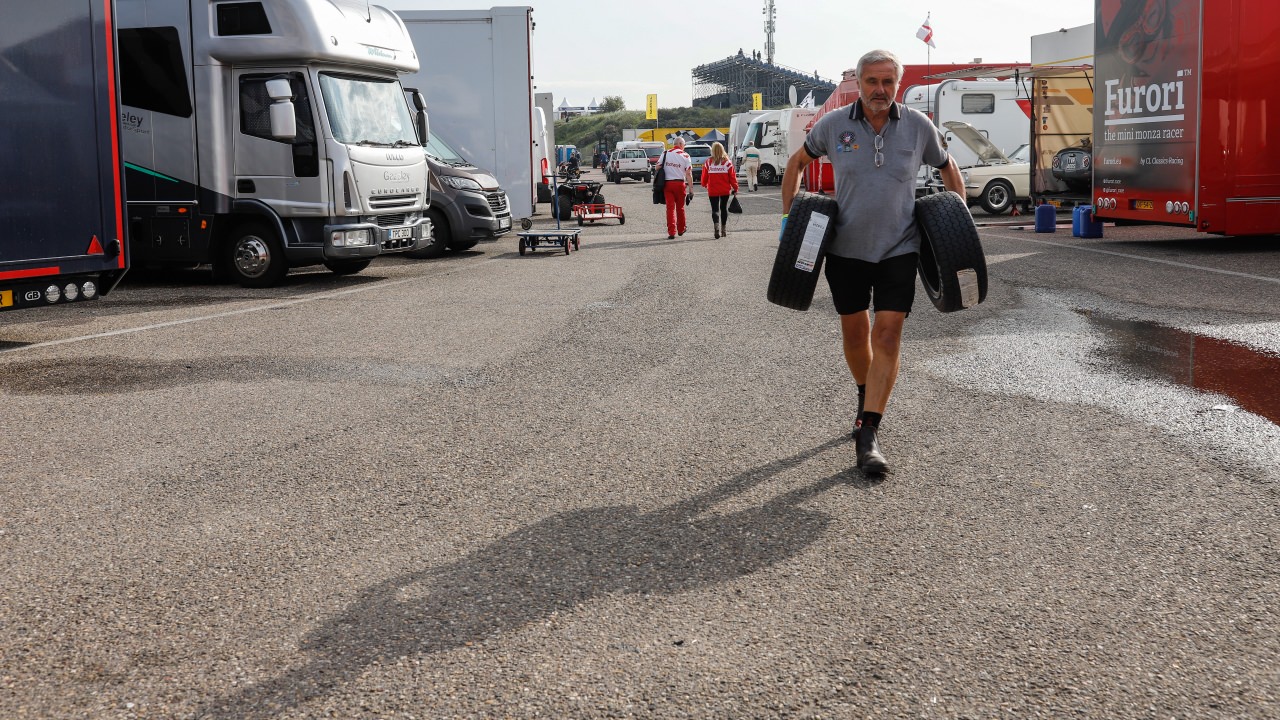 The EOS 6D Mark II is a nice camera for getting started with Canon’s full-frame system. In terms of operation, the 6D Mark II is very similar to the APS-C models from Canon, and that makes the switch from an 80D, for example, easy. The image quality is – except for on one point – exactly what you would expect from a full-frame camera. With the 6D Mark II, full frame lenses work as intended, and you can fully enjoy the limited depth of field and beautiful soft backgrounds that you get with a large sensor. The 6D Mark II is also a nice, light camera. It is therefore also a nice camera for photographers who are attached to full-frame but don’t want to drag too much along on vacation.