It appears from our survey that you do a lot of photography with telephoto lenses. That’s why we’re testing more lenses with long focal lengths. This Nikon 70-300 mm VR is one of our first test results. A couple weeks ago, we tested the Nikon 80-400 mm VR II lens, an outstanding lens with—unfortunately—a corresponding price tag. The Nikon AF-S VR 70-300 f/4.5-5.6G IF-ED is a much more attractively priced telephoto zoom, that like it’s big brother can be used on either FX or DX. The lens has a list price of 691 euro and yet is outfitted with lens elements made from ED-glass (Extra-low Dispersion) and the second generation of Nikon’s system for vibration reduction (VR II). 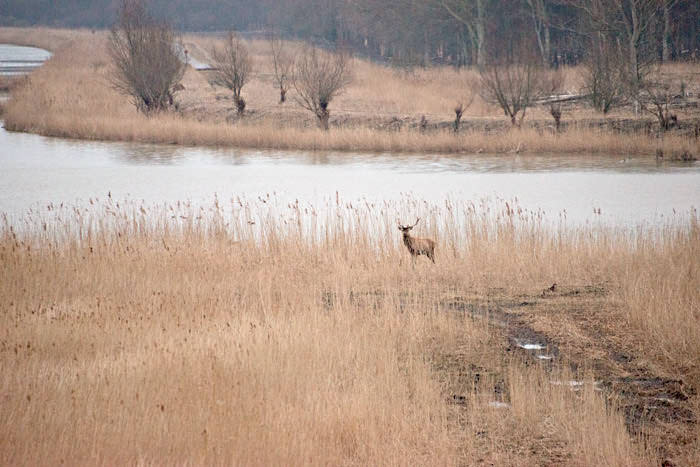 The 4.3x zoom range of this Nikon 70-300 mm zoom lens is ideal for nature shots. We unfortunately had very bad weather while we were making out test shots outside. 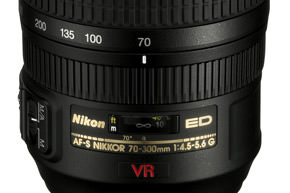 The lens has a complex design, which consists of 17 lens elements and a front lens of 67 mm. The wide zoom ring is closest to the camera body. In combination with a Nikon D5200, the lens is nicely balanced, even though at 745 grams it’s nearly 1.5x as heavy as the camera.
The construction of the lens is very solid, as we’re used to from Nikon. To save as much weight as possible, the lens housing is largely made of high-quality plastic. The lens mount is made of metal. The lens comes with a lens hood and a “Ballistic Nylon Lens Case,” but without a tripod collar.{insertgrid ID = 289}

Nikon cameras correct jpg files for chromatic aberration. It is a value of Nikon that this doesn’t only happen with Nikon’s own lenses, but also with lenses from other brands. All lenses are also corrected for vignetting. We carried out this lens test with the in-camera vignetting correction of jpg files set to Normal. We also corrected the jpg files for distortion. 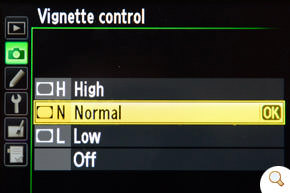 We tested the image stabilization of the AF-S NIKKOR 80-400 mm f/4.5-5.6G ED VR on a Nikon D800E with a focal length of 70 mm. Thanks to the SWM (Silent Wave Motor) and IF (Internal Focusing) the Nikon 70-300 mm delivers fast, and very quiet, focus. The internal focus ensures that the length of the lens remains unchanged and that the front lens does not turn during focusing. That’s nice when using a polarizing filter or a grey gradient filter. The AF-time can be shortened by using the Focus limiter switch. By eliminating the short-distance focus range, the AF goes through a much smaller distance and thus completes focusing more quickly.

The Nikon 70-300 mm delivers beautiful, sharp images at all focal lengths. Above 200 mm, the sharpness falls off, as it does with all consumer telephoto lenses. Even so, the most critical photographer will notice that the center sharpness at full opening and the sharpness in the corners from the Nikon 70-300 mm VR lager is lower than that from the Nikon 80-400 mm VR II. You get, with respect to resolution, more quality with the Nikon 80-400 mm, but you have to decide for yourself whether this is worth a couple thousand euro to you.

At full opening, you can encounter visible vignetting in some situations, as in the practice shot shown here. The vignetting in jpg files in the worst case, is less than 1 stop, which is partially attributable to the in-camera correction of vignetting by the Nikon D800E. But even in RAW files without in-camera correction, this lens does very well with the maximal 1.25 stops with a full-format sensor. Changing the aperture a little ensures that not only does the sharpness increase, but also that vignetting is eliminated. At f/8, it’s no longer seen. 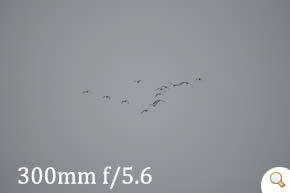 Even on a camera with an FX sensor, the distortion of the Nikon 70-300 mm VR is jpg files is so low that you will not be bothered by it in practice, regardless of the focal length that you choose. In uncorrected RAW files, the distortion is higher, but that’s easy to eliminate in Capture NX, Photoshop or Lightroom.
Move your mouse over the image for the distortion in RAW files. 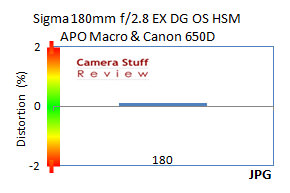 With this lens, it’s fun to play with the focal depth. The aperture is made up of 9 rounded lamellas, that deliver a beautiful bokeh. The bokeh is somewhat less quiet than it is with the more expensive telephoto zoom lenses from Nikon that we tested previously, such as the Nikon 70-200 mm f/2.8 or the Nikon 70-200 mm f/4. A light source in the background shows a small circle on the edge of the bokeh (move your mouse over the shot shown here). You only see that if you take shots with different lenses laid next to each other. See the Nikon 70-300mm VR review by Ken Rockwell for a large number of bokeh shots made with different Nikon lenses in the zoom range of the Nikon 70-300 mm VR. 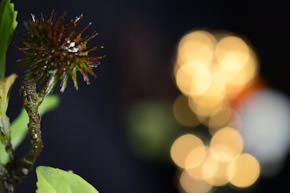 Nikon’s exclusive Nano Crystal Coating prevents virtually all flare and ghosts. In the practice shots, we didn’t encounter any flares or ghosts. In the studio, we only saw one flare and one ghost (marked with a white arrow) when a bright light source was directly in the image. In this aspect, the Nikon 70-300 mm VR is about as good as the more expensive Nikon telephoto zoom lenses. Very good, in other words.

Despite the application of two lenses made from ED glass, the RAW files in particular at longer (200 mm and higher) focal lengths have visible chromatic aberration in the form of blue and yellow edges at sharp contrast transitions in the corners of the image. Here you see a 100% crop from a RAW shot made at 300 mm f/5.6.
In this aspect, the Nikon 70-300 mm VR clearly performs less well than the more expensive Nikon telephoto zoom lenses. With Capture NX, Lightroom or Photoshop, chromatic aberration is quite correctable. 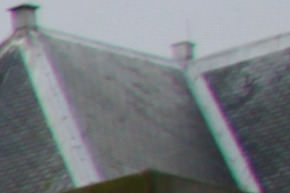 The scores of the Nikon 70-300 mm VR in this test are somewhat lower than the scores of the 80-400 mm VR II that we tested a couple weeks ago. But the differences are small and the price difference is big. By using longer focal lengths to sharpen your RAW files and remove the lateral chromatic aberration, you can somewhat reduce these differences.
For a static subject from a great distance, this is a very attractive lens with a high image quality and a convenient format. The very effective built-in image stabilization compensates well for limited brightness, so that you can also take sharp pictures in the dark. For active photography, a lens with a higher brightness, even without VR, is a better choice than the Nikon 70-300 mm VR.
Whomever decides to buy this lens will have a lot of fun with it, certainly if the weather is better than the weather we had during testing.