The Fujinon XF 18 55mm OIS is for sale since the end of 2012. It is the first zoom lens for the Fujifilm X-Pro 1 and Fujifilm XE-1 cameras. In terms of technology, this lens offers a couple of firsts: it is the first XF Fujinon lens with built in image stabilization and it is the first Fujinon XF lens with a linear autofocus motor. The new AF motor should deliver a faster focusing speed. When you consider price and construction this lens is by no means comparable with the cheap 18-55 kit lenses for cameras with an APS-C sensor offered by other brands. The Fujinon XF 18-55 mm is in the market for (semi-) professional photographers and photo enthusiasts. You will obtain this lens a few hundred dollars cheaper when you choose for the kit with the Fujifilm X-E1 camera. Perhaps, after reading this Fujinon XF 18-55 mm review, we can convince you that precisely this combination is an attractive offer. 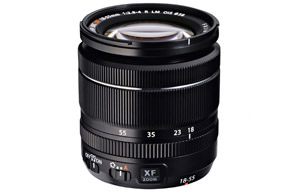 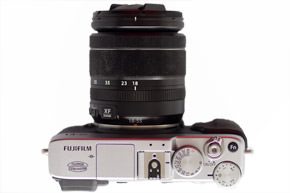 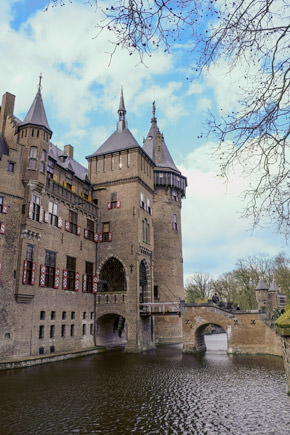 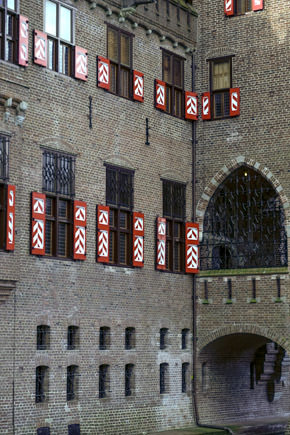 The field of view of a Fujinon XF 18-55 mm F2.8-4 R LM OIS lens on the Fujifilm X-E1 camera corresponds to FOV of a 28-85mm zoom lens on a camera with a full frame sensor. This is a frequently used focal length range and it also explains the popularity of 18-55mm kit lenses. Personally, I prefer lenses with an even wider view, with a focal length of approx. 24 mm (@ FF). Despite the slightly smaller maximum aperture (f / 4 instead of f/2.4) in comparison with the previously tested Fujinon XF 60mm macro, the Fujinon XF 18-55mm delivers a beautiful background blur. 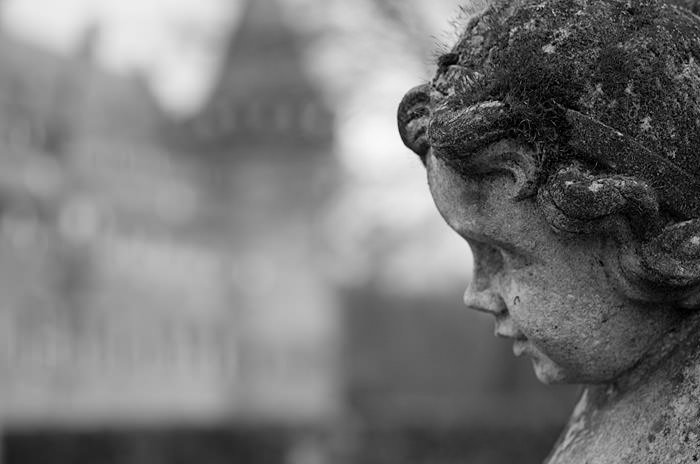 The body of the Fujinon XF18 55mmF2.8-4-R LM OIS feels very solid. Despite much metal is applied in the lens body, it´s not heavy, thanks to the compact dimensions, only 300 grams. The supplied petal-shaped hood is, in contrast to the hood of the Fujinon XF 60mm macro, not made of metal but of plastic.
If you zoom from a focal length of 18 mm toward 55mm, the lens will become about 2x as long. The front lens does not rotate,which is fine with the use of filters. On the lens there are two switches: one switch for the image stabilization and a switch that indicates whether the camera automatically sets the aperture (‘A’), or that you choose it yourself with the aperture ring on the lens. 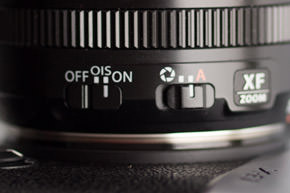 The aperture is set electronically using the aperture ring on the lens. The aperture ring has no number indication and does not stop at the minimum or maximum aperture. It takes some time to get used to that. You can have a look through the viewfinder or watch the screen to find out which aperture you have chosen. The lens offers no depth of field scale. Also that you get to see in the viewfinder / on the screen of the camera.
The new linear AF motor Fuji is an asset. The drive of the autofocus is quiet and runs very quickly, much faster than the AF of the Fujinon XF 60mm macro. 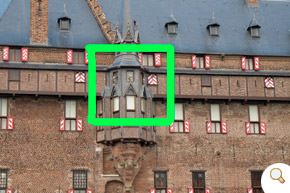 At most focal lengths, the sharpness quite constant from full aperture to aperture 11 and that is a very good performance. At a focal length of 55 mm the zoom lens performs as good as the Fujinon XF 60mm Macro. At a focal length of 18 mm, the sharpness of jpg files at the edges at all apertures (except at f/2.8, which I can’t expain)  lag behind the sharpness the center. For unprocessed RAW files this is not the case: there the sharpness at the edges is at all apertures almost as high as in the center. Perhaps this difference is due to the correction of distortion Fufi automatically applied to jpg files and RAW files that are opened with SILKYPIX, Lightroom or Photoshop. 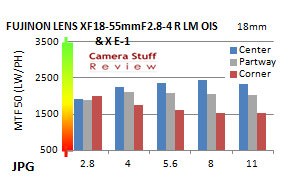 At a focal length of 18mm, there is a visible difference in center sharpness between f/2.8 and f/5.6. The sharpness at aperture 2.8 is good, but at f/5.6 even better, as you can see in this example. The sharpness is maximum at f/8, but the sharpness in the center is already very high at f/4.

See also the Fujinon 18-55 mm sample images on Fuji’s website, including a night shot of the Athenaeum bookstore and Café Hoppe in Amsterdam. 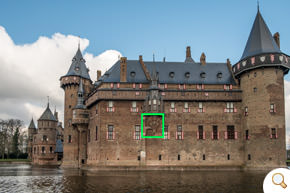 Fujifilm has chosen to, like Nikon, Olympus and Panasonic correct lens errors directly in the camera, without offering the users an opportunity to overrule that correction. Thus vignetting in the camera is automatically corrected when saving jpg files. The correction is very well done: over the entire zoom range, the vignetting is negligible. The correction is also stored in RAW files, so that RAW files opened with Lightroom, Adobe Photoshop’s RAW converter or SILKYPIX (that Fujinon X cameras included) over the entire zoom range are free of vignetting.
If you open a RAW file using a different RAW converter, you’ll see that this lens doea show actually more vignetting.

Also distortion is corrected in the camera when saving jpg files. The correction is very well done: over the entire zoom range the JPG files are distortion-free. The correction is also stored in RAW files, so that RAW files opened with Lightroom, Adobe Photoshop’s RAW converter or SILKYPIX (that is included with Fujinon X cameras) are free of distortion over the entire zoom range.
If you open a RAW file with a different RAW converter, you will see the usual standard zoom distortion changing from evident barrel distortion at a focal length of 18 mm to a pin cushion distortion at a focal length above 30 mm.

For a zoom lens on a camera with an APS-C sensor, this Fujinon XF 18-55 mm lens delivers a pretty good bokeh, even though you can see rings in the bokeh of a light source in the background.

The abbreviation EBC in the name of the lens, stands for Electron Beam Coating. Other lens manufacturers call this multi-coating. EBC is applied in order to minimize flare and ghosting as much as possible. Here Fuji has not completely succeeded. Using the supplied lens hood you can circumvent backlight in many cases. Use of the hood is therefore highly recommended. If a bright light source shines straight into the lens, it will reduce contrast, and you will see ghosts in the form of an aperture. In this image you can also see 14 arm sun stars arising from the 7 blade aperture. 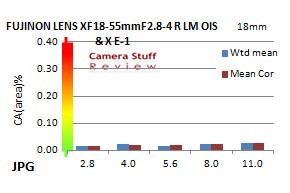 This lens is the first Fujifilm XF lens with image stabilization and a linear AF motor. Both are very good. The AF is very fast and the image stabilization is very effective. Fujifilm has chosen, like Nikon, Olympus and Panasonic, to correct lens aberrations in the camera, without offering the user an opportunity to overrule this correction. I believe that it has been a good choice. When you consider the image quality after correction, this lens can compete with the best lenses. Both for lenses on cameras with APS-C sensor and a full frame sensor. If it’s just about the image quality (sharpness, vignetting, distortion), then you don’t really need XF lenses with a fixed focal length between 18 and 60 mm, when you own the Fujinon XF 18-55 mm. Thanks to the 3 stops profit-  because of the effective built in image stabilization – you don’t need a faster Fujinon lens in low light. A kit of a Fujifilm X-E1 and a Fujinon XF 18-55mm not only looks very attractive. It also offers – at a reduced price – a very high price / performance ratio.