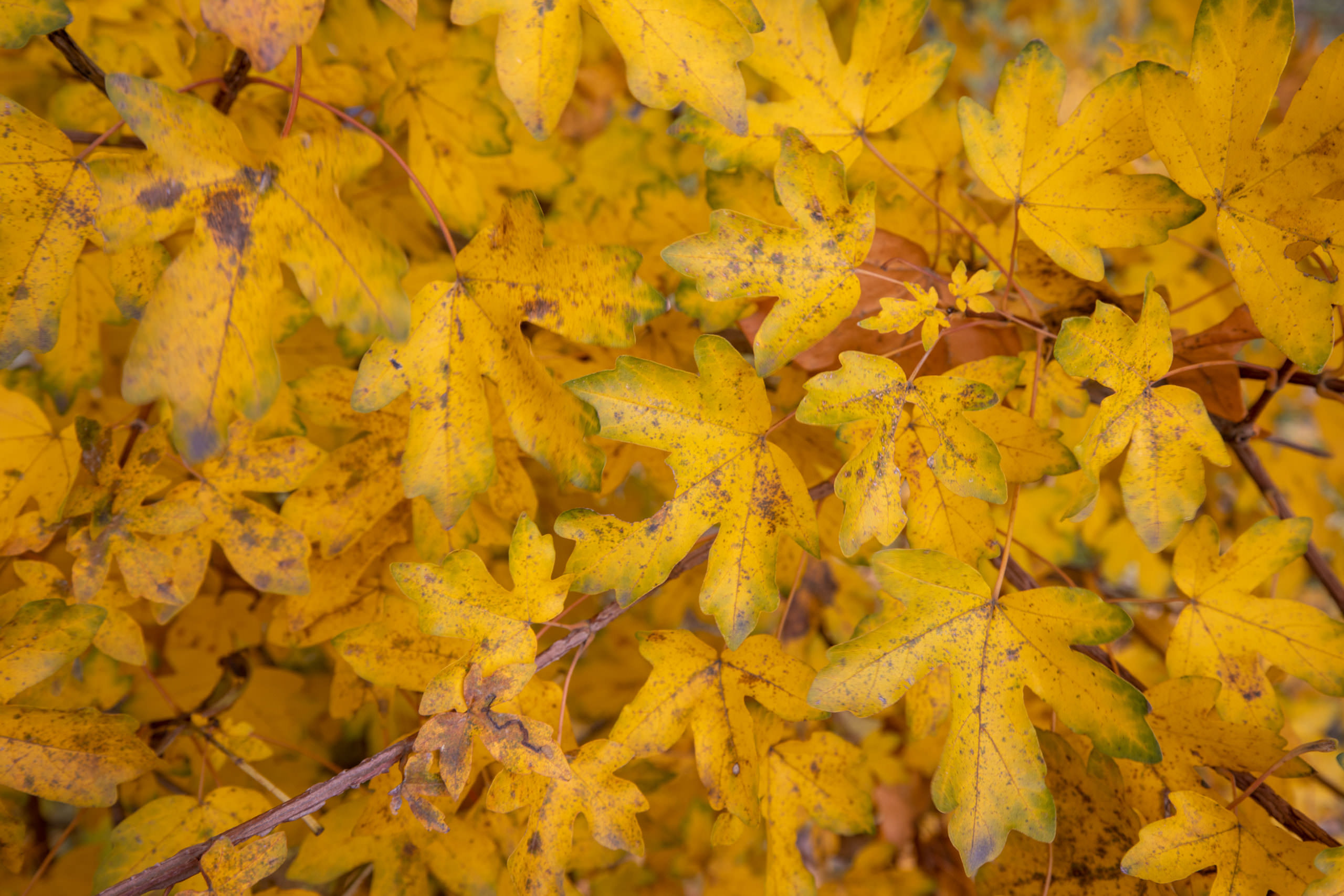 It is difficult to describe colors in such a way, that each apparatus (digital camera, scanner, LCD screen, printer) reproduces colors correct. Ever had a print with disappointing colors? Then you already experienced that transferring color information between different devices is not as easy and straightforward as you would like it to be.
There are several ways to describe a color (using “color models” and “color spaces”). Well known color models are CMYK (cyan, magenta, yellow and black), traditionally used by the press and RGB (red, green, blue) for cameras and LCD screens. Within the RGB model several color spaces exist, of which Adobe RGB, s-RGB and Prophoto RGB are most commonly known. The entire set of colors an apparatus can describe, is called an apparatus color space or gamut.

s-RGB is the standard color space on the Internet. Adobe RGB is a more modern color space than s-RGB and is able to describe more colors. Adobe-RGB is able to describe several green colors, which are more vivid (i.e. “more saturated”) than even the most vivid green (0,255,0) which s-RGB can describe. In practice most photographers use s-RGB in their camera. By doing this, they unnecessarily lose precious color information. The larger the gamut or color space of an apparatus, the more colors it can describe. Gamut helps to understand why color differences exist between your LCD screen and a printer. It also shows you the negative influence which the apparatus with the smallest gamut (camera, LCD screen, printer or printing service) in your workflow has on the quality of the final print.

Universal color space: CIE-LabThere is a model which can describe all the colors the naked eye can see and which is apparatus independent. Using this model, it is possible to obtain exactly the same color on your camera, scanner, LCD screen, printer. This is what actually happens when you perform your color management.The model is called CIE-Lab, and has been used in the previous images in order to show you the differences in color rendition by a LCD screen or a printer or the differences between several color spaces (s-RGB, Adobe RGB). CIE-Lab uses three variables (L, a en b) to describe all colors.
On the vertical axis (L) in the image to the left the lightness of a color is depicted. All the way to the top you will find pure bright white and all the way at the bottom pure black. On the horizontal axis the hue and saturation of the colors are described by a (which ranges from pre red to pure green) and b (from blue to yellow). 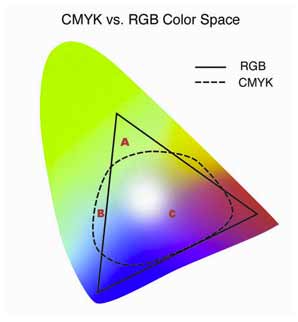 Most digital files, and many devices like for example your LCD screen, produce colors by mixing red, green and blue (RGB). Printers produce colors by mixing the ink of ink cartridges containing cyan, magenta, yellow and black (CMYK) ink. There are a few practical problems associated with these fundamental differences between RGB and CMYK.
In the image to the right you see a comparison of the CMYK color space of a printer (the soft cornered triangle with a broken line), with the RGB color space of an LCD screen (the triangle with a continuous line). Where the triangles overlap (C), both models are equally good in describing colors. But the brightest green (A) will only be described correctly by RGB. In order to reproduce a cyan color (B) correctly, the CMYK model is better. Because some colors, which do exist in the RGB color space, don’t exist in the CMYK color space (and vice versa) you lose color information as soon as you translate colors from RGB to CMYK (or vice versa). 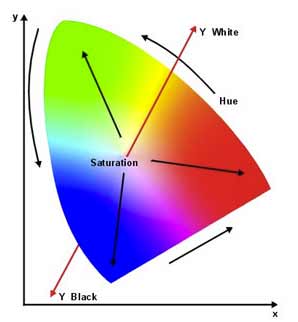 When you send a file to a printing service, the following could happen:

The most popular color spaces used in photography, s-RGB en Adobe RGB, are not equal. When you use 3 numbers for the mix of red, green and blue to describe a specific color, s-RGB and Adobe RGB will – in some cases – yield clearly distinct colors for identical RGB numbers (see the green patches in the image to the right). The Adobe RGB color space furthermore describes more colors than s-RGB; all colors that lie within the yellow triangle can be described by Adobe RGB. Only the colors within the black triangle can be described by the s-RGB color space. Pro-photo RGB is even better than Adobe RGB and describes all visible colors. Only professional camera’s offer you the possibility to store your images in the Pro-photo RGB.

CameraStuffReview uses a color chart to show you the color accuracy of cameras. CameraStuffReview tests camera color accuracy using Adobe RGB. Bruce LindBloom shows you at his Gretag Macbeth Colour Checker page why you can’t use the s0RGB color space: The color of the blue patch at the right of the color chart (nr 18) can not be described in the s-RGB color space (you would need – marked in red – a negative number to describe this number correct, whereas the RGB color spaces range from 0 to 255). The Adobe RGB is sufficiently large to describe all the colors of this color chart. 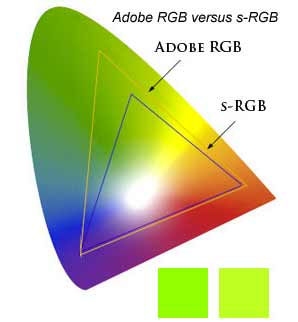