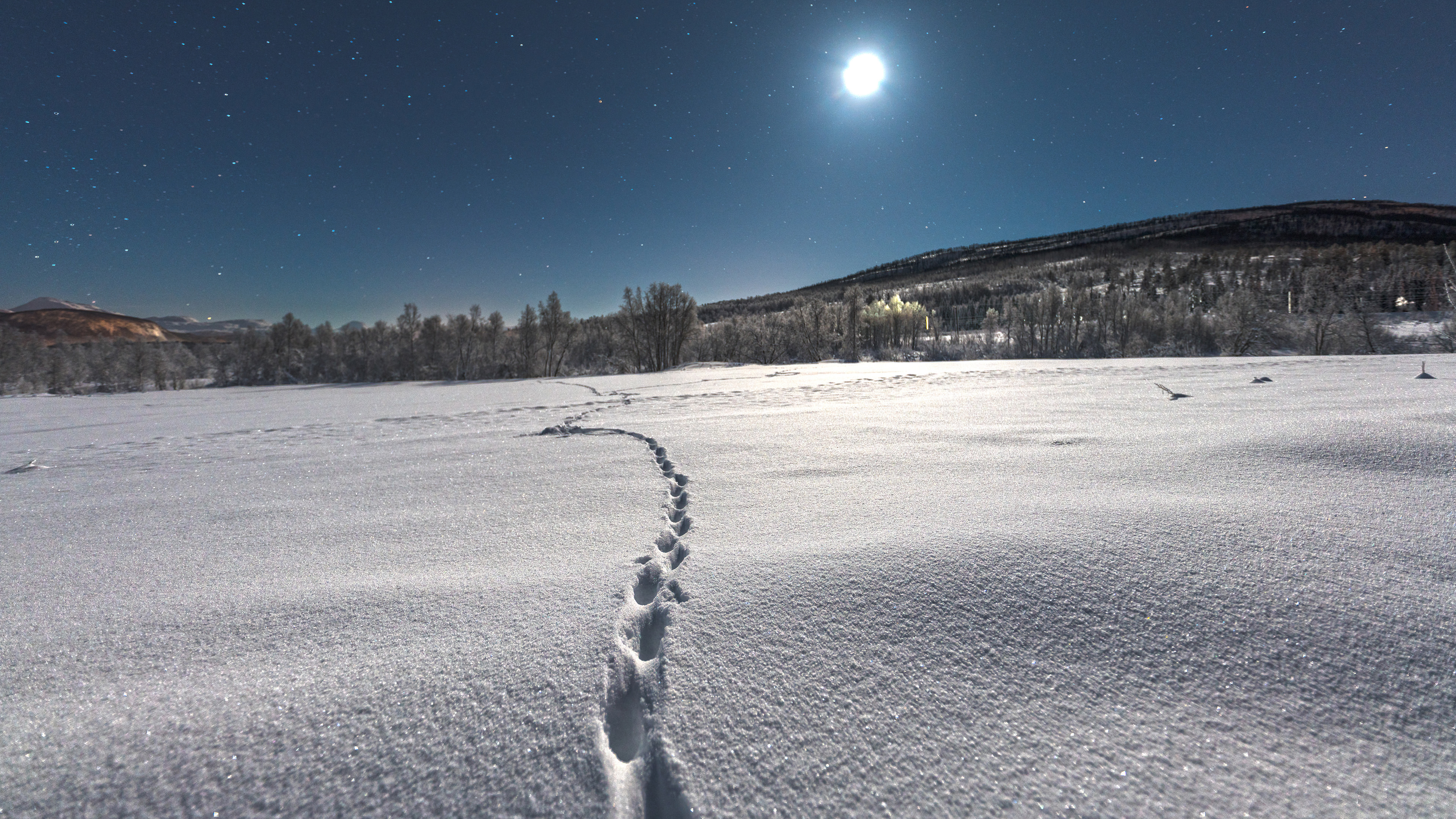 To double the resolution,
you need 4 times as many pixels 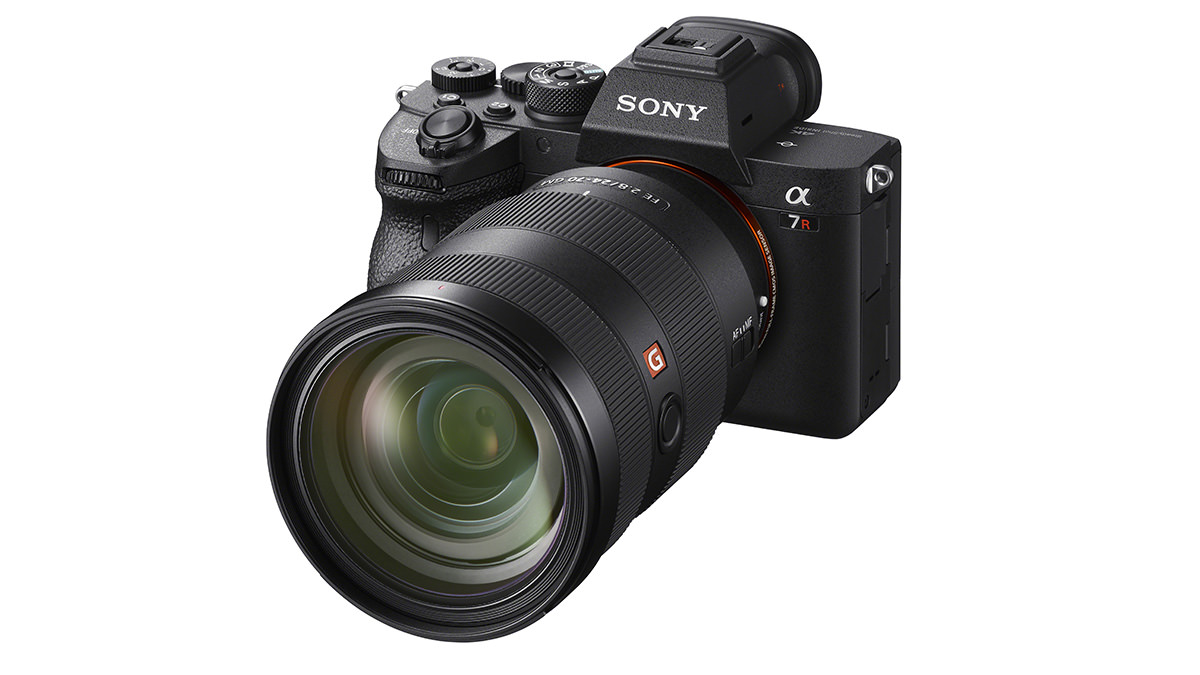 The higher the number of megapixels, the smaller the influence of an extra 10 megapixels on the resolution:

Since the arrival of the Canon 5Ds with its 50-megapixel sensor and the Olympus OM-D E-M5 mk2 with 40-megapixel, high-resolution shots, it seems as though the megapixel race has begun again. Do we see a difference between a shot made with a 36-megapixel camera or a 50-megapixel camera?

A few lenses good enough for a 50-megapixel sensor

At f/0.95, a good lens loses 1% in sharpness due to diffraction and perhaps 50% due to lens errors

Are modern lenses able to make the high resolutions of these new cameras visible? For an extremely good lens, the 50-megapixel full-frame sensor of the Canon 5Ds or Canon 5Ds R is no problem. More about that later. Perhaps even more interesting questions are: What do I have to do to realize the resolution difference between a 36-megapixel or a 50-megapixel camera in practice? Or: Is that difference worth the effort and the higher costs for me? And what do you think about: Do I see a difference in resolution in my photos if I use my current lenses?

There is a whole arsenal of lenses that actually produce shots with the Olympus OM-D E-M5 mk2 in the high-resolution mode with astronomically good resolution. But what is that like with a 50-megapixel, full-frame sensor? If you choose a camera with a 50-megapixel, full-frame sensor, you also have to replace a number of your lenses. Working from a tripod and focusing accurately become more important as the resolution of the camera becomes higher. Not every photographer wants to do that. So not everyone needs a 50-megapixel camera, either.

Whether you see the difference in sharpness between two pictures depends on:

Below you see two image excerpts from test shots with about 10% difference in resolution, shown at 50% of the actual size. With the naked eye, it is difficult to see differences between the two shots, despite the fact that these two image excerpts are significantly enlarged (the exact dimensions depend on the resolution of your screen). And you are viewing them from close-up!

If you are not checking pixels and you seldom make large prints, then it probably does not make much sense for you to choose a camera with more than 24 megapixels. How great the difference in sharpness is that you see with the naked eye differs per person. With direct comparison of two pictures next to each other, you can assume that most people will see a difference of 20% in resolution. If you view photos on a screen at 100%, then you can see that a Canon 5Ds has higher resolution than a Canon 6D or 5D mk3. The comparison of a Canon 5Ds with a Nikon D810—even at 100%—is much more difficult.

Try it yourself: If you sharpen in Photoshop with Unsharp Mask in two steps (first radius 0.8 pixels, 85%, and then a radius of 20 pixels, 10%), then the shot looks visibly sharper and more natural than when you only sharpen the micro-contrast (radius 1) or the global contrast (radius 20).

Our eyes experience high contrast—a large difference in brightness between the darkest color and the lightest color of something we are looking at—as sharp. Sharpening software does nothing more than increase the contrast of a shot in a very clever way. Photo editing programs often distinguish when sharpening between the global contrast of a photo (the difference between the lightest and darkest point in the whole photo) and the detailing (local contrast differences, also called micro-contrast).

The finer the details, the lower the contrast.

Our eyes experience an image as sharp if the contrast is high and the details are clearly visible (“micro-contrast”). A silhouette of someone on a sand dune (high contrast) is sharp, but in this case contains little detail. A fine pattern of branches or leaves made with the same camera and lens at the same focal length and the same aperture as the shot of the silhouette on the sand dune has a high resolution, but looks less contrast-rich than the silhouette. If the pattern becomes even finer, like individual grains of sand in the sand dune, then we no longer see the contrast difference. If you view details at the limit of what a lens or camera can handle, then you will be squinting in dark glasses with extremely high resolution and extremely low contrast.

At f/4, the loss of sharpness due to diffraction is 20 to 35 %.  Sometimes, lens errors have an even effect than diffraction.

There are different ways to measure resolution. Colorfoto measures, for example, the resolution at which the distinction between black and white is practically invisible (MTF10: the difference between the darkest and the lightest color is just 10%). This will also be identified as “vanishing resolution,” and this measurement value comes the closest to the number of pixels on the sensor (sometimes identified as the Nyquist frequency). Because our eyes experience the combination of contrast and details as sharp, only determining the vanishing resolution is not sufficient if you want to know whether a lens is sharp or not. Colorfoto therefore also measures the global contrast.
Most lens testers (including CameraStuffReview) use the MTF50 (MTF50: the difference between the darkest and the lightest color is 50%), because it is assumed that this contrast measurement correlates best with the sharpness that the human eye experiences. That corresponds with our experiences: a photo made with a lens with a high MTF50 looks sharper than a photo made with a low MTF50. If all other conditions—test camera, distance to the subject, shutter time, aperture, ISO, etc.—are otherwise the same, of course.

What resolution does a lens have to be able to handle in order to let the resolution of a Canon 5Ds R come fully into its own? At least a vanishing resolution that is equal to the number of line pairs per mm of the sensor (0.5*5792 pixels/24 mm = 119 lp/mm). More is better, of course. But how do we know that a lens has such resolution, when this is the first 50-megapixel, full-frame sensor?
If we limit ourselves to center sharpness, then we can find the answer in the near future with lenses tested on the Canon 750D/760D (with AA filter: 134 lp/mm). Because the Canon 5Ds R corresponds as far as pixel density is concerned with a Nikon D7200, and neither camera has an AA filter, it is not crazy to assume that the best lenses on a Canon 5Ds R can come out at a resolution of 115 lp/mm or more. Hence the title: 50 megapixels is not enough.

Diffraction and resolution (in lp/mm)

Diffraction is a natural phenomenon: light becomes more scattered as the opening it passes through becomes smaller. In terms of diffraction, you make the get the sharpest picture at f/0.95 and the least sharp picture at f/22. With a pinhole camera, the aperture is so small, not seldom f/100, that the light is spread out over multiple pixels. You therefore never get a sharp picture with a pinhole camera.
If you take the size of the pixels and the influence of diffraction into account but do not consider lens errors, then the resolution of a camera is simple to calculate for every aperture. You see the results in the illustration above.
At f/0.95, a lens without lens errors and a camera without an AA filter would produce the same vanishing resolution (MTF10) as the number of rows of pixels on the sensor. A Canon 760D (sensor height: 14.9mm; 134 lp/mm) or a Nikon D7200 (sensor height:15.4mm; 130 lp/mm) both have a sensor with a height of 4000 pixels. At f/0.95, the influence of diffraction on the resolution is negligible, and a lens without lens errors would be able to deliver a resolution of 132 lp/mm (Canon) or 128 lp/mm (Nikon). That is higher than the 119 lp/mm of the Canon 5Ds or the 101 lp/mm of the Nikon D810. The very best lenses on a camera with a full-frame sensor do not achieve, expressed in lp/mm, such high values. On a Nikon D800, with a 36-megapixel sensor, the Sigma 105 mm f/2.8 macro reaches a vanishing resolution of 92 lp/mm (2200 line pairs per picture height). On the Nikon D7100, the Tokina 70-200mm F4, in a recent test by Colorfoto at a focal distance of 70 mm and f/8, achieved a resolution of 1800 line pairs per picture height, which corresponds with 117 lp/mm. In both cases, the sensor can still be a limiting factor. They probably score higher if you test them with a 50-megapixel, full-frame sensor. 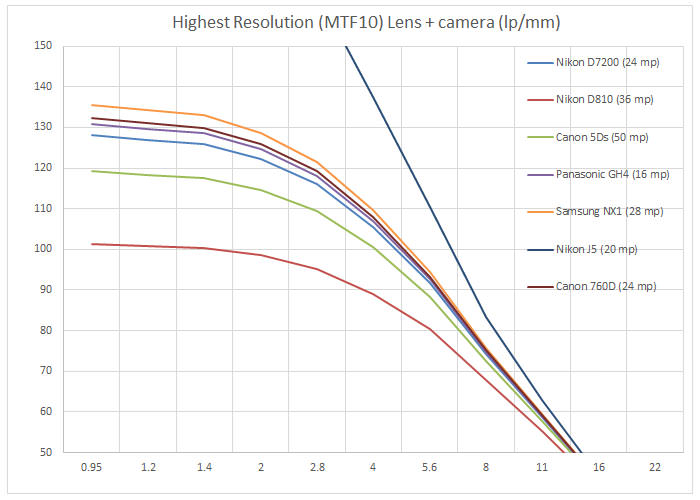 For Lenstip and CameraStuffReview, the MTF50 of unsharpened RAW files is measured; that is lower than the vanishing resolution (MTF10) that Colorfoto reports. CameraStuffReview uses lines per picture height (I will come back to that.), and Lenstip reports measurement results in lp/mm. Lenstip makes heavier demands of the cameras with a smaller sensor:

Even if you take into account the unusual 3:4 format in comparison with the 2:3 format of a full-frame sensor, it seems unfair to set higher requirements for a smaller sensor than for a large sensor. Calimero would protest: “They are big and I is small and that is not fair, oh no!“. 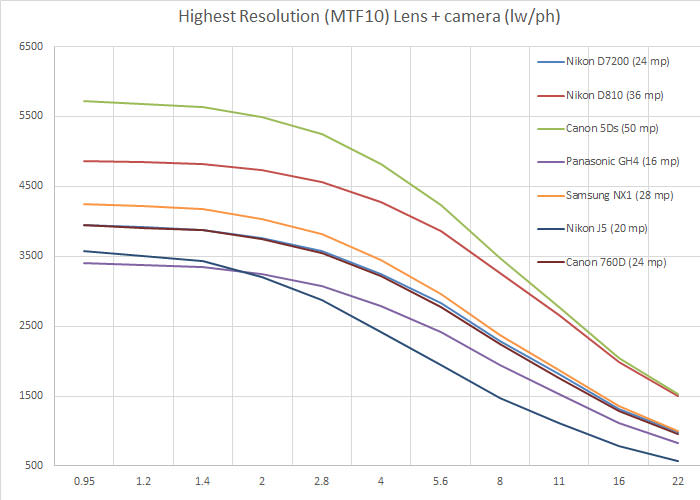 f/11 gives great focal depth, but diffraction costs you 50% of the sharpness

In theory, an ideal lens without lens errors at f/0.95 on a sensor without an AA filter would have the same vanishing resolution as the height of the sensor (5792 pixels). But an ideal lens does not exist. In practice, most lenses are not entirely sharp at full aperture. By stopping down a few stops, you eliminate the lens errors and achieve the highest possible sharpness. The sharpness subsequently decreases as a result of diffraction. How relevant are the resolution differences that you see between the different cameras in the picture above?

Judge for yourself: You see a 20% difference in resolution with the naked eye

f/16 and f/22 are better avoided if you want center sharpness. Unless you need a great deal of focal depth. 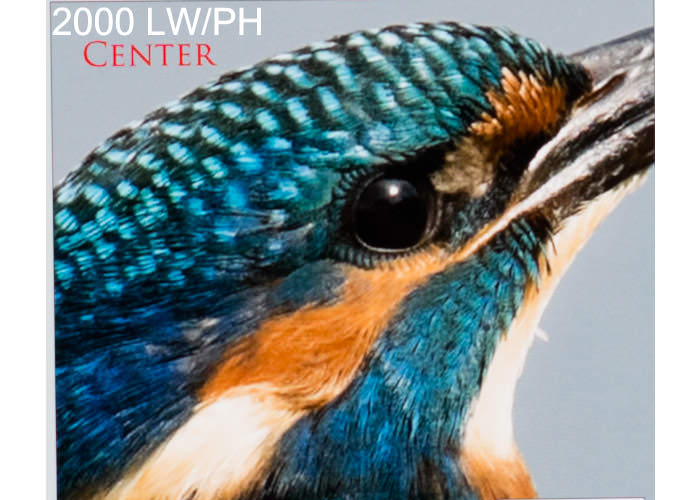 Hopefully, based on the explanation above, it is clear why bright lenses are so often renowned for the high sharpness that they offer at f/4 or f/5.6. If you stop down two stops with an f/1.4 lens, then you have significantly reduced most of the lens errors, while the negative influence of diffraction is still relatively minor. That is why the most modern bright lenses, like the Sigma 18-35 mm f/1.8 Art (for cameras with a DX or APS-C sensor) or the Sigma 35 mm f/1.4 Art (for full-frame/FX) are ideal candidates for demonstrating the high sharpness of 24-megapixel APS-C cameras or 50-megapixel full-frame cameras. In the center, since very few lenses manage to achieve the same sharpness in the corners as in the center at these kinds of extremely high resolutions.

Only extremely good, but less bright (f/4, f/5.6) modern lenses are so well designed that they produce the highest sharpness even at full aperture. As far as the center sharpness is concerned, you do not have to choose a smaller aperture with these lenses. We saw that when testing the Sigma 24-105 mm f/4 Art DG OS HSM, Nikon AF-S DX 18-140 mm f/3.5-5.6 G ED VR, Canon 24-70 mm f/4 IS and the Tokina 70-200 mm F4. The center sharpness of these modern lenses is maximum at full aperture and only decreases as a result of diffraction as you stop down. For the corners, it is sometimes a bit more nuanced: the sharpness in the corners usually still increases a bit if you stop down 1 or 2 stops.